Accessibility links
When The Beat Was Born: Hip-Hop's Big Bang Becomes A Kid's Book : Code Switch There was a time when adults found this music exasperating and outright dangerous. Now it's getting the first-Thanksgiving treatment.

When The Beat Was Born: Hip-Hop's Big Bang Becomes A Kid's Book

When The Beat Was Born: Hip-Hop's Big Bang Becomes A Kid's Book 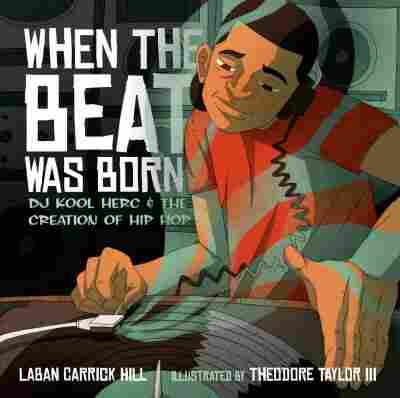 When the Beat Was Born

DJ Kool Herc and the Creation of Hip Hop

By now, the origin story is pretty well-known. Back in the early 1970s, a crew of kids of color in the South Bronx threw a bunch of parties where they plugged their turntables and their huge, 6-foot speakers into streetlight posts. They took the breakbeats from popular dance songs and rhymed aloud over them. Those parties were, in effect, hip-hop's genesis.

Forty years later, hip-hop is just youth music, with all of its signifiers and stylings and subgenres translated and remixed around the world. But how do we pass down that creation myth? The way we so often do it: with a children's book.

When the Beat Was Born: DJ Kool Herc and the Creation of Hip Hop looks at the early life of the deejay widely credited with creating hip-hop. (Like so many books about history, the details of the depicted events are hotly contested.)

Earlier this week, its illustrator, Theodore Taylor III, was awarded the Coretta Scott King/John Steptoe New Talent Award by the American Library Association for his artwork in it.

For those of us who grew up at a time when adults found this music that we loved so exasperating and outright dangerous, the fact that hip-hop's Big Bang is getting the first-Thanksgiving treatment might be a little discomfiting.

The path from new music to Muzak is well-worn, of course. Jazz went from a deeply racialized menace to a symbol of bourgeois sophistication; the Boomer rock icons have aged into quaint, harmless grandparents. (DJ Kool Herc himself ain't exactly a spring chicken: hip-hop's daddy has long been old enough for AARP.)

Twenty-eight-year-old illustrator Taylor, himself a huge hip-hop fan, is less than half Herc's age. He started listening to hip-hop way after its founder's heyday.

Theodore Taylor III was given an award by the American Library Association for his artwork in When The Beat Was Born, a children's book about hip-hop's origins. Roaring Brook Press hide caption 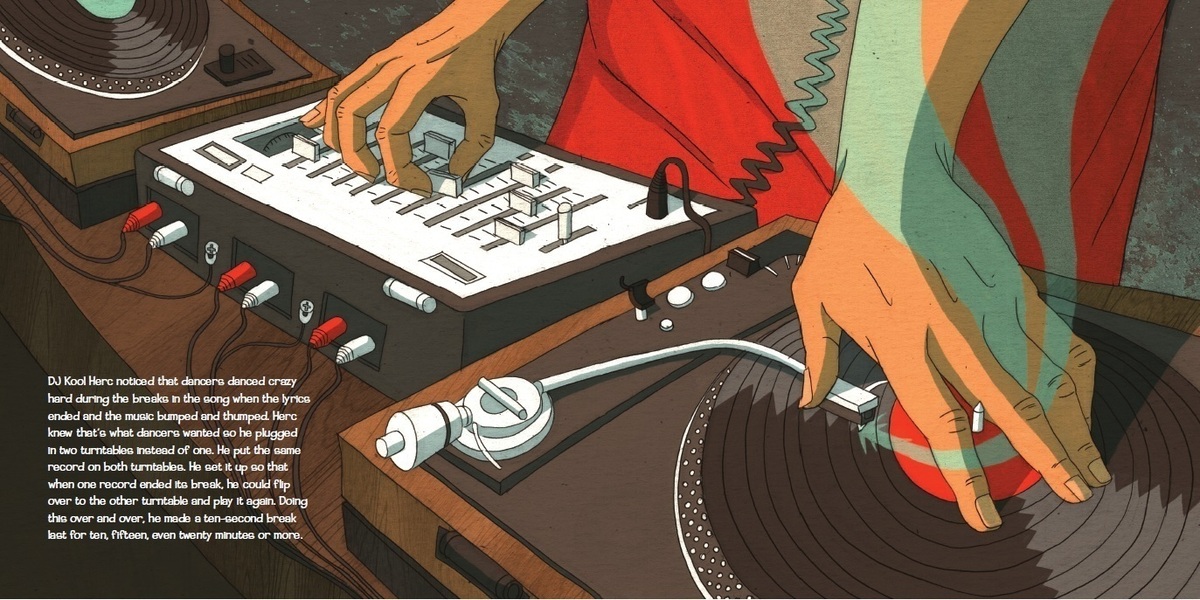 Theodore Taylor III was given an award by the American Library Association for his artwork in When The Beat Was Born, a children's book about hip-hop's origins.

He told me that the soundtrack to Men In Black was the first hip-hop he ever loved, somewhat sheepishly. I laughed and teased him about it. He laughed too, and defended himself, good-naturedly.

"Nas is on there, A Tribe Called Quest," he said. "It's actually a really great album. Before that, I didn't really listen to a lot of hip-hop because my parents were worried about language and that stuff."

Taylor was tapped to work on When the Beat Was Born because of his work on album covers and posters. And while he was familiar with Herc's work, he had to do some digging to help get a sense of what Herc looked like back in those early days. "There aren't a lot of images of him from that period," Taylor said. He eventually found some old footage of Herc performing, and worked from there.

The book is only 17 pages long, but it includes a bibliography of writing on hip-hop's beginnings. (Herc had no involvement in creating the book, Taylor said.)

Before this project, Taylor hadn't done any illustrating for children's books. But now, he says, this is what he wants to focus on going forward. "I was pretty honored to have a book about him be my first children's book project since hip-hop is a pretty big part of my life," Taylor said.

"I think it's pretty important that people understand the origins," Taylor told me. "It's hard to really understand the culture or the music without understanding where it came from."