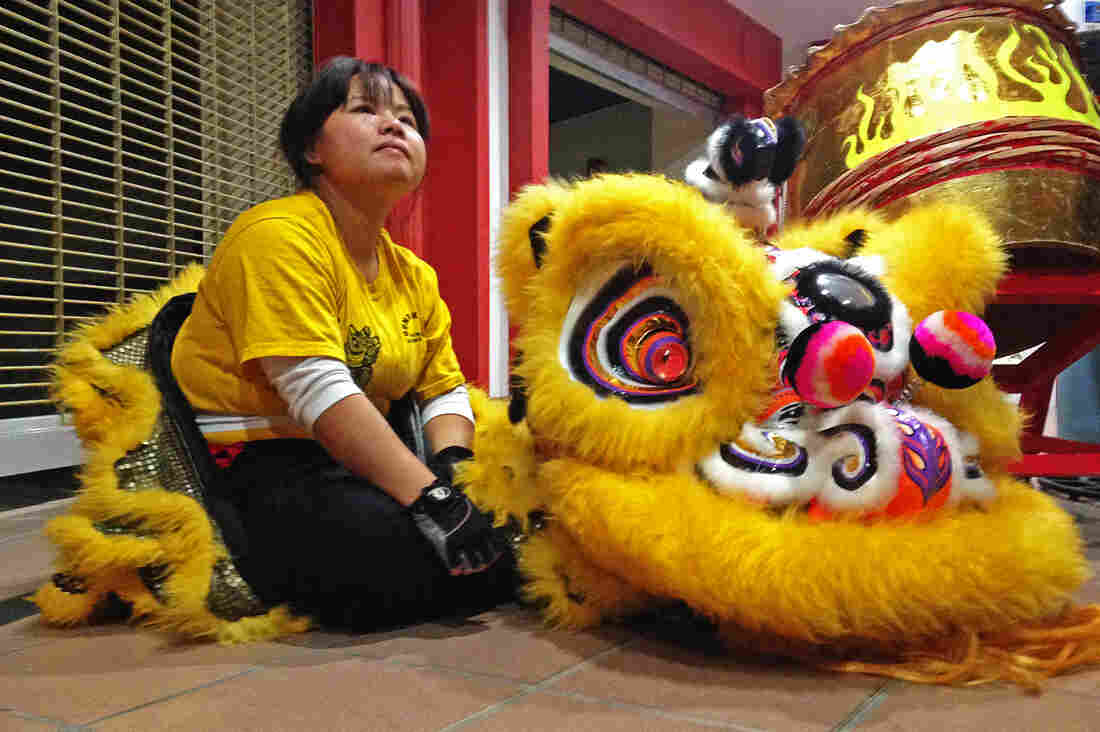 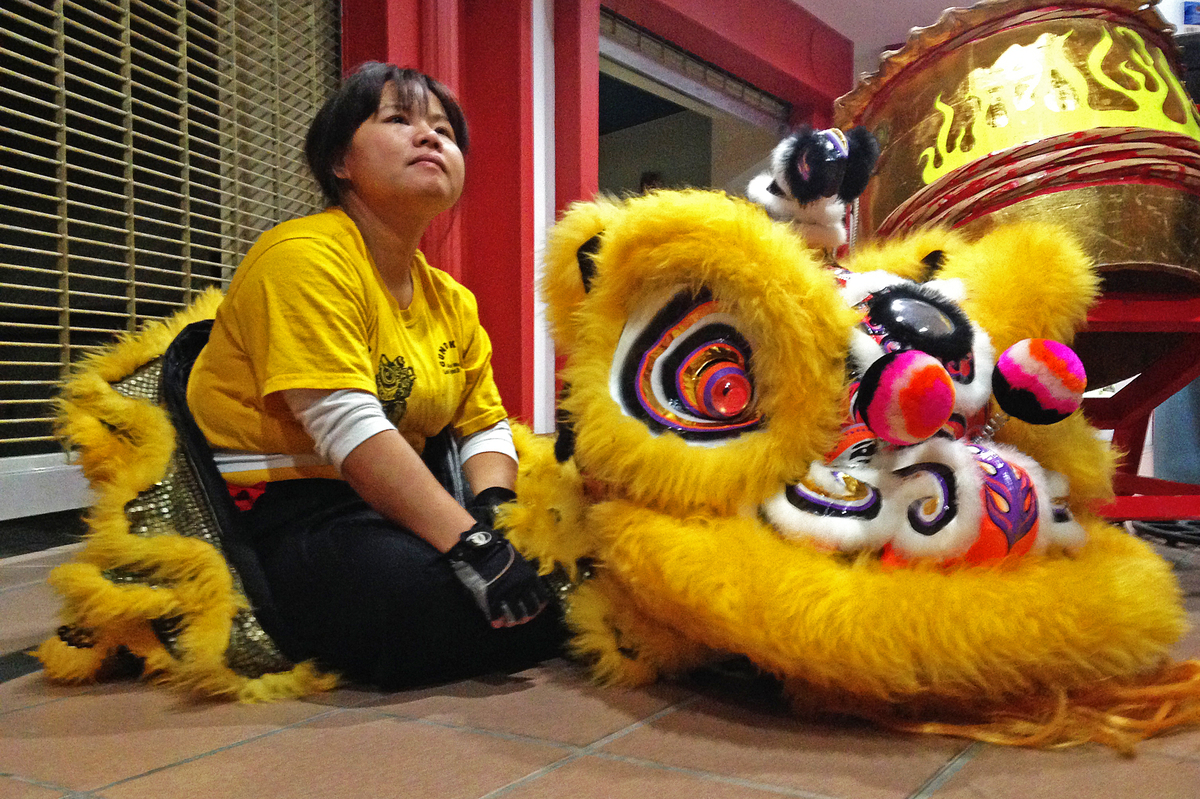 Gund Kwok troupe member Heang Ly takes a break next to her lion costume during a rehearsal in Boston's Chinatown.

Lion and dragon dancers are set to parade down Chinatown streets around the country again with the Friday start of another Lunar New Year.

You've probably seen these traditional dance troupes in Lunar New Year celebrations, performing gymnastic feats under papier-mache lion's heads, and swaying cloth dragons aloft on poles – all to the pounding rhythms of cymbals and drums amidst a flurry of crimson firecrackers.

But Reverend Cheng Imm Tan's troupe is redefining the Lunar New Year tradition. She formed a troupe in Boston almost 16 years ago under the name "Gund Kwok," Cantonese for "heroine."

"I think everybody thought [at first], 'Oh! What a cute idea! Let's give it a try.' I don't know that anybody expected us to last this long," Tan says. "We're still turning heads. People are like, 'Wow! They're women!' "

More than two dozen Asian-American women from their mid-teens to their late fifties make up Gund Kwok's ranks, performing a Chinese martial art that was traditionally reserved for men. 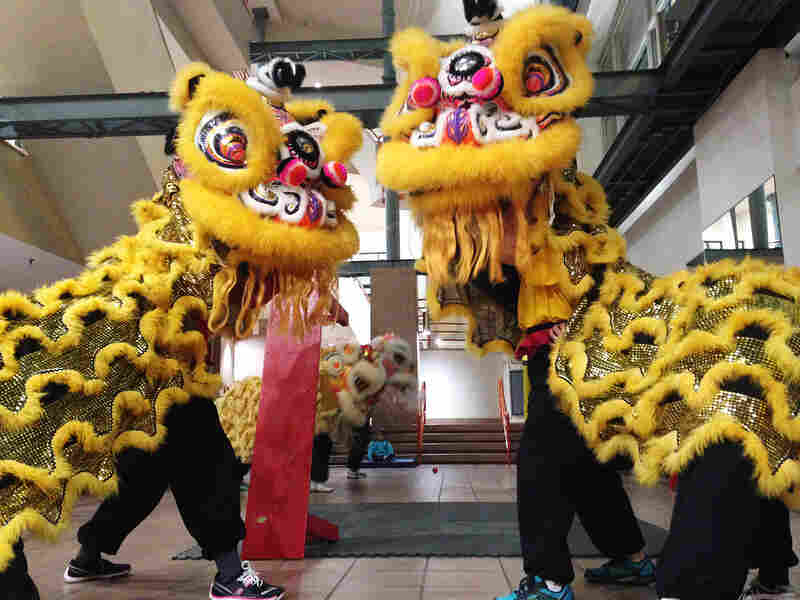 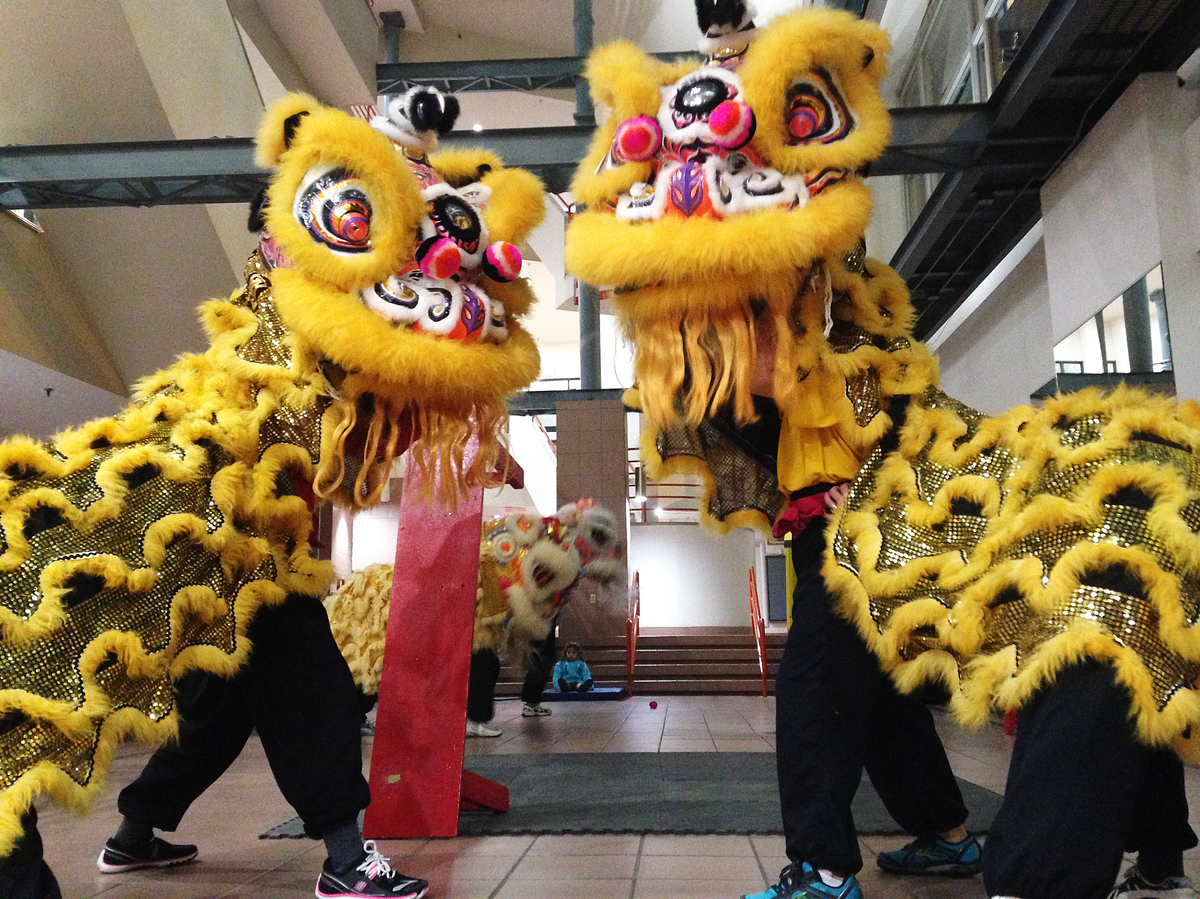 More than two dozen Asian-American women ranging from their mid-teens to their late 50s together form Gund Kwok's lion and dragon dance troupes.

"Unfortunately, long ago, women in China used to be seen as not strong enough, not fit, not clean even," Tan explains. "So I decided that it's a new day and age, and we will model a different world."

It's crunch time for Gund Kwok's troupe members in the days leading up to Lunar New Year. Their weekly rehearsals are a combination of exercise class and acrobatic circus.

Jenny Guan has performed with the lion dance troupe for about eight years, which, she says, would probably surprise most of her high school math students.

"My students don't know what I do on Thursdays," she says. "This is kind of a secret life."

Growing up in her southern Chinese village, Guan says she dreamed of putting on the lion costume. Now at age 42, she lives in Boston's northern suburbs, and her childhood wish comes true at Gund Kwok's Thursday night rehearsals.

But this dream, Guan says, was not something her parents were particularly supportive of at first.

Guan's mother, Xiu Qiong Guan, says given the opportunity when she was younger, she would've absolutely joined a lion dance troupe. But back in China, she says, women were seen as being inferior to men.

Things are different for women living in America.

"We do," she says, half in English, half in Cantonese, "whatever we want."

I decided that it's a new day and age, and we will model a different world.

What the Gund Kwok troupe wants is to master their latest move.

The move requires two members – one standing in front and holding up the lion's head while the other crouches beneath the tail. Together, the dancers have to keep to a beat and jump rope, in synch, under an eight-foot-long costume.

They fail. More than once.

A frustrated cry cuts short the count in Mandarin of the swinging jump rope. Two exhausted dancers emerge from underneath a golden, fur-rimmed lion's costume.

"Alright, we'll try one more time!" exclaims one of the dancers.

Tan coaches the women through the move again. And this time they succeed. She says there's a trick to performing the illusion of rollicking lions and menacing dragons — perseverance.