Accessibility links
Does It Taste As Sweet To Say 'I Love You' In Another Language? : Code Switch When it comes to cross-cultural and bilingual relationships, not everyone speaks the same language of love. The language with the deepest emotional resonance tends to be the one that was spoken by each romantic partner at home when they were growing up. 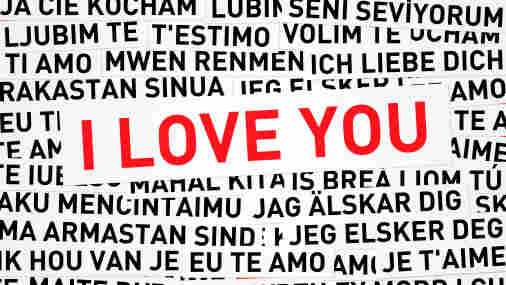 "How do I love thee? Let me count the ways." Kaan Tanman/Getty Images hide caption

Editor's Note: Code Switch is engaged in a month-long discussion and exploration of interracial and cross-cultural dating. Follow the conversation via the Twitter hashtag #xculturelove.

My first kiss was with an Albanian man I met in Venice, Italy; within hours, Jeta and I were telling each other, "Ti amo." I didn't mean it any more than I knew his last name (and I won't kid myself into thinking there was much sincerity on his end).

As my fleeting romance with Jeta proved, the Italian language holds very little emotional weight for me. In English, my native language, I don't make a habit of telling strangers, "I love you."

In any cross-cultural relationship that is also bilingual, there is a fundamental question that needs to be answered: What is going to be the couple's language of romance?

My mom, even after 30-odd years in the U.S., still heavily favors her native Arabic over her adopted English. It's how she counts out loud, writes grocery lists, yells at slow drivers in traffic, and shows affection. When it comes to terms of endearment, my family is not one to use "honeys" or "sweethearts" or "schmoopies"; to my mother, my sister and I have always been Hayati — her life — and our dad, Habibi, her dear.

It's not a hard-and-fast rule, Harris points out. A new language can become more dominant over time, or take on an emotional meaning when it's "used and learned in an emotional context," she says. "Haven't you heard the expression that the best way to learn a language is in bed?"

Learning a new language inside a classroom doesn't provide the same opportunities "to feel in love," Harris says. The language spoken primarily in the home or with loved ones develops a deeper emotional resonance.

Georgetown University linguist Deborah Tannen is the author of You Just Don't Understand: Women and Men in Conversation. Tannen, whose first marriage was to a Greek man, still uses Greek pet names with her current husband, an American. She says she calls him Michaelaki, using the Greek diminutive.

"You get two people who speak two different languages, they just start picking up certain words of the other language," she says. "The meaning could come from the way you're using it."

Tannen notes that Grandma will forever be Bubby for Jewish Americans, Yia Yia for Greek Americans. "You're using the word that that person would use for themselves," she says. "A familial relationship is so intimate, that to use a word that doesn't have those overtones would seem cold."

I could call my jiddo "Grandpa," and my mom could start calling my dad Sweetheart instead of Habibi, but the words wouldn't mean much more than when I told Jeta, all those years ago, "Ti amo."