Accessibility links
How I Learned To Feel Undesirable : Code Switch When Noah Cho was young, he thought that couples would be like his parents — that Asian men would be paired with white women. But he writes that when he looks in the mirror and reflects on his own experiences, he feels "unattractive and undesirable." 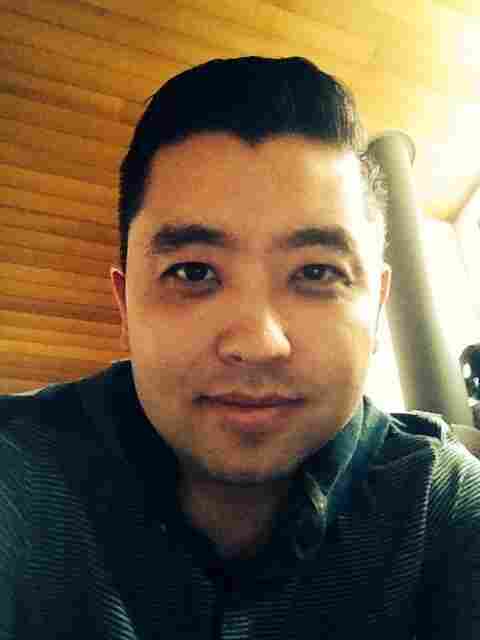 We asked writer Noah Cho to take self-portraits for this story. Here's one of them. Courtesy of Noah Cho hide caption

For the past few weeks, we've convened a conversation about romance across racial and cultural lines. Some of the most eloquent accounts we encountered came from a Bay Area junior high school teacher named Noah Cho. We asked him to expand on some of his experiences in this essay.

It's an odd feeling, as an adult, to look at a photo of your parents and feel perplexed by it. As a young child, I believed that most sets of parents looked like mine — a Korean man, a white woman — and it never registered to me that other parents looked different, or that their love could be something culturally undesirable.

But as I have moved through 32 years of looking at myself in the mirror, a time in which the vast majority of interracial couples I have known have looked nothing like my parents, I have come to see their love as something rare. Most men in interracial couples I have encountered do not look like my dad. They do not have his skin tone, or his combination of dark hair and dark eyes. My mom often tells me stories about when she began dating my father in suburban New Jersey in the 1970s, and I could only infer from her stories that her predominantly white community felt confused and unsure why a white woman would find an Asian man attractive.

I learned, slowly, painfully, over the course of my life that most people shared the opinion of my mother's community. I know this, because I look like my father.

When I look in the mirror, I do not see someone that I understand to be handsome by Western standards. I look mostly Asian, and like so many other heterosexual Asian males before me, I have internalized a lifetime of believing that my features, my face, my skin tone, in tandem, make me unattractive and undesirable.

I am certainly not the first heterosexual Asian male to arrive at this realization, and I do not doubt I will be the last. I know where my insecurities originated. I know that a lifetime of being a pop-culture nerd has placed me at the center of a media universe that has repeatedly sent me the message that a male that looks like me is incapable of dating anyone that doesn't.

Hearing my mother's friends imitate my father's accent after he died, making it ever more exaggerated, high pitched and feminized, reinforced this.

Overhearing female friends from every background and race discuss how they would never date an Asian man reinforced this.

I wanted, desperately, to look whiter, because I wanted to know what it felt like to be attractive. ... So, at the age of 18, I dyed my hair blond and placed green-tinted contacts into my eyes.

Seeing no one in my life that shared my cultural makeup and background until college reinforced this.

And even when I made friends who shared my racial makeup — an Asian father, a white mother — I didn't look like them. A good friend of mine had a Chinese father and white mother, but he was tall, his hair lighter, his eyes more of a hazel color than the burnt coffee that inhabited my face. His skin was paler, whiter and his voice deeper. From my narrow, image-conscious point of view, it seemed like everyone was attracted to him. And no one was attracted to me. 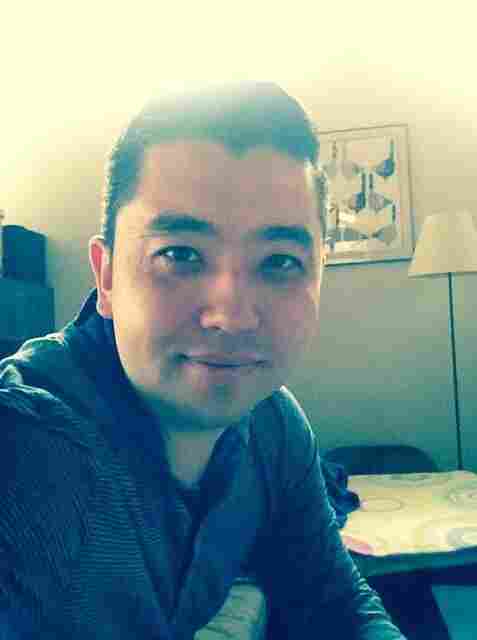 "I look mostly Asian, and like so many other heterosexual Asian males before me, I have internalized a lifetime of believing that my features ... make me unattractive and undesirable." Courtesy of Noah Cho hide caption

I tried to "fix" this, once. I wanted, desperately, to look whiter, because I wanted to know what it felt like to be attractive. I wanted to know how my friend felt, how being closer to whiteness, and therefore beauty, could make me see myself as handsome. So, at the age of 18, I dyed my hair blond and placed green-tinted contacts into my eyes. I was trying to make myself look more like my mother, even though I have always and will always look like my father. But in the end, no amount of bleach I put in my hair could alter the tone of my skin or the shape of my eyes. I may be half white, but no one will ever see me that way.

It is not a fun thing to feel unattractive. My wife, who is Japanese and Chinese and has been my partner for 10 years, tells me that she finds me attractive. It breaks her heart that I won't believe her. It breaks mine that I can't.

I wonder, though. If I had grown up now, I wonder if things might have been different for my self-image. I grew up in Orange County, Calif., in racially diverse, but segregated Anaheim. Koreans stuck around Koreans, Latinos around Latinos. I didn't see myself, or my parents, in the couples walking around Disneyland or the faceless strip malls that dominated my youth.

Since moving to the Bay Area a few years ago, I've started to see my parents more often. I saw them, young and vital, walking down Market Street holding hands. I see them having picnics in Golden Gate Park or waiting in line at food trucks in Oakland. I see them in the faces of the parents of the students I teach. And then I look at my students and I am surprised to find that occasionally I see a face that looks like mine, born from love like my parents'.

I am even more surprised to sometimes see my students fawn over the images of K-pop stars and hear them practice words in Korean, and for a moment I am struck by the thought that had I been born 20 years later my appearance might have made me an object of desire in this country. But then I look in the mirror again, and I see not the slim faces and chiseled body of those stars. In that moment, I understand that there is likely no standard of beauty, in either of my parent's countries of origin, that would make me feel like I could possibly be desirable.

I wait for the day that I can look at my own face, and see something other than disappointed eyes looking back at me. I long for this, as much as I long to look at that photo of my parents, and finally see that it was nothing more than two people, in love.