Accessibility links
'Tiger Mother' Author Spells Out 3 Traits That Drive Success In The U.S. : Code Switch Yale law professor Amy Chua sparked controversy with her first book, Battle Hymn of the Tiger Mother, where she touted her strict style of parenting. Now she and her husband, Jed Rubenfeld, are out with a new book, The Triple Package. The couple talk about why they believe some cultural groups are better poised for success. 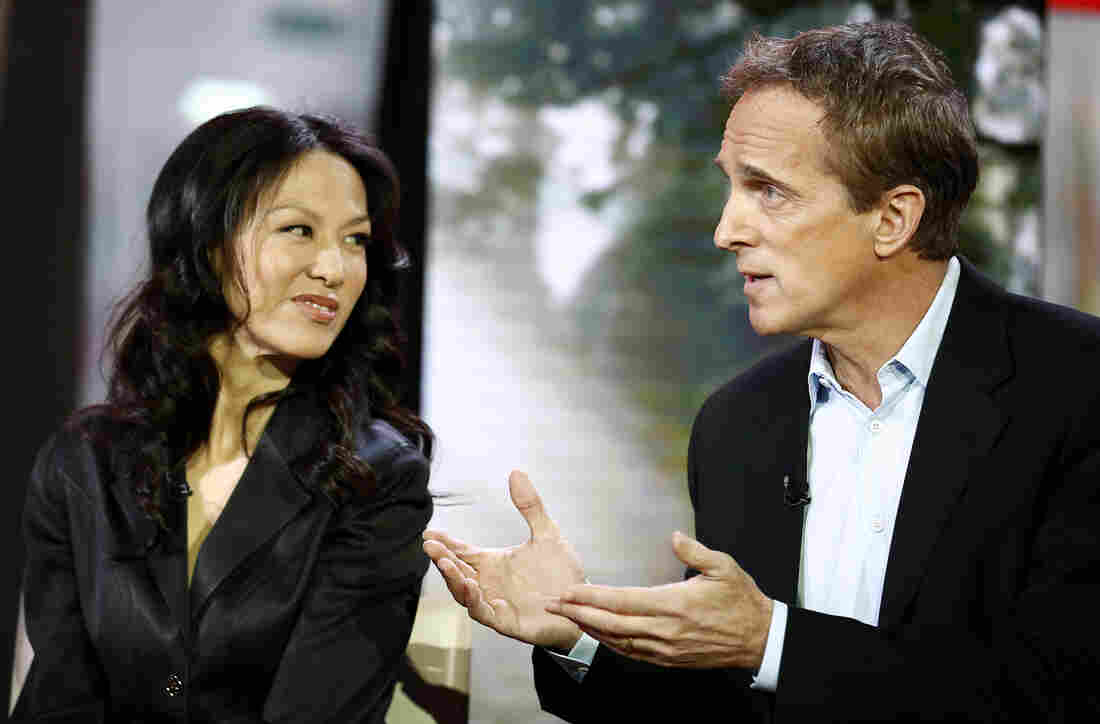 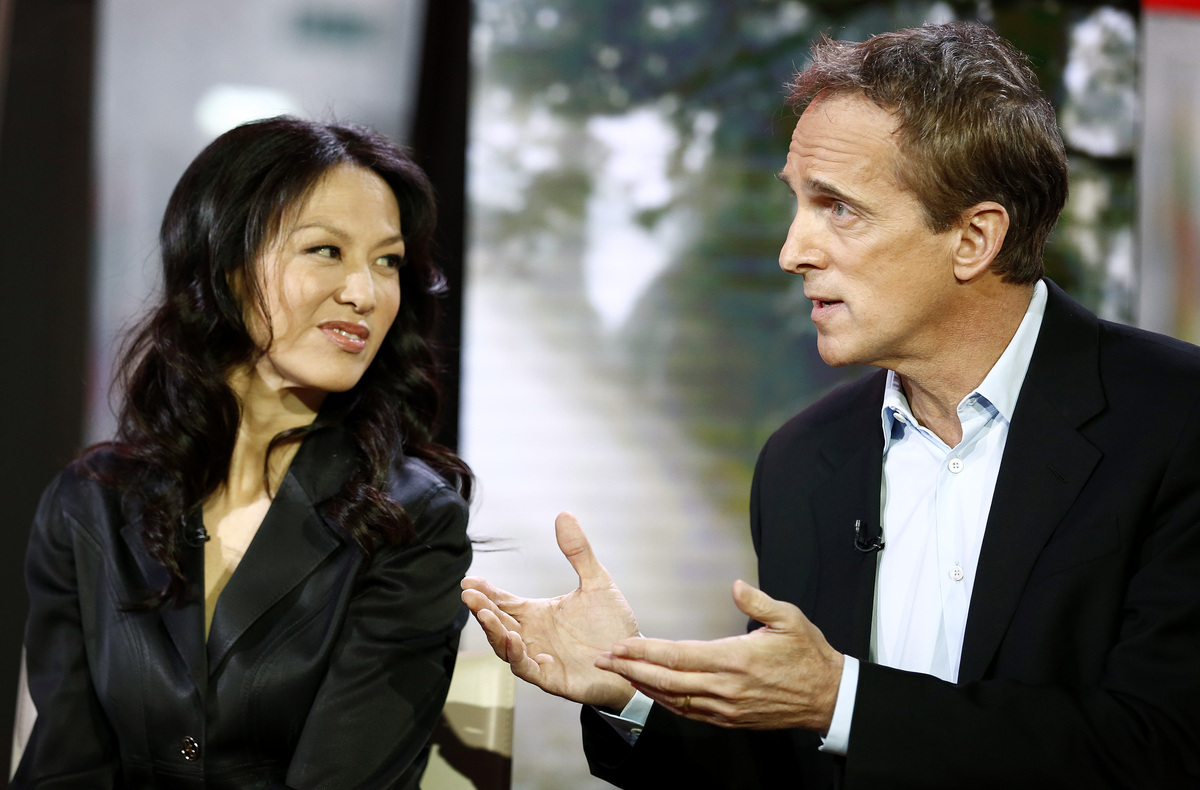 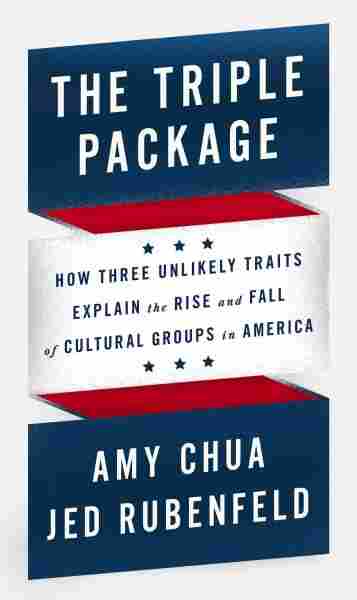 by Amy Chua and Jed Rubenfeld

If you're a fan of parenting books or just raucous debates about parenting styles, then you probably know about Amy Chua. The Yale Law School professor kicked off a ferocious debate with her 2011 memoir, Battle Hymn of the Tiger Mother. She took pains to point out that the book was tongue-in-cheek, but it still got much attention for her defense of a demanding parenting style that she traced to her Chinese roots.

Now Chua is out with another provocative book, The Triple Package: How Three Unlikely Traits Explain the Rise and Fall of Cultural Groups in America. She co-wrote it with her husband and fellow Yale law professor, Jed Rubenfeld. They argue that eight cultural groups are poised for success in the U.S. because those cultures possess specific traits: a superiority complex, insecurity and impulse control. The groups are (in no particular order of importance): Jews, Mormons, Indian-Americans, Iranians, Cuban exiles, Nigerian-Americans, Lebanese-Americans and Chinese-Americans.

Chua and Rubenfeld spoke with Tell Me More's Michel Martin about the new book and what they want readers to take from it.

On what it takes to be successful

Chua: This is a book, in some ways, about what it takes to be successful in America today, in this very, very tough economy. One way of getting at that question is by looking at the groups that at this moment today are doing especially well in terms of these very conventional metrics: income, educational attainments, etc. And these three qualities that we talk about are actually open to anyone, of any background, any skin color. When you do access them, they propel you to success. It's like they generate drive.

Chua: We kind of looked around at the groups that seemed very different at first, and noticed that they actually all have these traits in common. It's the combination of simultaneously feeling superior and special, and insecure and not quite good enough that really generates motivation.

Let me just give you a concrete example. Take a lot of immigrants. There are immigrants who come from, I don't know, China or Ghana or Persia or [Greece], and they feel like they came from ancient civilizations, great civilizations. And maybe some of them had high status in their countries. And then they come to this country, and suddenly they are outsiders. They look different. They have a funny accent. You don't feel properly recognized. And that feeling of being almost a little bit resentful, you know, "I'm gonna show everybody," that can be an incredibly powerful motivator for success.

Chua: What we say about America as a whole is that after the 1990s, when suddenly it seemed like there was no more communism or rival — America was at the top of the world — there did come to be a sense of general, I don't know, entitlement or complacency. That, you know, we have all the answers. And ironically, now with the rise of China, with some of the unwon wars, with the financial crisis — it's actually an optimistic story. You know, maybe we haven't done some things right. Maybe we can be better. We shouldn't be so self-congratulatory.

Chua: We talk about this conventional success, this idea that you have to be successful based on income or education, or you have to be a certain kind of professional, almost as a downside — it's a pathology. And I understand it because a lot of people who are immigrants, they are insecure about survival. So if you just come from a country and you don't know if your kid can make it, you want them to be a professional, you're afraid for them to be an activist or a poet.

But what we say is, actually, that's a downside of some of these cultures. And the real kind of success, I think, is the ability to pursue success as you define it, including success defined by service to others. ...

And the real kind of success, I think, is the ability to pursue success as you define it, including success defined by service to others.

If somebody said, "Look, I don't wanna read this book. I wanna read a book about activism," then that's fair. That's not the central thing. We're very interested in: Look, it's a hard economy right now. But look, there are still some pockets of society in America that are still, believe it or not, rising. What's the psychological mindset that makes some people overcome some of these obstacles, and what can we learn from them? And activism is certainly part of it. But, you know, I guess we're looking at the other half of it as well.

On how institutions play a role in an individual's success

Rubenfeld: These cultural factors are not sufficient in themselves. Institutions matter. Society matters. America has to change before the plight of many of its impoverished groups will change. That's true — we all know that; Amy and I believe that. That's just not what our book is about.

On the costs of success

Chua: The book is actually trying to get people to see success in an honest way. Why are some people driven? Why are some individuals driven? Well, it probably means something's missing, you know, something's pushing them. I think the right way to read this book is not as a congratulatory thing but what is it that produces drive, and is it worth it? What are the costs of success?

On criticism that the book creates more distance between groups

Chua: For me, one of the interesting things is that our book, I think, debunks racial stereotypes. So one fascinating, very consistent finding in the research is that after a couple generations, Asian-Americans, for example, do not outperform anyone else in the country anymore. So it's very much an immigrant phenomenon, and it's very, very fluid. So it's not that there are, you know, innate differences across groups. But it's actually very much sort of a product of the institutions you face, and where you are in the immigrant trajectory.

I find the real thesis of the book is in some ways about breaking out from the prison of these expectations that the first-generation immigrants often impose on their children, and freeing them up, that, you know, in a way, if you can break away and define success as you want it, including through public service or helping others or artistic formats, that would be the ultimate goal.

On why they expected to be criticized for the book

Rubenfeld: I think anytime you talk about the fact that some groups are doing better than the American average in the United States, there's going to be sensitivity. And that's good. There should be sensitivity. People should demand to see the data. They should demand to see that everything you say is backed up by studies, which we tried very hard to do. There's going to be that sensitivity. But, look, we think the facts actually debunk racial stereotypes. We think the facts are actually very hopeful.

Read an excerpt of The Triple Package