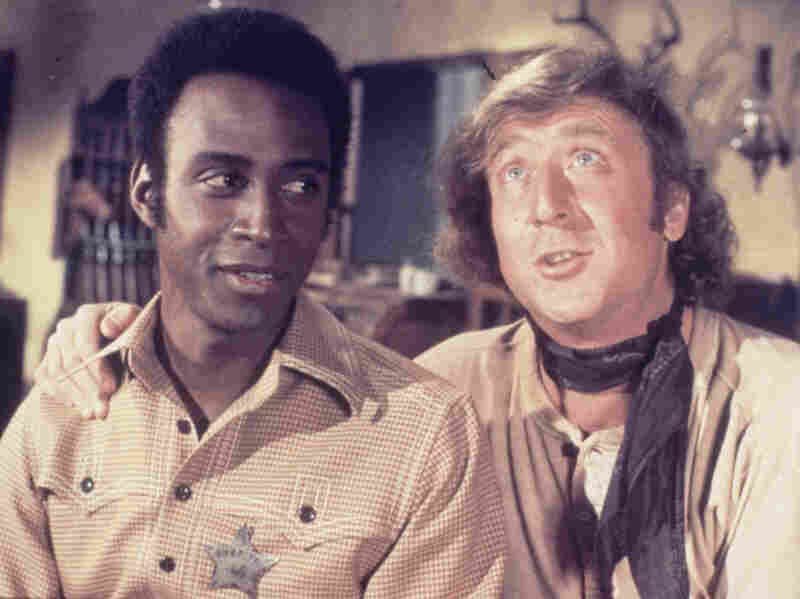 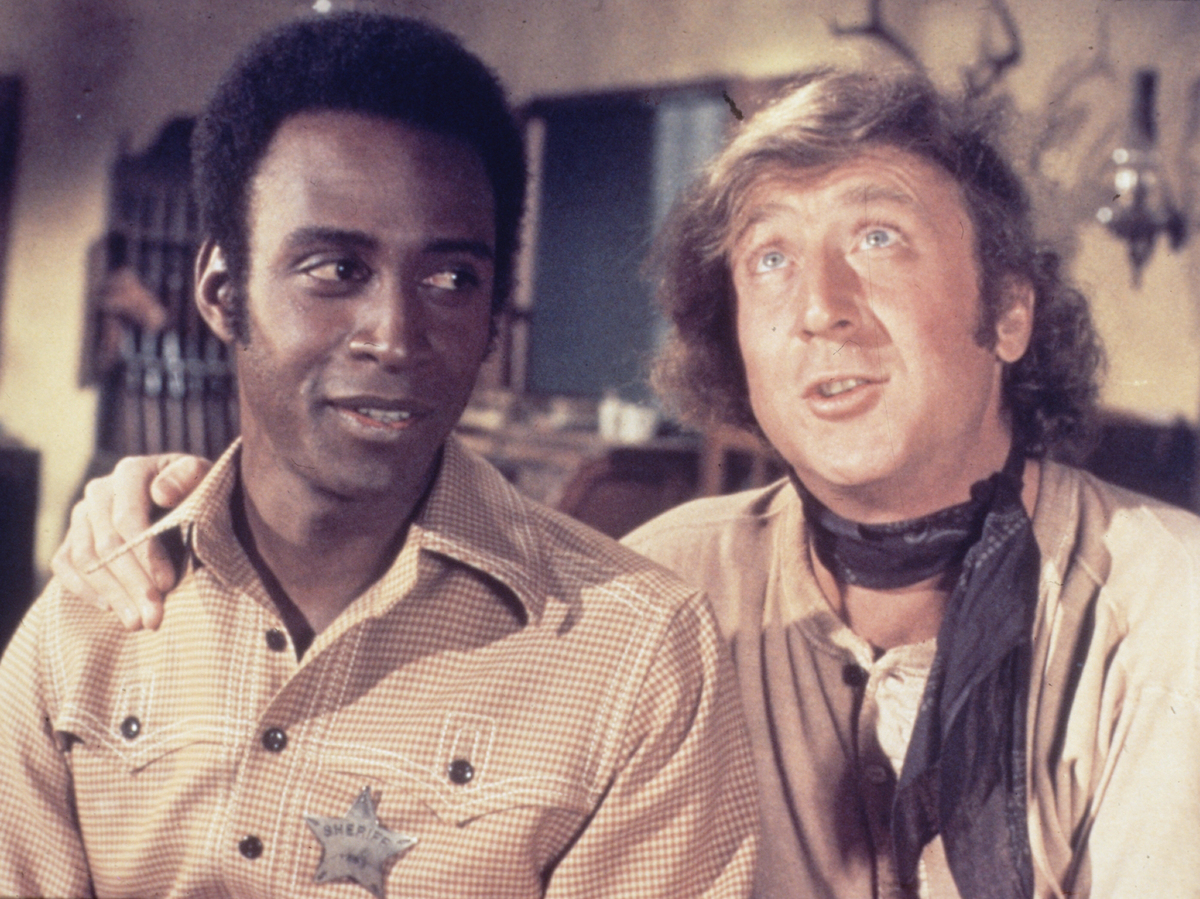 Cleavon Little and Gene Wilder in a scene from Blazing Saddles in 1974.

Mel Brooks' Western spoof Blazing Saddles turns 40 Friday, and along with its over-the-top jabs at racism and Hollywood, it set the gold standard for what is now an overused cinema trope: the interracial buddy comedy.

You'll have to track down a DVD — Blazing Saddles is glaringly absent from Netflix's streaming service. But here's the gist of the film: The no-good State Attorney General Hedley Lamarr (not to be confused with the actress of a similar name, Hedy Lamarr) wants to build a railroad through the quaint fictional town of Rock Ridge. Hoping to scare off the townsfolk and prepare the way for a land grab, Lamarr sends in the first black sheriff, a former railroad worker named Black Bart, played by Cleavon Little. The plan backfires, though, when Bart teams up with local gunslinger Jim (Gene Wilder). Together, they win over the unrepentantly racist town and save Rock Ridge from near destruction. Along the way there are a few gunfights, Mel Brooks as a Yiddish-speaking Native American chief, Madeline Kahn in a corset, and the invention of the candygram. The end.

In his tepid New York Times review, Vincent Canby called the film "every Western you've ever seen turned upside down and inside out." But the real heart of the movie — the "center of gravity" that Canby lamented was missing from the story — is the relationship between Bart and Jim.

The Tony Curtis-Sidney Poitier film The Defiant Ones set the template for interracial buddy films, says Michael Green, senior lecturer of film and media studies at Arizona State University. He cites Hernan Vera and Andrew Gordon, who in their book Screen Saviors: Hollywood Fictions of Whiteness describe the model set by The Defiant Ones as "two men, one bigoted white and one proud black, are thrown together by circumstance and forced to work together for a common goal."

It was a model later copied by Guess Who's Coming to Dinner (though its lead male characters were not what you'd call "buddies") and In the Heat of the Night, both, not coincidentally, starring Poitier, who at the time was one of the few African-American stars white audiences were willing to handle. The characters he played were nonsexual and nonthreatening. Hollywood loved him.

But by the 1970s — post-civil rights movement, post-Vietnam War — audiences were ready for change. "Blaxploitation" films in the vein of Shaft marked the first time "black urban heroes began to take center stage," Green says. "That sort of set the stage for Blazing Saddles."

Brooks has never been known for his subtlety, and Blazing Saddles is no exception. Gone are the earnest, long-winded speeches about racial harmony that characterized movies like The Defiant Ones; instead, the film, co-written by Richard Pryor, tackles race and racism head-on and with humor. (It's so un-PC that Brooks told Jimmy Kimmel in 2012 he wouldn't be able to make the film today.)

No ethnic or racial stereotype goes unmentioned: Mexican bandidos, Chinese laborers in straw cone hats, Arabs of ambiguous origin riding on camels, and yes, a Jewish Native American, all make cameos in Brooks' bizarro world, but they're not the butt of the joke. "Blazing Saddles is a satire of racism," Green says. "That's what makes it groundbreaking. [Brooks] satirizes racism; he shows how stupid it is."

While Black Bart and Jim's interracial relationship wasn't the first such on-screen friendship, it was one of the first in which race wasn't treated as an obstacle. When our two heroes meet, a drunk Jim is hanging upside down from a jail cell bunk; Black Bart has just arrived in town, and is watching his new partner with bemusement.

"Are we awake?" Bart asks Jim.

So, it's on the table: Jim is white, and Black Bart is, well, black. There's no tension to overcome, no soul-searching or come-to-Jesus/Kumbaya moment. Bart and Jim are never pitted against each other; they're allies right off the bat, and the enemy, in this case, is white racism. (Green points out the added layer of Wilder being Jewish, though Jim is not explicitly a Jewish character in the film.)

Though Little and Wilder receive about equal screen time, Bart is arguably the true lead, another departure from traditional interracial film relationships, in which the black character usually serves to prop up the white one (think Shawshank Redemption). It's Black Bart's show to run, and he takes every available opportunity — and there are many — to highlight the stupidity of the white racists. Whether he is crooning Cole Porter's "I Get No Kick from Champagne" to a white boss demanding a "good old n- - - - - work song" or taking himself hostage, Bart, along with his fellow railroad workers, is always in on the joke.

It is worth noting that as groundbreaking as Blazing Saddles was in terms of race, the same can't be said for its treatment of gays and women. The F-word — not that one — is thrown around liberally, and the four or so women who have lines in the film are either clutching their pearls or taking off their clothes. The movie isn't self-aware at all when it comes to certain groups.

Even though The New York Times failed to appreciate its humor (or make mention of the racial elements of the film), Blazing Saddles was well-received in 1974. Roger Ebert gave it 4 out of 5 stars, it received three Oscar nominations, and AFI placed it at No. 6 on its list of the Top 100 Funniest American Movies of All Time. Now, four decades on, it remains as biting a satire as ever, and its impact on Hollywood can still be felt.

You don't want to mess with Gene Wilder and Richard Pryor in Stir Crazy.

A slew of "interracial buddy comedies" followed in the wake of Blazing Saddles, including more appearances by Gene Wilder, who paired with Richard Pryor in Silver Streak and Stir Crazy. The 1980s gave us Trading Places and the buddy cop movies 48 Hours, Lethal Weapon and Beverly Hills Cop. They all pulled off the stunt of using humor to tackle race relations, but after 40 years, the charade feels spent. Can't Hollywood bring together black and white characters without some kind of contrived setup?

"In approximately this sequence, those rules include: Two men of different background/race are thrown together by circumstance (and quadrant-minded Hollywood marketing executives). They chafe at and resist each other; in fact, they rub each other so wrong that comedy (and, later, a little bit of drama) ensues. But thanks to a common threat, they finally come to appreciate and help each other. We all feel a little lighter for laughing, and maybe a little elevated to boot, because, hey, if a white cop and a black cop can get along, can't all of us?"

Until Hollywood can offer a new, more realistic take on interracial relationships, you're better off watching Blazing Saddles.