Accessibility links
Another Murder Case In Florida Sparks National Outrage : Code Switch The Michael Dunn trial became a flashpoint for ongoing debates about race, criminal justice, and politics that it's not capable of resolving. 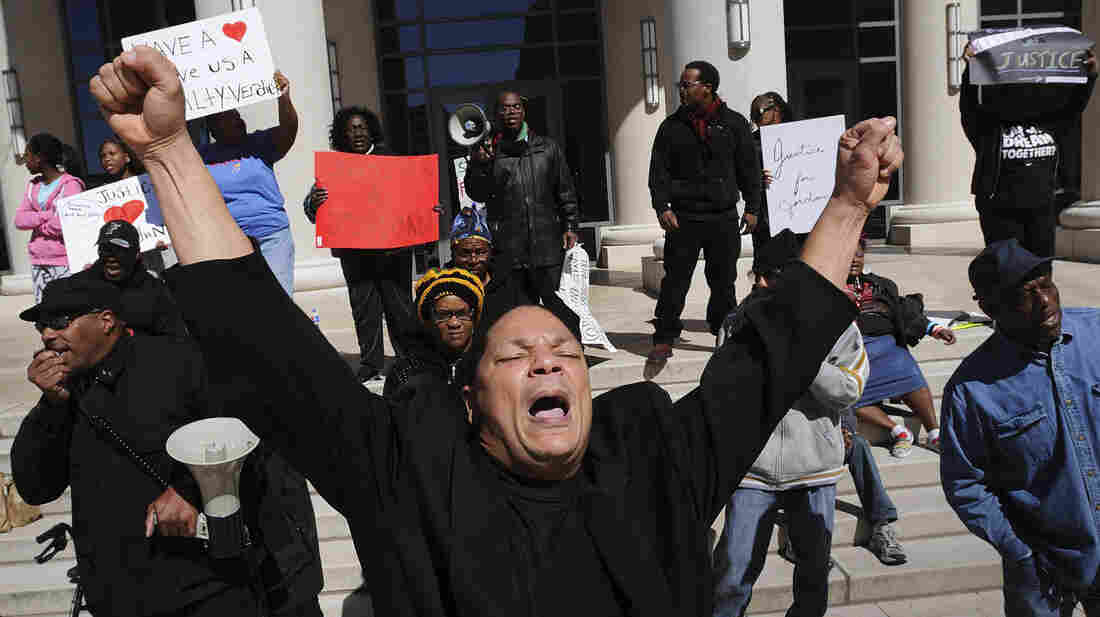 Bobby Worthy, President of The Justice League, leads a chant outside of the Duval County Courthouse during the trial of Michael Dunn in Jacksonville, Fla., on Saturday. Reuters /Landov hide caption 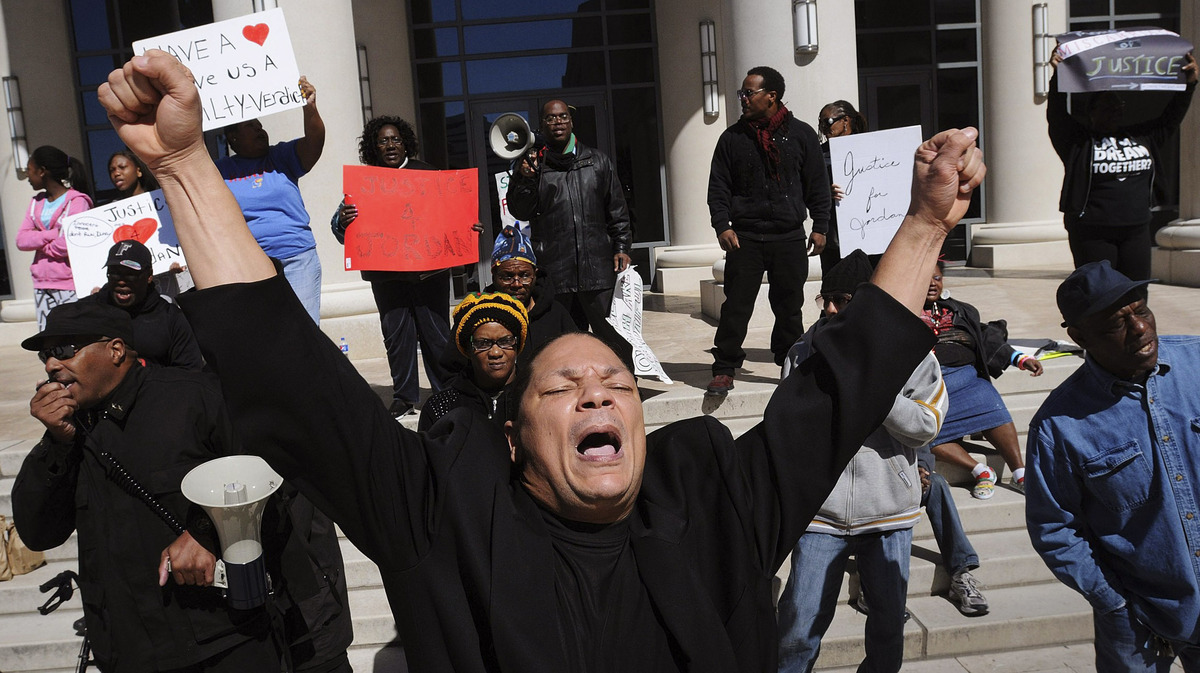 Bobby Worthy, President of The Justice League, leads a chant outside of the Duval County Courthouse during the trial of Michael Dunn in Jacksonville, Fla., on Saturday.

The Michael Dunn case is of a type that we see with harrowing regularity. An unarmed black man is shot and killed by a police officer or a white person. The shooter says he felt threatened.

The way we talk about those cases follows a pattern, too. The conversation quickly becomes about politics, about race, and the messy intersection of the two. Stand Your Ground. Stop and Frisk. The War on Drugs. All these things snowball into each other, and while the trials of their shooters are about the particulars of their cases, they are also about all the other gruesome cases that came before them. Amadou Diallo. Patrick Dorismond. Sean Bell. Trayvon Martin. We end up talking about everything, all at once, even though our criminal justice system isn't meant to resolve all of that context. Sometimes it feels as if it's not even capable of resolving the specifics of the cases in front of it.

I spoke to Ta-Nehisi Coates of The Atlantic ("On the Killing of Jordan Davis by Michael Dunn) and Jamelle Bouie of The Daily Beast ("White Fear Matters More Than Black Lives"), who both wrote searing columns in the immediate aftermath of the verdict that blew up all over social media, here at NPR Tuesday. Their essays got at a lot of the frustration that a lot of people were feeling with the way this trial played out, and the conversation surrounding it. Some of our conversation aired during Wednesday's Morning Edition, but quite a few people asked to hear it in full. So we've decided to share a director's cut of that conversation, which you can hear below.

The Messy Backdrop of the Michael Dunn Murder Trial

Here are a few of the highlights.

In the George Zimmerman case, the hoodie Trayvon Martin was wearing became a kind of racial Rorschach — it was either a benign article of clothing or a signifier of racial menace. In the Dunn case, the hip-hop blaring from Davis' car played the same role. Here's what Coates and Bouie said:

Coates: If it was a car full of white kids, would that have gone down the way that it did? Even if they were listening to the same music? But also beyond that, hip-hop is no more violent than American pop culture is violent. What do our video games look like? What do our movies look like? What do our comic books look like? Is hip-hop really any different than the country from which it comes? And yet hip-hop in particular is "thug music"... that's actually not very different from the broader culture within which it resides. Which is not to say it shouldn't be critiqued, but I'm saying that those other things are not affixed with that label.

Bouie: No one would go to, like, a comic book shop and see a bunch of kids trading Wolverine or Deadpool comics and say, "Those are a bunch of potential murderers." We would all treat them as distinct individuals — as well you should. Dunn, Zimmerman — each of these people did not look at Trayvon, Jordan. They were thugs. [A] nondescript mass of black threat. Which is, you know, I wouldn't say "in their defense," but in context, that's just how we've portrayed black men.

One common reaction to the media attention these cases draw is that there isn't nearly as much focus given to homicides in which both the killer and victim are black. No one in this conversation bought that premise, though.

Coates: First of all, it has no meaning because nobody talks more about black-on-black crime ...

Coates: No one. No one. I mean, it's not our fault that people who say that don't pay attention. The idea that when Hadiya Pendleton got killed that black people in Chicago weren't talking about that is ridiculous.

Demby: It was all over the news. Michelle Obama talked about it.

Coates: Exactly. It was everywhere.

Bouie: It's part of casual conversation. I can't even count the number of time my parents or my church [said] ... "We've got to stop killing ourselves."

Coates: It's constant! The song was called "Self Destruction"! That was the actual song! That was the name of it! That's like a real thing. That more than anything about Klan violence or anything like that, that was the constant drumbeat of my youth in Baltimore. And so the idea that black folks don't talk [about it] ... first of all it's false.

This case wasn't about the politics of Florida's Stand Your Ground statute inside the courtroom, but the larger conversation around this case is very much concerned with that provision as policy and politics. But Bouie said that repealing Stand Your Ground, a position that both he and Coates advocate, is an almost impossible lift.

Bouie: To repeal that law, in effect, [means building coalitions either] with people who support that law, or [who] represent constituencies who support that law; constituencies that are mostly white and are from certain portions of the state and have the attitudes they have for grounded historical reasons. ... So even that sort of Step 1 — how can we do something about this solution, repeal the law — is almost impossible. Like, it's, just not going to happen. ... The way our political system is designed, there's no way to fix that legislatively without the explicit cooperation and support of white Americans. ... Let's say that only 20 percent of white Americans believe that there are no significant racial disparities in American life: In the American political system, that just might as well mean a majority.

Coates shared the story of his college friend Prince Jones, who was shot and killed by police during a traffic stop. In the Washington, D.C., area, that killing became a huge story.

Coates: I have a piece I'm working on, I guess I can share this, about a buddy of mine who was killed. ... His mother was a radiologist. She made the mistake of being an American and buying her son a Jeep for his 23rd birthday. He went out in that Jeep. The police out in Prince George's County [Md.] were looking for a suspect with a Jeep of a similar make. They ran the tags. The tags came up for this woman in Pennsylvania — who was his mother — 'cause that's where it was registered. They assumed it was stolen and followed this young man through three jurisdictions and shot him. My friend, Prince Jones, was a born-again Christian. He was going to see his daughter. And his fiancee. His mother was perfectly upstanding. And her life was plundered; her legacy was plundered. Her child was taken away. Respectability has nothing to do with this. There's no way that you dress a certain way or speak more polished that [pause] makes you not a n- - - - -. And you all can cut that if you need to cut that; I'm sorry. But: These are the facts. There's no way ... there's no way to get you out of that. That's what racism says you are and the way to get out of that is to eliminate racism. [Laughs] Listen: That brother's mother, I sat with her and she said, "I had talked to him about how to deal with the police. It's not like we didn't have that conversation. Yeah, we did." I talked to Lucia McBath, Jordan Davis' mother. She said, "I talked to Jordan about that. It's not like we didn't have a conversation about how to comport himself when he's out. But that boy ... is 17 years old. You can't say that the way to not get killed is to have the maturity of a 45-year-old." That's just ... OK, so then we lose. That is actual racist logic. Because you're not requiring that of white young men. Seventeen-year-old white men. That is racism.