Accessibility links
What World Of Warcraft Can Tell Us About Race In Real Life : Code Switch The popular video game adjusted the traits for its mythical races of dwarves, elves and the like to create more parity. Gamers tell us what this means in-game and in the real world. 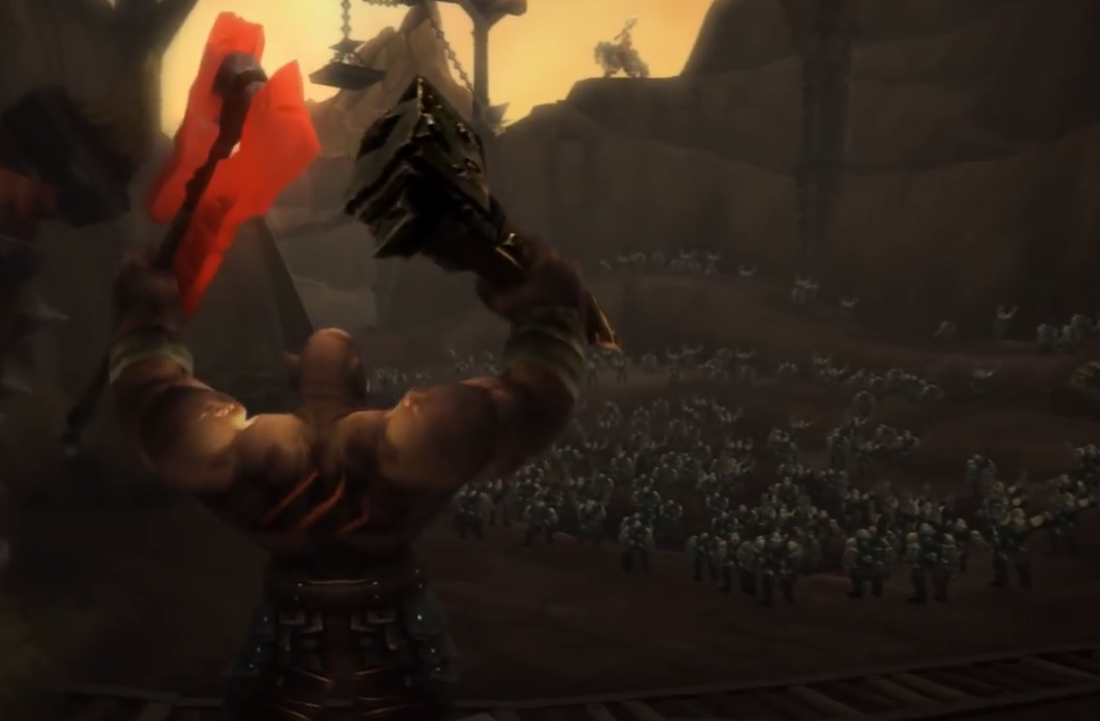 "What's an orc gotta do to get a cab in this town???" Blizzard Entertainment hide caption 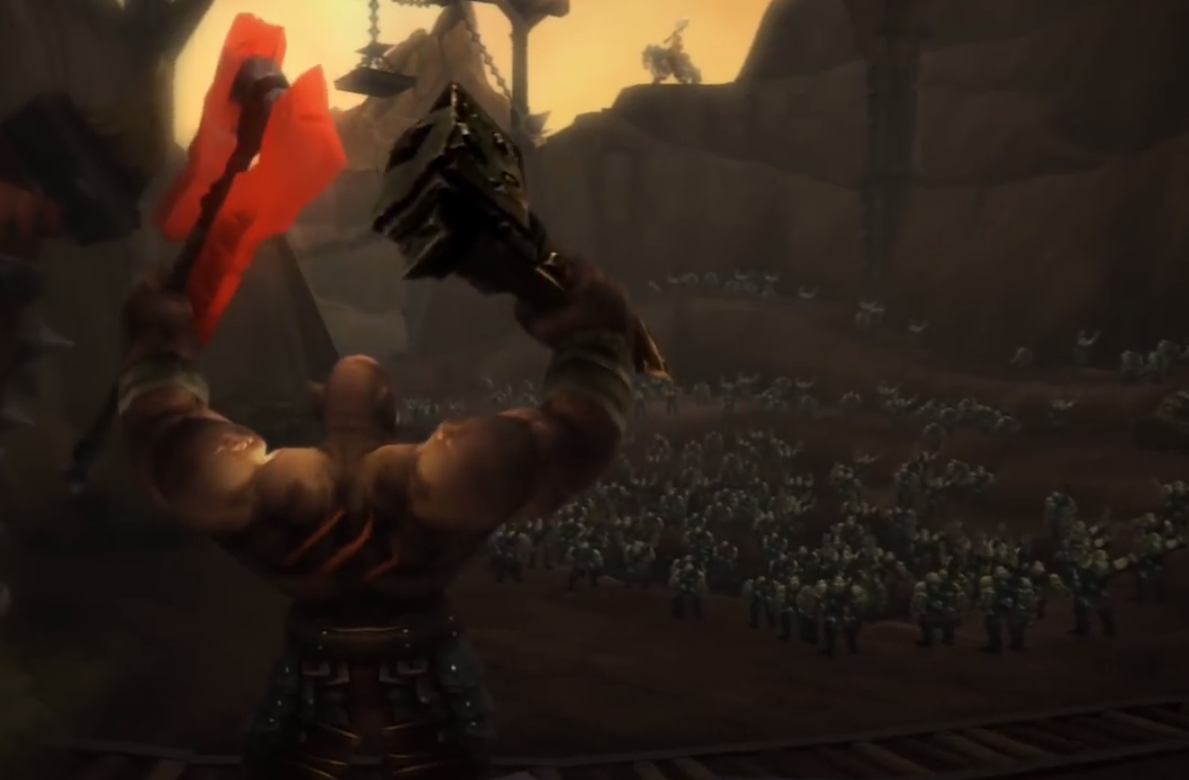 World of Warcraft is trying to reduce racial inequality. Don't worry, this isn't about racial disparities between black, Latino and Asian players — we're talking about gnomes and trolls and orcs here.

Last week, Blizzard Entertainment, the developers behind the hugely popular role-playing game, tweaked some of the racial attributes in World of Warcraft: Warlords of Draenor, the game's latest expansion. With the new changes, night elves have gotten quicker and humans are less adept with maces. There's a whole lot more, but the upshot is that almost every race in the game is now more versatile than they were before — making for more equal geek opportunity, if not exactly equal geek outcomes.

WoW's millions of online subscribers interact in a shared, ever-expanding world. Players can make the characters they create farm or hunt or team up on missions and raids. But before you do any of that, you have to pick a race.

And that's a big choice for you the player, as the different races in the game have special abilities, different strengths and weakness. (There are countless websites that offer advice selecting the best race for your character; post-racialism is apparently a crock even in fictive realms!) After you pick a race, you pick a class — say hunter, mage, warrior, warlock — and the class makes racial traits even more specific to your character. Your character's skills get stronger ("leveled up") with each successful adventure. Your gaming experience is deeply individualized; this ain't Mario.

I'm not a WoW player and not well-versed on the politics, culture and mechanics of Azeroth. So I reached out to some folks who could break down some of the implications of all these new rules. The three gamers I spoke to — Guillermo Hernandez Martinez, Alex Schelldorf and Mink Choi — were all former Warcraft diehards who quit playing after it began to slowly take over their lives. (Choi once wrote a candid essay for Thought Catalog about how she was kicked out of college because of her Warcraft obsession.)

From our fun, weird conversation, it became clear that picking your character's race was hardly a neutral choice. And, in fact, some of the ways that race works in the game echo the way race works in real life.

Let's start with the parallels.

There are a lot of ways to play WoW. You can team up with a guild — a clique of people who organize in real life to plan and carry out in-game missions together. You can play solo and explore, or farm, if that's your bag. Or you can roleplay, which is when you play your character in a way that is faithful to the game's complicated lore. (Think Star Trek fans who dress up as Klingons and learn the fake language, or Civil War re-enactors who never break character.) A lot of people play this way.

"There are roleplay specific-realms, wherein players who know the backstory and history and lore interact with each other in this way, continuing the story or forging their own," Schelldorf said.

And that roleplay means acting out the in-game racial strife, too. "A lot of people do adopt the conflicts between in-game races pretty seriously," Hernandez said. "But in my experience it was only when they were in character. They would have a completely different set of [hatreds] when they were in another character."

In the game, there are theoretically a lot of different play styles, but playing in a way that deviates from the typical strengths of your race and class can earn you a lot of grief from other players. That will sound eerily familiar to people who've been accused of not being, for example, Jewish enough.

Schelldorf, a colleague here at NPR, gave me a primer on WoW before our chat with the others. Once, he said, he was told he wasn't playing "right." His character, a troll hunter, was wearing the wrong armor for his playing style. Some other players who were moseying by noticed, and came over to taunt him. They messaged him: You're doing this all wrong, n00b! Schelldorf's character flew away from his tormenters. "They didn't know what I was trying to do," he said.

When Race (In Real Life) Creeps In

Some of the races in the game seem to bear an uncanny resemblance to real-world racial stereotypes. There's a group of trolls who wear bright clothes and speak in something that our players said sounds very close to a Jamaican accent.

Choi pointed to the Pandaren — a race of giant humanoid Pandas who wear straw hats and practice the "Art of Acupressure," hailing from clans with vaguely Chinese sounding names. "Like what was Blizzard trying to do?" she wondered. "Get more Asians to play the game?" (She said she played with a Pandaren for awhile, but quit after it began to feel kind of ridiculous.)

"There are also reflections of real-world attitudes that you can see in the game, like the lack of darker-skinned human characters," Hernandez said. "There are a wide range of skin tones available in character creation, but you always tend to see the lighter shades in-game."

So while players could choose darker skin for their characters, they were opting for lighter-skinned characters.

Our players also remembered the ways real-world racial dynamics crept into their interactions with other players. Here's Hernandez:

"I actually had pretty bad experiences joining guilds with my friends. We are all Mexican and had really strong accents. One of my friends couldn't quite speak much English at all. We got a lot of bad responses from guilds and got kicked out or resigned because of reactions to our accents and stuff like that. Eventually we found one that was really awesome about it and we would even feel comfortable talking to each other in Spanish during raids in order to not distract anyone else."

"I never met a single person with a 'Hispanic-sounding' accent on the game. But I can say that those who sounded Asian or black were less welcomed. ... Might have just been my realm; could also have been the direct influence of my friend, who was a known racist (to me, anyway) being uncomfortable with having anyone who didn't speak English in the guild. God, these are some rough memories."

Choi said that female players were treated much more harshly. "Sometimes it was funny, most of the time it was annoying. Receiving whispers from guys like, 'Do you have bewbs?"" she said. "I mean, come on, have some tact at least."

Schelldorf agreed. "Female players had to prove themselves way more than male players to be accepted to raid, and they were treated/disciplined like children when they messed up."

So how does race in WoW differ from race in real life? (You know, besides magic and elves?)

Of course, the biggest way that race in the real world differs is that you can't choose it. You can choose how you self-identify, sure, but the way people "race" you is, to a large degree, out of your hands.

In WoW, creating more parity between races was a matter of tweaking a few sliders, making one group more resistant to battle damage or giving another better aim with a bow and arrow.

In our world, the one we can't turn off when our eyes need a rest, fixing racial inequalities has never been close to this simple. We still haven't figured out how to address things like academic inequities, housing discrimination, or people being denied job opportunities because of the way their names sound. We can't even come to a consensus about whether those are problems worth addressing.

Which brings us to one of the notable ideas about race in the real world that echoes the fiction of WoW: the notion that your race determines your aptitudes and weaknesses. People still talk about Asian-ness giving folks +1 Math or blackness conferring +4 Menace, and these stereotypes are embedded in our real-world codes — our policing strategies and lending practices and laws.