Accessibility links
Got Bulgogi? The (Maybe True) Story Behind A 'New York Times' Ad : Code Switch This quarter-page ad wasn't touting a brand or institution. It was pitching grilled beef as an example of the inherent attractiveness and value of Korean culture. So, who's behind this ad?

Got Bulgogi? The (Maybe True) Story Behind A 'New York Times' Ad

Got Bulgogi? The (Maybe True) Story Behind A 'New York Times' Ad 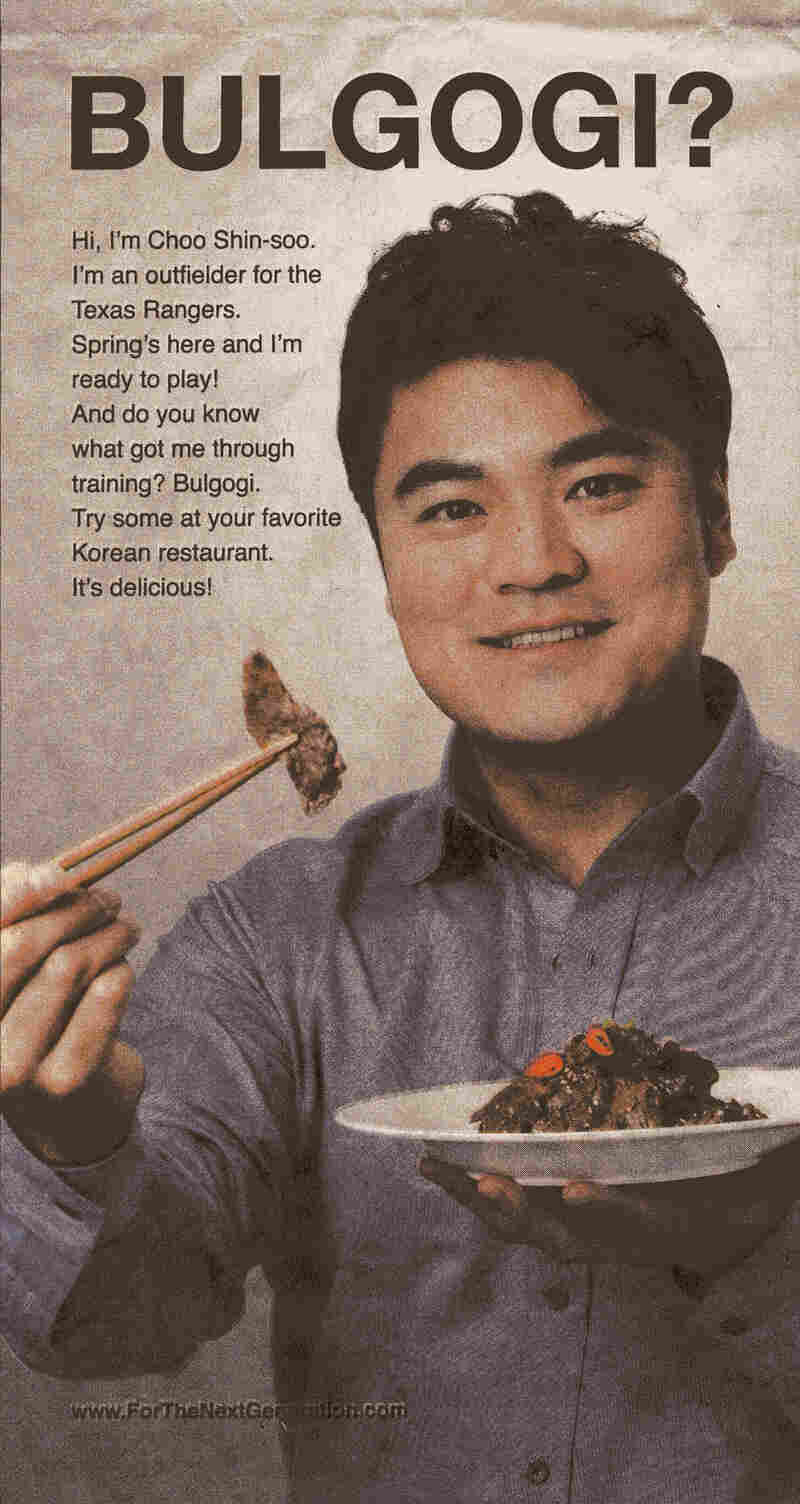 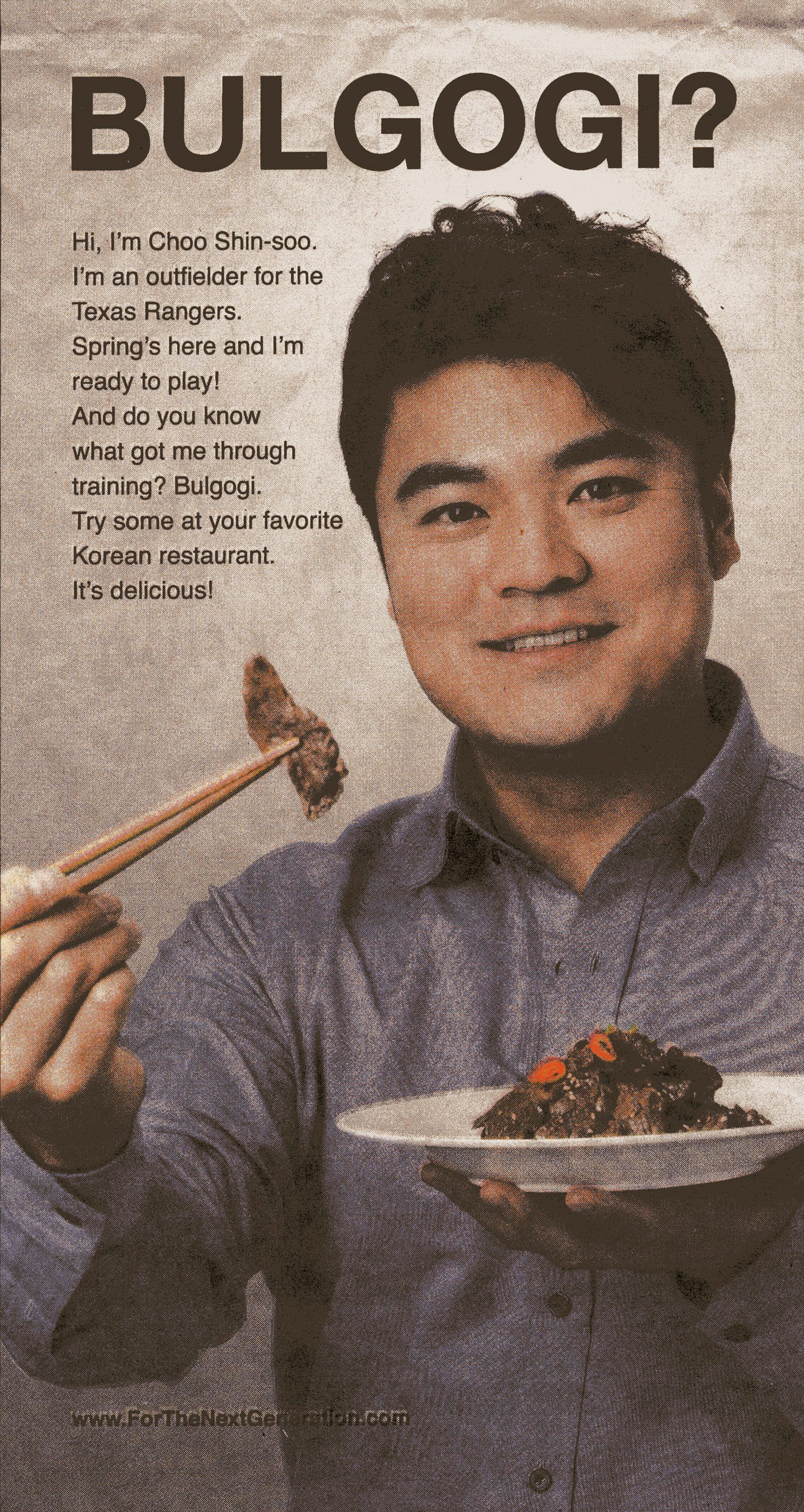 This ad was published in The New York Times on Wednesday.

Via The New York Times

Who? What? When? Where? How? Why? All are standard questions, but: "Bulgogi?"

That one-word question is the headline of an ad in the Wednesday print edition of The New York Times.

I was busy reading an article about Ukraine (that's what you do if you work at NPR) when I saw the ad.

On my first, second and third read, I was baffled. Was this an ad for a Korean-American restaurant association? Perhaps for a beef trade group of some sort? Was the ad seriously promoting grilled, marinated beef as an essential part of a spring training regimen? Is that why a Texas Rangers outfielder (called Choo Shin-soo in the ad but listed as Shin-Soo Choo by the Rangers) was inviting us all to try bulgogi?

And what was with the promotion of a national dish rather than a brand? It's hard to imagine an equivalent ad. It would be like Justin Timberlake appearing in a British newspaper ad touting the great taste of ... hamburgers. Not Burger King or McDonald's or Wendy's. Nope, just hamburgers.

Reading the ad was disorienting — like walking into your bedroom and finding your pillow at the foot of the bed.

"Spring's here and I'm ready to play!" Who says that? Why the exclamation point? It's all just weird.

In pursuit of greater understanding, I visited the website listed at the bottom of the print ad: ForTheNextGeneration.com. That just led to greater confusion.

First off, it looks like something that belongs on a cached GeoCities page.

Second, the website features links to English-language pages about K-pop and the city of Pyeongchang's bid to host the 2018 Winter Olympics. 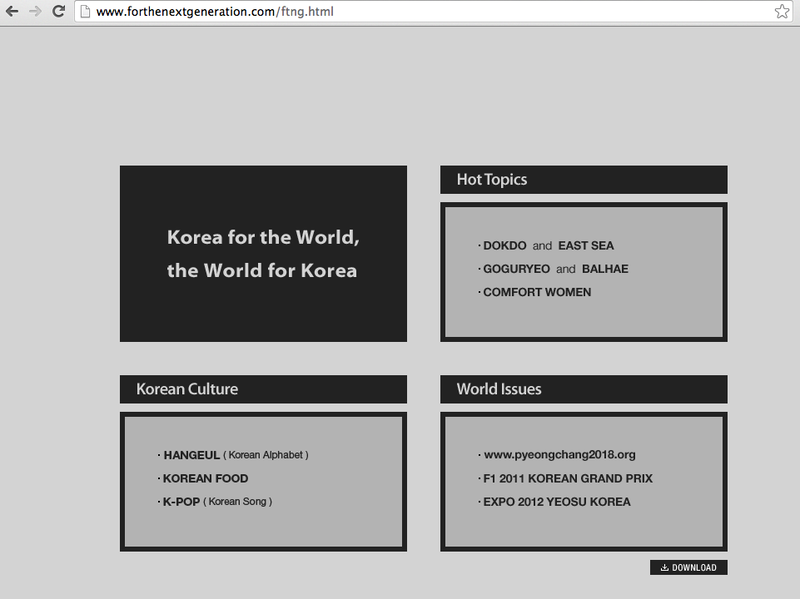 The bulgogi ad in The New York Times references this website. Via ForTheNextGeneration.com hide caption 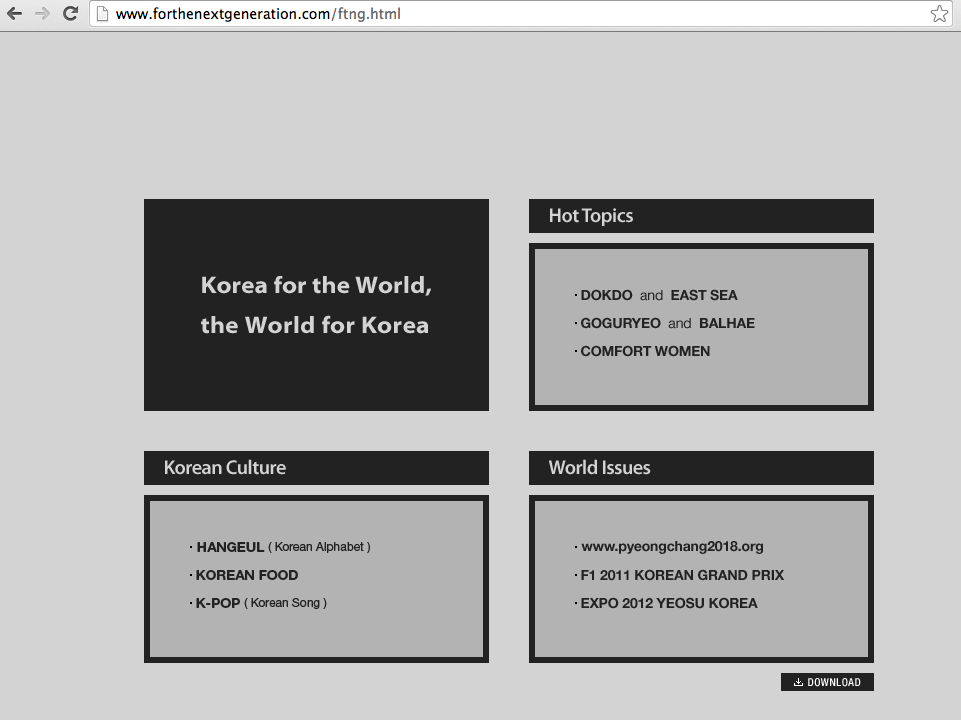 The bulgogi ad in The New York Times references this website.

I was stumped. So I invited strangers on Twitter to join me on a trip down the rabbit hole. I tweeted about the ad in the hope of getting some insight.

And I did. In retrospect, much of the insight provided by others should have been screamingly obvious to me.

"Did they hire my mom to write this copy?" asked @NatalieKimNYC. The ad does make more sense if you imagine it written by a nonnative speaker of English.

That the website included earlier ads from the same source dating back several years was pointed out by @18millionrising.

Among the ads was this arresting and beautiful and appetizing commercial promoting bibimbap:

There was an ad, too, about makgeolli, which is a Korean alcoholic beverage made from rice. The spot consists of a somewhat suggestive voice-over of the following text:

"Who are you?
I'm from Korea
I'm an oldie but a goodie
I'm made of rice
I have an excellent taste
I create an amazing time"

By this point, the bulgogi ad had begun to makes sense within the context of a series of advertisements promoting Korean food and drink. But I still didn't understand why the website, in addition, contains sections on comfort women and the territorial dispute between Japan and Korea over a group of small islands the Koreans call Dokdo and the Japanese Takeshima (a dispute that has extended to the Virginia state Legislature).

I called the New York phone number listed on the site and it jumped to voicemail. I left a message. I searched the Web for other places where the number appeared. And this was when it got curiouser and curiouser. The cellphone number appeared in a job ad from August 2012 for a Korean restaurant on Long Island. The restaurant was looking for a part-time server (the listed workday was 11 a.m. to 9 p.m., five days a week). I found the restaurant and texted a cell number listed on its website. No response. Yet.

I sent a note to the email address listed as the contact on the ForTheNextGeneration site, and first it bounced back as undeliverable. The email went through on a second attempt. No response. I searched for other mentions of the email, and that's when I got my first real break.

A professor Seo Kyoung-duk listed the contact email from the site as his personal email in one of his tweets. A link to ForTheNextGeneration.com was included in his Twitter bio. With the name in hand and a slightly different transliteration (Seo Kyung-duk), I was able to track down a number of stories that refer to efforts by the professor to promote Korean culture and interests abroad.

This report says the Sungshin Women's University visiting professor arranged to have the bibimbap ad run on a giant video screen in Times Square. For that matter, he is also apparently the man behind billboards in Uzbekistan. All of which pointed one last question: Who was picking up the tab for this international advertising campaign?

International BNT News (which describes itself as an "internet newspaper that is specialized in fashion, beauty, entertainment, and k-wave") apparently interviewed the professor (even though he is not directly quoted). The article states "the price of the advertisement was fully supported by Chicken Maru." There is a link to ForTheNextGeneration.com on Chicken Maru's homepage, and the bulgogi ad appears on Chicken Maru's Facebook page.

Together, the different bits and pieces of evidence are persuasive but not definitive. To be definitive, there would have to be a confirmation from The New York Times, Chicken Maru or the professor. But, for now, it seems likely that the professor produced the bulgogi ad, and that it was paid for by a Korean chain of fried chicken restaurants. (Maybe this is all an insanely clever and incredibly sophisticated inverse of Chick-fil-A's "Eat Mor Chikin" campaign.)

This year, professor Seo reportedly plans to expand his promotional efforts to Cairo, Egypt, and Almaty, Kazakhstan. Maybe the bulgogi ad campaign will make more sense in Arabic or Kazakh.