Accessibility links
What Do Jay Z And Shakespeare Have In Common? Swagger : Code Switch For our weekly word watch, we turn to "the idea of tremulous motion, swaying backwards and forward." Put another way, we are talking about swagger. 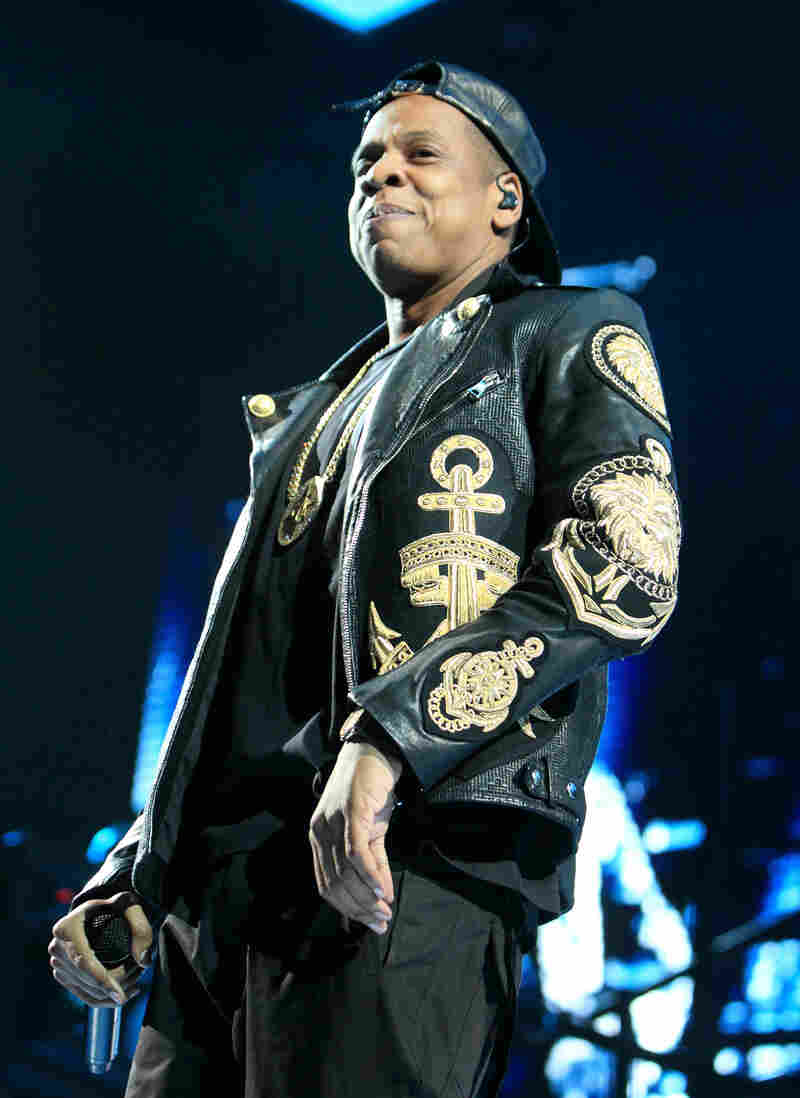 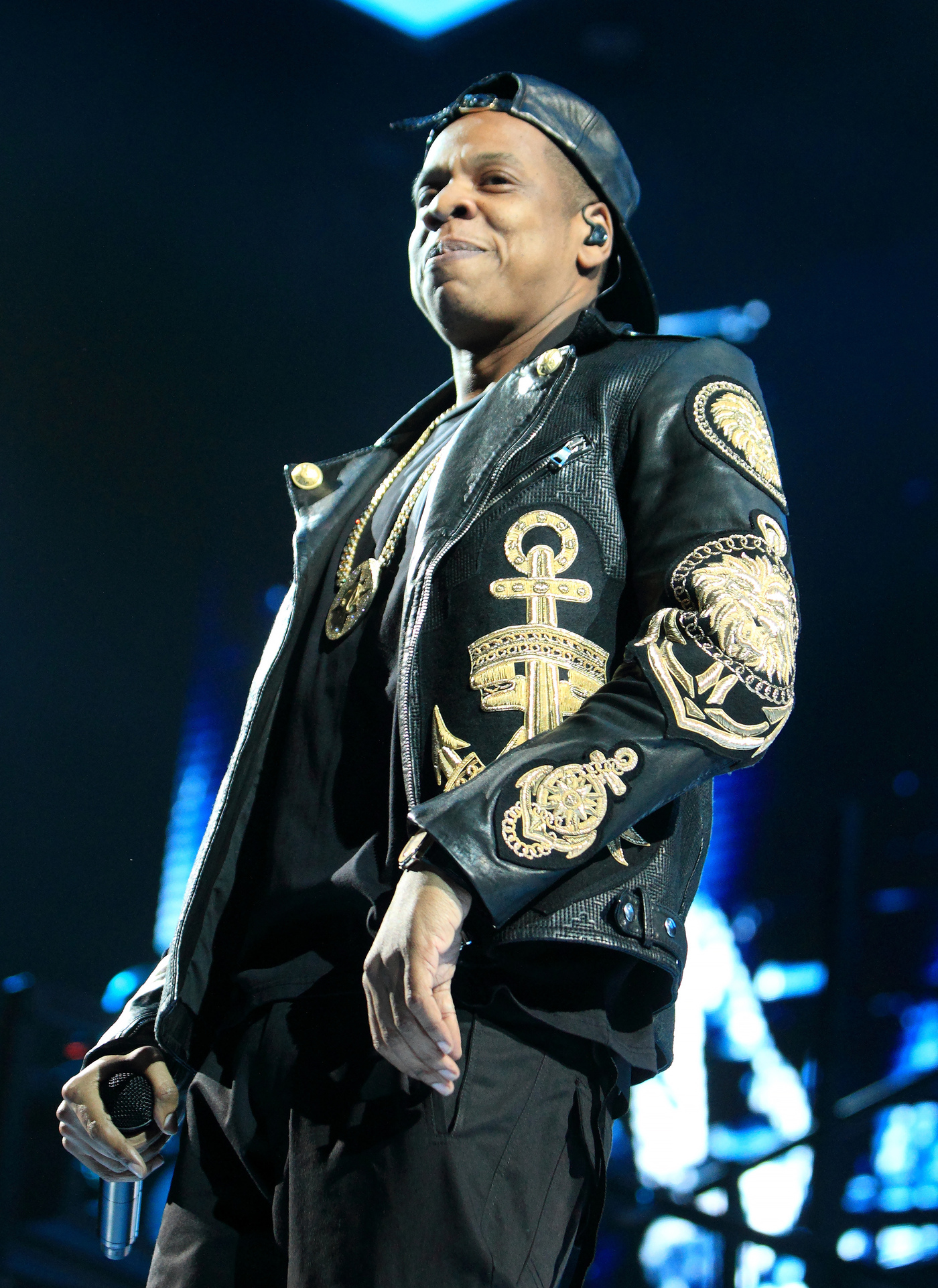 Jay-Z performs during his Magna Carter world tour this past January.

"No one on the corner has swagga like us," sang rapper M.I.A. in her global hit "Paper Planes." The song was later sampled by T.I. and Jay Z in their hit song "Swagga Like Us." A few years before that, it was Jay-Z who declared "I guess I got my swagger back" on his 2001 album The Blueprint.

The word swagger should be a familiar term to anyone who has listened to popular hip-hop songs in recent years; a recent search on Rap Genius turned up more than a thousand songs that used the word in the lyrics.

Given those stats, you'd be forgiven for thinking "swagger" is a relatively new concept, but it can be traced all the way back to Elizabethan England. As with so many other famous words and phrases, the first writer to use it was William Shakespeare. The playwright first had the "shrewd and knavish sprite" Puck use it in this monologue in A Midsummer Night's Dream:

What hempen home-spuns have we swaggering here,

So near the cradle of the fairy queen?

While there is a tiny hint in this usage that swagger is closely related to braggadocio and pride, it wasn't until Henry IV, Part 2 that the meaning was really driven home by the bard. It's in that play that the London innkeeper Mistress Quickly gives this speech about one of the overly aggressive and forward men who frequent her tavern:

If he swagger, let him not come here: no, by my

faith; I must live among my neighbours; I'll no

swaggerers: I am in good name and fame with the

very best: shut the door; there comes no swaggerers

here: I have not lived all this while, to have

swaggering now: shut the door, I pray you.

It's clear from this passage that swagger has two meanings — one that refers to drunken behavior, and another, more familiar one that denotes arrogance and (in the eyes of people like Mistress Quickly) an outsized sense of self-worth.

Jonathan Swift would also pick up this usage more than a century later, in 1726, with Gulliver's Travels, when he wrote that the Queen's Dwarf "would always affect to swagger and look big as he passed by me in the Queen's Antechamber ... and he seldom failed of a small Word or two upon my Littleness."

While the definition of the word would keep its judgmental connotations during the 1800s, in his 1865 dictionary, British etymologist Hensleigh Wedgwood defined the word in poetic terms, writing that it was "the idea of tremulous motion, swaying backwards and forwards ... commonly expressed by forms originally representing the sound made by the dashing of water."

By the 1870s, the word would take on the definition we know today — that is, as this 1872 dictionary puts it, "to boast or brag noisily." (Cultural critics have been declaring that "swagger" has been on the decline since at least 1892. A piece in the magazine Science that year called swagger "[t]he most obvious and disagreeable form of self-assertion, which consists of making other people conscious of their inferiority ... ")

But swagger, fittingly, was and is persistent. Definitions like the one in that 1892 article show how "swagger" was in many ways a natural fit for the hip-hop of the past two decades. According to Slate, the very first hip-hop artists to use "swagger" in a song were the group Brand Nubian in their 1990 song "Slow Down," where they note someone "used to walk with a swagger, now you simply stagger."

"Slow Down" would start a lyrical trend. As Ben Gabriel wrote in The New Inquiry three years ago:

Swagger is not new to hip-hop but has always been exterior to it. It recalls '70s rockers, '20s gangsters, pirates and Shakespearean vagabonds. The connotations are all, one might say, very white. But it is a very particular kind of whiteness — one which is very aware of itself and makes an explicit performance of its own economic or legal disenfranchisement.

Since then, the evolution of swagger has continued, and the word has been shortened to simply "swag" in recent years.

Apparently it's true, as Jay Z raps in "Otis," that the hip-hog mogul invented "swag."

But the award for the most gratuitous and random use of "swag" goes to rapper Souljah Boy in his song about Joseph Kony, leader of the guerrilla Lord's Resistance Army in Uganda, "Stop Kony":

Stop Kony
What do you think we should do about it?
We should stop him
We should stop who?
Him.
It's obvious that Kony should be stoppped.
The problem is that 99% of the planet doesn't know who he is.
Swag.
If they knew, Kony would have been stopped long ago.
Swag.