Accessibility links
Decades Later, A Medal Of Honor For Hispanic-American Hero : Code Switch President Obama will award Medals of Honor to two-dozen soldiers on Tuesday. One of them is Santiago Erevia, who risked his life in 1969 when he charged four North Vietnamese bunkers. 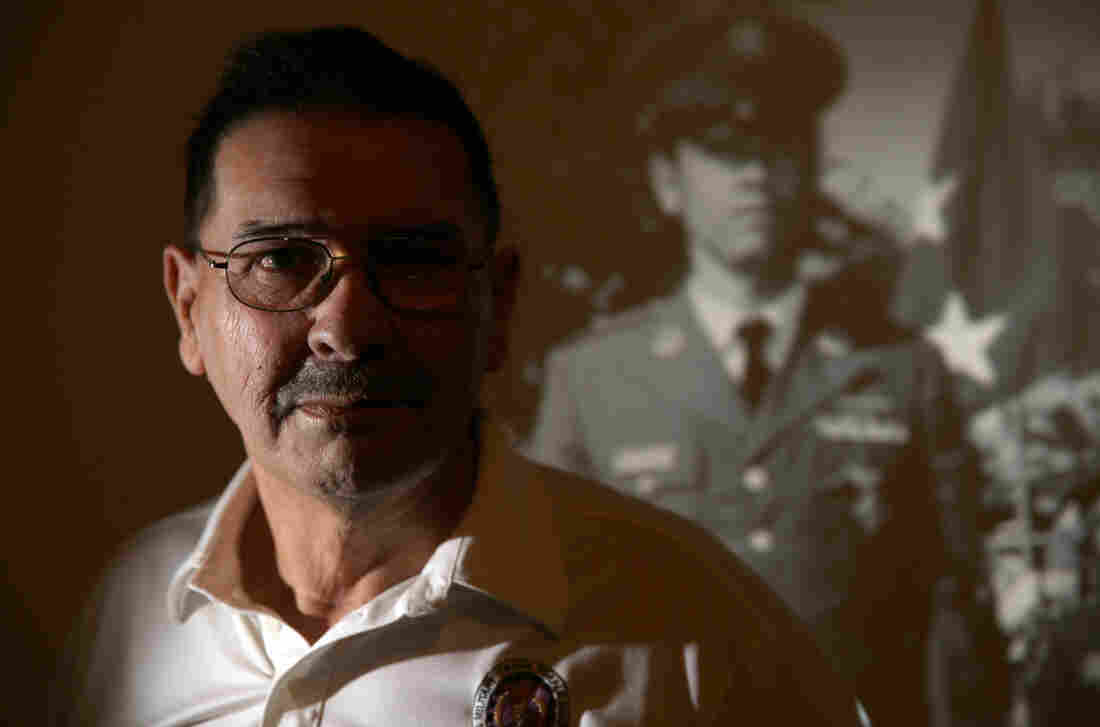 Santiago Erevia is one of only three living soldiers receiving a Medal of Honor on March 18. Behind him is a photo projection of his younger self in uniform. Joe Raedle/Getty Images hide caption 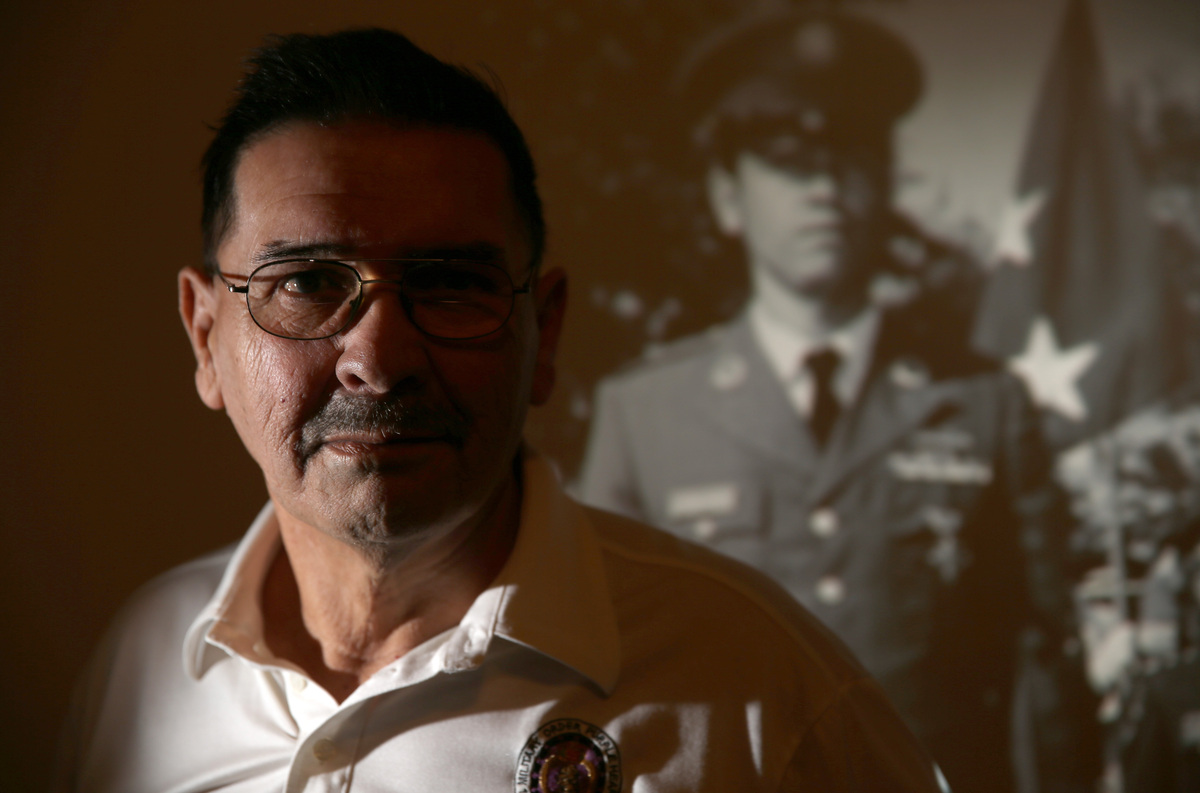 Santiago Erevia is one of only three living soldiers receiving a Medal of Honor on March 18. Behind him is a photo projection of his younger self in uniform.

At the White House on Tuesday, President Obama will award the Medal of Honor to two-dozen soldiers whose service ranged from World War II to the Vietnam War. These soldiers are being commemorated after congress mandated a review to make sure that no one was overlooked because of prejudice.

One of them is Santiago Erevia, who risked his life on a May afternoon in 1969, charging toward bunkers held by the North Vietnamese.

Here Are The 24 Heroic Stories Behind Today's Medals Of Honor

Erevia was a cook back in 1968, working in small restaurants in Nevada and his native Texas. He says he first decided to join the Army to better himself, and maybe go to school.

This was during the height of the Vietnam War — and his decision only became reinforced when one of his friends returned home horribly wounded.

"He was missing both ears, and lips and nose and part of his leg," says Erevia. "And so I said, well, poor kid, maybe I can do something to help him out."

Erevia's way of helping out was to continue his plans to enlist and fight, with a sense of fatalism.

"I had already made up my mind that I was going to sign up — what's meant to be is meant to be," he says.

Erevia signed up and arrived in Vietnam with the 101st Airborne Division. And then, in late May 1969, Erevia and the rest of Charlie Company loaded onto helicopters and swept low over the rolling hills and jungles. Helicopter pilots nicknamed the area Death Valley.

Two North Vietnamese regiments were dug in on the outskirts of Tam Ky, a market town on the South China Sea. The soldiers' job was to clear them out, but one of their reconnaissance platoons just disappeared into the jungle. That's when chaos erupted.

"This platoon came up missing. I got the orders from my battalion to attack," says David Gibson, then-commander of Charlie Company.

Gibson, Erevia and a few hundred soldiers stood at the edge of a rice paddy — they had to cross two hundred yards of open ground. The troops charged ahead, climbed a ridge and fanned into the trees.

Suddenly, North Vietnamese troops rose from the earth: from bunkers, from spider holes, from trenches.

Gibson remembers the North Vietnamese soldiers covered in branches and leaves to conceal themselves.

"Explosion after explosion — they were firing RPGs at us, throwing grenades and AK-47 fires," Gibson says. "You know, to this day I say it was a damn miracle; I don't know how any of us made it."

Gibson says he caught glimpses of Spc. Erevia just off to his left. Erevia and another soldier, Cpl. Patrick Diehl, slammed themselves against a tree for protection.

"Diehl stuck his head out and he got a bullet right in his forehead," says Erevia. "You know, I said, well, what am I going to do, just stay here and get killed?"

So Erevia left the cover of the tree and ran straight toward the North Vietnamese, hidden in bunkers.

"I zigzagged, firing my M-16," says Erevia. "I thought I was going to get killed instantly, you know."

Erevia says he was scared, but he just focused on what he had to do: take out the bunkers — with his grenades and rifle. There were four bunkers. And he had to take them down one by one.

That was the end of the battle. Erevia helped care for the wounded, and loaded the dead on helicopters.

"You just about have to be shot up or killed to get it," says Gibson.

That May afternoon outside Tam Ky faded to memory for Erevia — until his phone rang last summer.

"President Obama called me back in July of this past year," says Erevia. "He was looking into my citation and he truly believed that I should have gotten the Medal of Honor, and he was going to see that I would get the Medal of Honor."

This afternoon, in the East Room of the White House, nearly 45 years later, Obama will present that medal to Santiago Erevia.