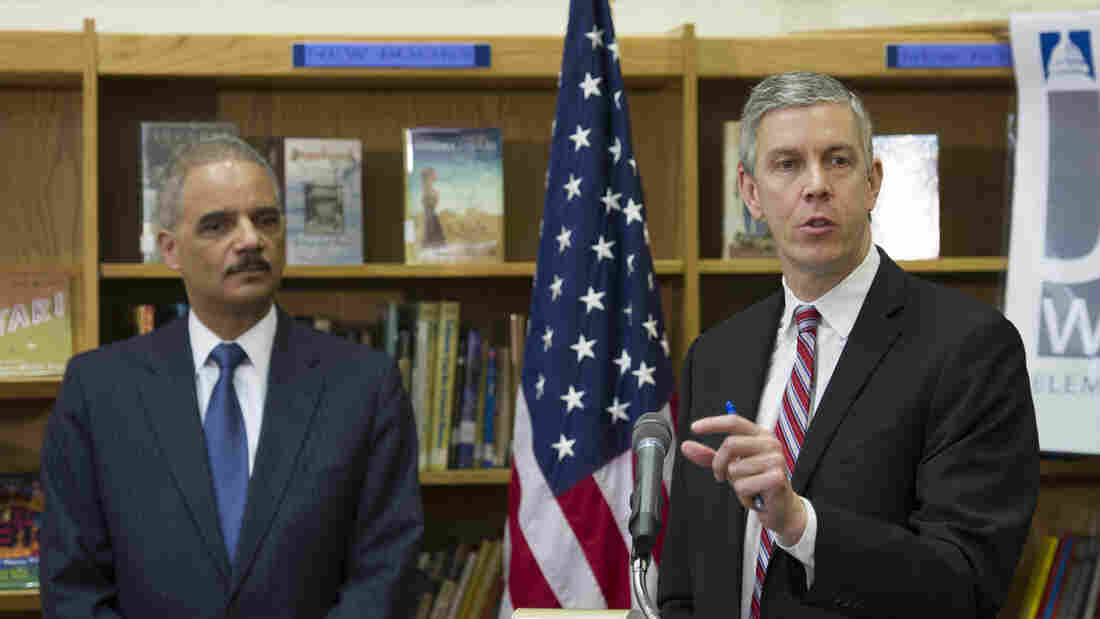 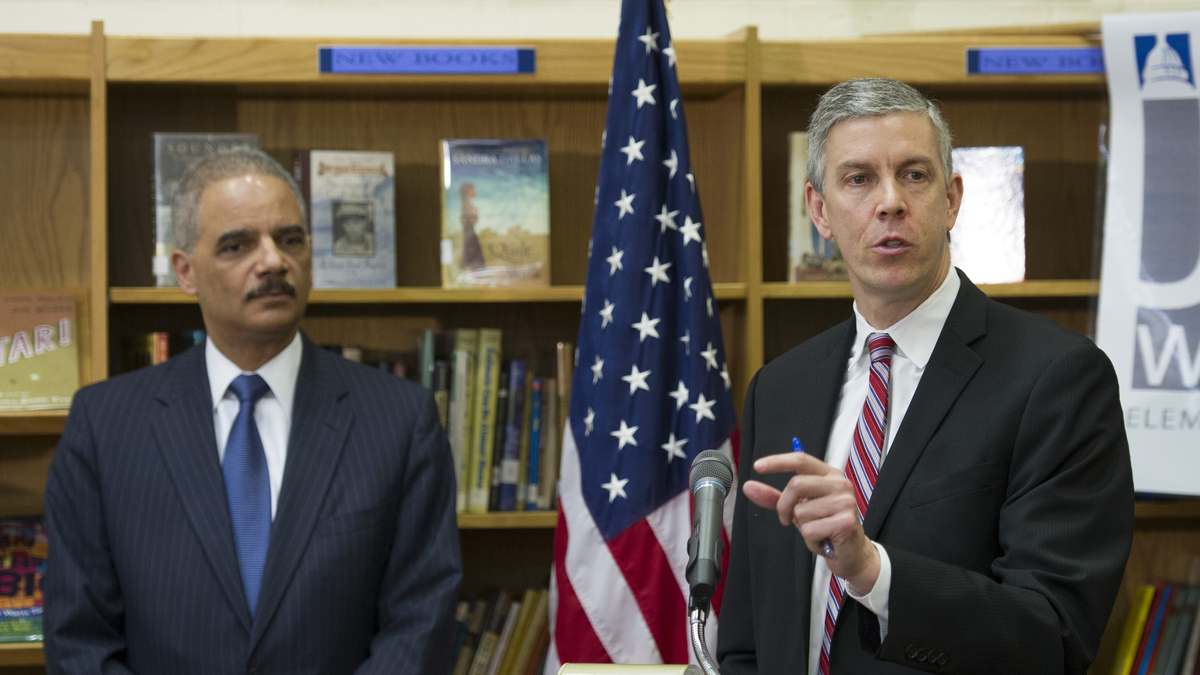 Education Secretary Arne Duncan, right, and Attorney General Eric Holder, appeared at a Washington, D.C., elementary school and said schools need to reduce "unnecessary and unfair school discipline practices and other barriers to equity and opportunity at all levels of education."

Here's what the education data show: kids who are suspended or expelled from school are more likely to drop out, and those dropouts are more likely to end up with criminal records. In many places, school discipline pushes kids directly into the juvenile justice system. Take just one example: a school fight can end in an arrest for assault.

Education and civil rights groups have dubbed this phenomenon the "school-to-prison pipeline." There are big racial differences in how school discipline is meted out: students of color are much more likely to be suspended or expelled that white students, even when the infractions are the same.

A new government study on discipline in the nation's public schools shows just how very early that gap is present. According to the report, black children make up 18 percent of preschoolers, but make up nearly half of all out-of-school suspensions. (We're talking mostly four-year-olds, people.)

The report doesn't specify why there are such glaring disparities in school punishment, much less why those begin in preschool.

But an interesting study released in February suggests a contributing factor. A team of Harvard researchers found that black boys faced harsher punishment because they're often perceived as older than they actually are.

"The study also involved 264 mostly white, female undergraduate students from large public U.S. universities. In one experiment, students rated the innocence of people ranging from infants to 25-year-olds who were black, white or an unidentified race. The students judged children up to 9 years old as equally innocent regardless of race, but considered black children significantly less innocent than other children in every age group beginning at age 10, the researchers found."

"The students were also shown photographs alongside descriptions of various crimes and asked to assess the age and innocence of white, black or Latino boys ages 10 to 17. The students overestimated the age of blacks by an average of 4.5 years and found them more culpable than whites or Latinos, particularly when the boys were matched with serious crimes, the study found. Researchers used questionnaires to assess the participants' prejudice and dehumanization of blacks. They found that participants who implicitly associated blacks with apes thought the black children were older and less innocent."

That information doesn't at all explain the preschool discipline gap, because the study's participants were looking at children who were at least a half-decade older.

In January, Attorney General Eric Holder criticized "zero-tolerance" policies that quickly involve the criminal justice system for infractions like truancy and smoking. "A routine school disciplinary infraction should land a student in the principal's office, not in a police precinct," he said.

He called on schools to find other ways to discipline students that didn't remove kids from school for long stretches of time. He urged that school suspensions and expulsions happen only as a last resort.