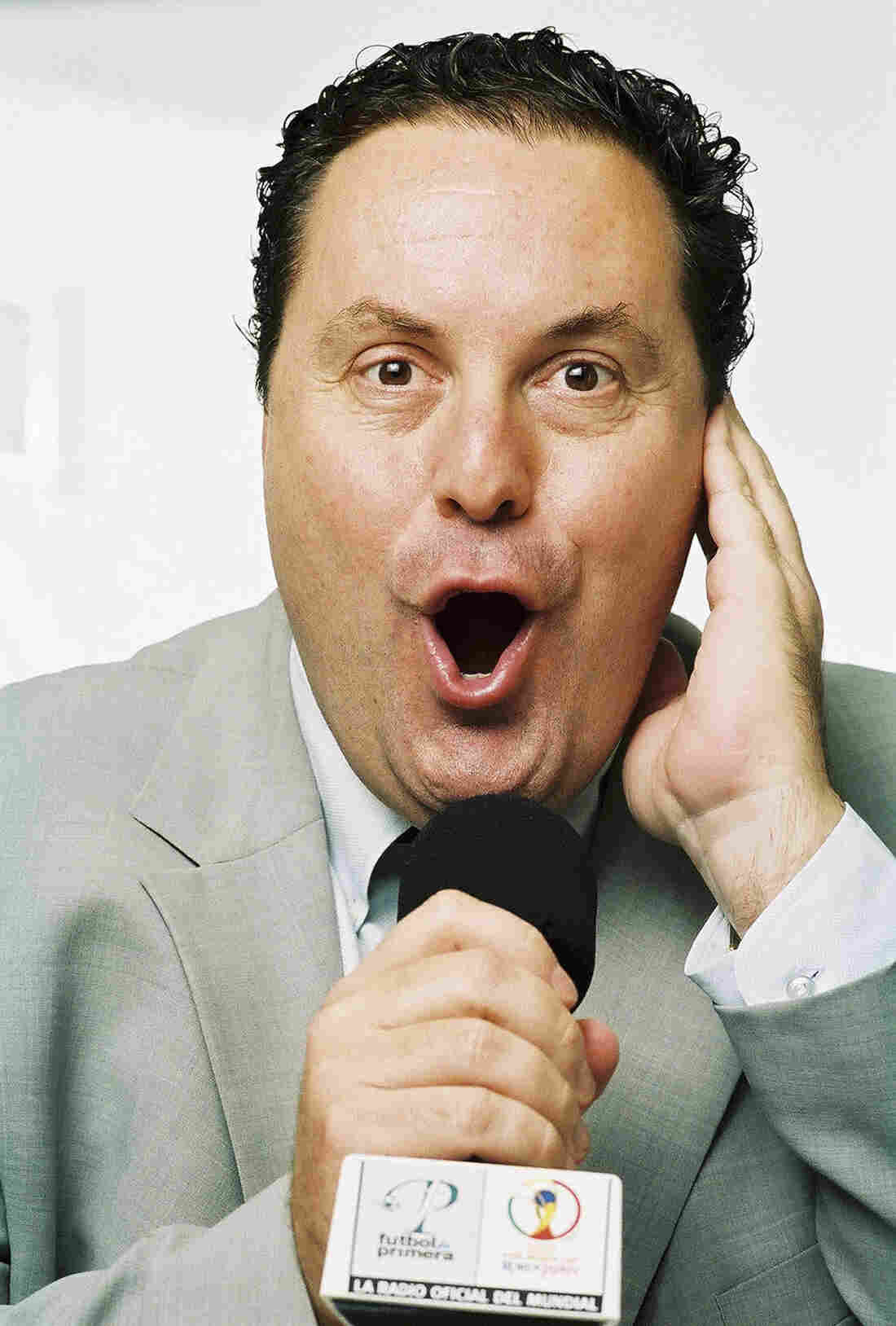 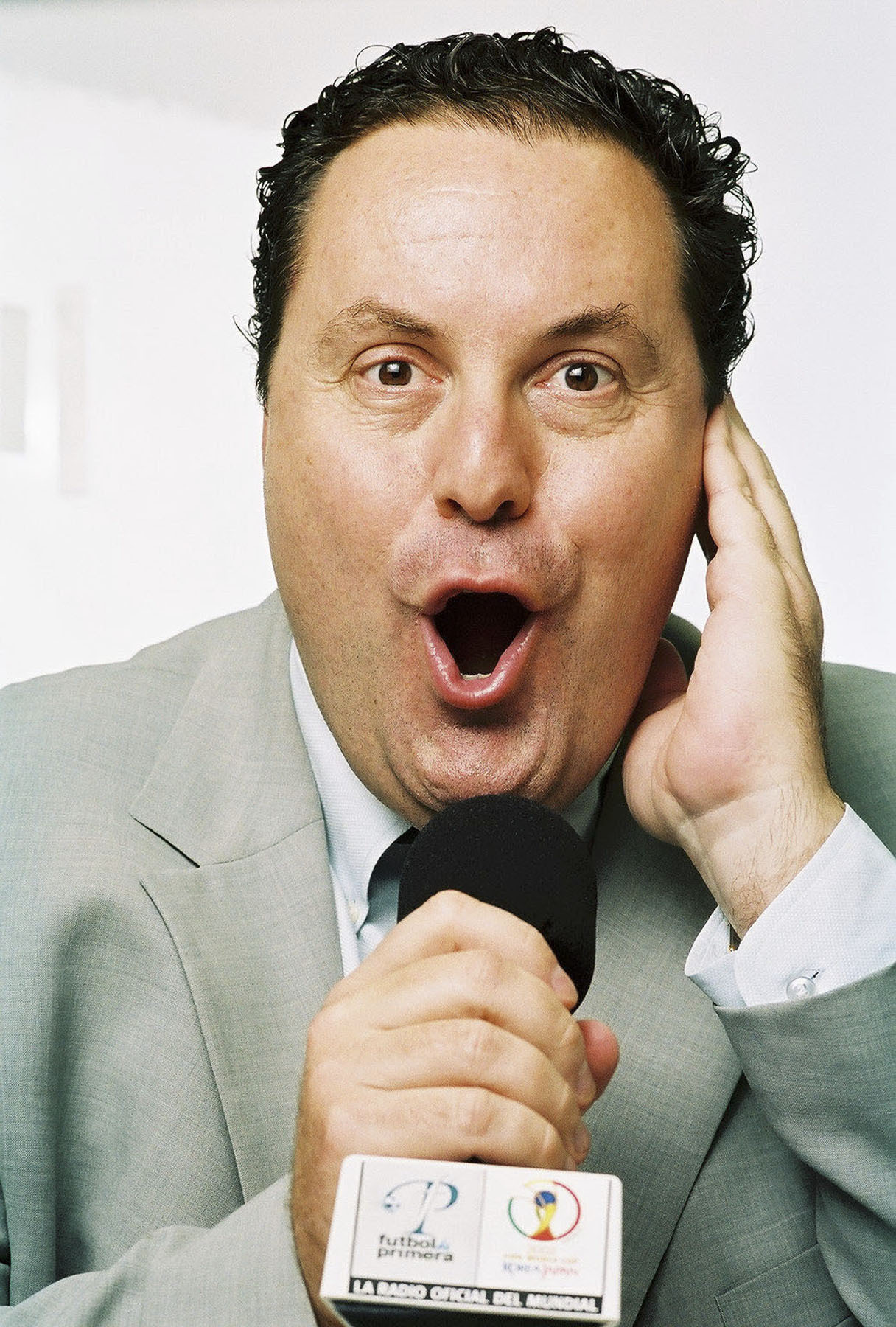 This year was never about the Olympics.

For most people in the world — and for young Americans especially — 2014 is all about the World Cup in Brazil, which is now just 78 days away.

For decades, the World Cup has been transmitted in America in two languages, and this year will be no different. The event will air in English on ESPN and in Spanish on Univision. For many, choosing between one and the other might seem a straightforward decision. After all, the World Cup is transmitted through a single global signal — every broadcast around the world shows the same image at the same time. 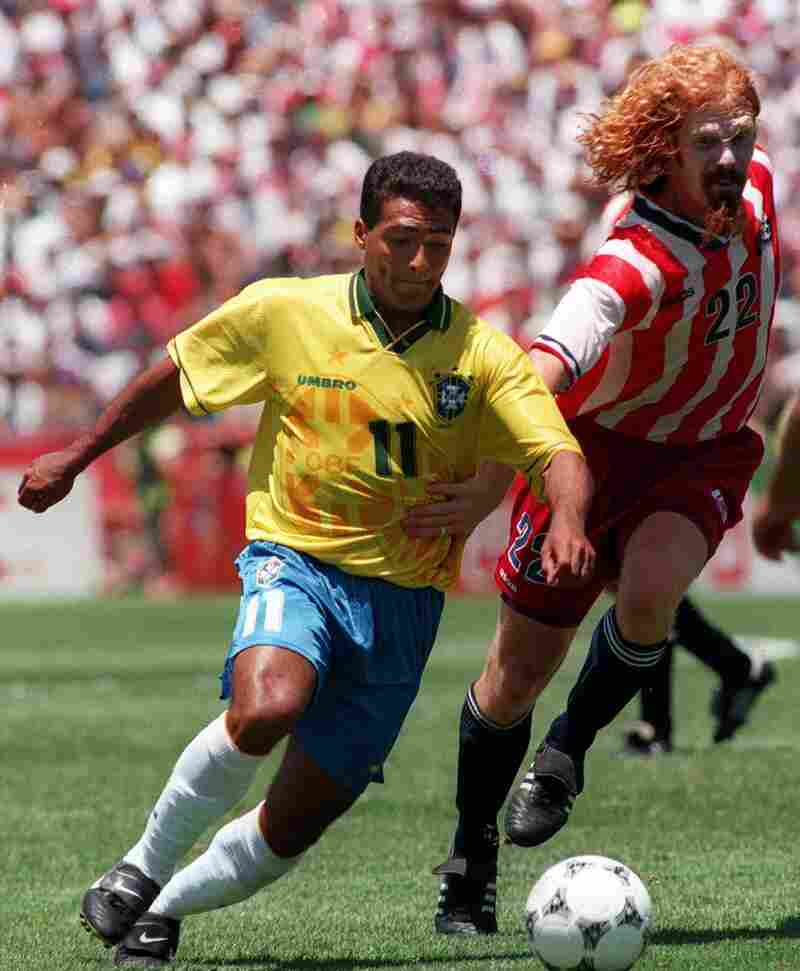 Alexi Lalas never caught up to Brazilian forward Romario. In 1994, the U.S. National Team made it past the group stage but was defeated in the following round by Brazil, the eventual champion. AP hide caption 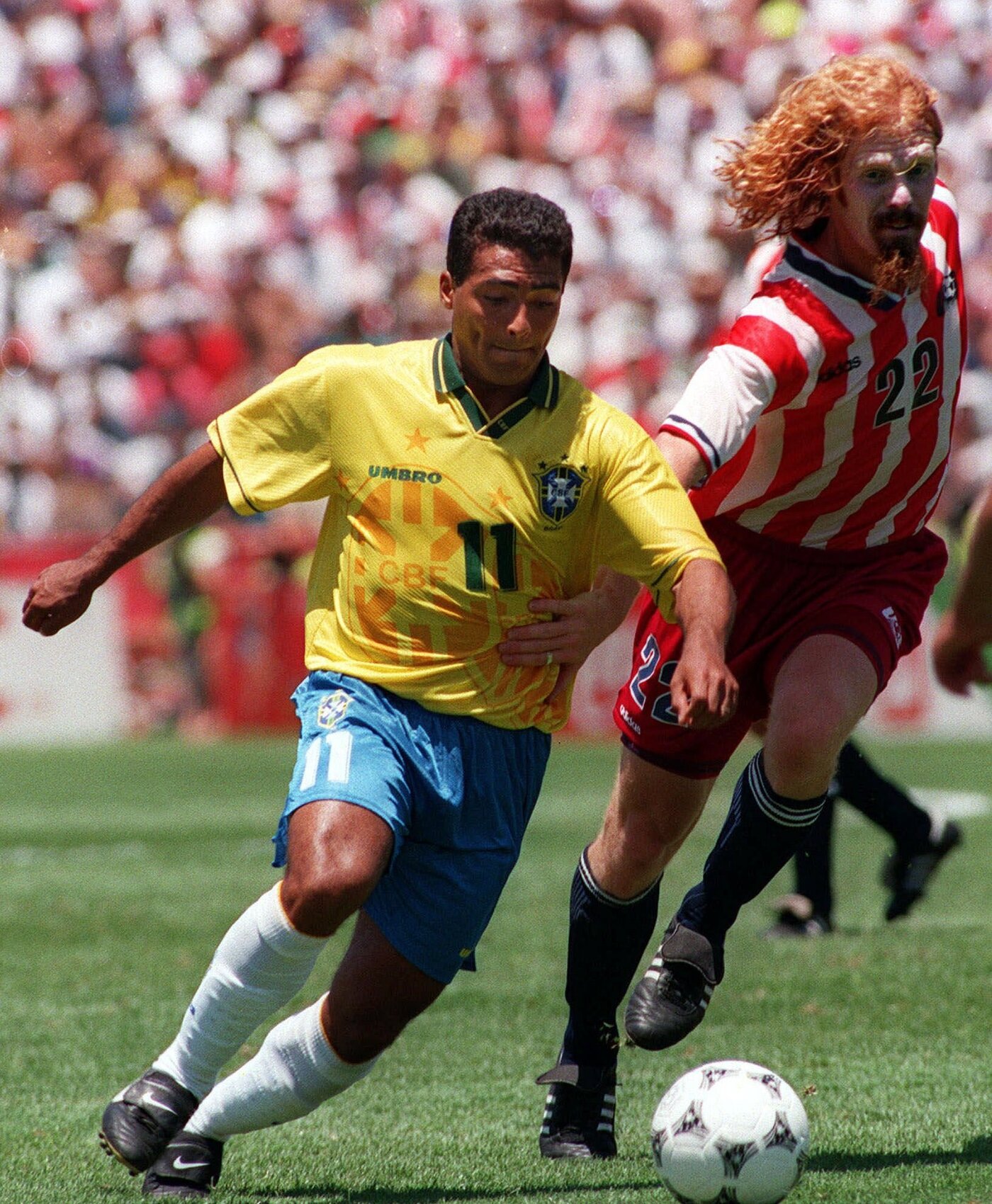 Alexi Lalas never caught up to Brazilian forward Romario. In 1994, the U.S. National Team made it past the group stage but was defeated in the following round by Brazil, the eventual champion.

But that's not necessarily the right assumption.

When soccer first began to gain traction in this country (and English-language soccer broadcasts in the U.S. were a long way from being polished), many fans deliberately watched the game in a language they didn't understand.

I am talking about 1994, when America hosted the tournament. Brazil 2014 will mark the 20th anniversary of that tournament — and yes, that's a huge deal. As former U.S. international defender Fernando Clavijo told ESPN, USA '94 was when "the United States pretty much recognized the sentiment for the first time."

But at the time, as many in America marveled at the home team's record-breaking performance, a large portion of the country's English-speaking population was more excited about another sort of sentimental discovery, one that was less about athletics, maybe more about linguistics — and all about emotion.

In an article for The Washington Post, Steven Goff described it as a "combination of technical wizardry, imaginative transportation arrangements and flat-out endurance."

Many just called it "Spanish commentary" — the Latino-style, Spanish-language narration of soccer matches.

And it changed the country's soccer culture.

At the time, New York Times sports writer Richard Sandomir wrote that he had one "rule of soccer announcing: all games should be broadcast in Spanish or Italian." In another article he inquired:

"Is it any wonder that many sane people I know sought out soccer passion from Univision's Andrés Cantor — in a language they didn't understand?"

Ana Williams, a linguist and professor at Northwestern University's department of Spanish and Portuguese, says understanding — in the conventional meaning of the word — didn't and doesn't have much to do with it at all.

"Why do we need someone to tell what's happening if we're watching?" she asks. "The sensation of belonging, to have someone there feeling with you — that's passion."

You might want to turn down the volume before you hit play.

Williams has studied different styles of soccer commentary for years. She says the image that reaches our screens is a combination of three separate experiences: the event as it takes place at the stadium, its capture as portrayed through the lens of a camera, and then the final broadcast, which mixes in sound, production values and, of course, commentary.

This final step, she says, is a separate portrayal of reality — a sort of simulacrum built through different forms of language. And that's the one we ultimately absorb.

"Emotion is expressed by the words as well as the tone," says Williams. "Commentators have to transform soccer into art — not everyone can do that. You have to have a talent to put these words together."

That's what most of America first realized in 1994. Back then, soccer wasn't that popular outside of Hispanic communities. Even with the world's most televised event taking place in its own backyard, the U.S. struggled to grow fond of a broadcast that many viewers thought was boring.

And that's when many discovered Univision and Spanish-speaking commentator Andrés Cantor.

"People who didn't fully understand Spanish switched to Univision because of a way of interpreting the game," says Cantor, "and, let's say, the passion of the Hispanic commentator."

Cantor was Univision's lead World Cup announcer throughout the '90s, and his voice would shatter the airwaves. During the 1994 tournament, non-Spanish speakers flocked to his Spanish-language broadcast for their World Cup fix — and they loved it. He turned plays into action, halftimes into heart-pounding reliefs.

This Geico commercial asked if Andrés Cantor could make any sport exciting.

That year, Cantor would receive a Regional Emmy and be named Sports Personality of the Year by the American Sportscaster Association.

By the time the next World Cup was starting, Goff would write in the Washington Post:

"Some English-speaking soccer fans in the United States apparently have turned to Univision, and away from English-language broadcasts on ABC, ESPN and ESPN2, because of the energy and lyrical flair [Andrés] Cantor and longtime broadcast partner Norberto Longo bring to their description of, and commentary on, all the games."

Their style would become a mainstay of both soccer and popular culture. Over the years, Cantor's voice would be featured everywhere: from The Late Show, to movies, to TV commercials — even as the ringtone of an alarm clock.

But Cantor's impact went beyond that of his cult-idol status. After 1994, English-language soccer coverage would significantly evolve — adopting various elements of Hispanic-style narration.

In part, this is because many of today's soccer fans were drawn to the sport by Spanish-language commentary. Like Richard Sandomir and Steven Goff, many of the industry's best-known journalists cite Cantor's announcing in the '90s as a prominent influence.

In an article for Sports Illustrated, senior writer Grant Wahl wrote that Cantor's calls had made him fall in love with the game.

Chants and vuvuzelas at a World Cup watch party in Washington, D.C.

"I really enjoyed hearing the way he called the game and how excited he made me feel," Wahl told me on the phone. "Even if the game itself wasn't the most exciting game, his passion for the game came through."

Aaron DeNu, a researcher who organizes World Cup watch parties in Washington, D.C., says the change in these networks is even audible in the transition of their words.

"The broadcasts are no longer a formulaic broadcast," says DeNu. "They are more poetic and fluid and passionate."

And the poetics and fluidity DeNu talks about might represent, in and of themselves, an affinity for foreign style and culture. With time, America has grown fonder of foreign talents — and their styles — and, yes, their accents.

Juan Arango, a soccer writer and play-by-play announcer, says that, for a long time — especially before the sport was well-known in America — a British accent was automatically associated with knowledge of football (or fútbol, or soccer). Similarly, Hispanic-sounding accents now seem to carry their own tacit connotations.

Throughout the years, ESPN, the network in charge of this year's World Cup English-language broadcast, has remodeled its style, bringing in talents and guests from Europe and Latin America. For last year's Confederations Cup, it enlisted six leading announcers for its commentary team; only one of them was American-born.

Arango, a son of Colombian immigrants, says it's all a matter of taste, but he prefers intensity in his calls. Even though he calls his games in English, he draws on the influence of Cantor and other Hispanic commentators for his work.

"For me, I didn't hear my first English-commentated football match until 2000," Arango says.

As they transition and diversify their cast, ESPN has seen increases in soccer viewership, even among Hispanic households — which hasn't kept Univision from increasing its ratings, either. For the last World Cup final, both networks combined reached 24.3 million viewers — the highest figure ever recorded for a soccer game in the U.S.

"This tells you there are two possibilities of watching the same game in American networks," Cantor says. "And that's already a plus."

Ana Williams, the linguist, says commentators, more than anything, have to "seduce" viewers by appealing to a particular emotion.

"The feeling of belonging is the most important thing," Williams says.

But just how important?

Nate Berg, an American journalist, was in South Africa during the summer of 2010 — and from there, he wrote an article titled "In South Africa, Missing My Favorite Univision Announcer." He was at the very site of the World Cup, and yet he missed watching the World Cup on an American TV broadcast — and, yes, in Spanish:

"One of the only bad parts about being here in South Africa for the World Cup is missing out on Univision's Spanish-language coverage.

"I should probably note that I don't speak Spanish. Not fluently, at least. But I vastly prefer watching my fútbol en español."

I called Berg — and he told me he hadn't really thought much about where this came from. In part, he says, he simply missed the passion of Hispanic commentators. But those voices were also a link to his past, growing up.

"I'm from California, and that's sort of what I grew up with — soccer wasn't that big of a deal in American broadcasting," Berg told me. "Growing up for me, as a kid, if I was going to watch soccer, it was going to be in one of the Spanish-language networks."

So maybe that's what Williams meant by a feeling of belonging — how a voice or a language can take us — or bring us back — to a place in time, or in space.

"It's a simulacrum that takes my eyes, my culture, my listening, my ways of seeing things," Williams says.

And, in the end, it might just be that, for many other Americans, it is precisely this multilingualism that sounds the most like "home."