Accessibility links
For Native Americans, Losing Tribal Membership Tests Identity : Code Switch For nearly 30 years, Jade Unger's family was embraced by a tribe. Then, in September, everything changed when the tribe's enrollment committee said they were enrolled in error. 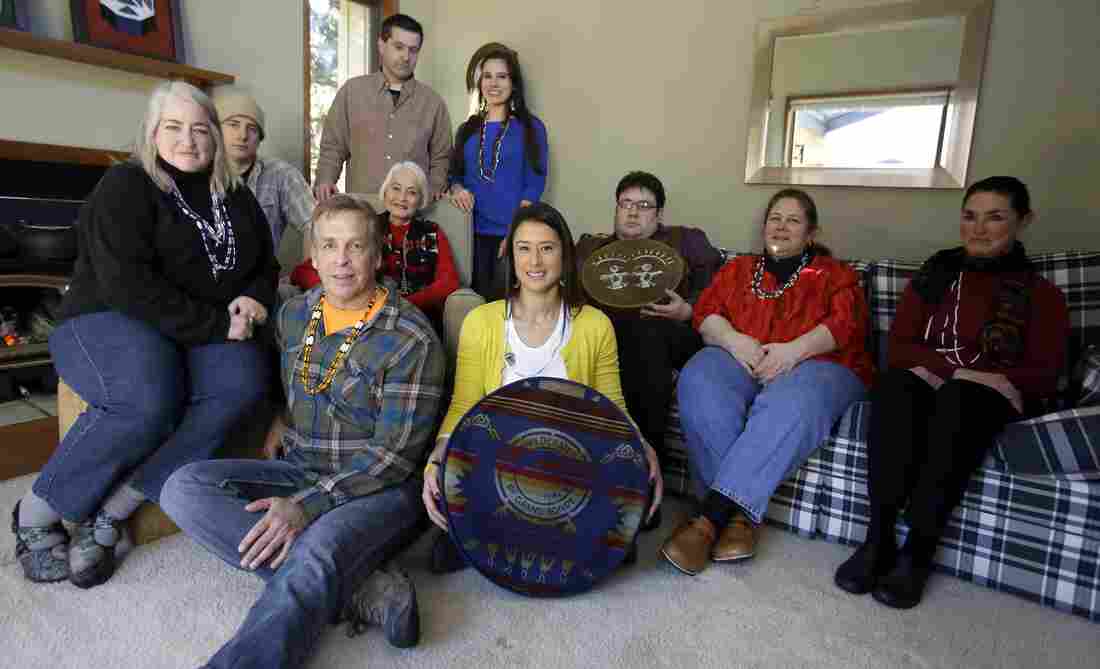 Some of the 79 people told by the Confederated Tribes of Grande Ronde that they were enrolled in error. Seated on the floor are Russell Wilkinson (left) and Mia Prickett. Seated second row (from left) are Nina Portwood-Shields, Jade Unger, Marilyn Portwood, Eric Bernando, Debi Anderson and Val Alexander. Standing are Antoine Auger (left) and Erin Bernando. Don Ryan/AP hide caption 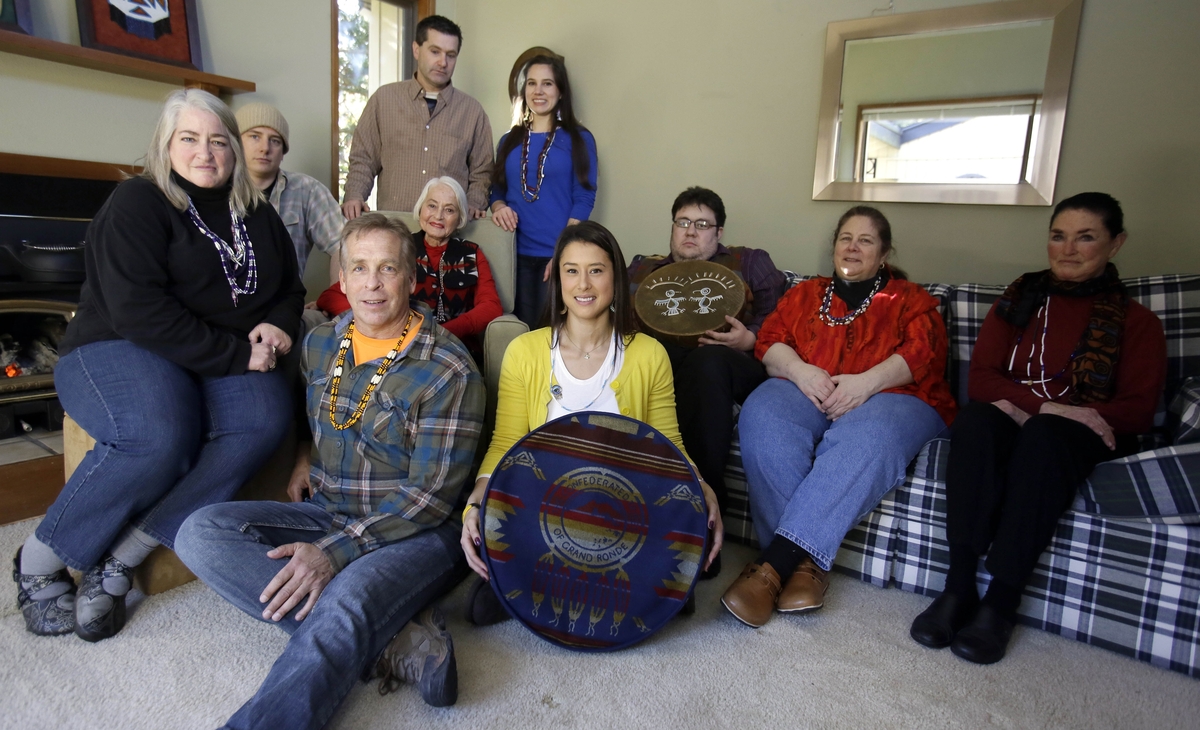 Some of the 79 people told by the Confederated Tribes of Grande Ronde that they were enrolled in error. Seated on the floor are Russell Wilkinson (left) and Mia Prickett. Seated second row (from left) are Nina Portwood-Shields, Jade Unger, Marilyn Portwood, Eric Bernando, Debi Anderson and Val Alexander. Standing are Antoine Auger (left) and Erin Bernando.

In western Oregon, members of the Confederated Tribes of Grand Ronde are engaged in a debate over what it means to belong.

The tribe's enrollment committee is considering kicking out an entire family that traces its lineage back to the founding of the modern tribe more than a century and a half ago. The family is related to Chief Tumulth, leader of the Watlala, a tribe that controlled river traffic along a key section of the Columbia River.

"If you search for 'Chief Tumulth,' you'll find that he's, as some people claim, the most famous Chinookan chief that there ever was," says Jade Unger, Tumulth's great-great-great-great-grandson.

After Unger heard about Chief Tumulth as a teenager he began to study the tribal language, Chinuk Wawa, and learned the traditional methods of hunting and fishing. Studying his ancestors, he began to learn about himself.

Eventually, Unger was enrolled at the Confederated Tribes of Grand Ronde. In 1855, his ancestor, Chief Tumulth, played an early role in the confederation's founding by signing an important treaty with the U.S. government.

Unger says for nearly 30 years his family was embraced by the tribe — that is, until last September, when everything changed. The tribe's enrollment committee told Unger and 78 members of his family that a recently completed audit showed they were enrolled in error.

Back in 1995, the tribe opened its Spirit Mountain Casino, and for the first time, members began to see a financial benefit. Within a few years, the tribe began to tighten its enrollment requirements. In fact, under the new standards, Unger's family wouldn't be let in today.

His ancestor may have signed a key treaty in the formation of the Grand Ronde, but Chief Tumulth was killed before the reservation was officially recognized in 1857. Unger says that information was well-known to the committee members who approved their applications.

"There was no error," Unger says. "It was very deliberate, and it was unanimously agreed upon that we had a background and we had a right to belong here in this tribe."

Tribal Council Chairman Reynold Leno wouldn't discuss pending cases. But he says the audit was needed to correct inconsistencies in the tribal record.

"Tribes are made up of families, and families know their own history," Leno says. "And when you have people that don't kind of fit into that family-type scenario, it kind of draws a question. And I think that's what a lot of people wanted looked into."

While he says any disenrollments that result from the audit are unfortunate, he says the tribe has a constitution — and it's his job to uphold it.

"It was given to us by the Supreme Court to set standards and regulations for our enrollment, and I think people should respect that," Leno says.

But both in and outside of Oregon, disenrollments are raising questions. David Wilkins, a professor of American Indian Studies at the University of Minnesota and a member of the Lumbee Nation, estimates that as many as 8,000 U.S. citizens have been cast out of native tribes over the past two decades. And Wilkins worries that tribal disenrollments could be putting tribal autonomy in jeopardy.

Grand Ronde is still reviewing the results of the audit, which means more disenrollment letters could go out.

Unger acknowledges he might lose his federally recognized status, but he says nobody can take away his identity as a native person.

"That's, hands down, way more important to me than any little chunk of money I might get in a per capita payment," Unger says. "I don't care about that. I care about my tribe. I feel like I belong. We belong."

And Unger says that's the one thing he wants to hold on to.