Accessibility links
Stereotypes Of Appalachia Obscure A Diverse Picture : Code Switch Appalachia has become a familiar shorthand for rural, white Americans, typically in poverty. But in reality, the region has a rich ethnic history and a rapidly diversifying future. 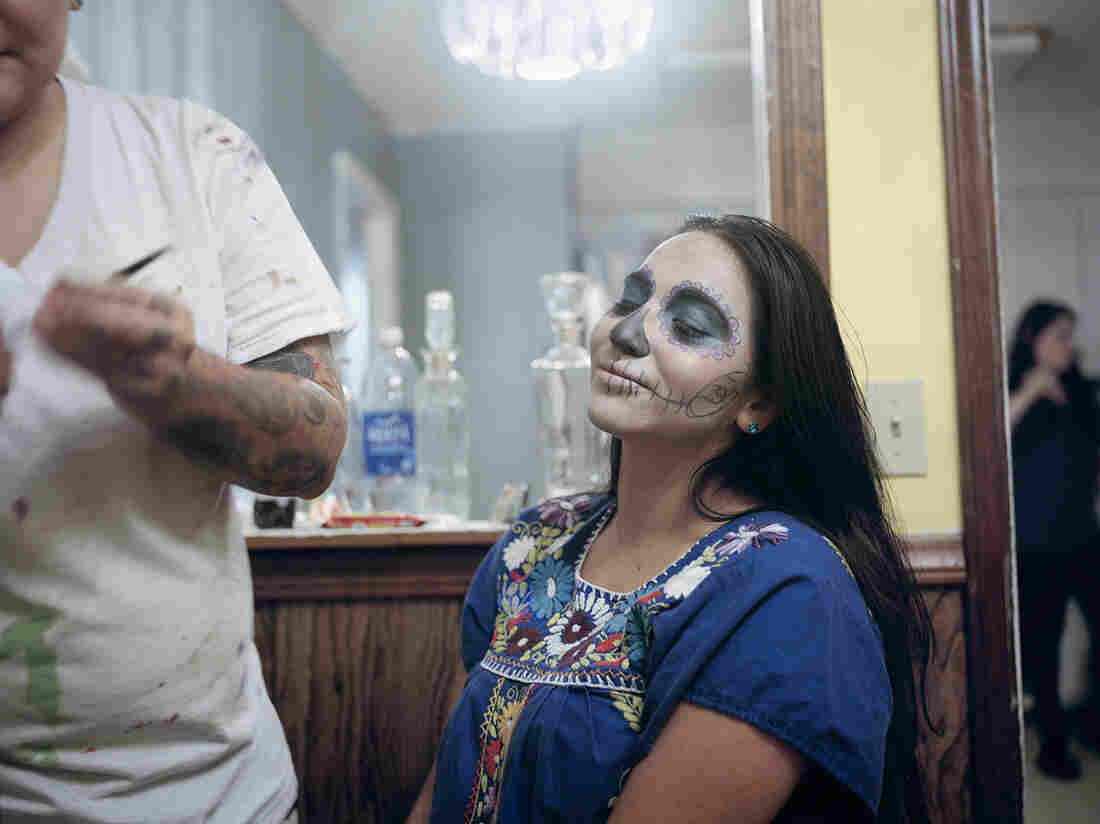 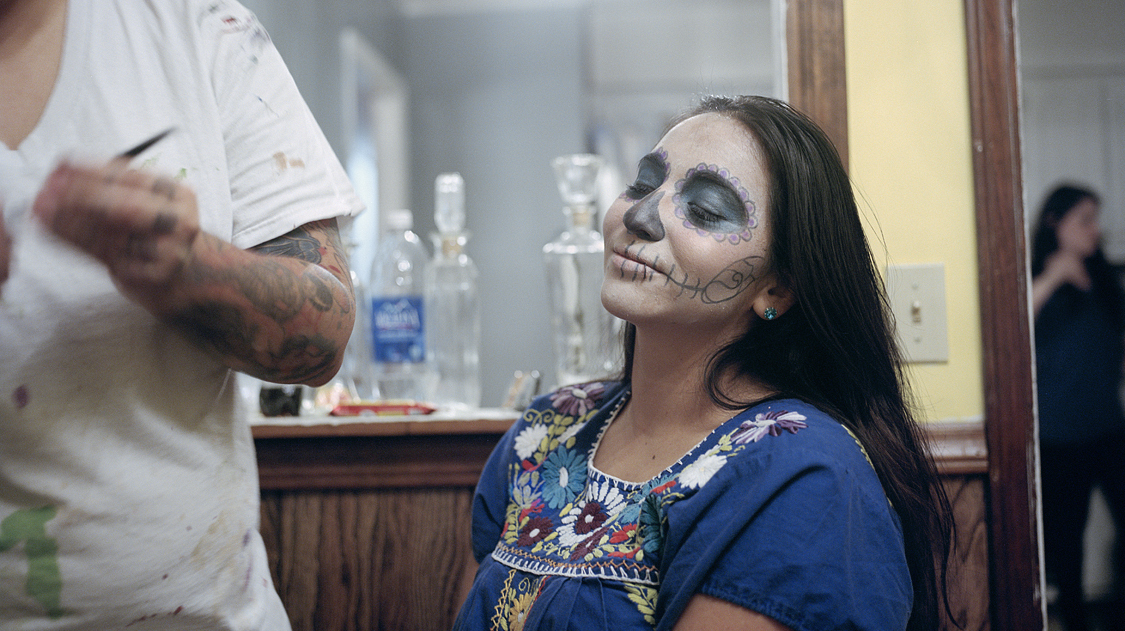 Anai Saucedo has her face painted with makeup in the Dia de los Muertos tradition in Erwin, Tenn.

When policymakers and news organizations need a snapshot of rural poverty in the United States, Appalachia — the area of land stretching from the mountains of southern New York through northern Alabama — is the default destination of choice. Poverty tours conducted by presidents from Lyndon Johnson to Richard Nixon, almost every member of the Kennedy clan, and religious leaders like Jesse Jackson have all painted the portrait of Appalachia the same way: poor, backward, and white. 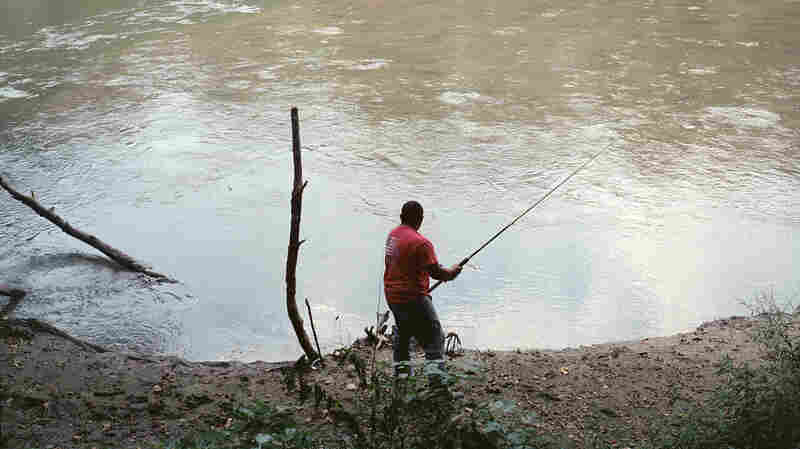 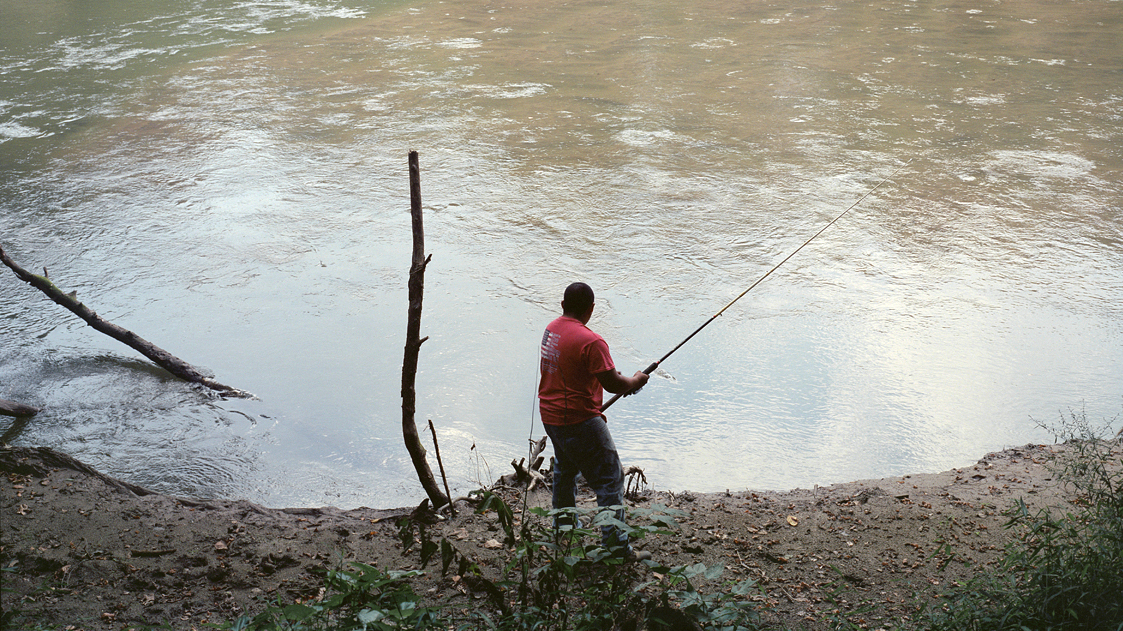 "When we tell the truth about Appalachia, it's only then that we tell the real story about who we are," said Aaron Thompson, executive vice president and chief academic officer for the Kentucky Council on Postsecondary Education.

Growing up as an African-American outside Manchester, Ky. — a coal town home to the lowest per capita income in the state, according to US census data — Thompson has become one of the few outspoken role models for young people of color in his mountain home. "There's no one story of Appalachia, no one voice. It's time for everyone to feel like they can speak up, like their story is important."

The region's population growth is increasingly fueled by minorities, who have composed almost half of Appalachia's new residents (42 percent) over the past three decades and helped fuel awareness about the heterogeneous reality of mountain towns.

Appalachia's history as a mountainous melting pot dates to before the Revolutionary War, when the region's misty crags were an almost impenetrable Western frontier. Indian nations, including Cherokee and Shawnee, were the first to inhabit the area. A major wave of European settlers — primarily of Irish and Scottish descent — arrived via federal land grants in the early 18th century. African-Americans, both free and enslaved, arrived at this time as well. All these groups played key roles in shaping and molding the cultural traditions of the region.

African-Americans made up more than 10 percent of the region's population by 1860, with Appalachia's ethnic profile shifting dramatically as multiracial families boomed. (Later, those with blended Scots-Irish, Native American and African-American roots would come to be known as Melungeons.)

There's no one story of Appalachia, no one voice. It's time for everyone to feel like they can speak up, like their story is important.

In the years following the Civil War, former slaves migrated north to the region to escape the persecution of the Deep South. In Eastern Kentucky, Berea College opened its doors in 1867 to students of all races, with the first year's class totaling 187 students: 96 African-American and 91 white.

The coal crescendo during the early part of the 20th century brought in even greater diversity, with tens of thousands of Hungarian, Italian and Eastern European immigrants flocking to the mountains to cash in on booming mining towns. After the Great Depression, many of these immigrants — along with African-American families — moved to urban centers such as Cincinnati and Detroit in pursuit of more stable and less backbreaking work. These pioneers were some of the first to create "urban Appalachian" enclaves, spreading the traditions of an isolated region to metropolitan areas across the Midwest.

This fusion is most obvious in Appalachia's signature food and music. As Rachel Ellen Simon describes in an article for The Appalachian Voice, the African akonting was a precursor to the banjo — the instrument now synonymous with the region's plucky, twangy bluegrass sound. Spoonbread, chowchow and succotash all point to both African and Native American influences and are celebrated as culinary specialties of the area.

Despite a long history of ethnic diversity, racism continues to be a problem in the region, particularly as Hispanic communities grow larger. According to reports from the Appalachian Research Commission, African-Americans remain the region's largest minority (bucking a national trend) and make up about 9 percent of Appalachian residents. But Rachel Ellen Simon calculated that the region's Latino population — which composed just over 4 percent of Appalachians in 2010 — has increased by more than 240 percent over the past 20 years. Still, the stigma associated with transient migrant workers remains.

"Even though Hispanic families have been here for decades, they're definitely still unfairly targeted," said Megan King, a photographer whose work captures portraits of Latino families in and around Johnson City, Tenn. "When I was at the police station one day photographing a couple of [Hispanic] cops, a call came in and said that two Latino men were trying to steal a police car. It was the officers I was photographing — it was their police car."

From the beginning, the topography of Appalachia has proved to be a double-edged sword. The hard-to-maneuver hills and valleys have created a wholly unique, blended culture and communities with remarkable closeness, but also a level of outsider skepticism and self-imposed isolation that have plagued progress in many areas, from economic growth to health care.

"People in Appalachia are more concerned about kinship than skin color," said Thompson. "When my high school was integrated, it was a struggle the first couple of years. By senior year, I was class president and prom king. That initial fear of the unfamiliar — whether it's people of another race or any outsiders— looms large."

While there still is a way to go, a less whitewashed portrait of Appalachia seems to be gaining a foothold nationally, thanks in part to the efforts of scholars and grass-roots organizations. The term "Affrilachia" — a portmanteau of "African" and "Appalachian" coined by Kentucky poet laureate Frank X Walker — has brought together a loose collective of multiracial artists previously excluded from conversations about what it means to be an Appalachian. The word is now an entry in the Oxford American Dictionary, second edition. In 2005, as Simon has noted, Appalachian State University professor Fred Hay successfully petitioned the Library of Congress to change the definition of Appalachians from "Mountain Whites" to "Appalachians (People)."

That movement toward a more holistic regional picture may be a strong step toward tackling the larger societal ills. "In order to fix the issues of the region," said Thompson, "we first have to recognize we have a diverse bunch of people living there."

An earlier version of this story did not sufficiently attribute some of the facts and ideas it includes. In several places, we've added attribution and links to original sources to make the provenance of this information clearer. Also, a previous version of this post misidentified the Appalachian State University professor who petitioned the Library of Congress. He is Fred Hay, not Frank Hays.