Accessibility links
Chuck Stone, Pioneering Black Journalist And Professor, Dies At 89 : Code Switch More than 70 men turned themselves over to Chuck Stone during his time as a columnist. The suspects trusted the Philadelphia Daily News journalist but feared police brutality. 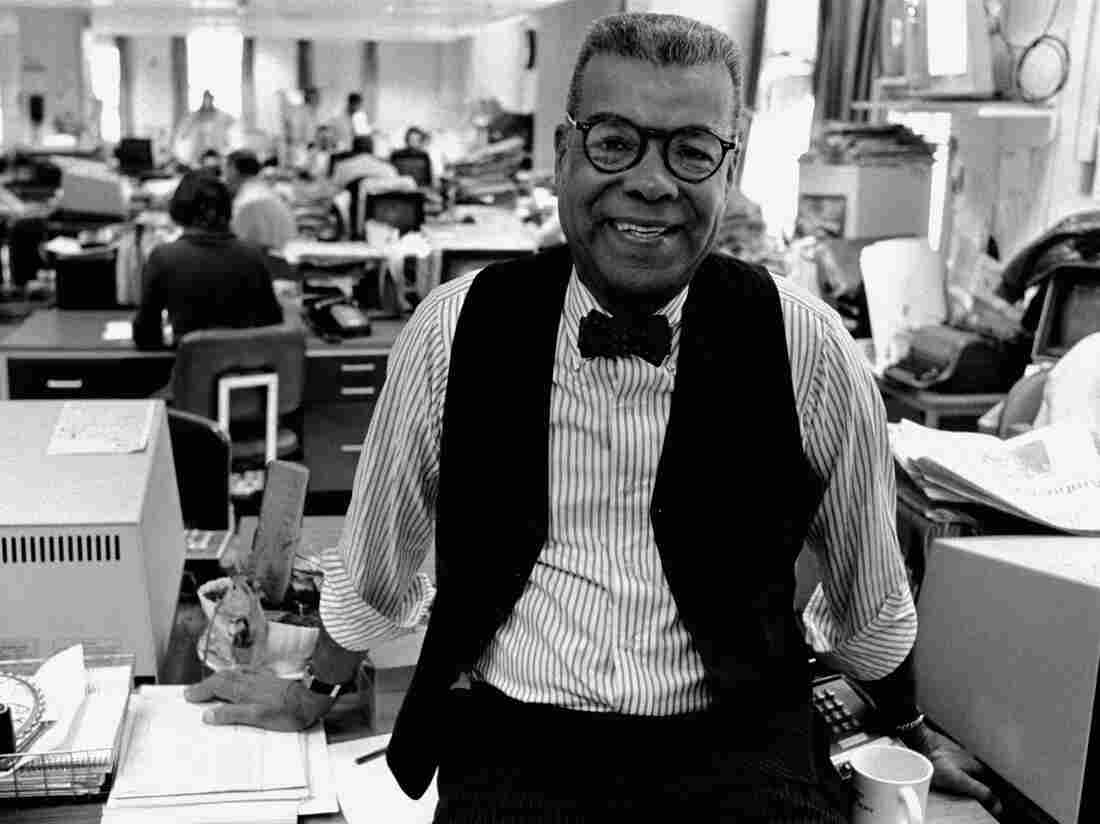 Chuck Stone poses in the newsroom of the Philadelphia Daily News on Feb. 15, 1984. AP hide caption 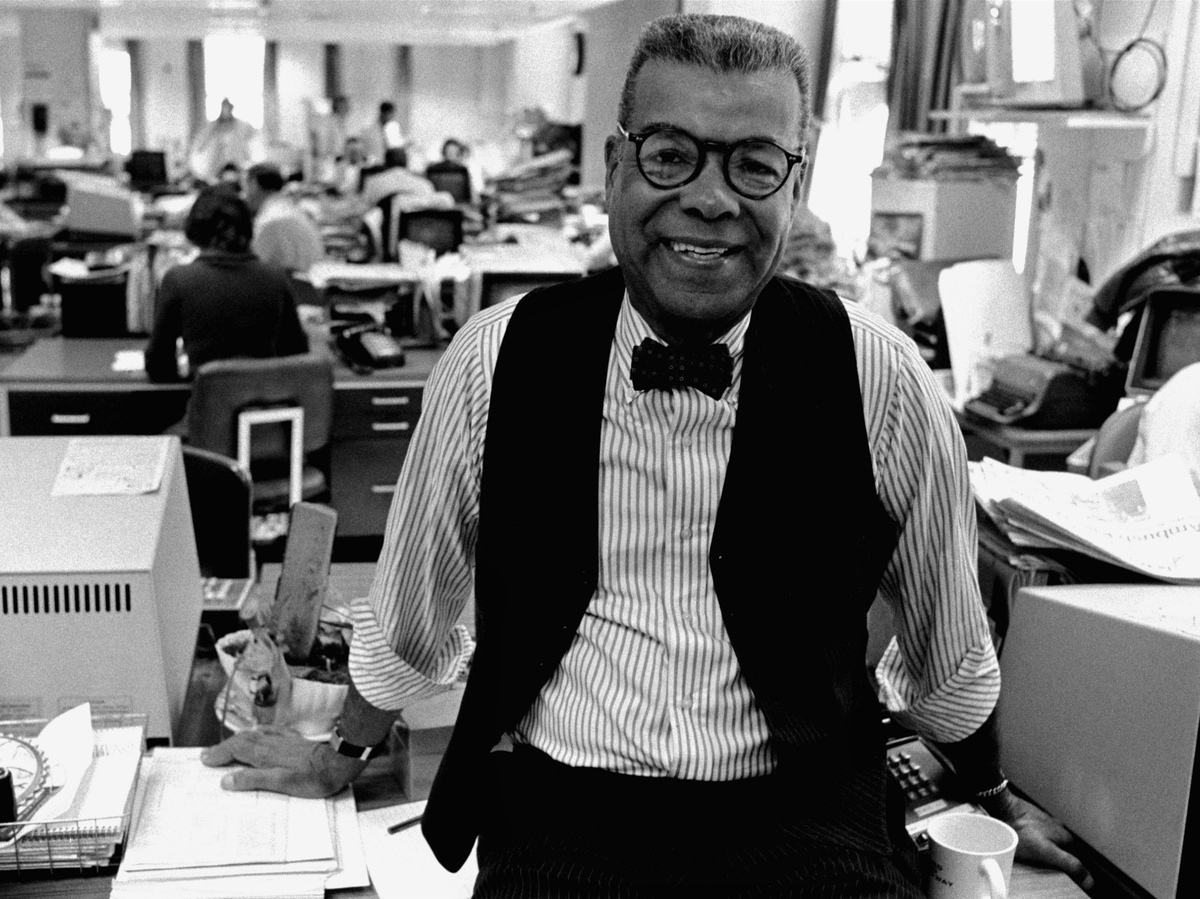 Chuck Stone poses in the newsroom of the Philadelphia Daily News on Feb. 15, 1984.

When Chuck Stone worked at the Philadelphia Daily News, staffers for the newspaper got used to calls from reception telling them a person the police were pursuing as violent and criminal was waiting to talk to Stone. The suspects trusted Stone but feared police brutality. The veteran newsman would talk to the accused, take the accused's photo to show he was intact and then call the police.

Elmer Smith, who inherited Stone's column after he retired, wrote that this was a prudent, even lifesaving measure: "If their features somehow got rearranged on the way to prison," Smith wrote in his appreciation on Monday, "a Daily News photo would be evidence of what had happened to them."

A total of 75 people would turn themselves over to Stone in the 19 years that he wrote one of Philadelphia's most closely read columns. All were black, and all feared being battered or even killed by Philadelphia's finest, which had a reputation for institutional brutality in the city's communities of color. Especially its black ones.

Stone's reputation for fighting racism and police brutality had such cred that when a group of heavily armed inmates attempted to escape from Philadelphia's notorious Graterford prison in 1981, they told police negotiators they wanted one thing: Chuck Stone. After two days, he negotiated their surrender, and the six hostages the prisoners had taken emerged alive and unharmed.

Believing In America — And Challenging It

Charles Sumner Stone Jr. was born in St. Louis in 1924 and raised in Hartford, Conn. After serving in the Army as a flight navigator (he was a Tuskegee Airman), Stone turned down a Harvard University acceptance letter to go to nearby Wesleyan University, where he graduated with honors in English. He earned a master's degree at the University of Chicago, then worked in India and Egypt for CARE, a nonprofit aid organization.

When he returned to the States, a journalist friend tried to persuade Stone to come work for his newspaper. Despite promising his mother that he would not work for the black press — "she believed in integration and the mainstream in all things," he remembered — he promptly did exactly that, first for the New York Age. Then the Washington Afro-American, where he covered the White House. And finally as editor-in-chief of the Chicago Daily Defender (it's now just the Chicago Defender and runs weekly), where he was ultimately canned for writing articles that made the city's then-mayor, Richard Daley, angry.

Next, instead of writing about politics and ticking off politicians, he went to work for one. Stone became a special assistant to the flamboyant, outrageous and unapologetic Harlem Rep. Adam Clayton Powell Jr., at a time when race was America's dangerously bubbling caldron. Along the way, he became friends with Malcolm X, Martin Luther King Jr. and Stokely Carmichael. When Powell lost his seat to Charles Rangel in 1970, Stone wrote books and consulted.

It's probably not much of an exaggeration to say that when Stone arrived in the newsroom of the Philadelphia Daily News in 1972, the only other black things there were the desk phones. He was definitely one of the first black newsmen to work in the mainstream press, and it didn't faze him one bit. You couldn't miss him in the newsroom or out in the world: In an era where it felt like everyone was wearing big hair, jeans and clogs, Stone was in his signature blue blazer, hand-knotted silk bow tie and tortoise-shell glasses. He might have been the only prominent black man outside the military to wear a crew cut — a marked contrast to the Afros that were blossoming elsewhere in the country.

From the first, he pushed newsroom managers to make their workplaces look more like America. He co-founded the National Association of Black Journalists as an affinity group that supported the goals and aspirations of black journalists while pressing to increase their numbers nationwide.

Richard Prince, a columnist at the Maynard Institute for Journalism Education, says Stone was pleasantly surprised at how NABJ grew and thrived. "He really didn't expect NABJ to be more than about 300 members," Prince recalls. But the organization now has more than 10 times that number — and has been the inspiration for several similar affinity groups serving journalists who are Asian-American, Hispanic, Native American and LGBT.

More black journalists, as far as Stone was concerned, was a good thing — but, says Prince, he insisted that "excellent black journalist" not be considered an oxymoron. "He was a man for all journalists, and the principles he espoused — he called them FEAT: fairness, excellence, accuracy and thoroughness — are universal."

Stone retired from the News in 1991 and moved south to teach journalism at the University of North Carolina, Chapel Hill. He was hugely popular and much honored during his time there. He retired in 2005, and soon after, the university created the Chuck Stone Program for Diversity in Education and Media to say "thank you."

Each summer, the program takes a dozen of the brightest high school seniors from around the country, brings them to Chapel Hill and gives them an intensive course in several aspects of journalism. Many have described it as life-changing, and several of the program fellows studied journalism when they went on to college. It's a fitting tribute, combining Stone's love of journalism, joy in teaching and passion for diversity.

If you go to the program website, you'll see that it's turning out exactly like Stone insisted on throughout his long career: a profession that looks like the country it serves, with reporters striving for excellence.

Stone's friends, colleagues and former students are united in mourning this passing of what might eventually be known as the "Stone Age" in contemporary journalism. Politicians who had a track record of corruption and discrimination, or both? Not so much. As Maria Gallagher, a former Daily News writer, explained in Stone's News obituary: "If he liked you, he loved you. If he didn't like you, he'd write about you."

Reason enough to stay on his good side. RIP.