Accessibility links
How Stereotypes Explain Everything And Nothing At All : Code Switch The early days of college hoops were dominated by flashy players who were thought to be naturally suited for the game and who saw the sport as their way out of the ghetto. They're not who you suspect.

How Stereotypes Explain Everything And Nothing At All

How Stereotypes Explain Everything And Nothing At All

Why Aren't Asian-Americans Getting Their 'One Shining Moment'?

A few days ago, I wrote a post in which I was mulling just why so few Asian-Americans played Division I basketball. The numbers were striking: of the 5,380 men's players in the top tier of college basketball during the 2012-2013 season, only 15 were Asian-American. Asian-American ballers weren't just underrepresented. They were practically invisible.

While asking that question, I posited a number of easy explanations for why this might be so, before laying out why none of those explanations was sufficient.

But a few people defaulted back to them, anyway. Asian-Americans are too short. They're just too busy studying and excelling at school to be concerned with basketball.

"How many sons of Jewish immigrants are playing basketball?" one annoyed commenter asked, presumably because Jews are another group often held up as overachieving models of assimilation.

I want to answer that question by telling a funny story that reveals a lot about stereotypes — and how once they become fixed and widely accepted, it becomes difficult not to use them as explanations for everything.

So let's rewind a bit.

Way back in the early part of the 20th century, entrance to the Ivy League colleges rested almost entirely on one's performance on an entrance exam. Leaders at the big Ivy League universities were had a growing concern that people they considered undesirables were crushing those entrance exams — and becoming an ever-larger presence among their student populations.

According to Jerome Karabel, the author of The Chosen, Harvard's then-president Lawrence Lowell knew that a straight-ahead quota wouldn't be popular among his faculty. So he came up with a workaround by instituting a whole new admissions procedure for potential students — a process that will sound familiar to anyone who has applied to college since:

Lowell agreed to limit the size of the entering class and to institute recommendation letters and personal interviews. Yale and Princeton followed suit; and soon came the whole panoply familiar to this day: lengthy applications, personal essays, descriptions of extracurricular activities. This cumbersome and expensive process served two central functions. It allowed the universities to select for an attribute the disfavored class was thought to lack — i.e., "character" — and it shrouded the admissions process in impenetrable layers of subjectivity and opacity, thus rendering it effectively impervious to criticism.

"Character" was vague and squishy enough that it could mean just about anything those administrators wanted it to mean. And what they wanted it to mean was Not Jewish. The leaders at the Big Three were aghast at the numbers at New York's Columbia University, which by 1920 was almost 40-percent Jewish. After they instituted Lowell's idea, though, the number of Jewish students in the next incoming classes at those schools fell dramatically. Their plan to fix "the Jewish problem" had worked.

But there was one unforeseen wrinkle: the new admissions policies kneecapped the Ivies' ability to recruit and retain top basketball talent. One star Jewish player, Sam Pite, left the Yale team because he felt he had been mistreated by his bigoted coach. After the Yale Bulldogs finished dead last in the Ivy League after the 1922 season — and, incidentally, were trounced by an amateur Jewish club team — some angry alumni demanded that the University stop discriminating against Jewish applicants to their schools. They did. Pite eventually came back after a coaching change, and the Bulldogs won the conference title the next season. 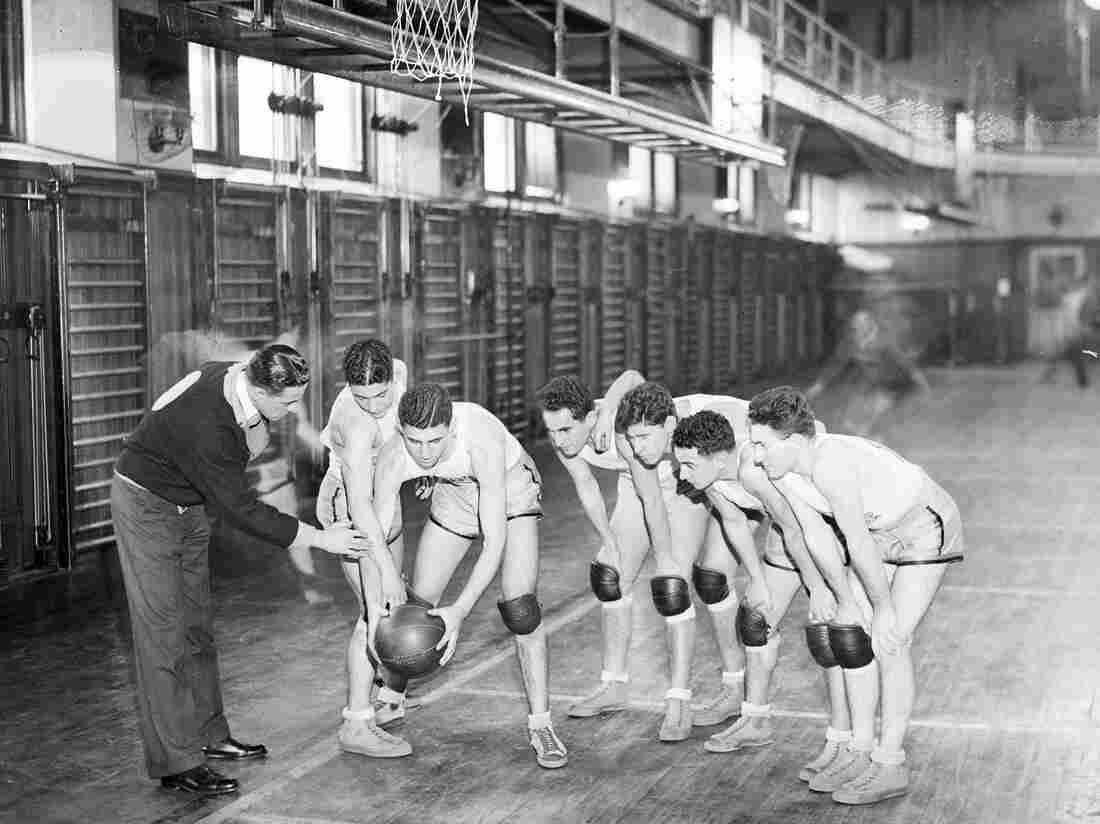 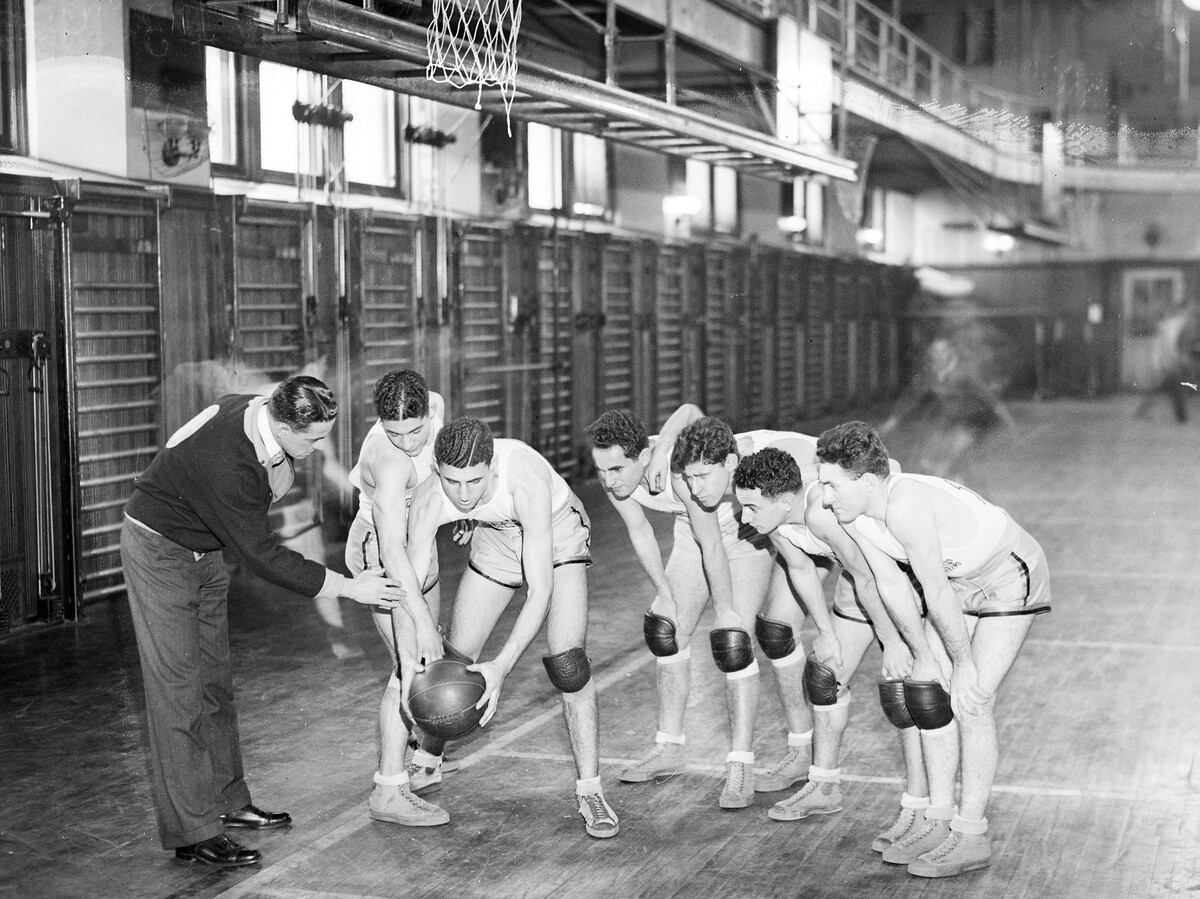 The City College of New York basketball team in 1932.

That's right. In the decades before World War II, basketball was dominated by Jews. (Or, if you prefer, the sons of Jewish immigrants.) The first bucket in NBA history was scored by a Jewish player named Ossie Schectman. There were amateur leagues in Jewish communities all over, and especially in big cities like New York and Philadelphia, where many young Jewish boys saw hoops as their way out of poverty.

Jon Entine, writing in Philadelphia Magazine, laid out the backdrop:

The European Jews who flooded off immigrant ships into the ghettos of new York, Philadelphia and Baltimore at the turn of the century were considered by some WASP Americans to be morally inferior, a stereotype that has long attached to blacks. Both ethnic groups became prominent in hoops, and for many of the same reasons.

"Basketball is a city game," notes Sonny Hill, a local icon who has run a high-school summer league for more than 35 years. "If you trace basketball back to the 1920s, '30s, and '40s, that's when the Jewish people were very dominant in the inner city. And they dominated basketball."

Not even New York could challenge the City of Brotherly Love in basketball talent. From 1918 onward, the South Philadelphia Hebrew Association team, or SPHAs (pronounced "Spas"), barnstormed across the East and Midwest, playing in a variety of semipro leagues that were precursors to the NBA. [...]

"Every Jewish boy was playing basketball," said the late Harry Litwack, who starred for the SPHAs in the 1930s before going on to coach Temple for 21 years. "Every phone pole had a peach basket on it. And every one of those Jewish kids dreamed of playing for the SPHAs."

"It was absolutely a way out of the ghetto," added Dave Dabrow, also deceased, a guard with the original SPHAs. "It was where the young Jewish boy would never have been able to go to college if it wasn't for the amount of basketball playing and for the scholarship." Sound familiar?

Entine writes that the main reasons Jews dominated hoops were sociological — owing to the makeup of inner-cities and the lack of economic opportunities therein. But that didn't stop observers like Paul Gallico of the New York Daily News from positing some other more, uh, colorful theories about why that might be.

People tend to think that stereotypes are honest reflections of what they see in the world. But instead, they often shape how we see the world.

"[Basketball] appeals to the Hebrew with his Oriental background," he wrote, according to Arieh Sclar, the author of A Sport At Which Jews Excel. Gallico added that it sat well with the "temperament of the Jews" because it "places a premium on an alert, scheming mind, flashy trickiness, artful dodging, and general smart alecness."

To Gallico, the existing widely-held (and cartoonishly anti-Semitic) stereotypes about Jews also conveniently explained why the sport was dominated by them. And it wasn't just Gallico. Coaches back then also tended to view Jewish players — who were perceived as shorter — as better suited for the game, because the game's rules at that time actually disadvantaged taller players. After changes in the rules and changes in the ways Jewish communities were organized, basketball's demographics rapidly began to shift.

People tend to think that stereotypes are honest reflections of what they see in the world. But instead, they often shape how we see the world and how we metabolize the data in front of us. It's confirmation bias: if people see a lot of Jews playing and dominating basketball, and the common stereotype is that Jews are crafty schemers, in the popular imagination, the sport becomes about crafty scheming. And if someone were writing back then about why so few blacks were among the game's biggest names, they'd probably fall back on hoary stereotypes about black players lacking the necessary intelligence or craftiness or work ethic.

It says something that when people explain why there are so few Asian-Americans in college basketball today, they summon the very tropes that once were used to explain why there were so many Jewish players. Jews are so crafty and short; of course they'd succeed at basketball! Asians are so intelligent and short; why would they be playing basketball?

It's why a question like that — "Why are there so few Asian-Americans in Division I basketball?" — is worth asking. It's the type of question that exposes where our stereotypes have disguised themselves as explanations, and lets us search for the real explanations, in all their complexity.