Accessibility links
Kima Jones, On Black Bodies And Being A Black Woman Who Writes : Code Switch In her poetry, Kima Jones explores racial and sexual identity in the modern world — and the future. Nostalgic and assertive, her work revolves around a recurrent protagonist: the person of color.

Kima Jones, On Black Bodies And Being A Black Woman Who Writes

Kima Jones, On Black Bodies And Being A Black Woman Who Writes 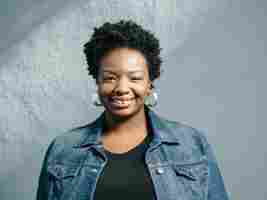 April is National Poetry Month — and at Code Switch, we like poems. We will be exploring a set of broad issues of race and ethnicity in modern poetry for the duration of the month.

Kima Jones, an emerging poet, has developed a strong presence in the literary world — and on social media. And to kick things off, she'll be guiding us through an audience-based Twitter poetry session this Wednesday. You can join us at 12 p.m. EST, and pitch in your own lines for our poem by tweeting at @NPRCodeSwitch and @Kima_Jones with the hashtag #CSPoetry.

When we first came up with the idea, one of the main goals of our poetry month project was to specifically seek out new poets of color. We wanted to share fresh voices that don't get heard as often: young poets who were livening up the literary landscape. That's when we found Kima Jones.

Jones is a 2013 PEN USA Emerging Voices Fellow and a 2012 Lambda Literary Fellow in poetry. In her work, she explores themes of racial and sexual identity in the modern world and the future (she describes herself as an Afrofuturist). Born and raised in Harlem, Jones believes her identity as a queer black woman is central to her poems — and the idea of isolating race from art is, well, not her favorite.

Jones' poetry often invokes a sense of intimate nostalgia — a warm thirst for a moment or a place that was, or that could have been. The verses change pace on a dime. They vibrate. Her work features a gamut of different contexts and settings — however, across many of her poems, one image recurs often: black bodies.

On encountering poetry for the first time

I got into writing when my fourth-grade teacher introduced the Harlem Renaissance week project to the class, and she brought in some writers to talk to us more about the Harlem Renaissance. We started studying Langston Hughes. At that time, Walter Dean Myers also did a visit to our class, and we read his book Scorpions. ... And there was a poetry competition happening.

And I remember he signed my book, you know, "To Kima, a fellow writer and poet," and it kind of just shaped my thinking about my identity and who I was.

It's an aesthetic, grown out of the idea, very simply, that there will be black people and people of color in the future. I mean, that's the very simple way to put it ... Afrofuturism is a way of writing ourselves into the world and into the future and being committed to a future that's also free of racism, and sexism, and capitalism and these things that have enslaved minority peoples. ...

It's imperative that we create the art that we want to see in the world, and that we write the future that we want. I mean, being realistic, right? Because you know certain things won't happen — but the first point of writing the future that I want is putting people of color in the damn future.

When we look at media, and we look the way black bodies are used — there has to be a different presentation in my art, and there has to be a different lens with which to look at them. And again, to humanize black people, because if we just look to TV or newspapers — or if we just take, for example, Hurricane Katrina, and the way they laid those children out in the street and just photographed them, it was horrible. It was deplorable to just see small black bodies laid out like that. You could liken it to a garbage bag. You can say, "God, have I ever seen a photograph of white children — even after something as devastating as a hurricane — laid out in the street and just photographed like that, no respect for the dead?" And you wouldn't have. ...

we tested our faith
in stories of birds
and bees

— excerpt from "Fresh" by Kima Jones

So I think in writing the black body is my way of trying to humanize what happens to the black body everywhere else and in other pieces of literature.

On the poem "Fresh"

I felt like one of two things was happening — first, that your grandmothers, and your aunts, your mom teaches you all these lessons about your body — and so that's where you get the birds and the bees. And the birds and the bees, they tell you that if you do this thing, this act, that this thing would happen. And we're warned against that. And so my rebuttal in the poem is: "But the bees lie, but the bees. ... " My grandmothers said this would happen, but someone lied, because this is not happening. ...

And then the second part: I was very close to my grandmother, and my feeling is that all of the wisdom that she's given me, all the life lessons, everything that I've learned from her — who will I give this to?... It was about me wanting to do something with the beautiful person that my grandmother was and with all that she's taught me.