Accessibility links
Poetic Take On Black Boxer Lands Punches With Broad Appeal : Code Switch Boxing has long laid bare American tensions around race. Artists like Adrian Matejka, whose latest book of poetry is based on the life of Jack Johnson, take the conversation outside the ring. 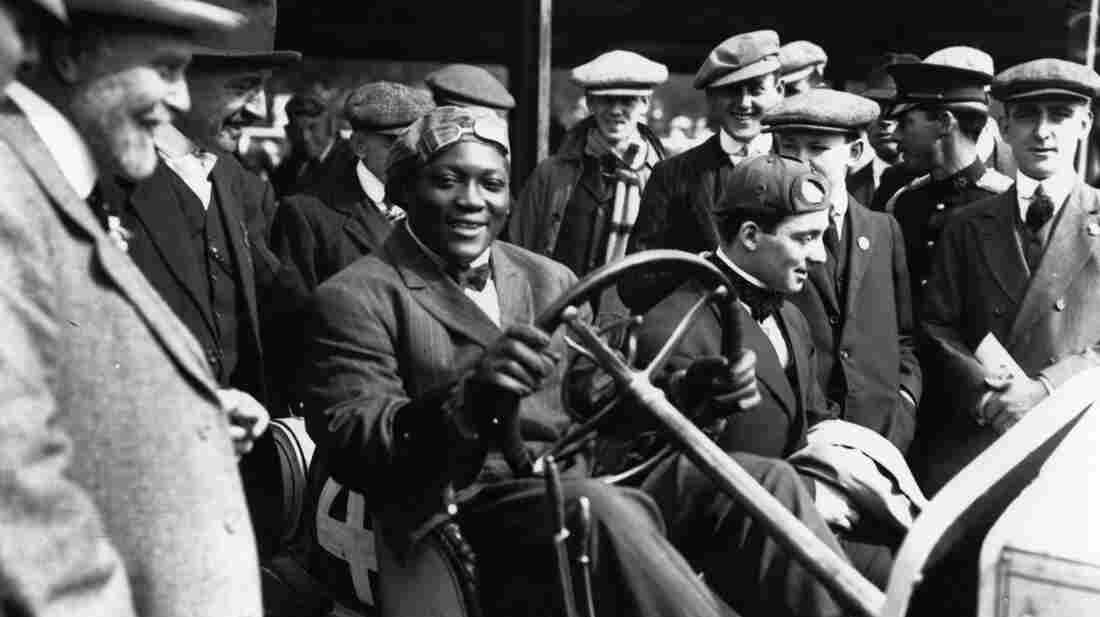 Jack Johnson, the world's first black heavyweight boxing champion, was an international superstar in the early 1900s. His prowess in the ring brought him huge amounts of cash, which he spent on fast cars, fine clothes and women. Topical Press Agency/Getty Images hide caption 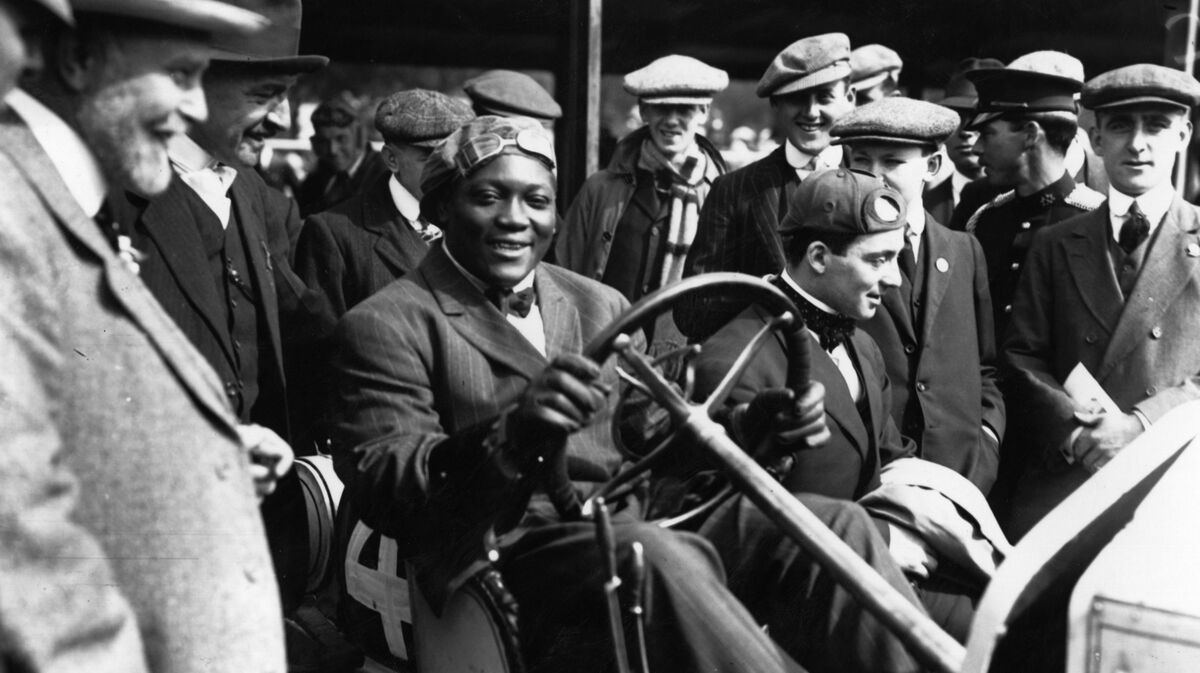 Jack Johnson, the world's first black heavyweight boxing champion, was an international superstar in the early 1900s. His prowess in the ring brought him huge amounts of cash, which he spent on fast cars, fine clothes and women.

April is National Poetry Month, and Code Switch is celebrating by writing about great poets of color and their poems that address issues of race, culture and ethnicity. We began the series with an invitation to our readers to help us build a collaborative poem. Today, we take a look at the intersection of boxing, race and verse. Enjoy, and share your favorite poetry recommendations in the comments.

Americans don't love boxing like they used to. For decades, fans have bemoaned that audiences are down and networks aren't interested; now, MMA competes for eyeballs on pay-per-view.

NPR On Boxing-Inspired Art And Literature

'One Night In Miami', More Than Clay Beats Liston

'One Night In Miami', More Than Clay Beats Liston

But writers and artists adore the sport. Consider some of the premieres from the past year alone. A dance homage to Muhammad Ali. Not one, but two boxing operas: Approaching Ali and Champion, based on the life of Emile Griffith. Two plays putting Muhammad Ali on the stage. Mike Tyson's memoir, which was — of course — reviewed by Joyce Carol Oates, and his one-man show, directed by Spike Lee, which traveled across the country and spent some time on Broadway.

You don't need to know a hook from a cross to appreciate this bounty. The stories behind boxing have universal appeal — there's a reason poets have been inspired by pugilists for all of recorded history. And boxing is a revealing microcosm of American anxieties. Come for the violent, beautiful stories; stay for the commentary on culture and race.

Take Adrian Matejka's poetry collection The Big Smoke — another entry on the list of new, artsy takes on boxing. The collection, based on the life of Jack Johnson, was nominated for a National Book Award and recently won the Anisfield-Wolf Book Award. All the fighters above are great black boxers who fought in a racially charged environment and shadowboxed with oppression throughout their careers. And they all owe a legacy to Matejka's muse, Jack Johnson, the first black heavyweight champion of the world.

Johnson — if you're not up on your boxing facts or your knowledge of the world's great badasses — held the heavyweight title from 1908-1915, when boxing was an enormously popular sport. Johnson, the son of former slaves living at the height (or rather, the nadir) of Jim Crow, first fought in battles royal — where groups of black men fought for white entertainment. He moved into the pros, beating the top black boxers and then destroying the white competition.

in champagne, dry
ourselves with hundred-
dollar bills like those

— from "Courtship" by Adrian Matejka

Instead of trying to pander to those who despised him, Johnson flipped the world a middle finger. Matejka, who spent years researching Johnson's life before writing poems in his voice, says Johnson kept his head shaved and sported gold teeth to augment white America's fear of him. He dated and married white women, and flaunted his money. In one of Matejka's poems, Johnson courts a girlfriend by saying "We can bathe // in champagne, dry / ourselves with hundred- / dollar bills like those // Rockefellers do." 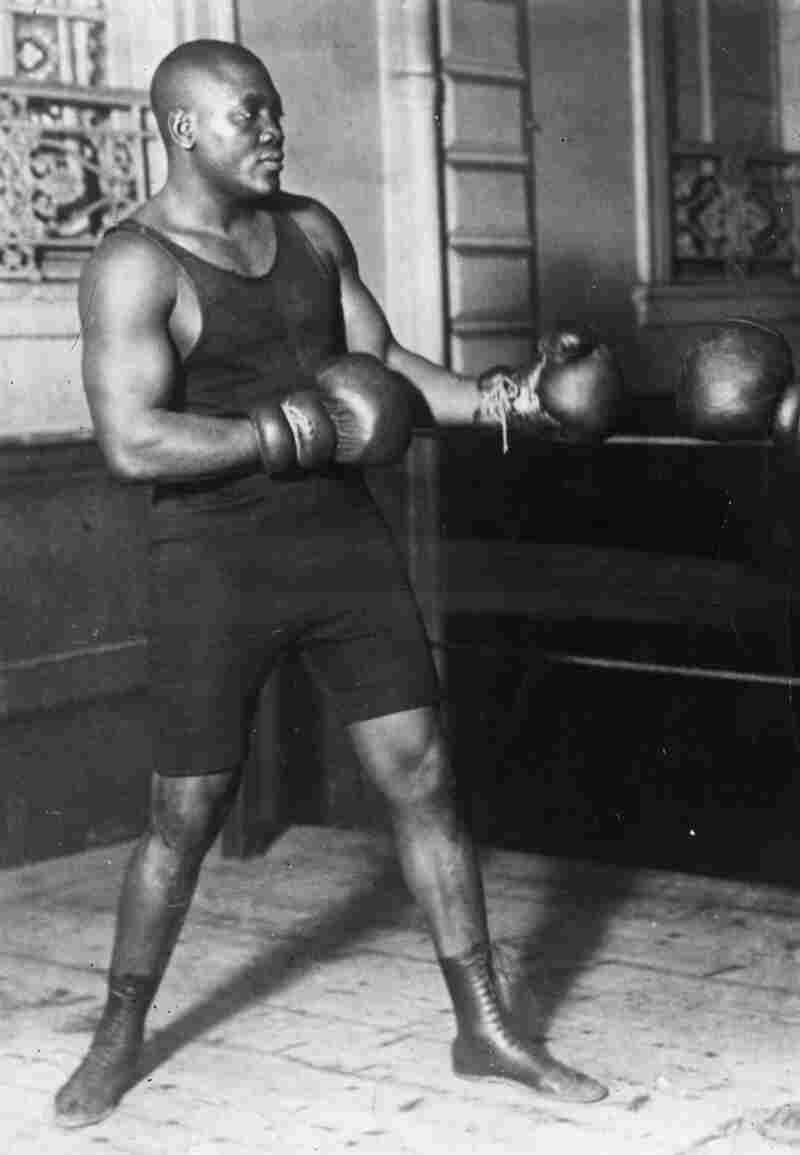 In the ring, Johnson was a master of defense, with a powerful knockout punch and an unprecedented talent for talking trash. Topical Press Agency/Getty Images hide caption 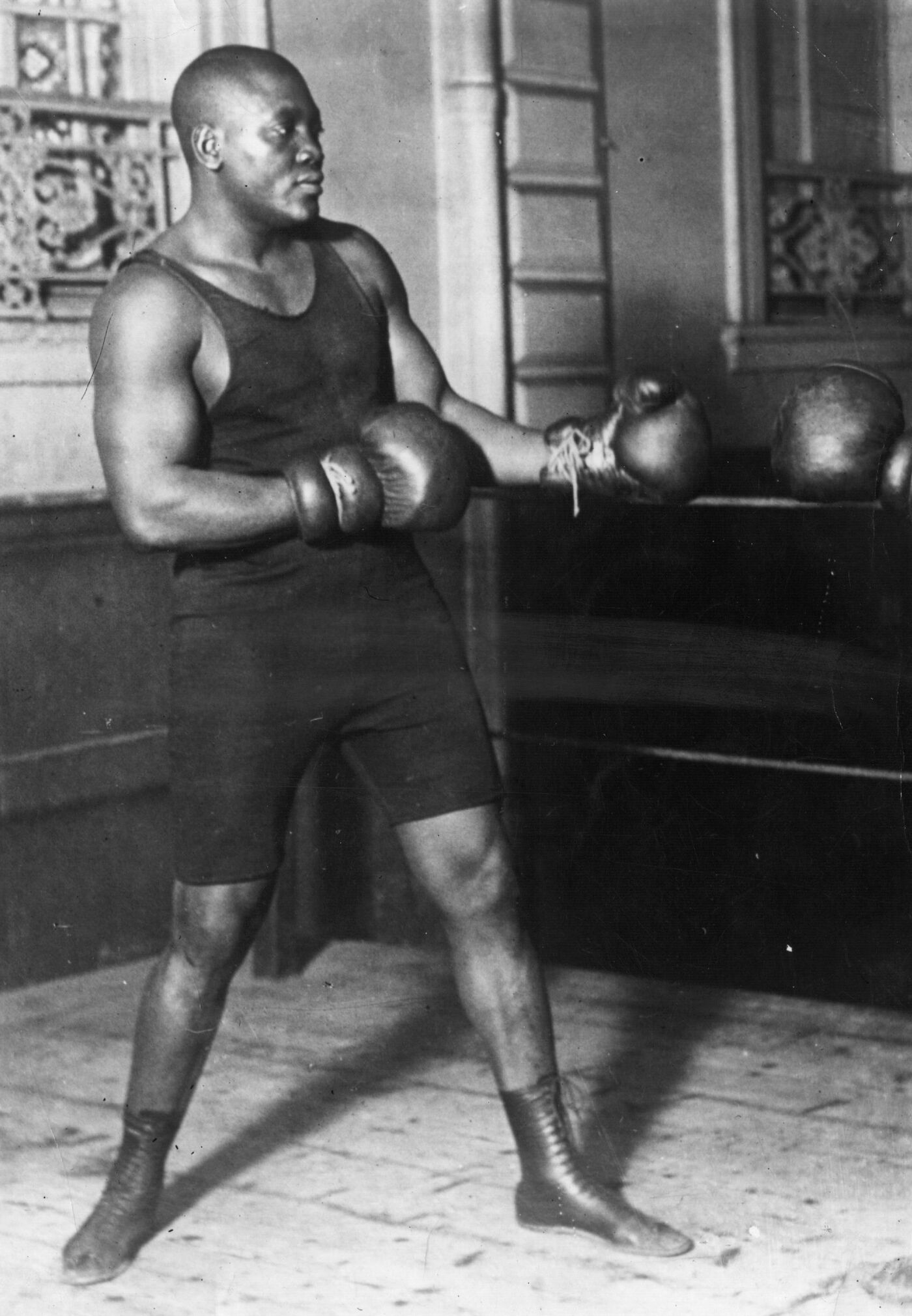 In the ring, Johnson was a master of defense, with a powerful knockout punch and an unprecedented talent for talking trash.

But there were limits to how much Johnson could push back. He'd dropped out of school when he was young, and he made up for it once his career took off. He read Shakespeare; he loved opera; he played classical viol. But while some newspapers noted his learnedness, others would state as fact that he was "illiterate." In Big Smoke, Matejka puts it like this:

You can change clothes
five times a day while
speaking Italian & playing
the viol in that fancy
classical way, but you
can't change your skin.

America started calling for a "great white hope," a white man who could beat Johnson and restore a lost sense of racial order. After several white boxers failed, former champion James Jeffries agreed to come out of retirement and battle Johnson in 1910's "Fight of the Century." The men fought for 15 rounds, but Johnson's advantage was established early; he was laughing and taunting Jeffries and spectators. The "great white hope" started to stumble.

One Hundred Years After The 'Fight Of The Century'

One Hundred Years After The 'Fight Of The Century'

Matejka put the trash talk into verse: "How do you like 'em // Jim? Left hook instead / of a question mark. Did that // hurt?" Jeffries had never, in all his career, been knocked down in a fight. Johnson sent him to the canvas three times. Black Americans partied in the streets; white Americans rioted, attacking the celebrants. The victory was definitive.

Two years later, Johnson was arrested under the Mann Act, ostensibly for prostitution but transparently for having sex with a white woman. (Johnson was notorious for beating his wives and lovers, but he never would be arrested for that. Just for crossing the color line.) An all-white jury convicted him of transporting a woman across state lines for "immoral purposes."

Johnson fled to Europe, but his attempts to continue his career there were interrupted by World War I. In 1915, he lost his title during a match in Cuba; eventually, he returned to the U.S. and served several months in prison for his Mann Act conviction.

'A Netherworld Of Visceral, Violent Experience'

Today, battles royal are a dirty bit of history. Consorting with white women won't land any black superstar in jail. And America no longer demands a "great white hope" — at least, not out loud, though Hamilton Nolan argues quite convincingly (NSFW language) that the desire is barely suppressed.

Boxers perform a version of themselves that embodies some of America's most poisonous stereotypes about black men — violent, aggressive, uncontrolled. They pay a steep physical price, but reap financial rewards. It comes down to a transaction whose terms were neatly defined by Ali: "Suffer now, and live your life as a champion."

'Money' And 'Canelo' Punch It Out For Black And Latino Fans

Joyce Carol Oates writes that "the boxer has journeyed to a netherworld of visceral, violent experience that most of us, observing from a distance, can have but the vaguest glimmer of comprehending." She's referring to knocking a man into unconsciousness. But boxers experience American racial politics more viscerally and more violently than most, too.

Last year, Gautham Nagesh noted that boxing writers often treat fighters as disposable entertainers. But at its best, art does the opposite, highlighting the choices and compromises of each individual — both the suffering and the victory. Great art and poetry about boxing invites everyone — even the squeamish — to consider the forces of race, money and power that influence the show. Because prizefighting, Matejka writes, is always a performance:

The better man
almost always wins, but we all play our part
in the spectacle.