Accessibility links
From Foreign Garb To Fashion Fad, Pajamas Have Traveled Far : Code Switch The Persian and Indian garment was brought home by British colonials and made stylish for women by French designers. At first, PJs were seen as a cultural challenge to the American use of nightshirts.

From Foreign Garb To Fashion Fad, Pajamas Have Traveled Far

From Foreign Garb To Fashion Fad, Pajamas Have Traveled Far

A few months ago, Organizing for Action (a nonprofit created to support President Obama's policy goals) introduced America to a cozy-looking young man with a message about the Affordable Care Act:

Alas, poor Pajama Boy! His plaid onesie was no protection from the barbs of social media. He was derided as unmanly and immature, a sure-fire sign of the decline of American masculinity. "He is probably reading The Bell Jar and looking forward to a hearty Christmas meal of stuffed tofurkey," sneered Rick Lowry.

Pajamas have been challenging American sartorial sensibilities for a century in the softest, warmest, most cozy way possible — Pajama Boy was just the latest victim. Are they nightwear or daywear? Menswear or women's? A threatening foreign invention, or all-American garb?

Before pajamas, most European and American men wore nightshirts to bed, as they had for centuries: long, loose, pantless. Women wore nightgowns. And that was that.

In the 19th century, British colonials encountered the "piejamah," a common garment in India and Iran. It's a transliteration of a word shared by Urdu, Hindi and Persian that means "leg garment." 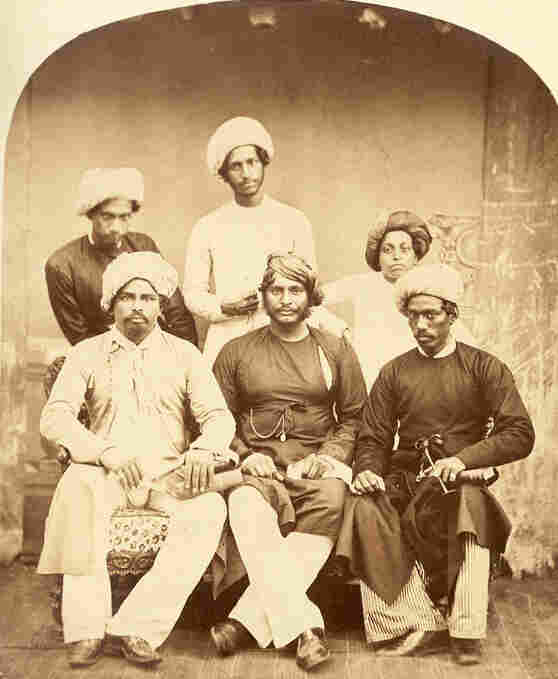 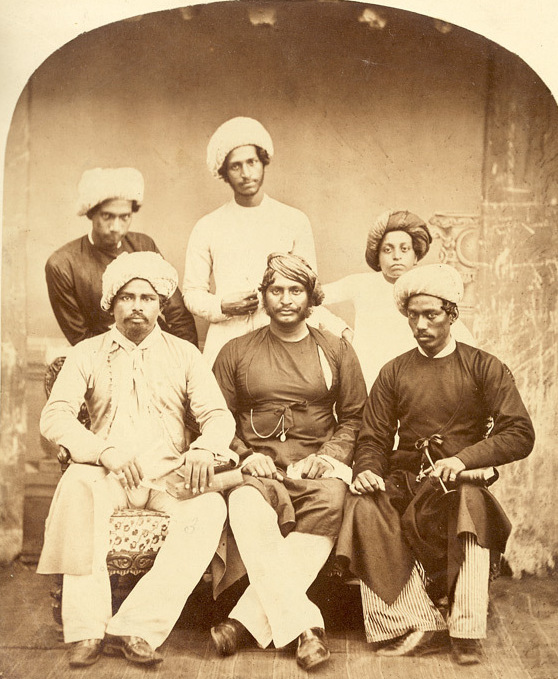 This photo from 1867 shows five Muslim men and a boy wearing different styles of pajamas in Bombay.

The loose set of trousers, tied at the waist, was comfortable in hot weather and worn as daywear by both men and women. (It's still worn in South Asia today, with kurta and kurti tops.)

The traveling Brits soon adopted the cozy pants: By 1854, visitors to British India were advised that most Europeans wore "pajamas" for afternoon naps. And as that guidebook tip shows, colonials made two changes — one linguistic and one cultural. First, they added an "s" to the word, so it would match its English equivalents: drawers, trousers, pants.

Second, they wore their pajamas — with a loose top — to bed. Persian daywear became colonial nightwear, and by the late 19th century, pyjamas (the British spelling) had become mainstream in the U.K.

Americans were slower to catch on. Pajamas, one newspaper wrote a half-century later, "were viewed at first by our hardy folk with the same deep suspicion they showed for the first bathtubs."

By the late '20s, American men had come around — 90 percent wore trousered pajamas to bed instead of nightshirts. (Although, it must be noted, the same article says some upper New Englanders considered them unmanly — a sentiment Pajama Boy's opponents seem to share.)

'The Most Cosmopolitan Garb'

As PJs were catching on as nightwear for men, they slowly became fashionable daywear for women. In the 'teens, French designers Paul Poiret and the Callot sisters were trying to persuade fashionable young women to wear "Turkish trousers" instead of petticoats. But even with Ballet Russes popularizing Persian-influenced style, their strongly Orientalist fashions were a bit ahead of their time.

It wasn't until the 1920s that loose pajama pants for women became "unquestioned" as loungewear at home. And then "pajamas" — in a form we'd more readily recognize as a jumpsuit — hit the streets. One designer, according to a Milwaukee paper, had designed some "Very Important" pajamas, in "Extremely Russian Combinations Of Color," that were meant for dinner parties. Parisian designers developed pajamas for the beach that slightly scandalized American observers — until a few years later, of course, when they were de rigueur.

That fad was short-lived; after the '30s, pajamas returned to the bedroom (for both genders, this time). By the '40s and '50s, the clothes we call "pajamas" had morphed into a wholesome, slightly childish symbol — as all-American as a Norman Rockwell painting.

But less than 100 years ago, the very word "pajama" was loaded with exotic connotations. For some, it was objectionable: A pro-nightshirt campaigner in 1931 argued that "the pajama is a foreign importation that is helping to bring about the decadence of good old American institutions."

For others, it was part of the allure. A 1930 columnist, apparently ignorant of the Persian and Indian origins, attributed the garment to other Eastern cultures — approvingly. Pajamas are "the most cosmopolitan garb," Allene Sumner wrote, "combining the best that the east and the west has to offer — a veritable league of nations. The trouser costume of China may have been the basis, just as the kimono of Japan is suggested in the long coats, but there is a suggestion of Paris in the cut of the well fitted, snappy blouses, and the low-cut backs, and the influence of the American [sailor] is easily discernable."

And with this mélange of cultural influences, Sumner saw liberation: "Along came the pajama, and said: Dress up as if you thought life were fun. Be gay. Be fantastic, and be fearless. Look like a Christmas tree or an Italian sunset if you like. It's all in a lifetime."