Accessibility links
A Legume With Many Names: The Story Of 'Goober' : Code Switch Today, everyone calls it a peanut. Southerners might also say 'goober.' But before the Civil War, there were a dozen names for that humble legume, and it wasn't at all clear which one would win out.

It lacks the stirring power of the Battle Cry of Freedom. It's not as enduring as When Johnny Comes Marching Home. As far as Civil War songs go, it certainly ain't no John Brown's Body. But Johnny Cash could make anything sound good:

Gouber pea. Ground nut. Ground pea. Earth-nut. Pindar nut. Ground bean. The peanut had a legion of names before the war; today, only "goober" reminds us of that tasty, unpretentious legume's long travels.

(Before we go any further, let's be clear: the peanut is not a nut. It's related to beans and peas, and marked by the distinct oddity that after fertilization it pushes itself underground to mature. If we were going to give Arachis hypogaea an English-sounding name, "ground pea" makes perfect sense – and, as Johnny Cash notes, for some older Southerners that was the name. Alas, accuracy lost that linguistic battle. But just for the record: A peanut is a legume.)

Peanuts were brought to America by way of the Atlantic slave trade. Remember the triangular trade patterns you might have learned about in high school? Finished goods to Africa, slaves to the Americas, raw materials to Europe, repeat.

Reality, of course, was a little more complicated. As ships criss-crossed the Atlantic, many New World items were sold to Africans — including the peanut.

The plant was native to central South America, and spread throughout that continent in the precolonial era. It made it as far north as the Aztec empire, where it was known as the ground cocoa bean, or tlālcacahuatl. (One Spanish word for peanut: cacahuate.) And it thrived in Brazil, where it was called manobi or mandubi and was readily adopted by Portuguese settlers. (Portuguese for peanut: amendoim).

Spanish galleons and Portuguese traders brought this sturdy crop back across the Atlantic, but it didn't really catch on in Europe (Europeans still aren't really peanut fans, to American farmers' chagrin.) British colonies in America also didn't appreciate the plant; Andrew Smith notes in Peanut that early colonial references to "ground-nuts" were to an unrelated tuber. 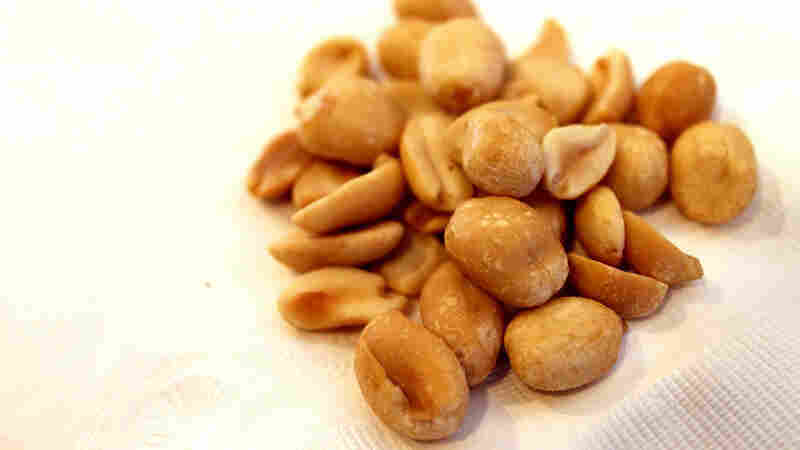 Crunchy, salty, delicious goobers. Sure, you could call them "peanuts." But why would you pass up the chance to say "goober"? Danielle Segura/Flickr hide caption 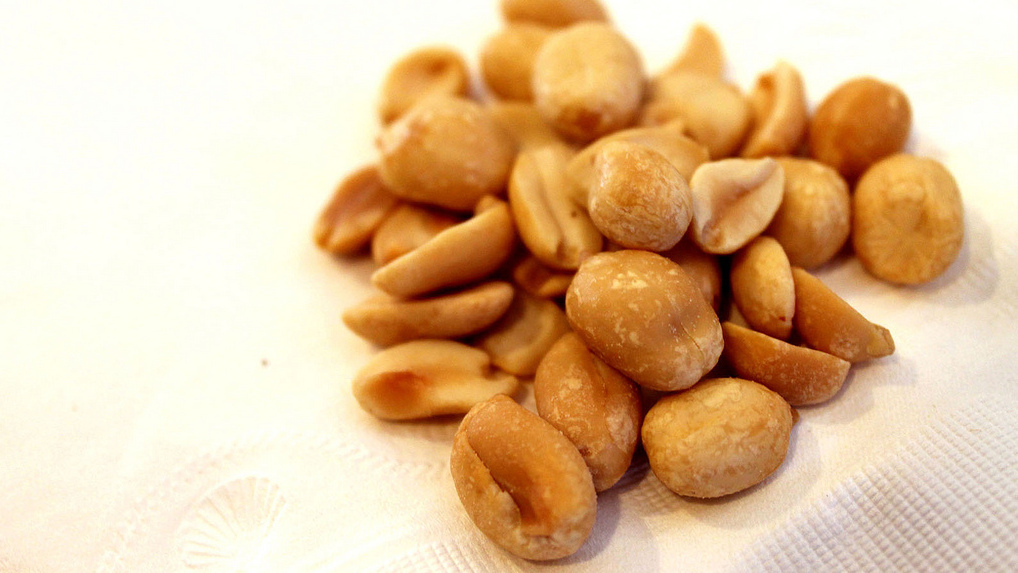 Crunchy, salty, delicious goobers. Sure, you could call them "peanuts." But why would you pass up the chance to say "goober"?

In Africa and Asia, however, peanuts were a hit. In West and Central Africa, particularly, they became a staple crop, adopted by communities who appreciated the plant's resilience and quickly worked it into their cuisine.

And when Africans were enslaved by the millions, they brought peanuts with them.

So a crop native to South America was picked up by Spanish and Portuguese traders, brought to Africa and raised locally, and carried on slave ships to what's now the U.S. — a very roundabout way to travel a few thousand miles north. On that final leg of the trip, peanuts brought with them their most recent names — nguba, in Kongo and Kimbundu (named for the resemblance to a kidney); mpinda, in Kongo. These inspired some of the first English words for the true peanut: "goober" and "pindar."

A Peanut By Any Other Name Would Be As Unappreciated

In the 19th century, peanuts were grown by slaves for their own sustenance, or else fed to hogs; white Americans didn't regard them as good eating. The subtext of "Eating Goober Peas" is that Confederate soldiers were really struggling when that's all they had for sustenance.

That might be why, for many years, the kinds of Americans who wrote in books and newspapers didn't bother to pick a standardized name for the plant. "The ground pea of the South, or as it is sometimes called, the gouber or pindar pea," said one patent application in 1848. "The earthnut, groundnut, goober, pindar or peanut" is how the Department of Agriculture phrased it. An 1884 guide referred to the "mandubi, pea-nut, monkey nut."

Amid this swirl of synonyms, the triumph of "peanut" was far from guaranteed. "Pindar" had a head start — the Oxford English Dictionary lists a first reference in 1684, predating "peanut" by more than a century. "Earth nut" was a serious contender:

But by the 20th century, "peanut" had won, despite its horticultural confusion.
And as the peanut went from being an unappreciated slave food to a multimillion-dollar crop the other words fell out of use. "Pindar" lingers in only a few corners of the South. Earth-nut, ground-pea and other variants are all but gone.

But "goober"? Goober hangs on. Throughout the South, you might eat goober pie, goober cake or plain old roadside goobers, freshly boiled. And then, of course, there was Andy Griffith's Goober Pyle: Gomer Pyle's cousin, the good-hearted, dim-witted gas station attendant who really, truly did not have a gift for impressions.

And when applied to people — Goober Pyle or otherwise — the word retains a little of the food's old bad reputation. Peanuts might be respectable now, but goobers are hardly high-brow. A goober's a doofus, a goofball, a few legumes shy of a full meal. You might say it with affection — "What a goober!" — but it's never praise.