Accessibility links
Segregated From Its History, How 'Ghetto' Lost Its Meaning : Code Switch The original root language of "ghetto" is unknown. But its original meaning has long been clear. By the 17th century, Rome and Venice had segregated Jewish residents into ghettos. 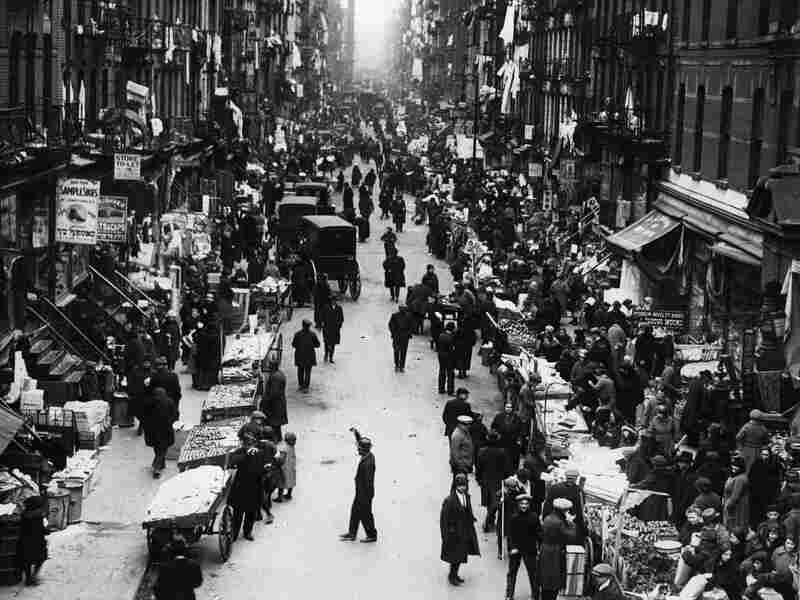 The pushcart market in the East Side Ghetto of New York's Jewish Quarter was a hive of activity in the early 1900s. Ewing Galloway/Getty Images hide caption 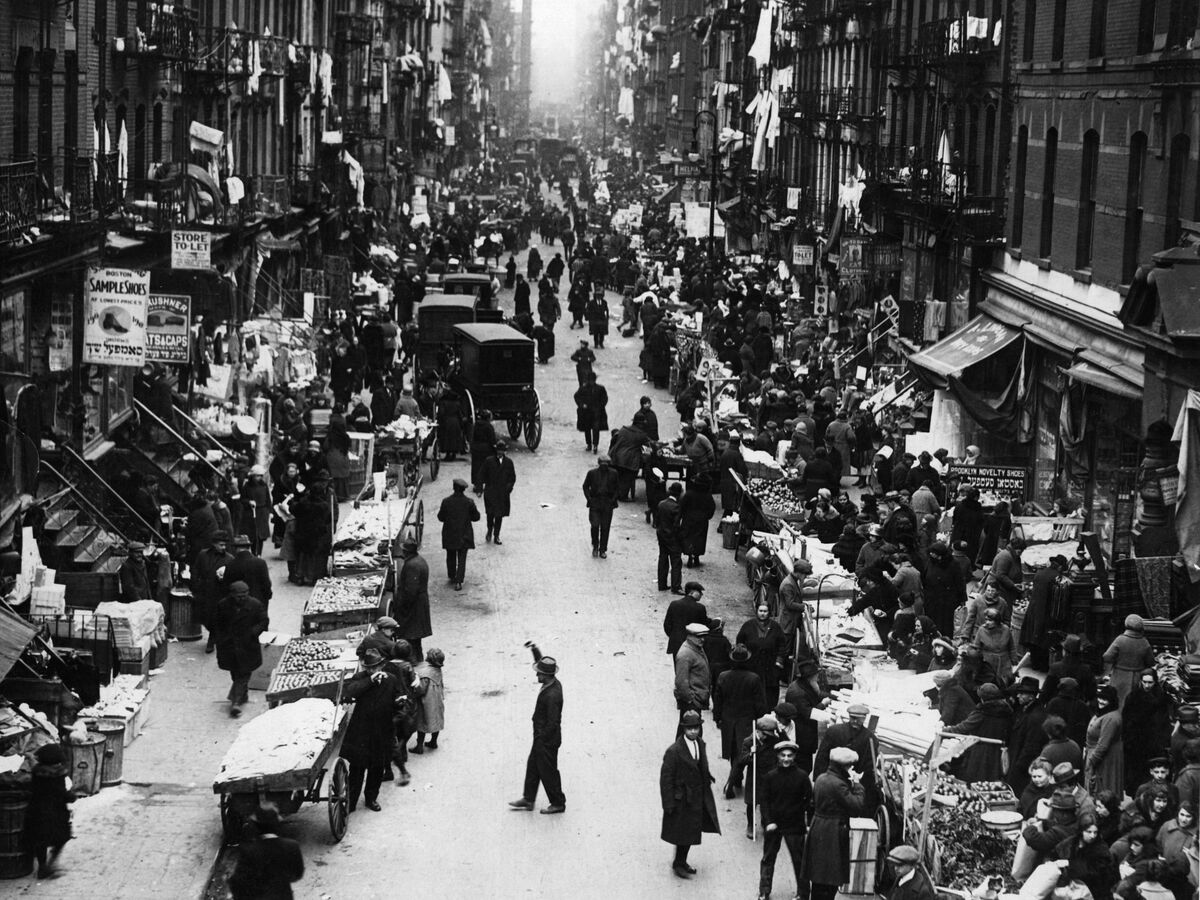 The pushcart market in the East Side Ghetto of New York's Jewish Quarter was a hive of activity in the early 1900s.

As you might have gathered from our blog's title, the Code Switch team is kind of obsessed with the ways we speak to each other. Each week in "Word Watch," we'll dig into language that tells us something about the way race is lived in America today. (Interested in contributing? Holler at this form.)

The word "ghetto" is an etymological mystery. Is it from the Hebrew get, or bill of divorce? From the Venetian ghèto, or foundry? From the Yiddish gehektes, "enclosed"? From Latin Giudaicetum, for "Jewish"? From the Italian borghetto, "little town"? From the Old French guect, "guard"?

In his etymology column for the Oxford University Press, Anatoly Liberman took a look at each of these possibilities. He considered ever more improbable origins — Latin for "ribbon"? German for "street"? Latin for "to throw"? — before declaring the word a stubborn mystery.

But whatever the root language, the word's original meaning was clear: "the quarter in a city, chiefly in Italy, to which the Jews were restricted," as the OED puts it. In the 16th and 17th centuries, cities like Venice, Frankfurt, Prague and Rome forcibly segregated their Jewish populations, often walling them off and submitting them to onerous restrictions.

By the late 19th century, these ghettos had been steadily dismantled. But instead of vanishing from history, ghettos reappeared — with a purpose more ominous than segregation — under Nazi Germany. German forces established ghettos in over a thousand cities across Europe. They were isolated, strictly controlled and resource-deprived — but unlike the ghettos of history, they weren't meant to last. 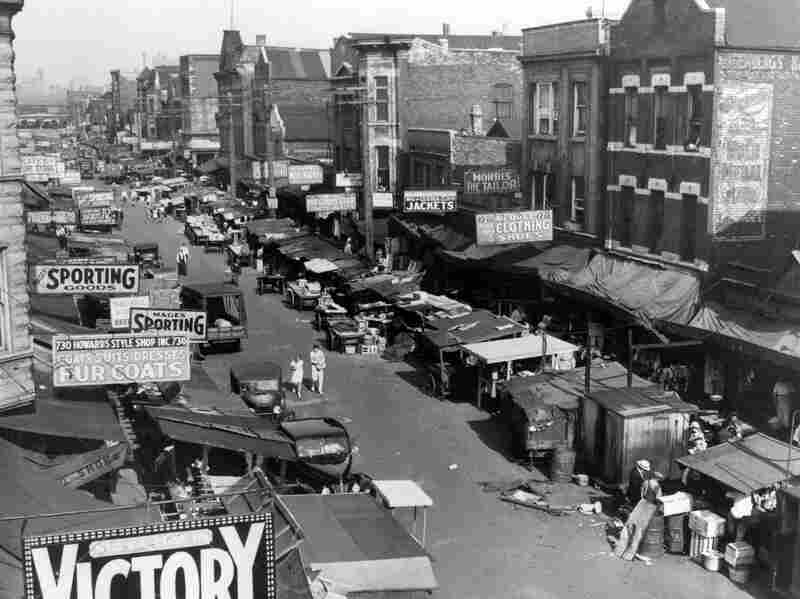 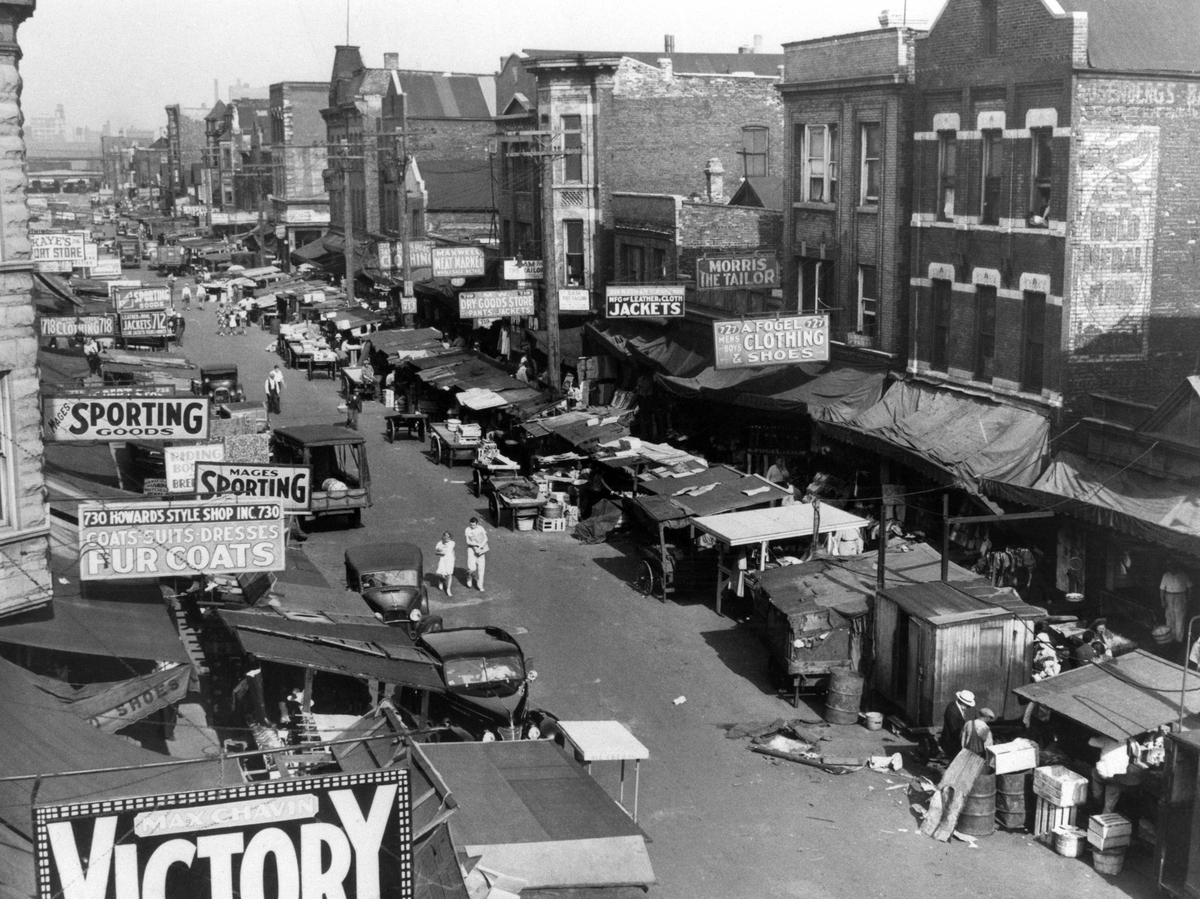 Maxwell Street, a teeming marketplace of Chicago's ghetto, on July 22, 1939.

Reviving the Jewish ghetto made genocide a much simpler project. As the Holocaust proceeded, ghettos were emptied by the trainload. The prisoners of the enormous Warsaw ghetto, which at one point held 400,000 Jews, famously fought their deportation to death camps. They were outnumbered and undersupplied, but some managed to die on their own terms; thousands of Jews were killed within the walls of the ghetto, rather than in the camps. 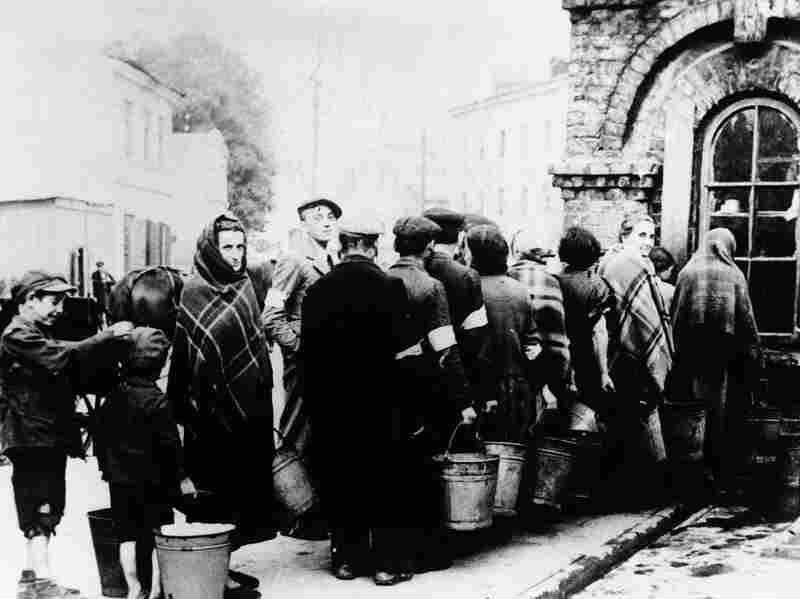 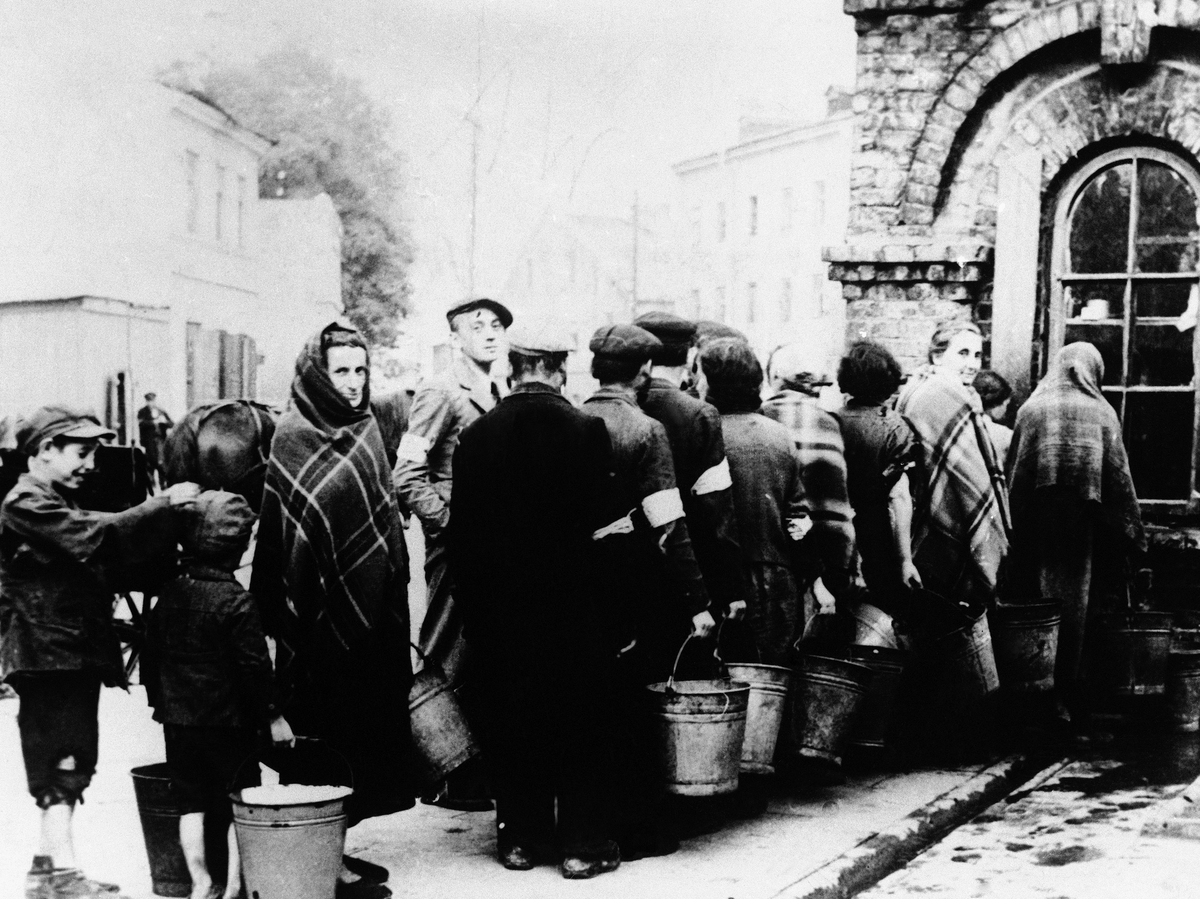 Jewish ghettos were finally abolished after the end of World War II. But the word lived on, redefined as a poor, urban black community.

From Anti-Semitism To Race And Poverty

As early as 1908, "ghetto" was sometimes used metaphorically to describe slum areas that weren't mandated by law but that were limited to a single group of people because of other constraints. That year, Jack London wrote of "the working-class ghetto." Immigrant groups and American Jews were also identified as living in these unofficial "ghettos."

Even as those areas were identified, they were already transforming. A 1928 study of American Jewish ghettos explained why such communities were being "invaded" by people of color: "the Negro, like the immigrant, is segregated in the city into a racial colony. Economic considerations, race prejudice and cultural differences combine to set him apart." "Race prejudice" included laws and lending practices, from redlining to restrictive covenants, explicitly design to separate white and nonwhite city dwellers.

After World War II, "white flight" from inner cities further exacerbated racial segregation. By the '60s and '70s, so-called "negro ghettos" in cities like Chicago, New York and Detroit were central to the cultural conversation about poverty. "Something must be done, and done soon, to build a strong and stable family structure among Negro ghetto dwellers," an Ebony editorial contended in 1966; countless academic articles argued about the causes of ghetto poverty.

And in 1969, Elvis — in his late-career comeback — took a turn for the mournful with "In the Ghetto."
Elvis (and many cover singers after him) sings about Chicago's crowded black ghettos with an outsider's concern: "People, don't you understand / the child needs a helping hand / or he'll grow to be an angry young man some day."

Almost half a century later, Busta Rhymes used the same song title to celebrate the ghetto as a source of identity.

Busta Rhymes doesn't ignore the painful effects of intergenerational poverty. The ghetto is where "crackhead chicks still smoke with babies in they belly." But he's not calling for help or claiming that all ghetto-dwellers are miserable. The ghetto is also "where you find beautiful women and rugrats / and some of the most powerful people, I love that!"

Ghettos were always defined by lack of choice — they were places inhabitants were forced to live, whether by anti-Semitic governments, discriminating neighbors or racist practices like redlining. Sociologist Mario Small argues that these limits have largely been lifted, such that researchers should no longer consider "ghetto" a useful word for urban slums.

And indeed, use of the word "ghetto" in print has been declining since the early '70s. But slang variants have been rising in popularity since before the turn of the millennium. And a quick glance at social media suggests they're not going away; on a recent weekday, twitter users referenced "ghetto" almost 20 times per minute.

What Do We Do About America's Racial Wealth Gap?

"Being ghetto," or behaving in a low-class manner (see also: "ratchet"). "Ghetto fabulous," flashy glamour without the wealth. "Ghetto" as an adjective, roughly synonymous with "jury-rigged," for anything cobbled together out of subpar materials.

Segregation In America: 'Dragging On And On'

Many commentators have objected to these terms. Using ghetto as an insult is, as our own Karen Grigsby Bates has pointed out, inherently classist. Ta-Nehisi Coates once wrote that "ghetto, in its most unironic usage, is a word for people you don't know. It's a word that allows you to erase individuals and create boxes." And arguments that the terms are race-neutral are, well, unconvincing.

This current use of "ghetto" is also curiously mismatched to the history of ghettos. Venice's ghettos were home to prosperous merchants. Warsaw's ghettos housed resistance fighters. Harlem was a ghetto when it hosted a transformative literary and cultural movement. Chicago's Bronzeville was home to the black professional class — ghettos, by removing citizens' freedom to live where they want, force schoolteachers next to drug dealers, working families next to whorehouses.

But slang references to "ghetto culture" don't refer to any of those legacies, or to the perseverance it takes to survive under such limitations. ("You surviving in the ghetto," raps Busta Rhymes, "you can make it anywhere.") Instead, they reduce ghetto life to poverty and poor behavior. Acting ghetto. Being ghetto. Dressing ghetto.

Ghetto, in slang usage, has entirely lost the sense of forced segregation — the meaning it held for centuries. In a rapid about-face, it's become an indictment of individual choices.