Accessibility links
Who Runs The World? 'Time' Magazine Says Beyoncé : Code Switch In the same week that Lupita Nyong'o was declared the most beautiful woman in the world by People magazine, Time named Beyoncé one of the world's "100 Most Influential People." 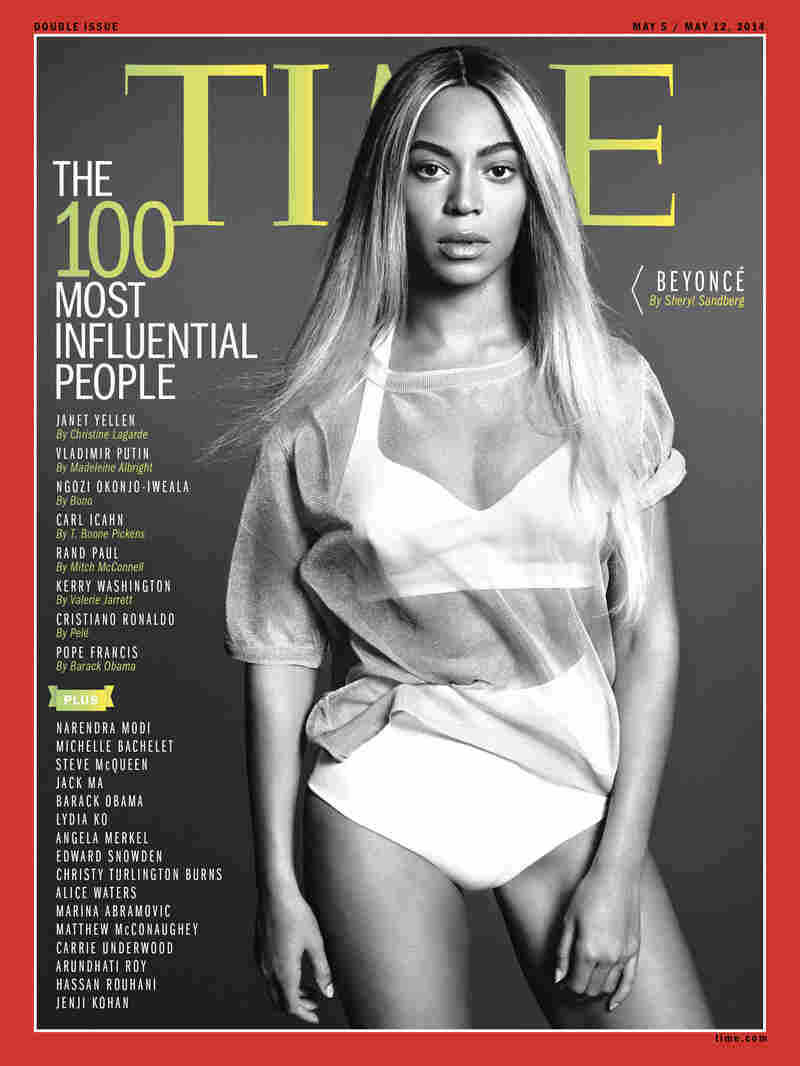 This image released by Time shows entertainer Beyoncé on the cover of the magazine's "100 Most Influential People" issue. Time Magazine/AP hide caption 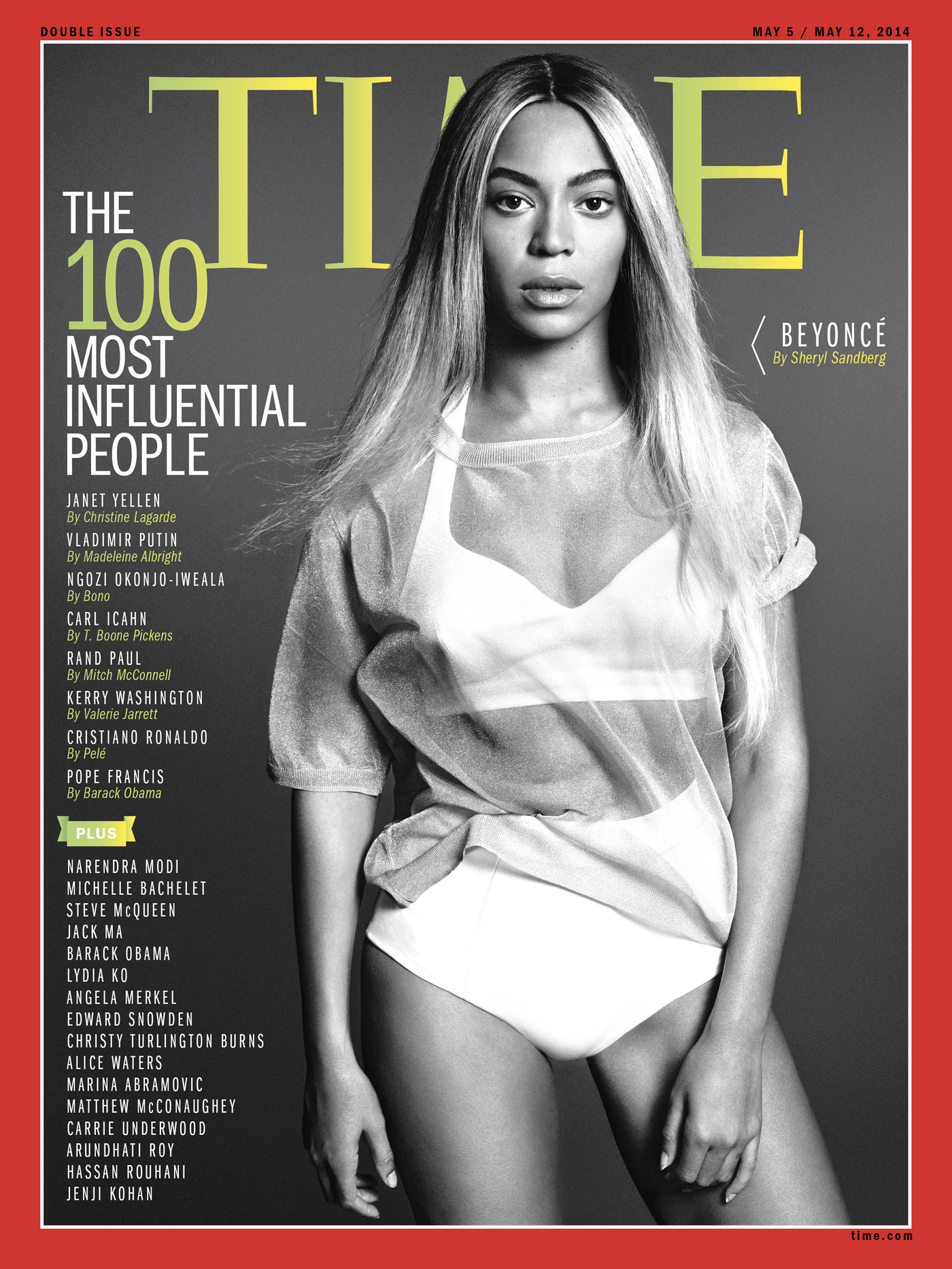 This image released by Time shows entertainer Beyoncé on the cover of the magazine's "100 Most Influential People" issue.

The euphoria over Lupita Nyong'o's appearance on People's "50 Most Beautiful" list was still swirling on the Interwebs when word came, a mere four days later, that Time's "100 Most Influential" issue was on newsstands. Staring out at us was Beyoncé Knowles Carter, dressed in what appears to be a white two-piece bathing suit with a see-through cover-up.

Facebook's Sheryl Sandberg did the honors: "Beyoncé has insisted that girls 'run the world' and declared, 'I'm not bossy, I'm the boss.' She raises her voice both on- and off-stage to urge women to be independent and lead."

Unlike Nyong'o's appearance, which seemed to signal in a straightforward manner that beauty comes in all shades and colors, Beyoncé's Time cover might raise more questions than it answers: More influential than, say, Michelle Obama? Scores of postings on social media — by women and men — wondered aloud what kind of message the cover sends young women and girls: Wear what you want, just do your job? I'm so powerful I can wear what I choose, and this is what I choose? I don't mind objectifying myself as long as I'm choosing to do that?

Don't hate, celebrate, urges The Root's Demetria Lucas. How often do black women get this kind of positive visibility from the mainstream media? Lucas writes: 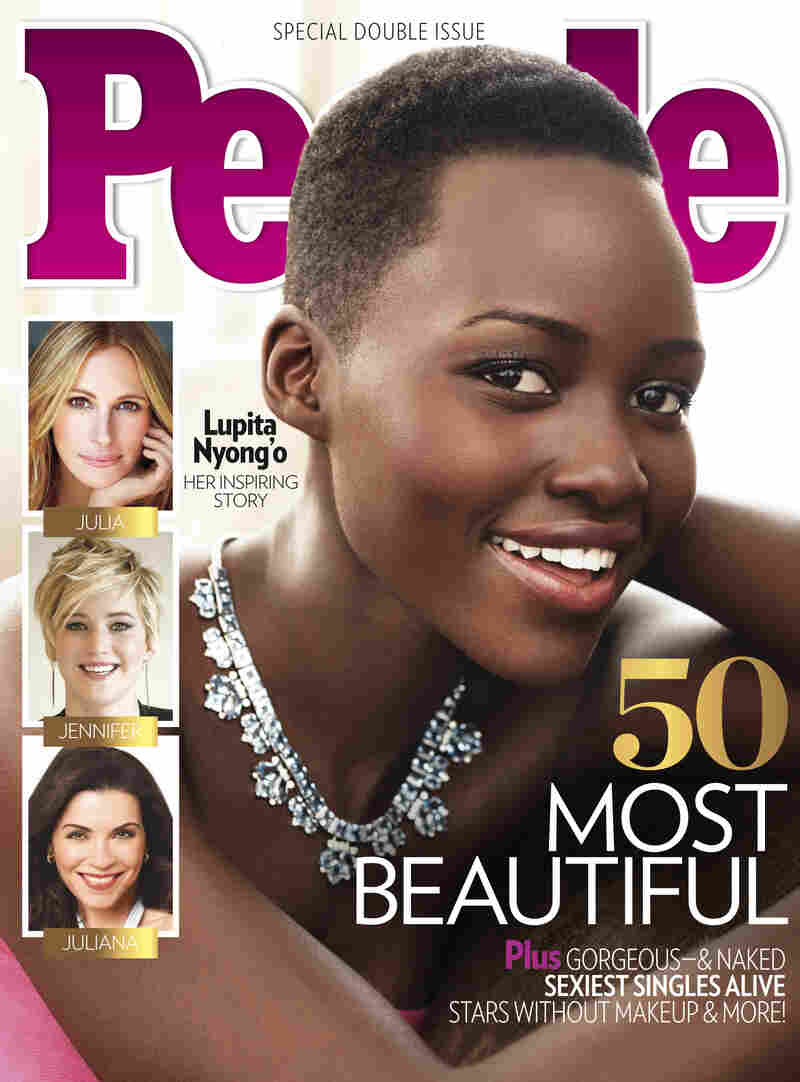 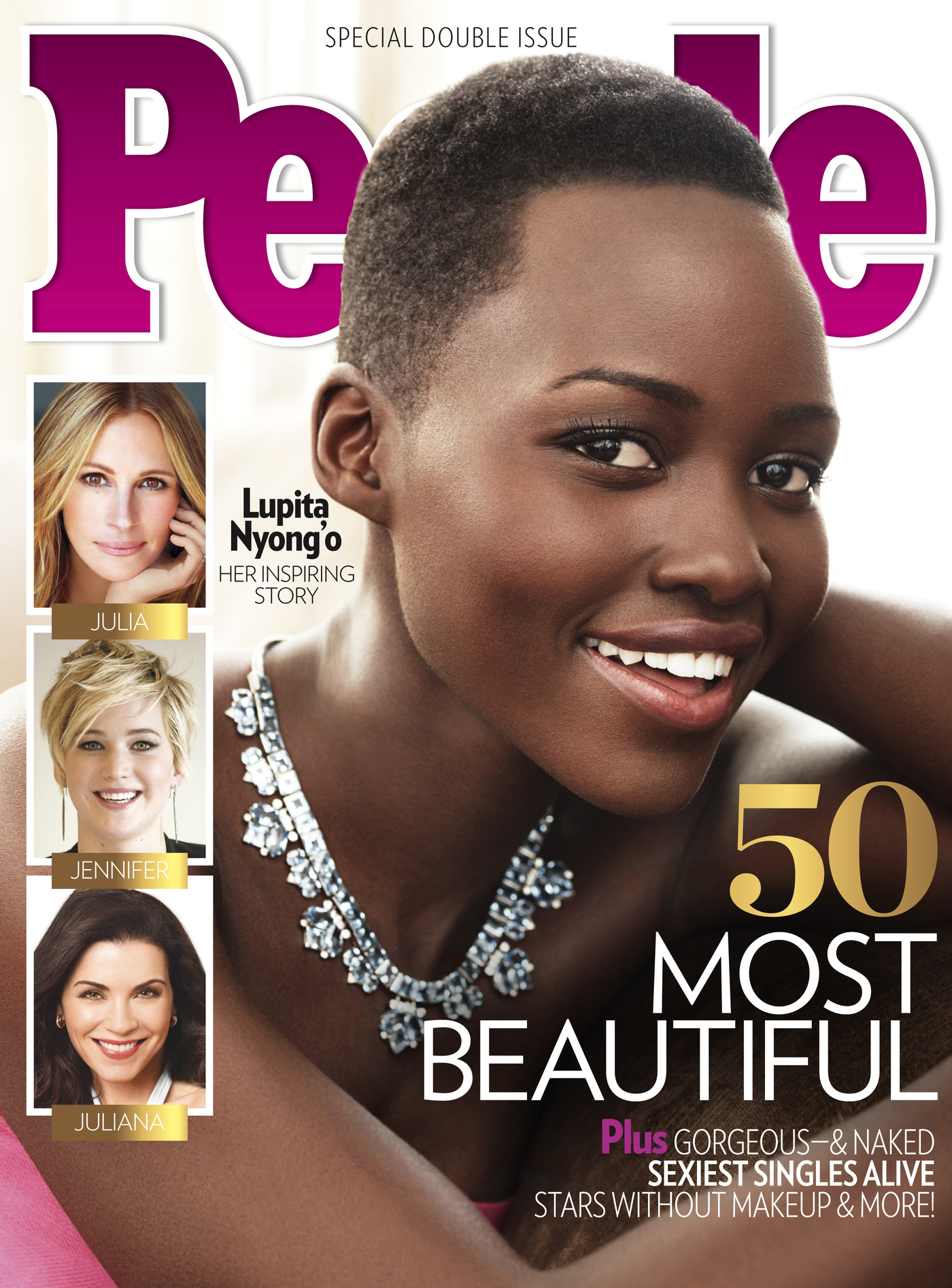 Lupita Nyong'o was recently featured on the cover of People Magazine's "World's Most Beautiful" issue.

I'm far from being Beyoncé's biggest fan — though I love the latest album — but it's hard to argue that she doesn't have the influence to earn that Time cover spot. I expected people to try to argue against it anyway, because, well, that's what the Internet is there for. But nope, folks surprised me. Instead, everyone's talking about what Beyoncé looks like on the Time cover, as if she's over there with Nyong'o on People's "Most Beautiful" cover.

I have to ask, though: Should it really matter what she looks like?

As Lucas suggests, Beyoncé runs an empire. She's a powerful wife of a powerful man and the mother of a baby who has received at least as much attention as North West and maybe more than little Prince George (in the States, anyway). On the other hand, it's hard to imagine that Jeff Bezos or Pope Francis (they're on the inside) would have agreed to appear on Time's cover in a Speedo.

Will Bey's two-piece appearance sell lots of issues for Time? Of course. Will it generate lots of chat? Of course? Did the magazine take several portraits, then decide Bey's was The One? Most probably — or maybe One of The Ones, as they often do multiple covers for this issue and release them concurrently. But be honest: Who would pull your eye to the cover more — Beyoncé or Charlie Rose? (Yep, he's inside, too.)

What does it mean that two widely read Time Inc. magazines put black women on their covers in the same week? Maybe nothing. Maybe it's just happenstance. (And maybe we should be focusing on the fact that when invited to nominate people to the "100 Most Influential," readers suggested Laverne Cox, the transgender actress who shines in the hit Netflix series Orange Is the New Black. Yet, no cover.)

As usual, it might pay to follow the money: cosmetics, soft drinks, cellphones — Bey's been paid to promote all of them. And they all buy ads. In magazines.

Who runs the world?