Accessibility links
California's Latino Plurality Brings A Sense Of Déjà Vu : Code Switch For the first time, Latinos are the largest population group in California. But it's not the first time that Californians of Spanish descent have outnumbered non-Hispanic whites in the state.

In March, provided California state demographers guessed it right, the state reached a historic milestone: For the first time, Latinos are the largest population group in California.

California Department of Finance demographers predicted that by March, Latinos would outnumber non-Latino whites to become 39 percent of the state's population, while the latter would drop to about 38.8 percent. There won't be hard evidence for months to come, at least, but demographers are standing by their projection.

But while this Latino plurality is a first in California, it comes with a sense of déjà vu. Even though Hollywood nostalgia paints a picture of a mostly-white California of old, this is not the first time that Californians of Spanish descent — Hispanics, in other words — have outnumbered non-Hispanic whites in this onetime Spanish and Mexican outpost.

In recent decades, the narrative of Latino population growth in California has been roughly this linear one: There's a shrinking white majority and a growing Latino population, with Latinos arriving in large numbers, outnumbering and displacing whites.

But there was a time, way back, when the tables were turned.

In a letter written in 1846 to a member of the U.S. Senate, early California land-owner John Marsh provided an estimate of who resided in the soon-to-be state. From a Stanford University history website:

The letter included the following estimate of California's population: 7,000 persons of Spanish descent; 10,000 civilized or domesticated Indians; 700 Americans; 100 English, Irish and Scotch; about 100 French, Germans and Italians. (These data seem to refer to male population only.)

It was just an approximation. But people "of Spanish descent" made up a significantly large share of it, more than seven times the estimated number of non-Spanish-descended whites and outnumbered only by native Californians (very much undercounted, most likely, as the only ones included were those deemed "civilized or domesticated").

Then, a couple of years later, James Marshall discovered gold in the Sacramento Valley.

The Gold Rush that began in 1848 radically altered the state's demographic makeup overnight, drawing hordes of hopeful prospectors from around the country and elsewhere.

By the time of the U.S. census in 1850, the year that California became a state, its non-native, non-Spanish-descended white population had swelled to around 77,000. Meanwhile, Californians of Spanish descent, mostly Mexican, numbered around 15,000, or 17 percent of the population.

Which is only a hair less than the 19 percent that Latinos represented in 1980, during a time when some believed that California's Latino population was suddenly exploding.

What happened over the course of 130 years that, by 1980, had led to this perception?

"The share of Hispanics fell," Lopez explains, "then rose."

It plummeted to the single digits in the years that followed California statehood, as more non-Latinos continued to arrive. Between 1850 and 1900, the state's share of Latinos fell from 17 percent to only 4 percent. Meanwhile, the non-Latino white population jumped to almost 91 percent.

The Latino population remained in the single digits through the 1950s. There were heavier Latino pockets here and there, parts of Los Angeles included. And in the fields, at least, there was a steady presence of guest workers from Mexico. But Latino residents remained a small minority.

"You could say that Latinos had practically disappeared from California," says University of Southern California demographer Dowell Myers, "overlaid by massive migration from all over the U.S."

A group of children visit the Avila Adobe, the oldest existing house in Los Angeles, Calif. When the house built in the early 19th century, the state had a large population of Spanish descendants. Gabriel Bouys/AFP/Getty Images hide caption 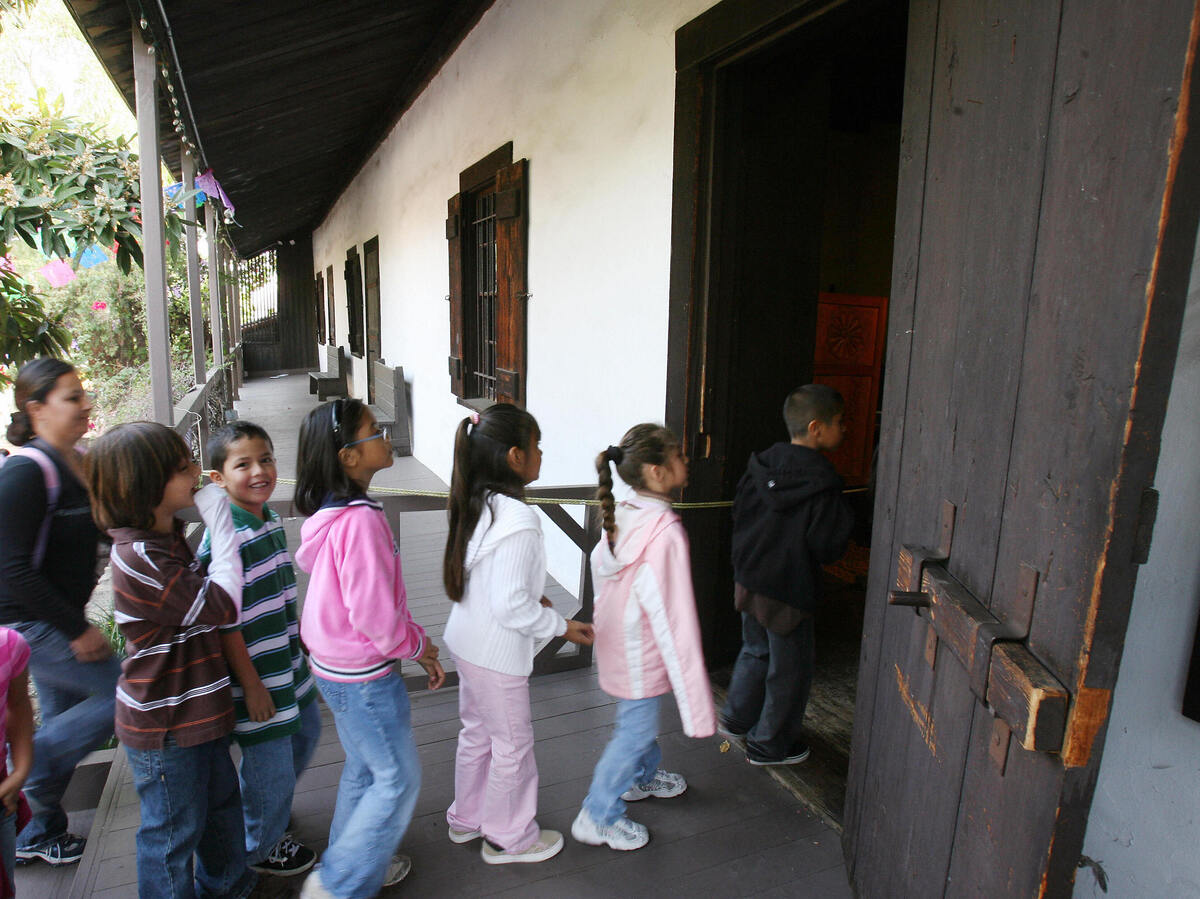 A group of children visit the Avila Adobe, the oldest existing house in Los Angeles, Calif. When the house built in the early 19th century, the state had a large population of Spanish descendants.

For many, it was this majority-white era that came to symbolize California in American popular lore – blondes, Beach Boys and the like. But the nostalgic idyll that some hold from that era was in fact an anomaly, Myers says.

"They remember back to a time around 1960 and 1970 when there were hardly any Latinos and they think that was normal," Myers says. "But that was actually abnormal. That was a low point. Now, we are moving back to normal."

Back To The Future

The state began inching back toward its old population breakdown after immigration rules changed in 1965, making for more migration from Latin America. By 1970, the state's Latino population had reached 13.5 percent.

A decade later, California's Latino population hit 19.3 percent, the first time it had been this high in more than a century: "By 1980, Latinos are back to their 1850 share," Lopez says.

Since then, a new normal has kicked in. By 2010, Latinos accounted for almost 38 percent of the state's population. But as migration has slowed, much of that growth is now coming from the second and third generation, driven by native U.S. births.

Despite the Latino-plurality tipping point, parity is likely a long way off: Latino voter participation still lags behind that of other groups. According to a UC-Davis study last year, Latinos made up 26.3 percent of Californians who were qualified to vote in 2012, but only 19.7 percent of California voters. But this is expected to change with time, especially as more U.S.-born Latinos hit voting age; the study anticipates Latinos making up nearly 30 percent of the state's voters by 2040.

By then, another population milestone will be on the horizon: According to state projections, Latinos are expected to account for nearly half — 48 percent — of Californians in 2060.