Accessibility links
Critics Find Little Humor In 'SNL' Writer's Jokes About Slavery : Code Switch Comedy often pushes the boundaries of taste and sensibilities, as SNL writer Leslie Jones did with her slavery skit this past Saturday. Some laughed, some howled. 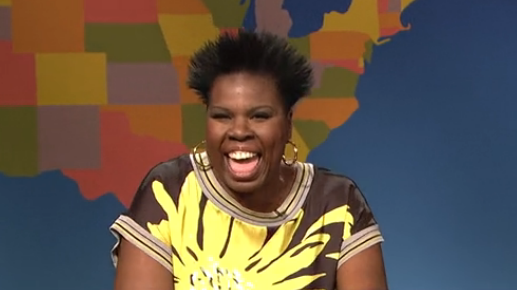 Almost 21 years ago, Whoopi Goldberg was honored at the New York Friars' Club. More than 3,000 people crowded into the New York Hilton to hear Goldberg roasted by her celebrity friends.

The Friars' is a show business charity, and their roasts are famous. Good taste and delicacy are usually checked in the cloak room, and after a series of predictably ribald remarks from his colleagues the honoree gets to lob back an in-kind response. Unlike some of the celebrity roasts we've see in this decade, the Friars roasts are not even recorded, let alone televised at a later date. (Just as well — saves a lot of bleeps and lawyers' fees...)

The opening monologue for Goldberg's roast was given by actor Ted Danson, her then-lover, who walked out on stage... in blackface. Or to be more technically correct, deep brown face. (And whitened lips and a top hat. Yep.) He proceeded to riff on how their interracial relationship had been criticized, at one point, referring to any children they might consider having as diarrhea-colored babies.The monologue was so offensive, several guests, including talk show host Montel Williams and former Mayor David Dinkins, walked out. The late film critic Roger Ebert wrote about the evening in his blog, Roger Ebert's Journal, calling Danson's performance "the worst train wreck since The Fugutive."

As might be imagined, the uproar was considerable. Kind of like the outrage in the wake of writer Leslie Jones' maiden on-camera appearance on Saturday Night Live's "Weekend Update." Jones didn't come out in blackface, but she did bug her eyes, roll her neck and make jokes about how she would have been a hot prospect in antebellum life:

"Massa woulda hooked me up with the best brother on the plantation," she told uncertain-looking co-anchor Colin Jost. "And every nine months, I'd be popping out a superbaby: Shaq, Kobe... LeBron!"

Yep. Jones and Goldberg had the same kind of mission — to get discomfort with race out in the open — and many of their critics, then and now, their missions fell flat. In Danson's case, his audience just wasn't comfortable watching a white guy in black face joke about race. Even if he did have a black girlfriend. In Jones,' many television viewers, especially black ones, just weren't ready to watch a black woman joke about black historical trauma in front of a predominately white audience.

Conversation About 'SNL' And Diversity 'Just Getting Started'

Here's The Funny Thing About Black Women On 'SNL'

Both Goldberg and Jones had similar responses. Ebert quotes Goldberg's defense of Danson at the dinner: "Let's get these words out in the open. It took a whole lot of courage to come out in blackface and in front of 3,000 people. I don't care if you didn't like it. I did."

Jones tweeted a series of increasingly testy responses defending her SNL appearance. She explained that the jokes came from her own pained realization that black men in the current century don't find her attractive, but that she "would always have had a man because of the breeding" in pre-emancipation days.

"Y'all so busy trying to be self-righteous you miss what the joke really is," she tweeted of her black critics. Finally, she lamented she had to defend herself to her own people, but promised criticism wasn't going to stop her: "Im gonna go even harder and deeper now."

Both Jones and Goldberg feel that, in Jones' words, "You need to get over it." But not everyone gets over trauma — even ancestral trauma — in the same way or at the same pace.

It's not that slavery, like most everything else in life, can't be joked about. Key and Peele have done it brilliantly. So has Chris Rock. And Richard Pryor. And his head writer, Paul Mooney. (Warning: The videos we're linking to are for adult listeners, so use headphones.) But in their hands, racial humor was wielded like a scalpel, precisely and with purpose, not swung about, willy nilly.

Comics say that nothing, nothing, should be exempt from jokes. Some postings on black websites and social media agree with that. Others aren't so sure. Jones and Goldberg are both black and female in a profession where both things are relative rarities. At base, it might not be so much about gender as it is about humor: If you're going to step out there and joke about race, and especially about the slave experience, you'd damn well better be funny.

A lot of people thought Leslie Jones wasn't last Saturday. But she has vowed to go "deeper and harder," so we're probably going to get more of her decidedly edgy racial humor going forward.

Fasten your seatbelts. More likely than not, it's gonna be a bumpy ride.