Accessibility links
Recall That Ice Cream Truck Song? We Have Unpleasant News For You : Code Switch This is the story of why our beloved ice cream truck plays blackface minstrel music that sends kids dashing into homes in a Pavlovian frenzy searching for money to buy a Popsicle.

Editor's note: This article is about a virulently racist song. Read no farther if you wish to avoid racist imagery and slurs. 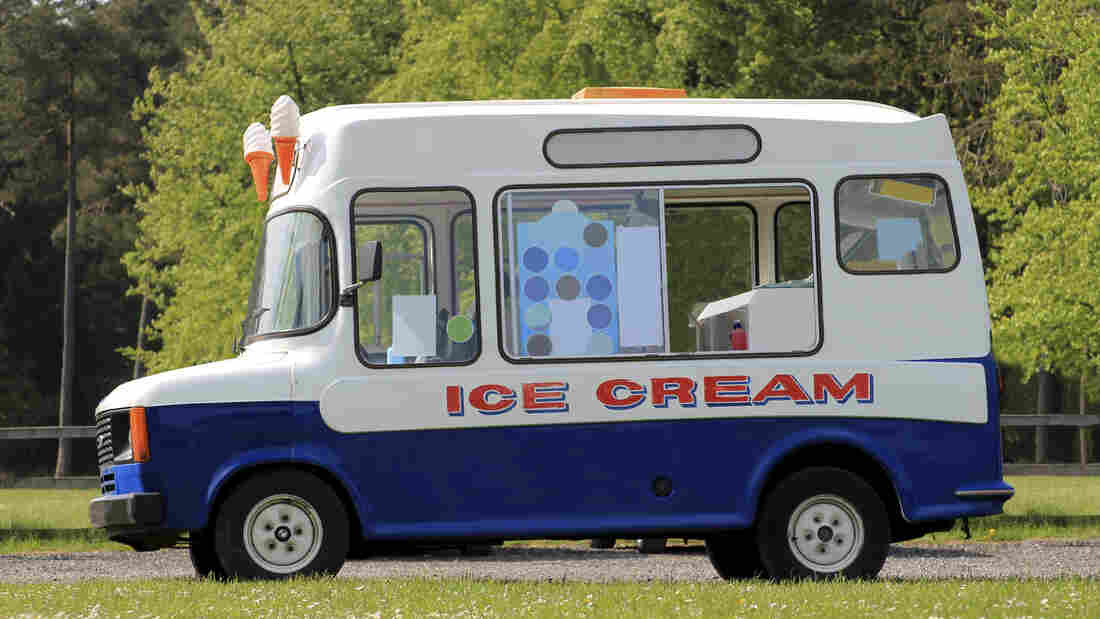 This story may well sour any pleasant childhood memories of chasing after ice cream trucks in the summer. iStockphoto.com hide caption 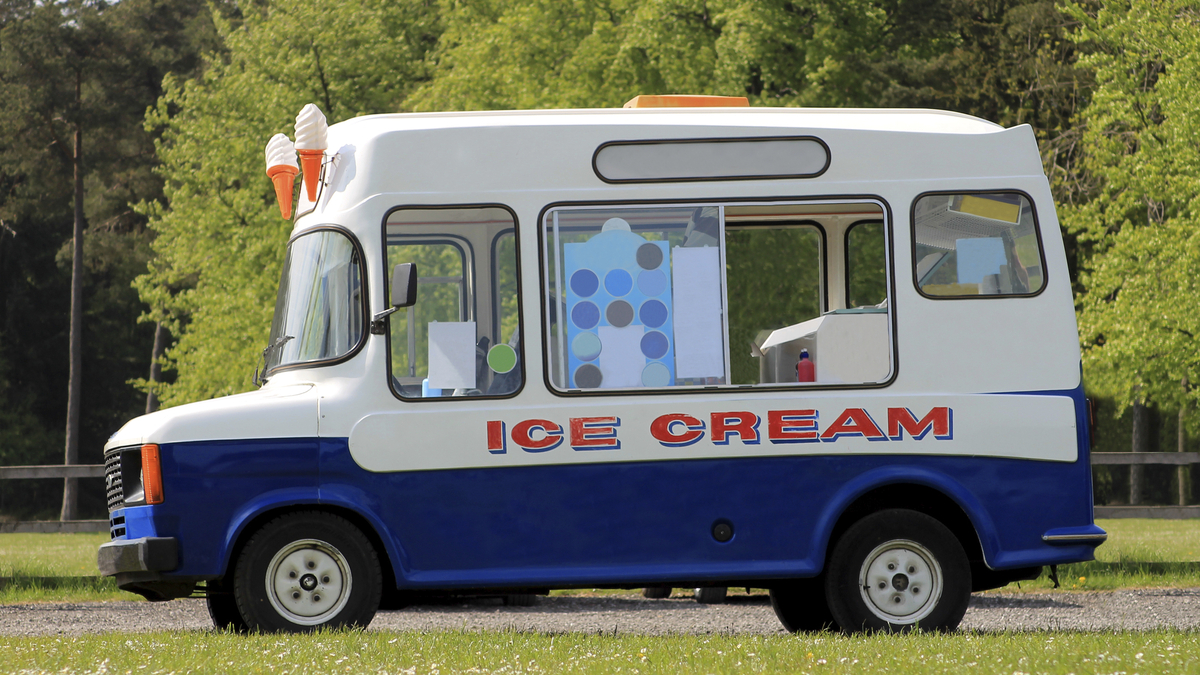 This story may well sour any pleasant childhood memories of chasing after ice cream trucks in the summer.

"Nigger Love A Watermelon Ha! Ha! Ha!" merits the distinction of the most racist song title in America. Released in March 1916 by Columbia Records, it was written by actor Harry C. Browne and played on the familiar depiction of black people as mindless beasts of burden greedily devouring slices of watermelon.

I came across this gem while researching racial stereotypes. I was a bit conflicted over whether the song warranted a listen. Admittedly, though, beneath my righteous indignation, I was rather curious about how century-old, overt racism sounded and slightly amused by the farcical title. When I started the song, the music that tumbled from the speakers was that of the ever-recognizable jingle of the ice cream truck. (For the record, not all ice cream trucks play this same song, but a great many of them do.)

As quickly as it began, the music paused, and this call-and-response ensued:

Browne: "You niggers quit throwin' them bones and come down and get your ice cream!"

My mouth dropped. The music immediately resumed and so did the racism. I soon realized that the ice cream truck song was forever ruined for me, especially once the chorus began:

For here, they're made with a half a pound of co'l

There's nothing like a watermelon for a hungry coon

Origin of the song

I wondered how such a prejudiced song could have become the anthem of ice cream and childhood summers. I learned that though Browne was fairly creative in his lyrics, the song's premise and its melody are nearly as old as America itself. As often happens with matters of race, something that is rather vanilla in origin is co-opted and sprinkled with malice along the way.

For his creation, Browne simply used the well-known melody of the early 19th century song "Turkey in the Straw," which dates to the even older and traditional British song "The (Old) Rose Tree." The tune was brought to America's colonies by Scots-Irish immigrants who settled along the Appalachian Trail and added lyrics that mirrored their new lifestyle.

The first and natural inclination, of course, is to assume that the ice cream truck song is simply paying homage to "Turkey in the Straw," but the melody reached the nation only after it was appropriated by traveling blackface minstrel shows. There is simply no divorcing the song from the dozens of decades it was almost exclusively used for coming up with new ways to ridicule, and profit from, black people. 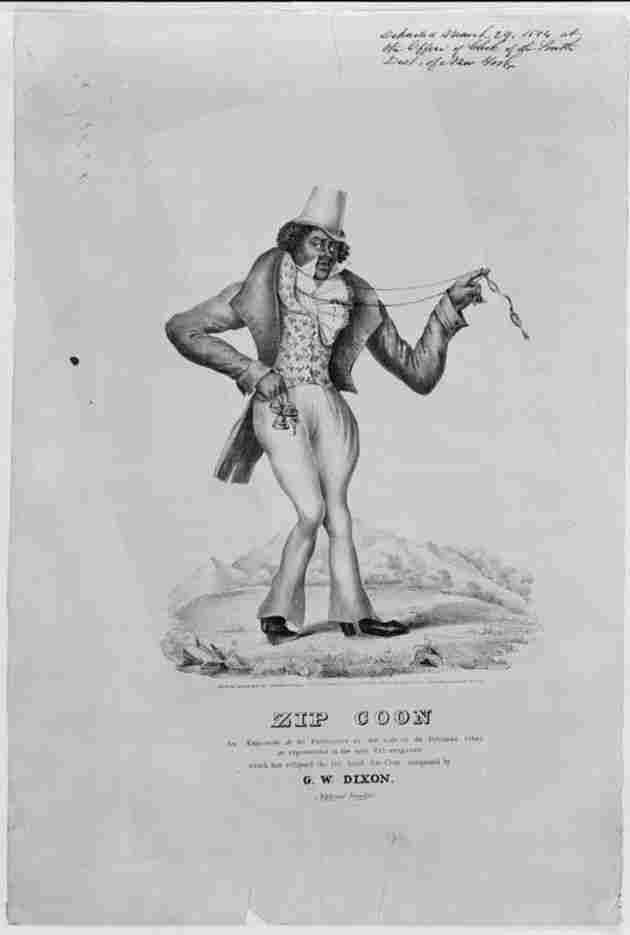 The "Zip Coon" was a blackface character who parodied a free black man attempting to conform to white high society. Library of Congress hide caption 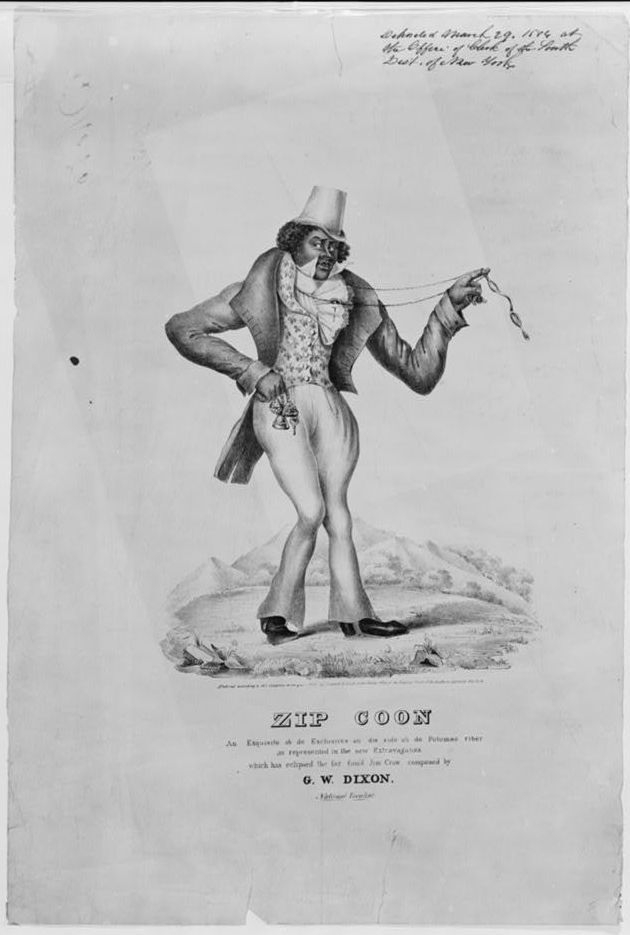 The "Zip Coon" was a blackface character who parodied a free black man attempting to conform to white high society.

In the late 1820s, the music was given new lyrics, which dripped with racism, and titled "Zip Coon." The blackface character of the same name parodied a free black man attempting to conform to white high society by dressing in fine clothes and using big words. Fifty years later in post-bellum America, the character became an archetype of the black urbanite and propelled minstrel shows to the height of their popularity. Zip Coon was the city-slicker counterpart to the dimwitted, rural blackface character whose name became infamous in 20th century America: Jim Crow. These two characters would often interact onstage and were the inspiration for the hugely successful Amos 'n' Andy act decades later.

The lyrics of "Zip Coon" follow the namesake through encounters with possums, playing the banjo and courting a woman whose skin was so black that he calls her "ol Suky blue skin." A century later, it was still celebrated and inspiring America's music. The recognizable melody aside, we've all sung a variation of the lyrics. The chorus goes:

(If this sounds similar to the Academy Award winning "Zip-A-Dee-Doo-Dah," it's because that song was derived from this chorus.)

At the turn of the 20th century, one of the nation's most popular collectibles was the coon card — a postcard with racist artwork, such as bug-eyed, clown-face blacks eating watermelon. These items were essentially the racist version of trading cards and were nearly ubiquitous. Browne meshed the theme of the popular coon cards with the familiar melody, and voilà: "Nigger Love a Watermelon Ha! Ha! Ha!"

The ice cream crossover happened concurrently: 19th century ice cream parlors played the popular minstrel songs of the day. After World War II, the advent of the automobile and the ensuing sprawl required parlors to devise a way to take their products to customers. Ice cream trucks were the solution, and a music box was installed in them as a way to announce their presence in neighborhoods. Naturally, the traditional minstrel tunes of the previous century were employed to evoke the memorable parlor experience.

And this is the story of why our beloved ice cream truck plays blackface minstrel music that sends kids dashing into homes in a Pavlovian frenzy searching for money to buy a Popsicle.

Here in the nation's capital, the cherry blossoms have come and gone. This means the warm weather will soon bring out the ice cream trucks, and I'll be confronted once again by their inconvenient truth. It's not new knowledge that matters of race permeate the depths of our history and infiltrate the most innocent of experiences, even the simple pleasure of ice cream (who can forget Eddie Murphy's famous, NSFW routine about the poor black experience with ice cream trucks?). However, when the reach of racism robs me of fond memories from my childhood, it feels intensely personal again.

Whenever I hear the music now, the antique voice laughing about niggers and watermelon fills my head. I can live with this, but what's to be done on the summer day when my children's eyes light up at the far-off sound of the familiar melody, and they dash in a frenzy toward me for change? Do I empower them with the history of our country, or encourage the youthful exuberance induced by the ice cream truck? Is it my responsibility to foul the sweet taste of ice cream with their first taste of racism?

The answer is intellectually complex, but parental intuition provides clarity. When teeth fall out, I blame the dollar under their pillow on the tooth fairy. When presents appear overnight under the fir tree, I say Santa Claus is the culprit. And so when a song about niggers and watermelon fills the suburban air, I will smile and hand over money from my pocket. The sight of my children enjoying a Good Humor ice cream bar will fight back the racist song that lampooned black people who happened to be in good humor. The delivery of the cold hard truth can wait until another day.

Theodore R. Johnson III is a writer, naval officer and former White House fellow. His writing focuses on race, society and politics. "Talking About Race And Ice Cream Leaves A Sour Taste For Some" is the author's response to critics of this article.