Accessibility links
Young People Want Equality But Struggle To Discuss Bias : Code Switch MTV surveyed 3,000 young people and found that they believe in the importance of equality. But it also found that they grew up not discussing racial issues, making for some complicated responses. 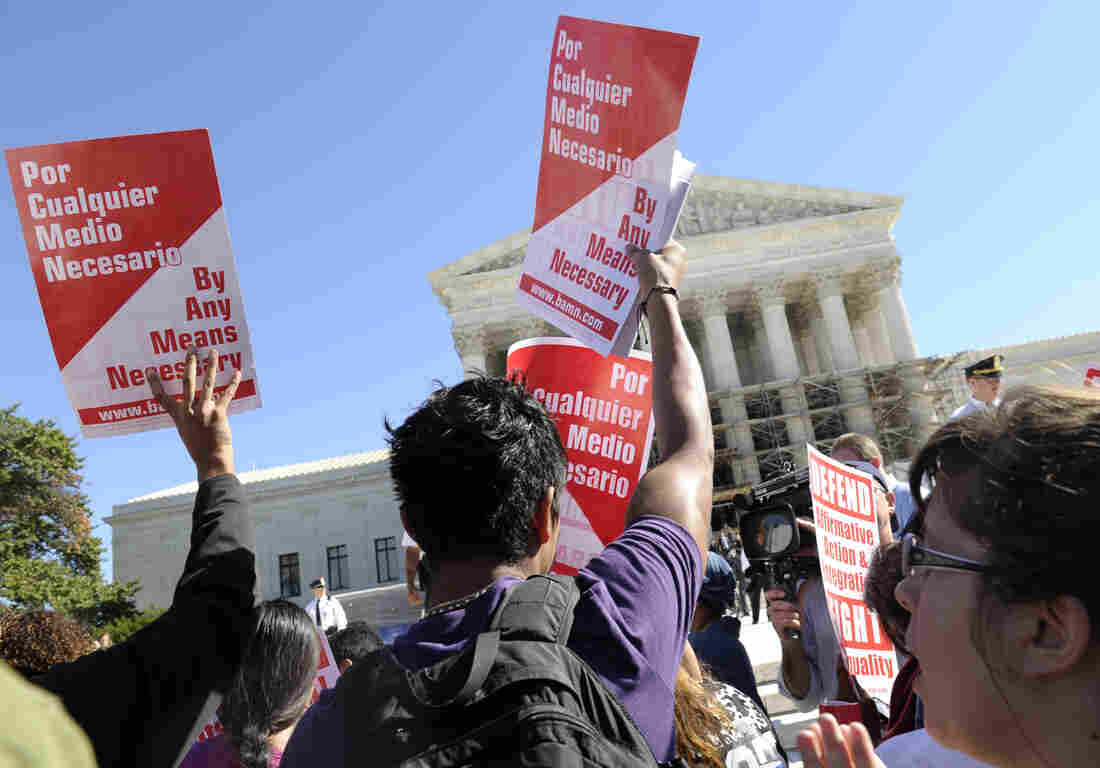 These protesters rallied outside the Supreme Court in favor of affirmative action last fall, but MTV found that majorities of young people, across races, opposed racial preferences of any kind. Susan Walsh/AP hide caption 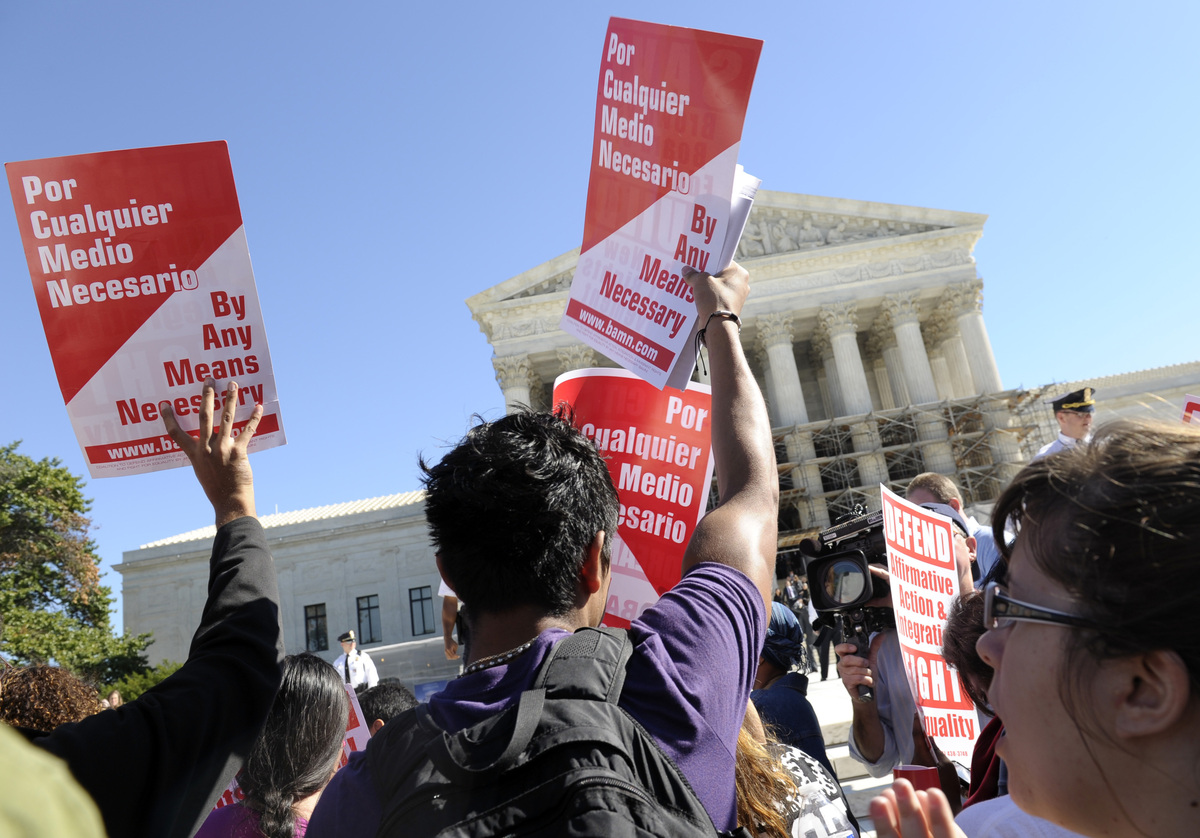 These protesters rallied outside the Supreme Court in favor of affirmative action last fall, but MTV found that majorities of young people, across races, opposed racial preferences of any kind.

One oft-employed generalization about The Kids These Days is that they've grown up free from the legalized discrimination and racial neuroses of older generations, and they will live in a more multicultural world with less racism. But do we even know if that's true?

MTV, that reliable weather vane of popular youth culture, wanted to find out. It polled a nationally representative sample of people ages 14 to 24 about their views on bias and identity.

"The first thing we wanted to just find out was how much our audience knew about bias, talked about bias and cared about bias," Luke Hales, the lead researcher on the survey, told me. The poll was conducted ahead of MTV's Look Different project, which is meant to help young people deal with bias and discrimination in their daily lives.

It's hard to know when you should approach people [about bias], because you never know when it might escalate.

What the pollsters found is that many values are shared across all racial groups, like a strong sense of the importance of equality. But they also found that the respondents seemed to lack historical perspective, which might not be too surprising because of their ages. Another reason they may not have much historical perspective? Race isn't something they talk about very much. (More on that in a minute.)

Here's what they agreed on, across all races. Respondents believed people should be treated the same, regardless of race, and they felt people their age believed in equality more than older people. Most felt President Obama's election was proof that racism was mostly a phenomenon of the past, and that race was not a barrier to accomplishment.

Eight in 10 said they knew someone who was biased; 6 in 10 felt that they were not personally biased. More than half said that bias was a serious problem but that it was mostly hidden, and a solid majority said they'd worked to get rid of their own biases.

The pollsters found that respondents wanted a colorblind society and believed that "never considering race would improve society" — while at the same time they also said "embracing diversity and celebrating differences would make society better."

Kids today! They just can't seem to make up their minds.

... But Affirmative Action? Not So Much.

Significant majorities of both young whites (74 percent) and people of color (65 percent) said they were opposed to preferential treatment being given to one race over another, regardless of historical inequalities.

A few things seemed to be happening all at once here, according to Hales. Most respondents said they did not grow up discussing race in their homes — only a third of whites said race was discussed, and fewer than half of all people of color said the same.

Hales wondered if that might explain something he noticed in the focus groups conducted as part of this survey. (There were eight focus groups with respondents, each consisting of eight people.) "When we first introduced what we 'd be talking about, people became really uncomfortable," Hales said. "There's this weird kind of snake-eating-its-tail thing where so many of our audience was brought up to be colorblind, to not talk about race. There's this whole generation that is scared to tackle this subject, and they were brought up in a world where the topic was fraught with anxiety and danger."

Only about 20 percent said they were comfortable talking about bias. That also might help explain why so many respondents felt ill-equipped to confront instances of bias when they saw it. About 8 in 10 said they believed everyone had a responsibility to address bias. But most people said that it's hard to respectfully talk about bias, and most said they wish they knew more about how to address it when they saw it happening.

There's this weird kind of snake-eating-its-tail thing where so many of our audience was brought up to be colorblind, to not talk about race. There's this whole generation that is scared to tackle this subject, and they were brought up in a world where the topic was fraught with anxiety and danger.

But the way young whites felt about discrimination against whites was countered by the way they answered questions about personal experiences with discrimination. While most respondents said they had experienced bias, the numbers for people of color, women, and LGBTQ folks who said they had were higher.

A solid majority of people of color — 65 percent — said they felt whites had more opportunities than people from racial minority groups, while only 39 percent of whites said the same. There was a huge partisan split on this question as well: most people who identified as Democrats felt this way, while about 4 in 10 Republicans felt similarly.

Emily Hernandez, 21, one of the participants in the focus groups, said she spent a lot of time thinking about issues of bias as a social justice major at Northeastern Illinois University in Chicago. A lot of that is big systemic stuff, like the role race plays in criminal justice and education. "You're way more likely to be arrested, you're more likely to be impoverished, and there's so much that still needs to be overcome," she said. At her mostly Latino primary school in Chicago, she said, she was placed in a class for non-English speakers even though she didn't speak Spanish. (Her parents had to go to her school to sort out the mess.)

But some of the bias has been smaller in scope and more personal. The fact that she's gay has complicated things with her family. She and her black partner get stares when they walk down the street together, and when they go out on dates, she said, servers often split their checks because they assume they're not a couple.

But she said when the encounter is more mean-spirited, she feels placed in an awkward position. "It's hard to know when you should approach people, because you never know when it might escalate," she said.

That, too, was something the pollsters found: Young people felt that addressing instances of bias might come with real repercussions.

"There's the fear in addressing biases that you could be promoting stereotypes," Hales said. One focus group participant, who was a black man, went to a club dressed well per the venue's dress code. He wasn't let in, while white clubgoers were. But he didn't know how to respond. He wanted to complain, but "he didn't want to get angry and be seen as the angry black man," Hales said.

MTV says the Look Different project is meant to address that frustration of not knowing how to respond in situations like this. "We wanted to take these macro, big, structural [problems] and maybe what could be unaddressable and make it very actionable and very personal," Jason Rzepka, an MTV spokesperson, told me.

But Hales said doing that might be difficult for a generation raised to not talk about race, and who grew up in a world where discrimination is hidden from view. "In some ways, the next chapter of this is much more complicated because there aren't dogs on our televisions being sicced on people," he said. "For our audience, this seems like it could be ancient history. There's not a true, clear sense of how recent that is."