Accessibility links
In College Lacrosse, Two Brothers Flirt With Making History : Code Switch Miles and Lyle Thompson are finalists for the Tewaaraton Award, college lacrosse's highest honor. Either would be the first Native to win it — an irony for a sport created by Natives. 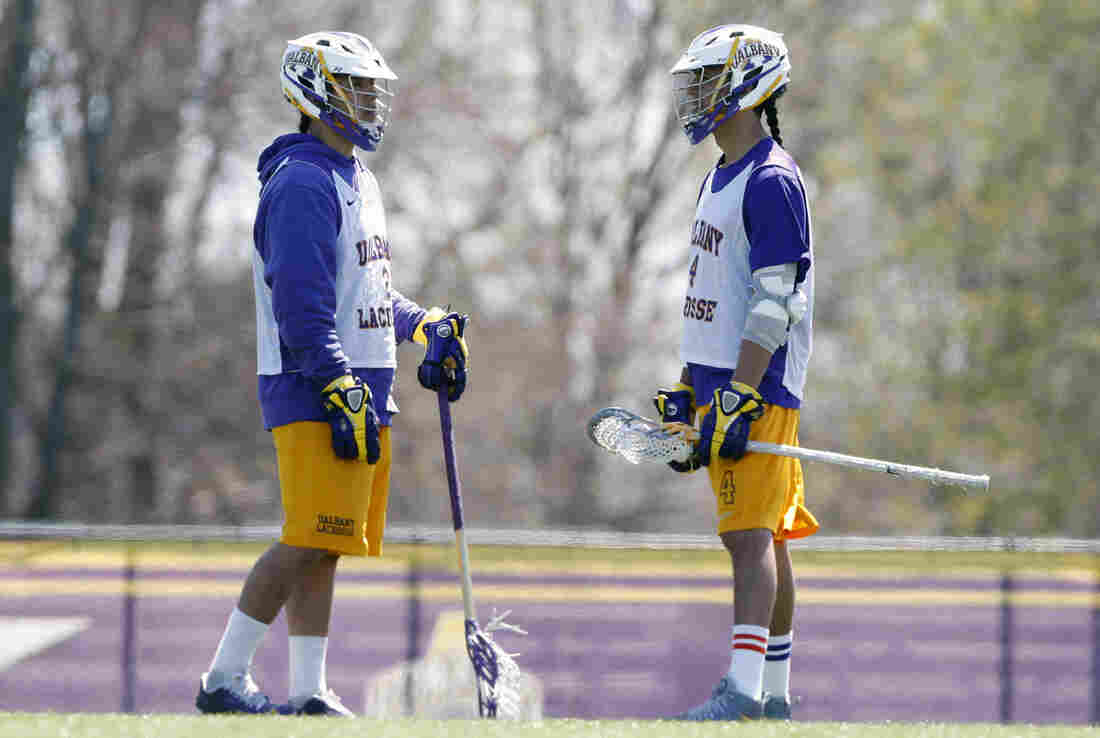 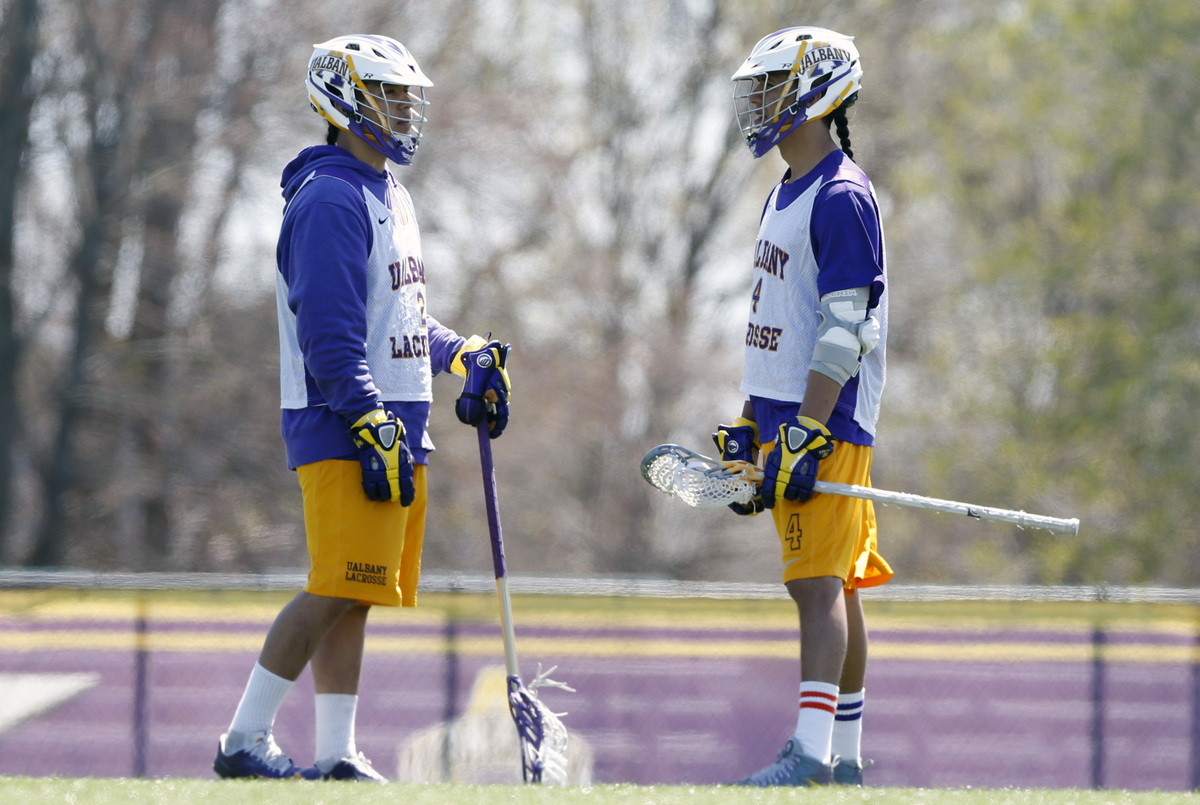 Miles Thompson (left) and his brother Lyle Thompson of New York are finalists for the Tewaaraton Award, college lacrosse's equivalent of the Heisman.

UPDATE: The Tewaaraton Award was given Thursday night to both Miles and Lyle Thompson. This is the first time the annual award has been given to more than one individual in the same category.

The Tewaaraton Award is college lacrosse's equivalent of the Heisman Trophy, given out each year to the sport's best male and female players.

This year, Miles and Lyle Thompson, brothers from the Onondaga Nation who are teammates at the University at Albany, State University of New York, are among the five men's finalists for the award. Miles led the nation in goals per game, and was second in overall points. The only player with more points this season was Lyle. Along with their cousin Ty Thompson, they fuel the highest-scoring offense in the sport, and if either of the Thompsons were to win it, he would be the first Native player to do so.

It's a juxtaposition that's hard to miss: Lacrosse was created by Native Americans; Tewaaraton is the Mohawk name for the sport.

"When you're born, you're given a wooden [lacrosse] stick, and it just goes to show that lacrosse is in our tradition," Miles told me. "Being Native American, everyone plays the game."

Miles told me that Lyle wants him to win the Tewaaraton. But if it were up to him, he said, the award would be Lyle's. "He just feels that I'm a senior, it's my last year of college, so it would be nice for me to win it," he said. "I feel like [Lyle] should have won it last year, hands down, because I feel like he's the best player in the country."

But their decision to play at the less-heralded Albany program could have lasting implications for college lacrosse as important as a history-making Tewaaraton win. Syracuse University is a traditional lacrosse power, and its edge with Native players has long been so pronounced that other colleges often felt it pointless to even try to go after them.

Both brothers were highly sought-after recruits; Lyle was ranked the No. 1 high school player in the country. But it was understood that the Thompsons were a package deal — whoever landed Miles would get Lyle, too. "We wanted to go somewhere where someone wanted me, and not just Lyle," Miles said.

Scott Marr, the men's lacrosse coach at Albany, said he knew the odds were against him at first. "Traditionally, most Natives who played the game and ended up going to college did go to Syracuse," he told me one day last month. "Like everyone else, we assumed they would go there."

Syracuse had some clear advantages in wooing the Thompsons. Their older brother, Jeremy, was a lacrosse standout for the Orangemen, who play in the Carrier Dome, just 20 minutes from the Onondaga Reservation. And Marr said that Syracuse's up-tempo, run-and-gun style is similar to the way the game is played on the rez.

But that is Albany's approach too, which is why Marr and his assistants were so keen on landing the Thompsons. "We were meant for each other, as far as our styles are concerned," Marr said.

The Albany coaches went to see the Thompsons play on the rez, and slowly started to build a relationship with them. It was during those visits that they saw how good — and how uncommonly close — Miles and Lyle were.

"The two of them are as close as twins as you could be without them being twins," Marr said. "Watching the two of them playing together, the fluency and the continuity that they play with is uncanny."

The three of them are among the top 10 players of the last several decades. Their stick skills in general are just at another level.

Their games took off at Albany, in part because they are near-perfect complements to each other. Lyle is the facilitator who creates for the other players on offense. (Marr compared him to Wayne Gretzky: "Lyle just has a different gear than anybody in the game today — his athleticism, his vision. He's a passer first, scorer second, but his scoring ability is higher than almost anyone's.") Miles plays that role a bit, but he's off the ball a lot as a shooter. Ty is a catch-and-shoot guy.

"The three of them are among the top 10 players of the last several decades," Marr said. "Their stick skills in general are just at another level. All three of them just possessed a different set of skills than most people, in a variety of ways."

But in choosing a different tack, the Thompsons might have changed the calculus for where the best Native players decide to play. Lyle said that three other Native players are committed to play at Albany next year.

Every year in the spring, the male members of the Onondaga Nation in upstate New York gather to perform a lacrosse game that sits at the nexus of sport and spirituality.

That match is called the medicine game. The people of the Onondaga Nation play it as a tribute to their creator, who they believe gave them the sport of lacrosse so that they could entertain him.

They play the medicine game with those traditional wooden sticks and break up the team into two sides. On one side are all the men who are parents, and on the other are the men who don't yet have children.

For the childless Miles, that means squaring off against his relatives. Lyle is married with two children, as is their brother Jeremy, the former Syracuse standout. Even in a place where lacrosse is central to the culture, the Thompsons might stand out for how seriously they take the game. When Miles and Lyle were young, their father pulled them out of youth lacrosse because he felt they were too undisciplined. "He felt that youth leagues didn't teach kids how to play, just let them run around and play," Lyle said.

Instead, he drilled the young boys individually for hours on their catching and shooting. They loved the game and their father's attention. ("He made the game fun for us," Lyle said. "And when you make it fun, it's a lot easier to get better at it.")

Miles said that their father hasn't missed a single game in his four years at Albany. Jeremy texts them after games to tell them what they need to fix. And their mother often critiques their performances after games; between her husband and her four lacrosse-playing sons, she's been around the game so long that she knows it.

Miles and Lyle are relearning the Mohawk language — they lost their ability to speak it when they started attending public school off the rez — and they use it around the house whenever they can. But they use it on the field too, where they shout directions at each other in Mohawk. ("Cut backdoor!")

They foreground their culture in the way they play, as part of their push to be high-profile examples to young Natives. As the Thompsons see it, too many who leave the rez for college never return, taking the skills and education they've earned away from the folks back home who need them. Here, too, the Thompsons want to carve out a new path:

"We want to teach the kids that they can go off, go to school, and come back to the reservation and learn our ways," Miles said.