Accessibility links
Ralph Ellison: No Longer The 'Invisible Man' 100 Years After His Birth : Code Switch Ellison's exploration of race and identity won the National Book Award in 1953 and has been called one of the best novels of the 20th century. 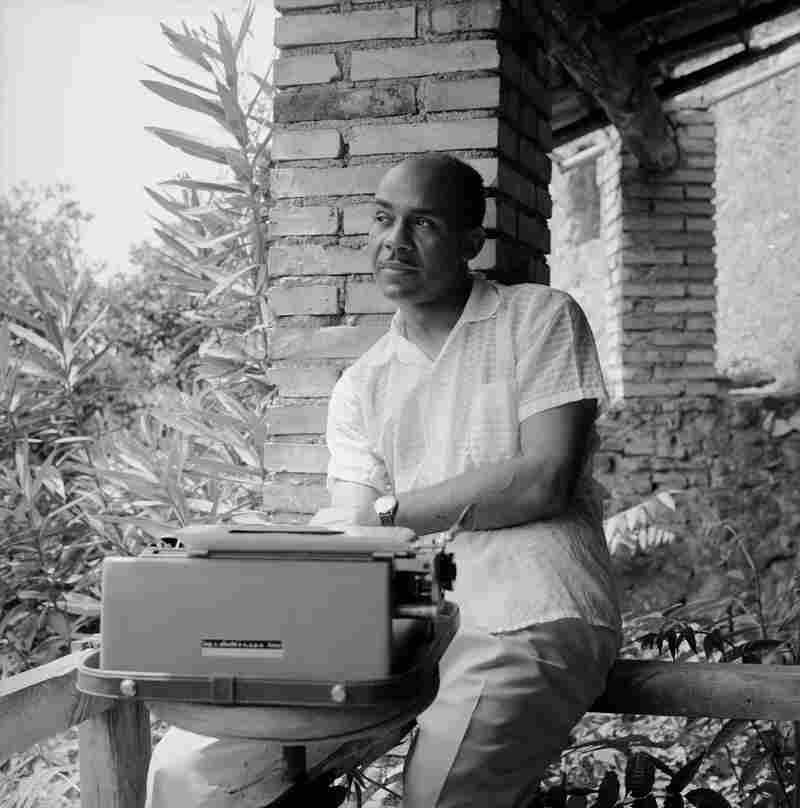 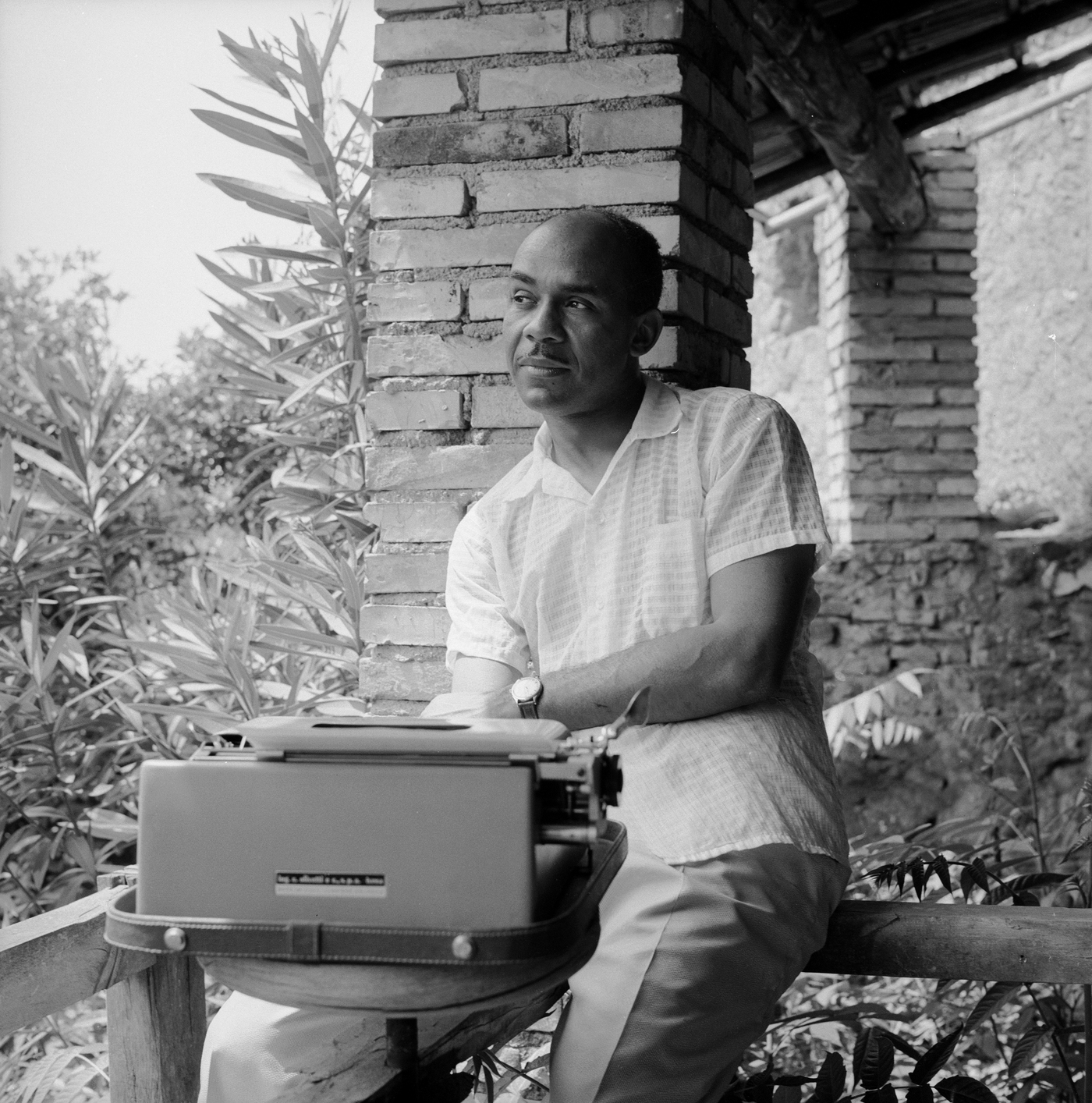 A monument outside 730 Riverside Drive in Harlem, N.Y. — writer Ralph Ellison's longtime home — commemorates his life and his work. The marker, and many biographical sources, list his birth date as being 1914. But in fact, he was born a year earlier.

Still, events in Oklahoma City — his birthplace — and New York City, where he spent most of his life, are celebrating the centennial of his birth this year.

Ellison's 1952 novel, Invisible Man, is a searing exploration of race and identity that won the National Book Award the following year and was named one of the 100 Best Novels of the 20th Century by Time magazine and The Modern Library.

Among the commemorations, the Schomburg Center for Black Research, where the novelist did some of his research for Invisible Man, presented a day of readings from the novel.

Seventeen-year-old Nelaja Muhammad read a scene in which the narrator — searching to find his place in a hostile society — buys a baked yam from a corner stand, and the aroma releases a Proustian flood of memories.

"I stopped, as though struck by a shot, deeply inhaling, remembering, my mind surging back, back. At home we baked them in hot coals of the fireplace; had carried them cold to school for lunch, munching them secretly, squeezing the sweet pulp from the soft peel as we hid from our teacher behind the largest book, The World's Biography."

Muhammad, a high school junior who lives in Harlem, says even though the book was written more than 60 years ago, its narrator endures the same challenges as African-Americans today.

"If he wants other people to believe that he's his own person, he has to believe in it himself," she says. "So I kind of relate to that, because everyone goes through struggles. Everyone goes through hardships. And at times, people give up on themselves. But that one moment where you realize that you are worth it. You have to be able to realize that you're not alone."

'A Course In History'

Ellison walked the streets of Harlem in 1938, interviewing people for a history of African-Americans for the Federal Writer's Project. In 1983, Ellison said that experience was essential in shaping the writer he became.

"Some of those interviews affirmed the stories that I had heard from my elders as I grew up," he said. "They gave me a much richer sense of what the culture was. I might say it was like taking a course in history."

The history of African-Americans in the first half of the 20th century provides the backdrop for his novel. The unnamed narrator grows up in the rural South; attends a prestigious black university; then travels north to Harlem, where he is first embraced, and then rejected by leftist intellectuals.

The novel's opening lines reflect themes that run throughout the story.

"I am an invisible man. No, I am not a spook like those who haunted Edgar Allan Poe; nor am I one of your Hollywood-movie ectoplasms. I am a man of substance, of flesh and bone, fiber and liquids — and I might even be said to possess a mind. I am invisible, understand, simply because people refuse to see me." 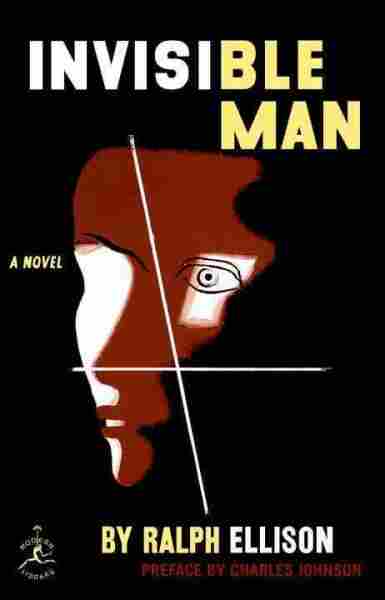 Ellison's treatment of race in the 1952 novel anticipated questions about the future of African-Americans that still resonate, says Khalil Gibran Muhammad, director of the Schomburg center and the great-grandson of the late Nation of Islam leader Elijah Muhammad.

"Whether we look at the invisibility of a Trayvon Martin, or the invisibility of a Magic Johnson in light of the most recent controversy over Don Sterling," Muhammad says, "or even the ways in which the contemporary art world for black visual artists turn on whether they have a responsibility to depict blackness through traditional narratives — are all themes that Ralph Ellison brought to his work."

Writing Out Of Experience

Ellison drew on his own struggles to create Invisible Man. He was born in Oklahoma City to Lewis and Ida Ellison, who named him Ralph Waldo Ellison after the 19th century American writer Emerson.

His father died at the age of 39 after an accident delivering ice to a grocery store. "The death of his father when he was 3 was the decisive event of his earlier life because it plunged his family into poverty," says Ellison biographer Arnold Rampersad. "And so he — although he had influential upstanding friends and patrons in his youth, he really was always aware that he ... had virtually nothing and was dependent on others."

Rampersad says Ellison spent the rest of his life trying to redress his impoverished beginnings. He became something of a Renaissance man — turning to sculpture, photography and music. He studied the cornet and then trumpet and piano.

In 1933, he attended the Tuskegee Institute in Alabama, intent on becoming a composer. Three years later he traveled to New York to earn money to pay his tuition. There he met writers Langston Hughes and Richard Wright.

Rampersad says Ellison started late as a writer: "He was 22 or so before Richard Wright turned to him one day and said, 'Why don't you try a short story?' And he worked very hard over a period of seven years to produce a masterpiece. And he succeeded."

Invisible Man was hailed as a landmark. But in 1983, Ellison said he wasn't writing only about the black experience in the novel.

"When I was a kid, I read the English novels. I read Russian translations and so on. And always, I was the hero. I identified with the hero," Ellison said. "Literature is integrated. And I'm not just talking about color, race. I'm talking about the power of literature to make us recognize again and again the wholeness of the human experience."

The novel ends this way:

"Being invisible and without substance, a disembodied voice, as it were, what else could I do? What else but try to tell you what was really happening when your eyes were looking through? And it is this which frightens me:

"Who knows but that, on the lower frequencies, I speak for you?"

After Invisible Man, Ellison spent the rest of his life working on a second novel. When he died from pancreatic cancer in 1994, he left behind 1,600 pages of an unfinished manuscript, which was eventually published under the title Juneteenth.