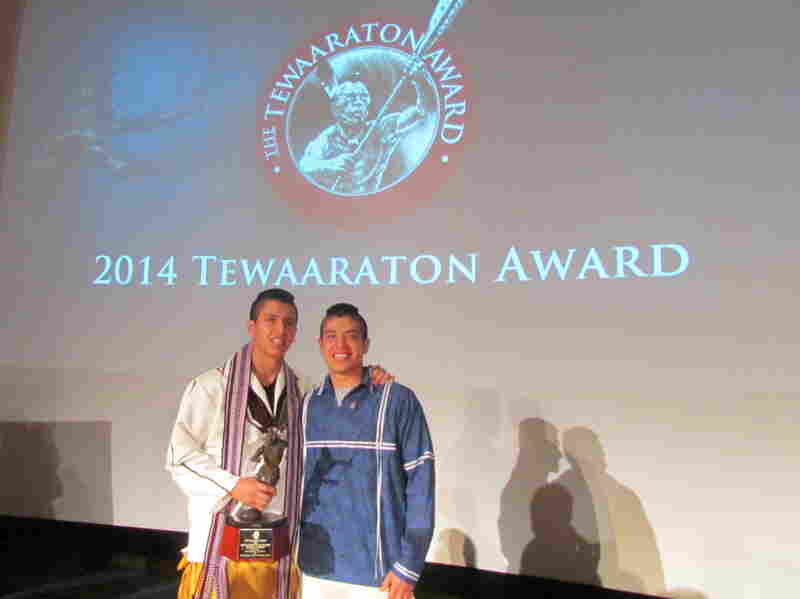 The Tewaaraton had never had shared winners before Thursday night. But the committee voted unanimously to give the award to both Lyle Thompson (left) and Miles Thompson, who both had record-breaking seasons. David Vatz/University of Albany Athletics hide caption 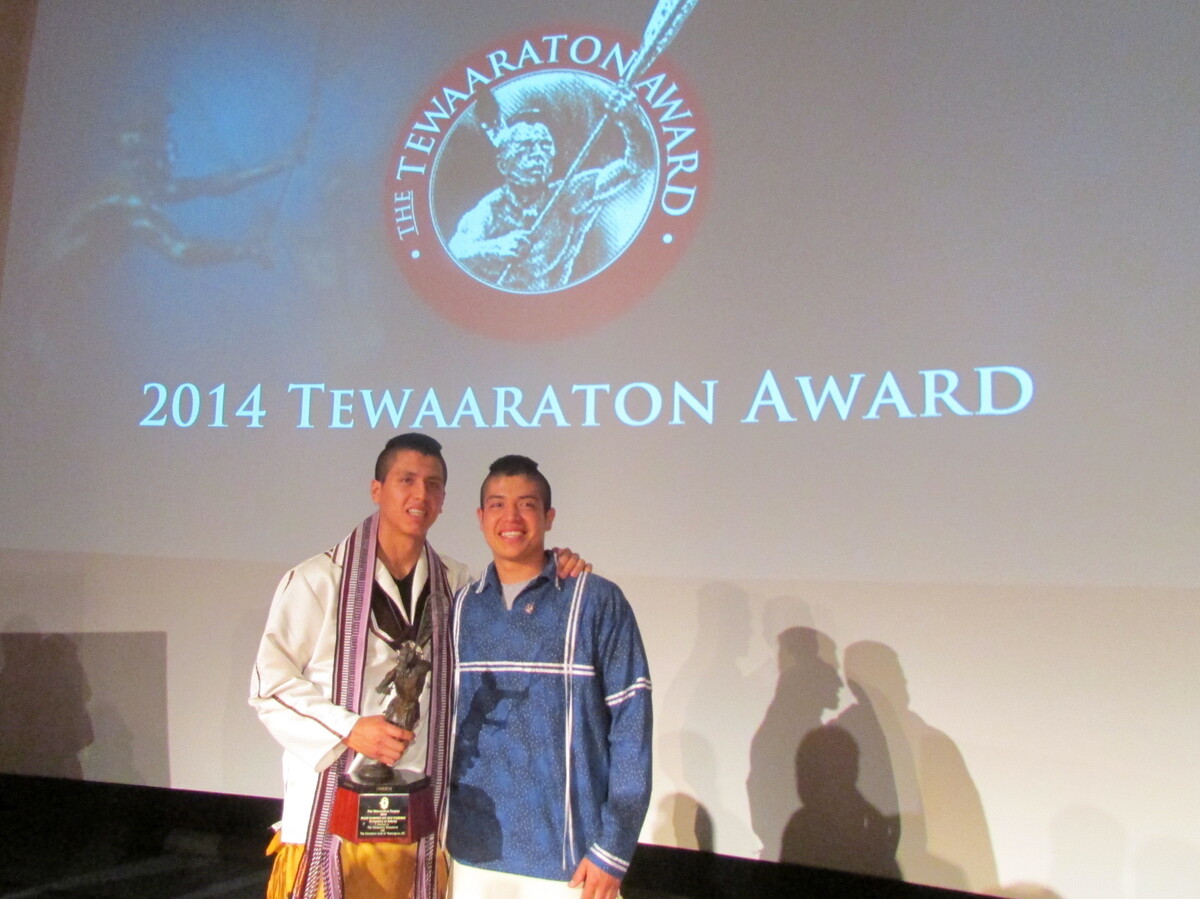 The Tewaaraton had never had shared winners before Thursday night. But the committee voted unanimously to give the award to both Lyle Thompson (left) and Miles Thompson, who both had record-breaking seasons.

The Tewaaraton Award is college lacrosse's equivalent of the Heisman Trophy, given to the best player in the country each year. The award takes its name from the Mohawk word for lacrosse, as a way to honor the sport's Native American origins. The bronze trophy depicts a Mohawk man with a lacrosse stick, surging forward.

But no Native player had ever won the award before Thursday night's ceremony at the National Museum of the American Indian in Washington, D.C. The Thompson brothers — Lyle and Miles, record-setting brothers who play at the University at Albany-SUNY — were among the five finalists this year. They are members of the Onondaga Nation, and if either of them won, it would have been a historic first. (We profiled the Thompsons earlier this week at Code Switch.)

When it came time to announce the winner, though, the presenters seemed surprised and stumbled. They announced Lyle's name, before pausing. "I don't think I've ever seen this before," one of the emcees said. After a few seconds of confusion, the presenters announced Miles' name, too.

Both Thompsons won this year — the first time the award has ever had co-winners.

The Thompsons wore their traditional dress and their distinctive braided ponytails. Lyle's voice shook as he accepted the award.

"I grew up and have been by his side my whole life," said Lyle, a junior who this year broke the decades-old Division I record for total points in a season. "It's just an honor to be out there with him ... and for this to happen."

Miles, who is in his final year at Albany, led the nation in goals per game and set the NCAA record for goals in a season.

"I grew up and have been by his side my whole life It's just an honor to be out there with him and for this to happen."

The Tewaaraton selection committee is made up of 10 active coaches. In a statement, the committee said that the decision to give the award to both Thompsons had to be unanimous, and it was.

The Thompsons made waves in the lacrosse world when they opted to go to play for the less-heralded Albany Great Danes instead of the Syracuse Orange, a traditional lacrosse power with a long history of recruiting Native players. One of those Syracuse players was their older brother, Jeremy.

Along with their cousin, Ty, another attacker at Albany-SUNY, the Thompsons fueled the highest-scoring offense in the U.S. this season. The brothers also became the first teammates in Division I history to simultaneously both record 100-point seasons at the same time.

Before the announcement, a video played highlights of each of the five finalists. But it was the Thompsons' clips — full of behind-the-back goals and crafty stickwork — that set off a wave of oohs and ahhs.

Back in April, their coach, Scott Marr, told me that the Thompsons, including Ty, were one of the best attack trios the game had ever seen. "I could coach another 25 years and not find another situation like this," he said.

He pointed specifically to their stick skills and athleticism, but also pointed to the brothers' uncommonly close bond. "The two of them are as close as twins as you could be without them being twins," he said.

Still can't believe I can share this award with my brother and my people. Breakfast back home w/ the fam #TBL pic.twitter.com/yD6APti9B4

"I really didn't see this coming," Lyle said at the podium. Then he gestured to his brother. "We've done everything together."

This morning, the Thompsons shared this photo of themselves eating breakfast with their family, with the Tewaaraton in the foreground.