Accessibility links
On The Trail Of Black Cowboys From Nat Love To Sheriff Bart : Code Switch At least one quarter of working cowboys during the height of the great cattle boom were black. Many had spent their childhood in slavery and headed west after the Civil War. 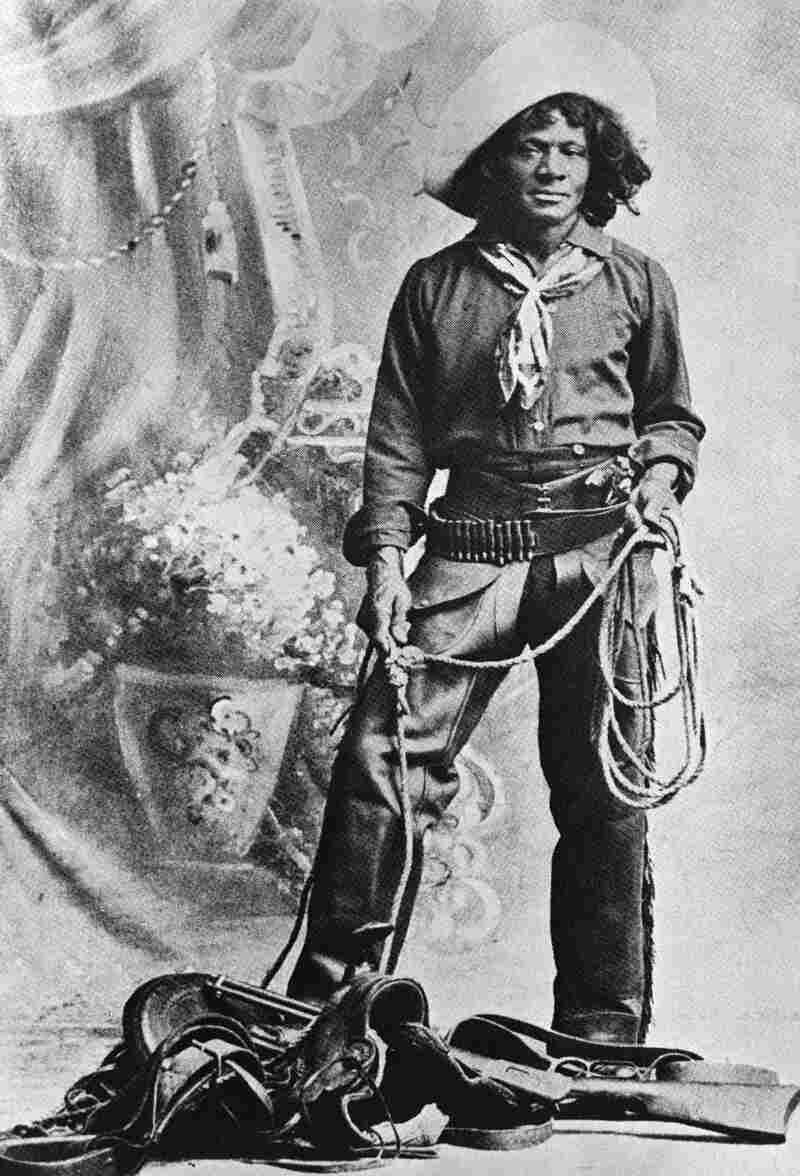 Nat Love, African American cowboy who claimed to have won the name of Deadwood Dick in South Dakota, 1876, by virtue of his roping talent. Full length photo with lariat and saddle. From his privately published autobiography (1907). Bettmann/Corbis hide caption 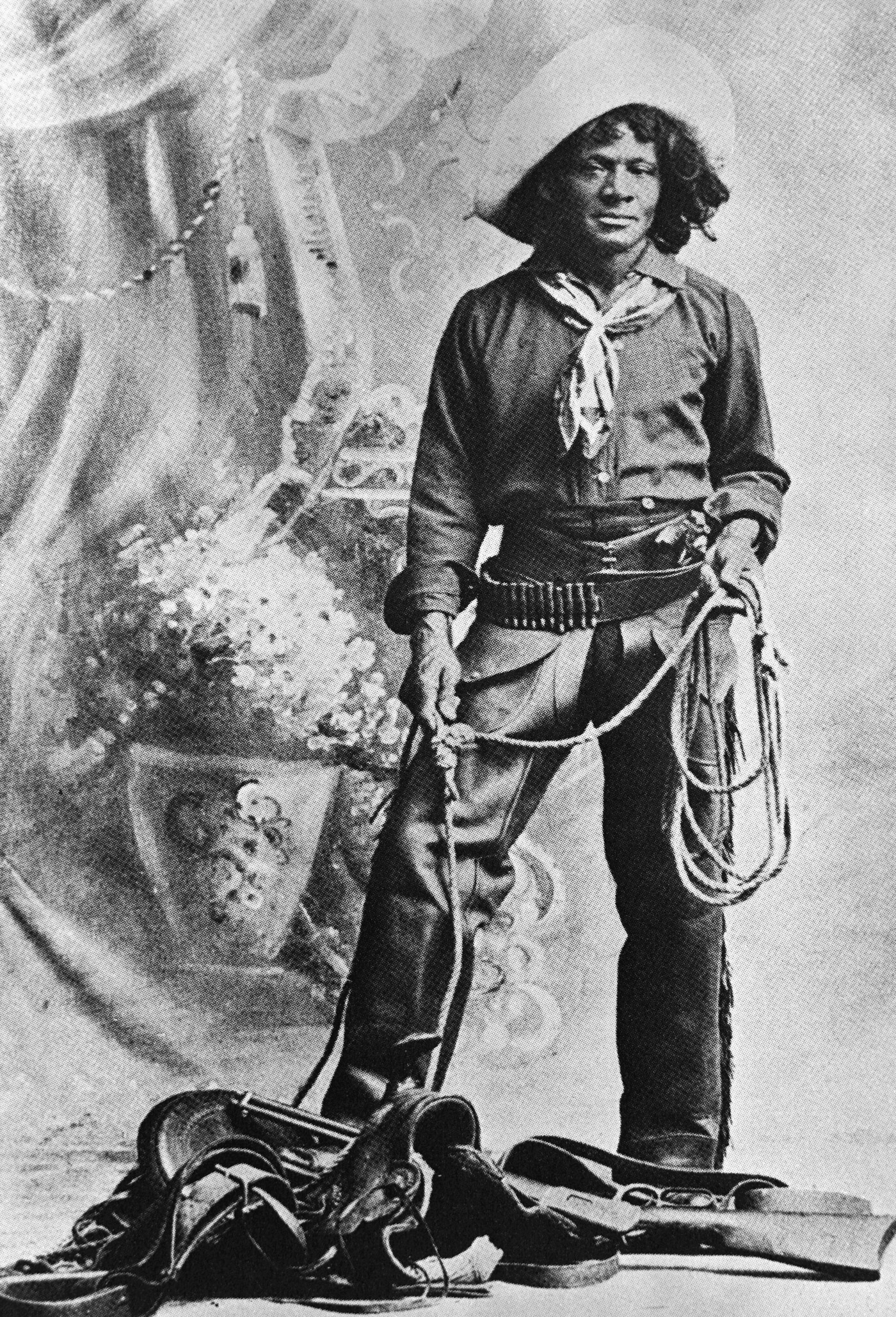 Nat Love, African American cowboy who claimed to have won the name of Deadwood Dick in South Dakota, 1876, by virtue of his roping talent. Full length photo with lariat and saddle. From his privately published autobiography (1907).

Nat Love spent Christmas morning burying close companions. A dispute among friends over a saddle horse had ended badly. And in a scene straight from the movies, Arizona Bob had drawn his revolver, but A. Jack's hands reacted just a split-second faster. When the smoke cleared, five horses and three men — A. Jack, Arizona Bob and Wild Horse Pete — lay dead in the corral. The year was 1872 and Love's party had stopped only for a few days in what today is Holbrook, Arizona.

Love recalled the fight in his memoir, The Life and Adventures of Nat Love. He wrote, "In those days on the great cattle ranges, there was no law but the law of might." John Wayne couldn't have growled words more tried and true.

Love was born a slave on a plantation in Tennessee, which was perhaps the only exception to a life that otherwise resembled the plot of a Hollywood Western.

At least one quarter of working cowboys during the height of the great cattle boom were black. Many had spent their childhood in slavery and headed west after the Civil War. Their history is often overlooked but they came back into public view this week with the death of the greatest star of black Westerns, Herb Jeffries (more on him later, first we'll return to Love).

Love's cowboy tales are imbued with a fond nostalgia and maybe more than a little myth-making. He earned the nickname "Deadwood Dick" after winning a rodeo in South Dakota. As he tells it, he could hit anything within range of his Colt .45 revolvers or Winchester Model rifle, but killed only out of self-defense. He was captured by Indians and narrowly escaped one dark, cloudy night on a stolen horse. He fell for a young "Spanish sweetheart" on a ride down in "Old Mexico." Billy the Kid, the infamous outlaw, once bought him a drink at a saloon in Anton Chico, New Mexico.

All of which calls to mind the famous line from The Man Who Shot Liberty Valance: "This is the West, sir. When legend becomes fact, print the legend."

Until the late 1950s, blacks were largely absent from white mainstream Westerns. The writers at Columbia Pictures may simply have been after a catchy name when they scripted the 1940 serial Deadwood Dick. Also, Love might not have been the original or sole source of the name's notoriety. Whatever the case, the B-list Western starred a Scottish actor as the hero.

In mainstream Westerns, black actors played mostly minor roles, with their characters often serving as the butt of jokes. Eugene Jackson was a child actor with a role in Cimarron (1931), which won several Academy Awards. His character is the object of ridicule when he arrives at church in ill-fitting clothes. The underlying message here: "blacks are out of place in the Wild West," says University of Maine professor Michael Johnson, who writes about this subject.

The decade before and after Cimarron saw the filming of Westerns with all-black casts that screened in all-black movie theaters. Actor and singer Herb Jeffries starred in a popular string all-black Westerns including Harlem on the Prairie (1937) and The Bronze Buckaroo (1939). These films were made relevant to black film goers by incorporating jazz, blues and references to the contemporary black culture of the day.

Furthermore, the films' black hero, played by Jeffries, was a master of disguise and a witty trickster. "Jeffries and other characters in these films are no longer reduced to serving as the objects of humor, so they become the agents of humor," Johnson says.

(The question of Jeffries' race, however, is a notable mystery: his mother was white, but sources differ on his father. At times Jeffries claimed his father was African-American, other times Sicilian, other times Ethiopian. Still, he identified as black during this era. Whether an opportunist, a realist, or just a mystery, he would later identify as white on the five marriage licenses he signed throughout his life.)

Beginning in the late 1950s and early 1960s, mainstream Westerns — motion pictures and, to a larger extent, television — begin to more earnestly depicting the black presence in the West. In The Man Who Shot Liberty Valance (1962) Woody Strode's character, Pompey, is a sidekick to John Wayne's Tom Doniphon. Pompey tosses Tom the rifle to shoot Valance at the film's climax. Pompey's role, while dignified, is still somewhat subservient. However, when Tom tries to kill himself by lighting his house on fire, it is Pompey who carries the iconic, masculine John Wayne — now unconscious and lifeless — out of the flames.

Also in 1962, Sammy Davis Jr. guest-starred in two episodes of The Rifleman. His is the only non-white face in the small, fictional town of North Fork. The townspeople, however, react favorably to his abilities with a gun and his storytelling. His race goes completely without mention. Unlike Pompey, whose blackness is openly an aspect of the drama, Sammy Davis Jr. rides his horse straight into a post-racial West.

This reconsideration of the black presence in the West goes beyond the realm of the Western. In the 1972 documentary, Black Rodeo, an all-black rodeo is held near Harlem, on Randall's Island Park. An enthralled group of spectators watches bull riders and bucking broncos. Muhammad Ali rides a horse down 125th Street and exchanges wisecracks with a few of the cowboys. Woody Strode narrates the documentary and concludes with a discussion of the long-ignored history of the black cowboy.

By far the most popular cinematic depiction of a black cowboy, however, is in Mel Brooks' Blazing Saddles (1974) (which is also a classic example of the interracial buddy movie). The film appeared after a series of Westerns starring black actors like Sidney Poitier and Harry Belafonte. In Blazing Saddles, Bart, the black sheriff, arrives on screen riding his horse with his gun, badge and cowboy hat while sporting Gucci saddle bags. Count Basie and his orchestra play right there in the desert as Bart rides past them.

Much like the Jeffries films, contemporary black culture is infused in this comic Western's plot. And it's made explicit throughout the film.

This scene from "Blazing Saddles" contains several racial slurs used to hilarious effect. Don't worry. It is all in the name of spoofing racism.

And, like Jeffries, Bart is also a master of disguise who uses his wits to trick his opponents with the "Welcome Sheriff" scene below being perhaps the funniest example.

Blazing Saddles is so joyfully over the top in so many different ways that it's easy to overlook its key message. Racism whether it be in the Wild West or anywhere else cries out to be ridiculed.