Accessibility links
When One Of New York's Glitterati Married A 'Quadroon' : Code Switch The 1924 marriage and separation of Leonard "Kip" Rhinelander, member of the New York glitterati, and Alice Jones became perhaps the most examined interracial relationship in our nation's history.

When One Of New York's Glitterati Married A 'Quadroon'

When One Of New York's Glitterati Married A 'Quadroon' 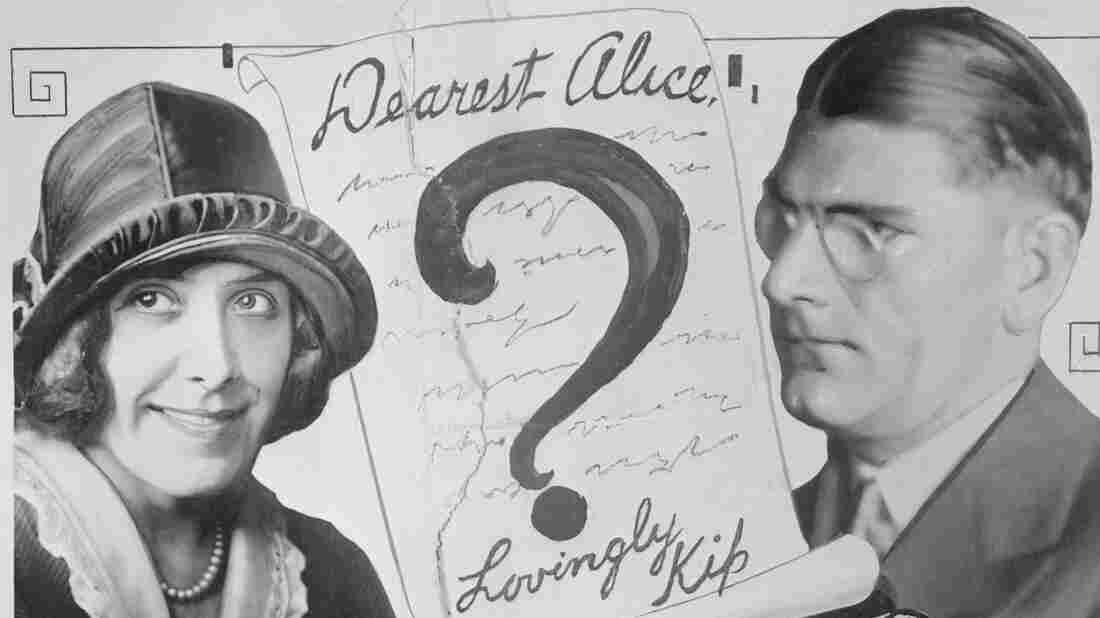 The love letters between Leonard Kip Rhinelander and Alice Jones were read to giggling spectators in the courtroom on Nov. 21, 1925. Bettmann/CORBIS hide caption 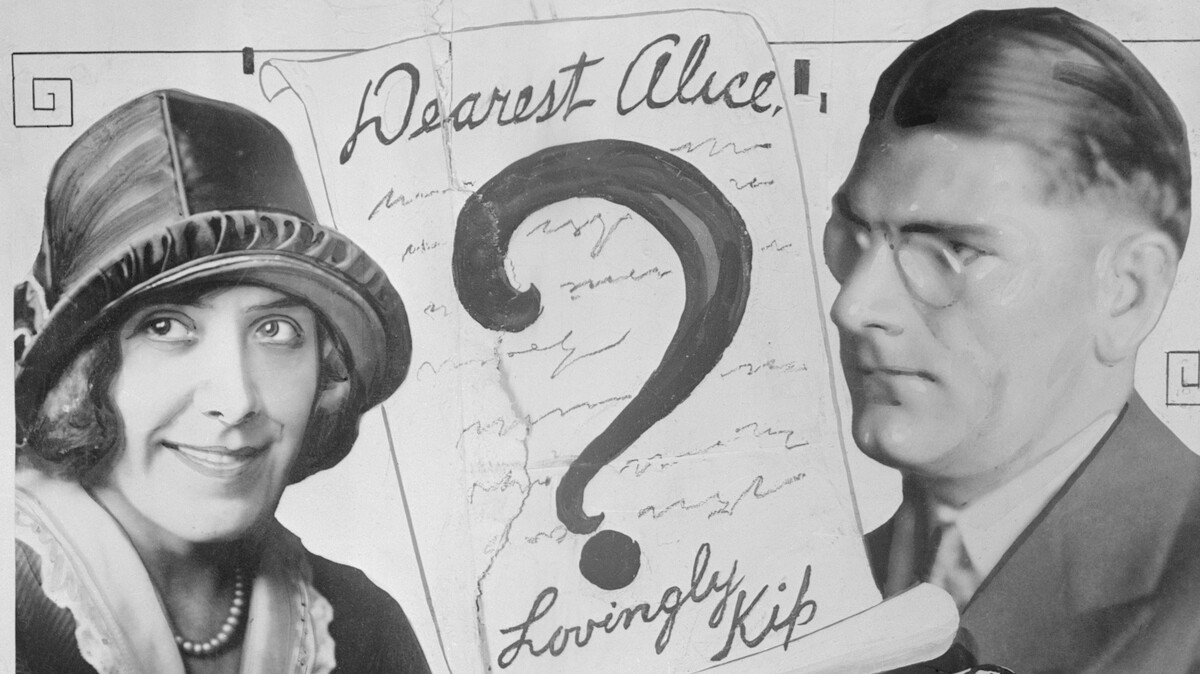 The love letters between Leonard Kip Rhinelander and Alice Jones were read to giggling spectators in the courtroom on Nov. 21, 1925.

Coverage of Kanye West and Kim Kardashian's recent nuptial ceremony was only remarkable in what most reporters left out: he's black, and she isn't.

The generalized lack of interest in Kanye and Kim's race stands in sharp contrast to the 1924 marriage and separation of Leonard "Kip" Rhinelander, son of the New York glitterati, and Alice Jones, a blue-collar woman with at least one black grandparent. Theirs became perhaps the most examined interracial relationship in our nation's history when Kip sued Alice for annulment on the grounds that she'd hid her "Negro blood" and intentionally deceived him into believing she was white.

The newspapers of the day alternatively called Alice a quadroon and octoroon. Quadroon was once used to describe someone who's one-fourth black. An octoroon was the offspring of a quadroon and a white person. (All this talk of quadroons and octoroons now feels more than a little offensive and silly.) Contemporary accounts vary as to whether Alice had one or two black grandparents. No matter the ratio of the mix, much of American society and statute adhered to the race standard colloquially called the "one-drop rule."

The Color Of Love

Kip, 18, and Alice, 22, met in 1921 and began a three-year courtship. Despite Rhinelander's powerful and wealthy New York family taking measures to end his relationship with Alice, the two rendezvoused, wrote hundreds of letters to one another, and then eloped in October 1924. The next month, the marriage was made public when The Standard-Star published a headline story titled "Rhinelanders' Son Marries the Daughter of a Colored Man." Kip's father immediately demanded he file for an annulment, and court proceedings began shortly thereafter.

The suit endeavored to prove Alice duped the stuttering, socially awkward, younger Kip and used sex to swindle her way into riches and high society. It was the celebrity nature of the Rhinelander family and the exposé of intimate marital details that turned the proceedings into a national spectacle.

To prove it was impossible to mask her race, the color of Alice Jones Rhinelander's nipples was examined by judge and jury as evidence of her blackness.

Kip testified that Alice told him her complexion was courtesy of Spanish ancestry. His lawyer attempted to show that all the dimwitted Kip wanted from Alice was sex and that he initially had no intentions of marrying her. To this end, hotel trysts were described in excruciating detail and sensual passages from Alice's love letters read aloud to show she was loose and licentious.

Concisely, Alice was painted as a gold-digging whore who tricked the weak Kip into an interracial marriage. His lawyer stated that Kip accepted "her less wealth, her poverty, [and] her inferior social position," but would not tolerate "the undying disgrace of an alliance with colored blood. That is where he drew the line."

Alice's defense was simple: She admitted to being colored and insisted that Kip was well aware of it. She did not take the stand, but testimony from family, friends, and acquaintances all confirmed this to be true. After getting Kip to confirm that he'd frequently seen his wife's nude body in sufficient light and that he continued to sleep with her after The Standard-Star reported she was colored. Alice's lawyer then pulled the incredible move of offering Alice's exposed body as evidence that her quadroon blood couldn't be hidden.

She was escorted into the bathroom where she removed all but her underwear and then slipped on a long coat. She began to weep. In one of the most outrageous courtroom scenes in American history, she was paraded into a closed room where judge and jury awaited her and told to show her legs up to the thigh. To prove it was impossible to mask her race, the color of Alice Jones Rhinelander's nipples was examined by judge and jury as evidence of her blackness. She was told to remove the coat and show her nude body from the waist up. She did, and she wept.

Finally, the ordeal complete, she was excused and she broke into an uncontrollable sob. Her mother helped her get dressed and physically supported her as they left the courthouse. The jury had seen enough.

At the trial's conclusion, the jury found in favor of Alice Jones Rhinelander and disallowed the annulment finding that no deception had taken place. Kip, now disowned by his family for dishonoring the name, eventually filed for divorce, and Alice counter-sued for alimony. When it was settled in 1930, Alice received a lump sum payment of $31,500 and a $3,600 annuity for life.

Kip and Alice never spoke or saw each other again. He moved out West and she moved back in with her parents.

Alice lived to be nearly 90 years old and received the agreed-upon $300 a month — never adjusted for inflation — up until her death in 1989, except for a short period in the 1940s, when the legality of the payments was challenged. She never married again and never had any children. She avoided the public eye and was a bit of a recluse. As part of the divorce settlement, Alice could not go public with her side of the story or attempt to make money through appearances. And the family was most adamant that she could never use the Rhinelander name for the rest of her life.

Kip, on other hand, only lived for six years after the divorce, dying in 1936 from lobar pneumonia.

Alice died of a heart attack brought on by a stroke. On her death certificate, the county identified her as Alice Jones, the legal name she kept her entire life to honor the divorce decree. In death, however, her tombstone read "Alice Rhinelander" — an engraved reminder of the persistence of love across the color line.