Accessibility links
Why 'Hispanic' Isn't a Race On the Census : Code Switch Lots of people who said they were Hispanic on the 2000 Census who changed their answer on the race question in 2010. There are lots of possible reasons: history, geography — even the questionnaire. 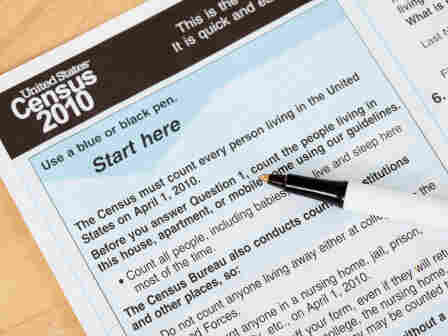 We've been talking a lot lately about how who fills out the Census in what way. It's an ongoing preoccupation of Code Switch, and one shared by Julie Dowling. Dowling, a University of Illinois sociologist, whose book, Mexican Americans and the Question of Race, came out earlier this year. (As the daughter of a Mexican-American mother and Irish-American father, Dowling knows all about the complexities of filling out the race question on the Census form.)

I interviewed Dowling about her research, and she shared some fascinating insights about the gap between how people fill in Census forms and how they think of themselves

On the history of 'Hispanic' on the Census Questionnaire

In 1930, "Mexican" was put on the Census [questionnaire] as a race. This was during the Depression and it was a time period when [the government was] rounding up people. They used the Census in the 1940s to locate Japanese-Americans for internment camps. So people didn't want to be identifiable on the Census because they were afraid of the government.

In 1929, the League of the United Latin American Citizens (LULAC), a Mexican-American organization, formed in Corpus Christi, TX. One of their main organizing efforts was to get "Mexican" off the 1930 census. They protested: we are white race, we are Americans.

The Mexican government itself protested the category, because the entire Southwest used to be part of Mexico, and when it was taken over by the United States, they promised Mexico that the Mexican residents there would be treated as full citizens. Well, at the time, you had to be white to be a citizen. So that's where the whole issue came about of Mexicans, specifically, identifying as legally white but socially not-white.

It worked against them in some ways, because they claimed segregation and discrimination, the parties being accused of discrimination could say, Well, no, you're white. So this history of claiming whiteness has been a strategy that Mexican Americans and other Latino groups have used to try to lobby for acceptance — claiming Americanness, claiming whiteness.

LULAC and the Mexican government successfully had "Mexican" removed from [the census questionnaire]. After 1930, there has never been another Latino group listed as a race on it. In 1970, the Hispanic origin question was first introduced on the Census long form, which is an extended questionnaire that goes out to about one in six households. And then, finally in 1980, the Hispanic identity question appears on all of the forms. It used to come after the race question. They later moved it before the race question because it was one of the most unanswered forms on the census. If you asked people their race, "I'm white or I'm black," and they would get this next question, "are you Hispanic?" They would say "I already answered this," and they would skip it. So that's why we have them the way they are and the way they're ordered.

And importantly, Latinos can be of a variety of racial backgrounds. People can be Afro-Latino and be white and be Latino and there are a whole lot of Latinos who are brown. So there's the issue of not wanting to be racialized, and there's the racial diversity of Latinos themselves.

On the Census considering including Hispanic as a race in 2020

The Census did this really big, comprehensive project where they sent out 17 different alternative questionnaires of the 2010 Census. And some of those were a combined question, where they actually put Hispanic or Latino in there, alongside racial groups. So they had more than 750 households involved in this, and they went back and they interviewed about one in six of those individuals who filled out that form. They got a telephone re-interview, where they got called back.

"You checked white for your race. Is that how you identify in your daily life? Is that how other people see you?"

They found that for Latinos, those who checked white did not identify with the term. So about half of Latinos who checked white on the Census, when they called them back, a very nominal amount of them thought of themselves as white. [The interviewers] asked them, "So why did you check this?" And they said, "Because there was nothing else. I don't fit anywhere else. There's nothing else to put. "

The combined question model doesn't actually call Latino a race. The question asks about a person's race or origin, so they just put them together. It has white and black and it has an option for Hispanic or Latino origin, and it says "check all that apply." And that's an important component because for some people it's a race and for others it may be an origin. Somebody may think of themselves as racially black and ethnically Hispanic. This gives them the option so they can mark, "I am black and I am Hispanic." If they feel like Hispanic/Latino is their sole identification in those categories, they can just mark that.

What I've found in my research is that in Texas, two-thirds of the Latino population checks white. And if you look at where they check white, all along the U.S.-Mexico border, 80 to 90 percent of them are checking white. These are areas where there's a lot of Spanish language maintenance, there are high immigrant populations, and in many of these populations there are a lot of low-income people. When you look at the national data for who checks white and who checks "other," you see people who check white are a little higher income, a little higher educated, perhaps less likely to speak Spanish. That's what Sonya Tafoya found in her Pew Report called Shades Of Belonging. What I looked at and found in Texas was that it was actually the lowest-income group that was most likely to check white. And that people who checked white were as likely to speak Spanish as those who checked "other race."

And so I looked at is as measure of ideology: those people who checked white were more identified with this ideology of using whiteness as a strategy, while those who checked other were more identified with anti-racist politics, or they identified more or with immigrants with African-Americans. So it wasn't so much color or assimilation, but what strategy they use to combat the discrimination they faced. Because the overwhelming majority of the people I spoke to experienced discrimination — whether they identified as white or whether they identified as other. Some of the lightest people checked other and some of the darkest people checked white. It wasn't a skin color issue or an assimilation issue: It's a strategic issue.

The Definition of 'Hispanic' And 'Latino' Varies By Region

In Texas, the term that's most commonly used is not Latino, it's Hispanic. When I interviewed people, and asked "Who is Hispanic?" the most common response that I got was: "It's someone of Mexican origin who was born here." And part of that is the overwhelming majority of [Latinos in] the state are people of Mexican origin, so they use that term.

There's a number of individuals who [identify as Hispanic but don't specify a national origin] — in the 2000 Census it was 17 percent, in the most recent 2010 Census it was 8 percent. They just check Hispanic on the questionnaire. And a lot of those individuals live in Texas and New Mexico. And they are telling the Census that they're Hispanic, but to them that means, "I'm Mexican and I'm born here."

A Whole Lot of 'Other' People

"Some other race" is now the third largest racial group after white and black — black, white and other. Come 2020, the way the demographics are shifting, it would become the second-largest race in this country. This isn't the '50s anymore. We don't live in — and we never have lived, frankly — in a black/white/other world. There are lots of groups here and we deserve recognition, and to be included.There's a lot of fear out there about what this means, and a lot of it is sort of people not understanding that they're not trying to homogenize Latinos into one racial category. It's about giving people more options, not less options, to identify themselves.