Accessibility links
Let The Commercials Explain World Cup Passion : Code Switch How do you convey the enthusiasm and the all-consuming madness that comes with being a soccer fan during the World Cup? Well, the best way to answer that question might involve watching a few ads. 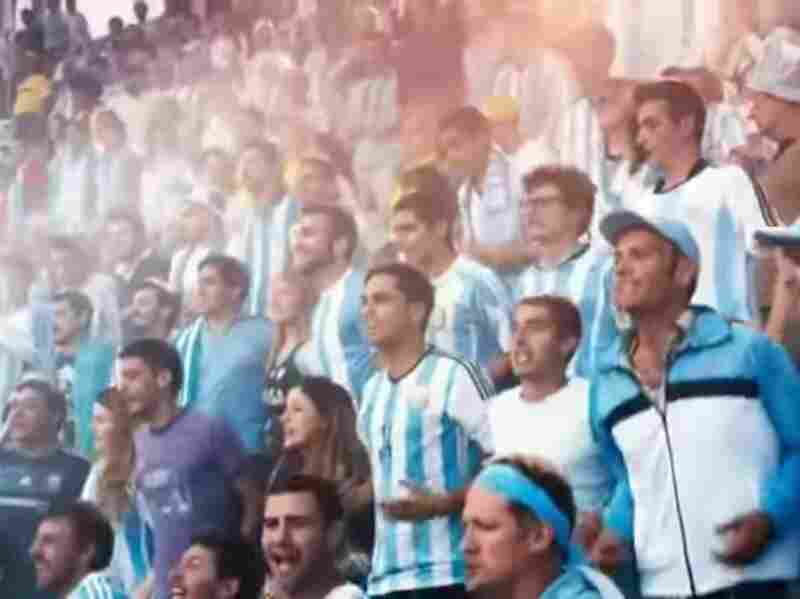 If you want to understand World Cup passion, looking at ads — like this Coca-Cola commercial in Argentina — might give you the best idea. YouTube hide caption 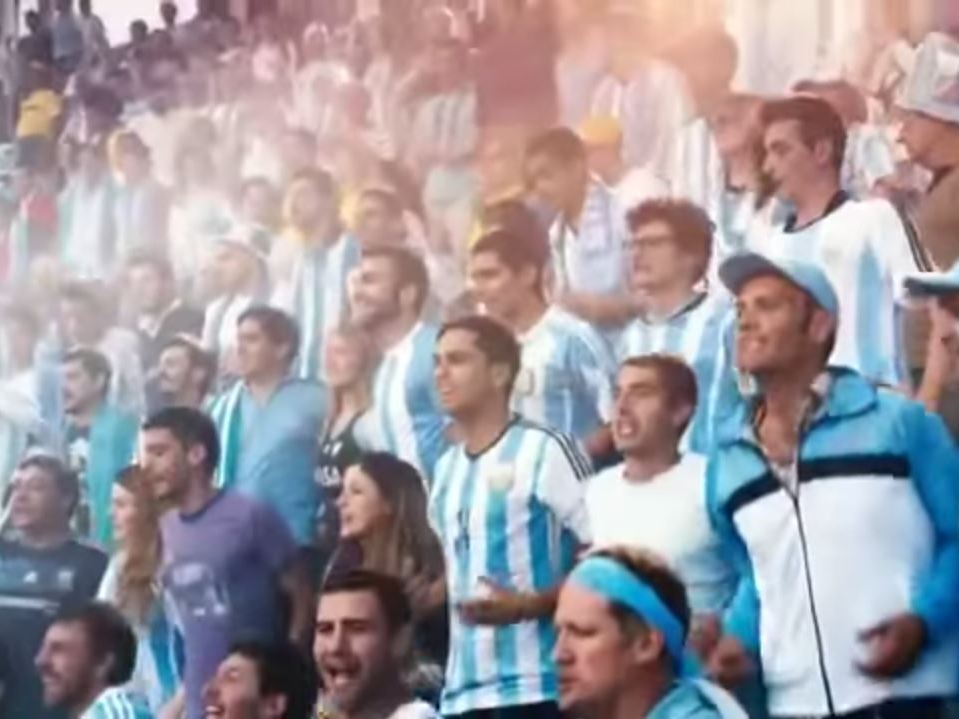 If you want to understand World Cup passion, looking at ads — like this Coca-Cola commercial in Argentina — might give you the best idea.

Every four years I am charged with explaining the inexplicable. As an immigrant and a soccer fan in the United States, I am asked to convey the cultural, political and social importance of the beautiful game.

By now, I and others like me carry around a bag full of analogies:

"It's like the Super Bowl. Every day. For a whole month. For the whole world. Except the U.S."

"If your country is playing, then everything stops. No school, no traffic, no work. There's absolute silence on the streets."

"Have you heard the story about the suicides and the heart attacks after the Maracanazo?"

For those of us who suffered the national disgrace of being denied a World Cup berth because of a goalie's self-inflicted wound (literal, not figurative), well, let's just say all the verbal analogies fall short. Unless you grew up with the game or lived abroad in a soccer-crazed nation, nothing I can say will fully convey the super-sized combination of passion and nationalist pride that the World Cup generates. (I am not kidding about nationalist pride. Consider how Colombia's national coach got "more than 400,000 write-in votes in Sunday's presidential election" after securing the country's first World Cup victory in 16 years.)

Better instead to show you what I mean.

And because Hollywood hasn't stepped up with a great soccer movie yet, the quickest way to explain the cultural importance of the World Cup may be to share some of the commercials made for the event.

In Chile, the advertising agency for one of the country's banks decided to cheer on its national team by featuring the miners who were rescued after spending 70 days trapped deep below the Atacama Desert.

No doubt much of the sentiment in this ad will be lost in translation, but the rising voice and stirring music should provide the emotional cues.

Chilean Miners Rally To Beat The Odds Again, At The World Cup

In this place, we were trapped underground for 70 days. The earth had swallowed us up. It was there that we had to prove what we were made of. We knew that there were millions of Chileans that believed in us. This dirt was a witness to all of that. And that's why we will take this sand to the stadium in Brazil and give it to the national team to fill the players with hope and bravery. In order to show the world that for a Chilean nothing is impossible.

Will Spain be difficult? Holland difficult? We are not scared by the Group of Death. We don't care about death because death didn't defeat us before.

Bank Of Chile, official sponsor of the national team

Sure, it's manipulative and populist (not to mention, the commercial completely skips over the less-than-inspiring lives these men have lived since their rescue), and it sneakily promotes the image of a bank along the way. And yes, the analogy of the miners who "defeated death" trying to assure their compatriots assurance that Chileans can come out alive of this World Cup's "Group of Death" has all the subtlety of a Zidane headbutt. But still, something about the commercial gives you goose bumps even if you're not Chilean. (And if you didn't get goose bumps, then this Dutch parody of the Chilean ad may be more to your liking.)

But in spite of the viral success of that commercial, the maestros of the World Cup tearjerker commercial are not Chileans but their neighbors, two-time World Cup champions Argentina. Tournament after tournament, they produce some of the most emotive and heartbeat-accelerating soccer ads in the world. And the ads are typically manipulative and heavy-handed, but the emotional impact is undeniable.

No ad produced this year has the brilliance of "Argentinos" — a perfect blend of cultural discourse, soccer myth and national self-aggrandizement — but this year's commercial featuring "their" pope comes close.

And just to stay with Argentina, take a look at this beer commercial in which the South Americans turn the life stories of a few of their stars into epic tales, while not-so-modestly claiming to "have invented something better than football; the love of football."

We have waited a long time. And our opponents should know what they will encounter on the field when we meet.

They will encounter a country that can't sleep because of this dream.

They will encounter a player who took thousands of injections in order to grow tall enough to compete in this World Cup.

They will encounter someone who brings with him the sacred fire of being raised in a charcoal shop.

They will encounter a player who was born in France and told the French, No, Thanks. Merci beaucoup.

They will encounter a man who is looking at the last chance of his life to win a World Cup and knows it.

They will encounter a man who was won two Golden Balls and wears them well.

They are going to encounter a people who invented something better than football; the love of football.

They are going to encounter a country that doesn't care how many tickets they have been allotted. Because once when they let in just one fan even that will prove to be too much.

All that they will encounter when we meet on the field.

Need further proof of Argentinean's masterful command of the World Cup tearjerker? Try this Coca-Cola commercial that makes a 100-second analogy between every possible milestone in the average human's life and ... what else? A match of Argentina's national team.

Life is a lot like a match of Argentina's national team.

We step on to the field and are enveloped in pure love.
We wear our last name.
We drink from the bottle.
We scream like crazy.
And we don't stay still for a moment.

The first 15 are pure emotion and optimism.
We want to conquer the world.
We get close to 30 and we realize that you have to take chances.
And take advantage of the opportunities.
We want to arrive at 45 in good shape and enjoy the break.

The second half is when we make changes.
We have a better sense of how best to play.
When to indulge and when to clench our teeth
And when we all have to move in the same direction to achieve our dreams.

In the last 15 we watch the clock.
Our legs are not the same but our heart remains unchanged.

Because in life, as in an Argentine match, you can win or lose.
But the most important thing is to leave everything on the field.

(The huge banner at the end reads, "Argentina, you are my life.")

But the U.S. is starting to catch up when it comes to the passion for soccer and mixing passion with national pride — even if it's still more of an underground feeling, a code among those in the know. ESPN produced a rousing ad that revolves around U.S. fan association, the American Outlaws.

Is the ad great? Yes. Is it as good as the Argentine commercials? Not quite. But just like in their defeat of Ghana, the Americans are starting to move in the right direction. Getting to the level of the world's soccer powers is just a matter of time.

So the next time someone asks you to explain why so many people across the planet are obsessed with the World Cup, well, you might just choose pull out your cellphone and let the commercials do the talking for you.