Accessibility links
Latinos Pledge Allegiance To More Than One Soccer Team : Code Switch For many Hispanics, cheering on Team USA and a Latin American team is a win-win. Univision taps into this double patriotism by referring to the U.S. team as "el equipo de todos" — everybody's team.

Latinos Pledge Allegiance To More Than One Soccer Team

Latinos Pledge Allegiance To More Than One Soccer Team 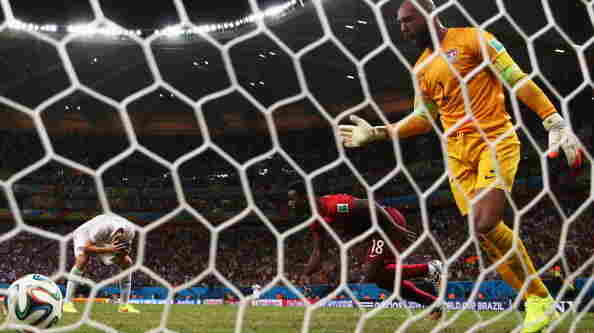 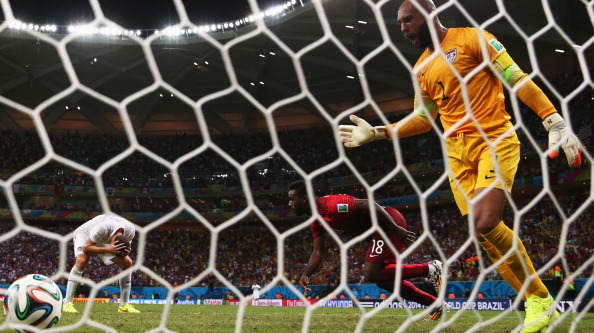 I would never have imagined that my immigrant mom, a Spanish teacher, a proud mexicana, would be cheering for Team USA in the World Cup. A few days ago I overheard her talking to my tía on the phone. She told her sister, "Isn't it great that the American team is playing so well? Now we have two teams to root for!"

Until then, I didn't realize cheering for two teams was an option. As a Latina living in the U.S., deciding whom to root for was like answering the question "where are you really from?"

A commercial for McDonald's showcases what it's like to be in a split family:

At the start of the World Cup, I was a die-hard Mexico supporter. Two weeks into the 2014 tournament, I feel strangely patriotic about American soccer.

In the 2006 and 2010 tournaments, I thought of the U.S. team as an opening act and nothing else. They just weren't fun to root for. Even when they performed relatively well, my American friends hardly seemed to care. In the eyes of a Mexican immigrant, American fútbol fever was disappointingly lukewarm.

When people say soccer is a religion in Mexico, they're not kidding. If you don't have an opinion about the state of El Trí, I guarantee that you won't have anything to talk about for the whole month. Office managers have started throwing World Cup viewing parties in break rooms because they know that if they don't, everyone will just call in sick anyway. This year, Mexican senators proposed holding off any legislation until after the tournament. Soccer is our special kind of government shutdown. 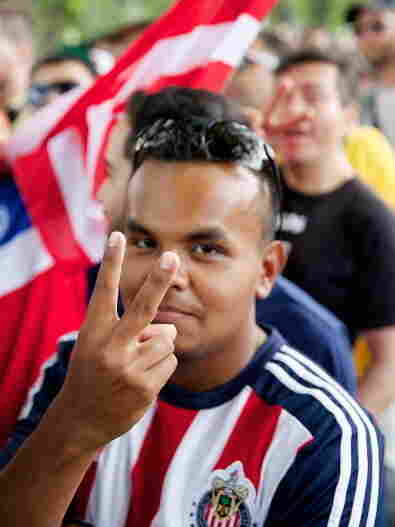 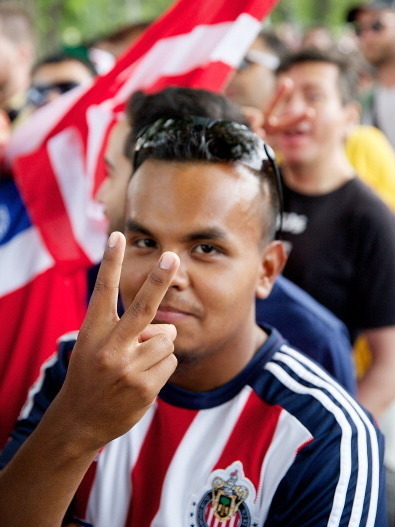 A soccer fan watches the U.S. vs. Portugal match in Chicago.

I believe that history will remember 2014 as the year the United States finally started caring about soccer. I was impressed during the first tournament win against Ghana, but I was hesitant to watch the next game. I was certain that Portugal would knock Team USA out of contention, but I was happy that my American friends were following the game, along with 25 million other Americans. As the game progressed, I tensed up into a tight little ball, stress-eating tortilla chips on the couch. After his first mistake, keeper Tim Howard made save after incredible save. Before the referee called overtime, it looked like Team USA was going to escape the "Group of Death."

And then, the heartbreaking last minute. That the American team had just broken my heart meant that my allegiance was truly split down the middle. What did this mean about my Mexican-ness? Could I be a part of la raza and cheer for both teams?

I retreated to my bed, scrolling Twitter for other people's reactions to understand what had just happened. Everybody in my network was in a state of total disbelief. It's that kind of emotion that makes me love soccer, no matter how it makes me feel.

My mom's enthusiasm for the American team makes me think my die-hard Mexico approach has been all wrong. She cheers for whomever she wants to win without worrying about the identity politics. Then again, she has a much simpler answer to "but where are you really from?"

There's no Latino/Chicano/Tejano/Immigrant team for me to identify with, so who am I really for? It's a question that I've been asking since my family moved to this country in 1996. Back then, I told everyone that one day I would plant the Mexican flag on the moon, but before that, I was going to represent the U.S. as an Olympic rhythmic gymnast. By the 2012 Olympics, I found myself identifying with the independent athletes, competing without a country's flag.

I asked the Latinos in my network whom they're cheering for, and the results were pretty mixed. Some root for their family's country; others just cheer for Team USA because they feel completely American.

Many of them unapologetically cheer for both teams, and they're the happy majority. Univision is tapping into this double patriotism by referring to the U.S. team as "el equipo de todos" — everybody's team.

Whether their roots are Mexican, Colombian or Chilean, when a Latino chooses to be a Team USA supporter, the chance of "my team" winning goes up 100 percent. And by alternating between two different jerseys, two different patrias, they're saying, I'm from here AND I'm from there.

Brenda Salinas is a radio producer and writer living in Houston, Texas. She was an NPR Kroc Fellow and a producer on NPR's Latino USA.