Accessibility links
The Elusive Dave Chappelle Re-Emerges, But For How Long? : Code Switch The comedy superstar has been headlining a series of sold-out shows at Radio City Music Hall. His routine was a reminder of a singular perspective on race that vanished when he went on hiatus.

The Elusive Dave Chappelle Re-Emerges, But For How Long?

The Elusive Dave Chappelle Re-Emerges, But For How Long? 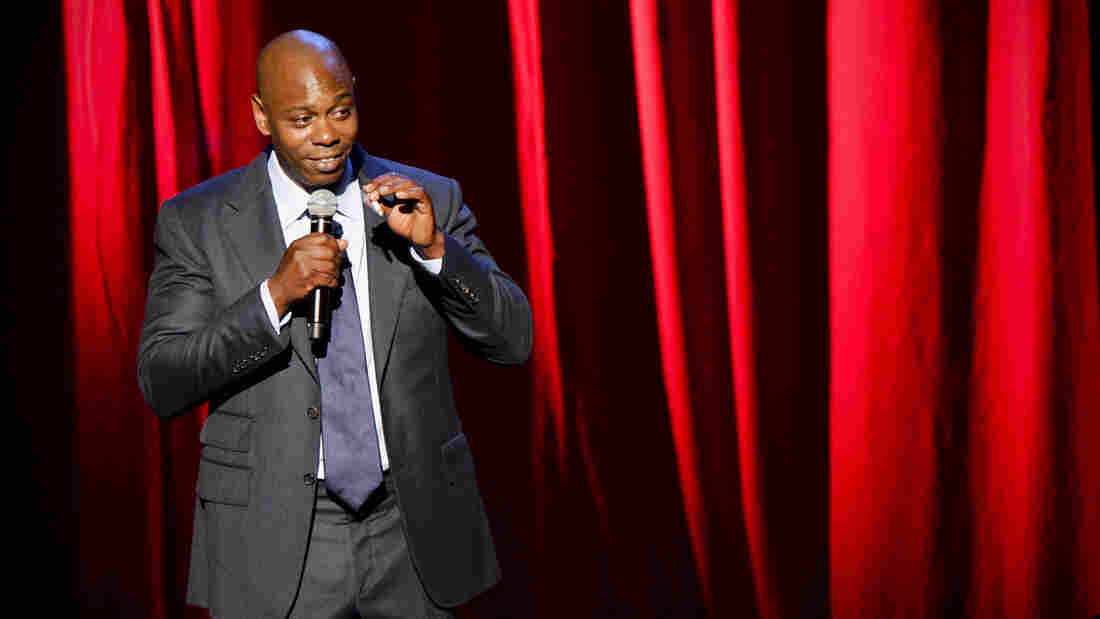 Chappelle alluded to his decision to walk away from his hit Comedy Central show only obliquely. Mike Coppola/Getty Images hide caption 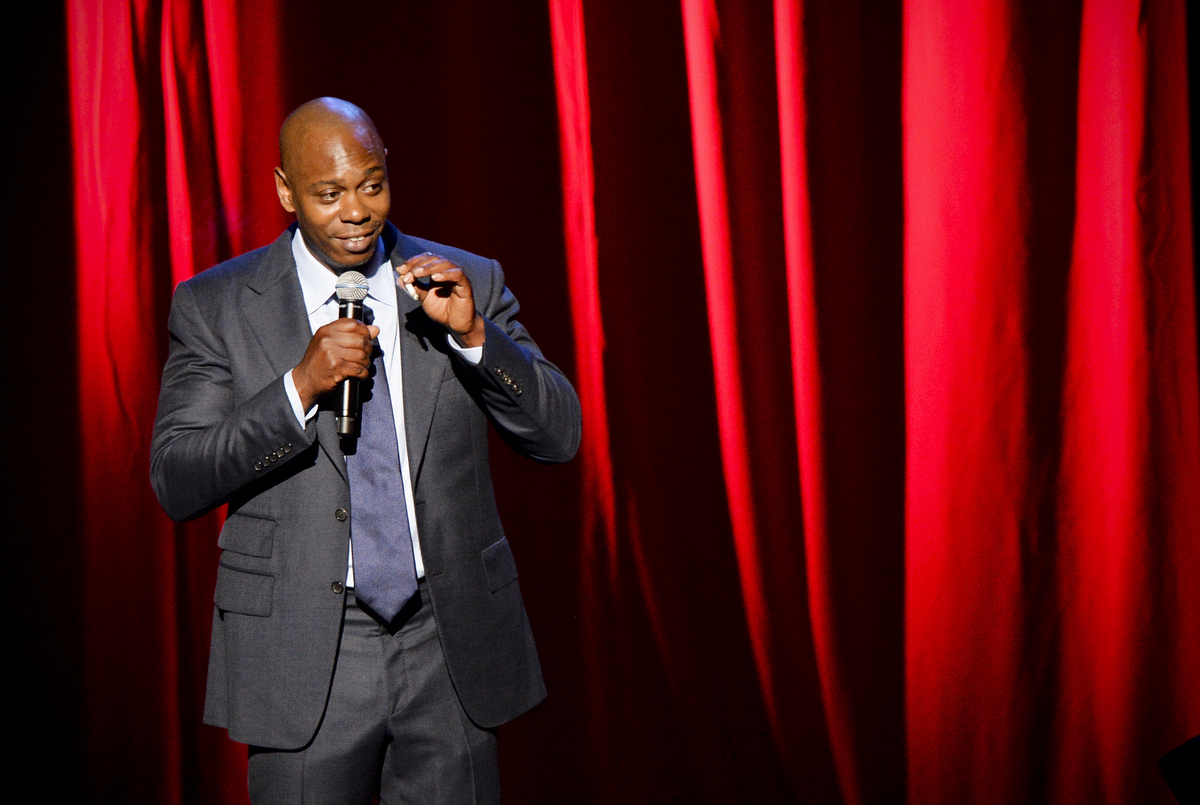 Chappelle alluded to his decision to walk away from his hit Comedy Central show only obliquely.

Just before Dave Chappelle took the stage Monday as part of a sold-out series of shows at Radio City Music Hall, a song featuring a loop of LL Cool J's famous opening line from "Mama Said Knock You Out" blasted over the sound system.

Don't call it a comeback!

You could take it as a suggestion that Chappelle had never really gone anywhere. Or you could read it as a coy reminder that none of us should get too comfortable, because Chappelle might bounce again at any moment.

He stepped onto the stage wearing a black suit, taking drags from a cigarette and looking much more muscular than the lanky dude that most of us remember from the days he walked away from his insanely popular show on Comedy Central and a reported $50 million TV deal. He said he hasn't been doing much during his time off, and said that there are details of some of his activities that he's not permitted to discuss. "Like the Illuminati Christmas party," he said.

Listening to his hourlong set, it was hard not to wonder about how Chappelle would have weighed in on the constellation of racial controversies and developments that have dotted our popular culture over the eight years that he's been mostly off the radar. When he walked away from his show at the height of his fame, Chappelle had probably become America's most influential commentator on race — riffing on its absurdity and fluidity and consequence. His odd sensibility — thoughtful, irreverent and scatological all at once — is hard to replicate.

Not long into his set, he recaps a fictional phone conversation he had with Paula Deen, in the aftermath of her racial controversy last summer. He toggles between the two of them, imitating Deen's famous twang. She thinks he's calling to offer her support after he tells her he's also said lots of impolitic things that could get him in trouble. After she thanks him for his support, he tells her that's not why he's calling: He knows that she's unemployed and he's in search of a good cook. Then he quickly ratchets up the absurdity, adding a typically warped, Chappellian twist that I won't do justice. Suffice it to say, it involves a profane Deen dressed up like Aunt Jemima and kicking through a door, hurling racist invective at Chappelle's family as she serves them delicious Southern cuisine for dinner.

The guy who once imagined a black President Bush making the case for invading Iraq had been publicly quiet for almost the entire administration of the first black president, for most of peak Kanye. He went radio silent for his own complicated reasons, but damn it if we didn't miss out on some transcendent comedy in the meantime.

During that self-imposed exile, a bunch of writers went searching the country for the elusive Chappelle like he was some sort of hilarious cryptid. Fans wanted to know how Chappelle — whom many thought of as a personal friend — could have ultimately been so opaque to them. How did they not know him? What made him tick? And, you know, how'd he walk away from all that damn loot? 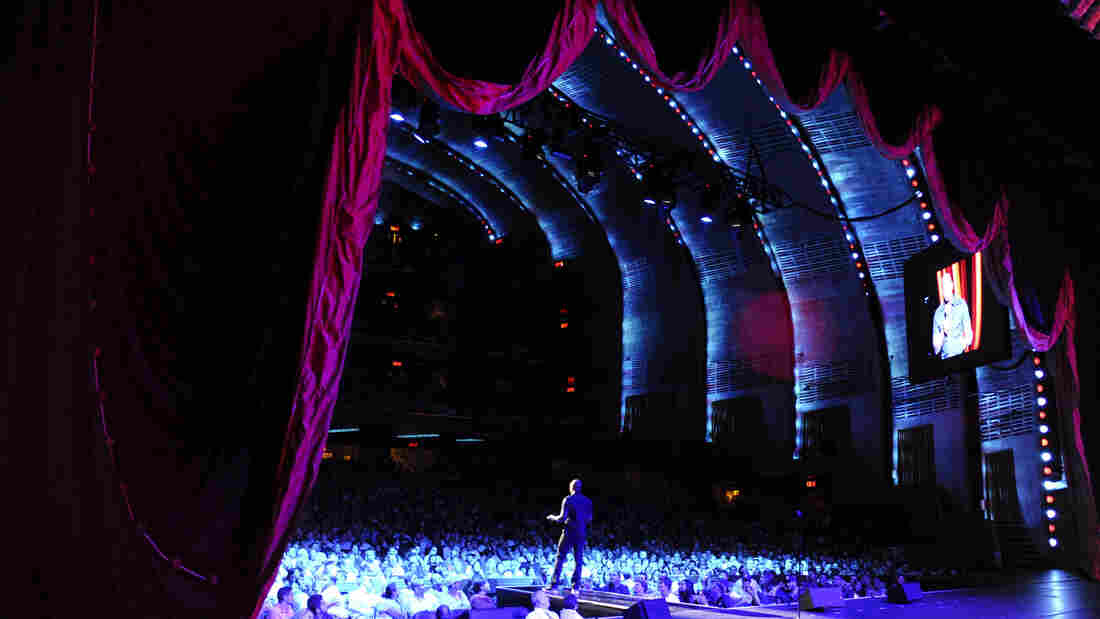 Chappelle said he hadn't been doing much in his time away from the spotlight, and that he wasn't allowed to go into detail about other activities, "like [attending] the Illuminati Christmas party." Kevin Mazur/WireImage/Getty Images hide caption 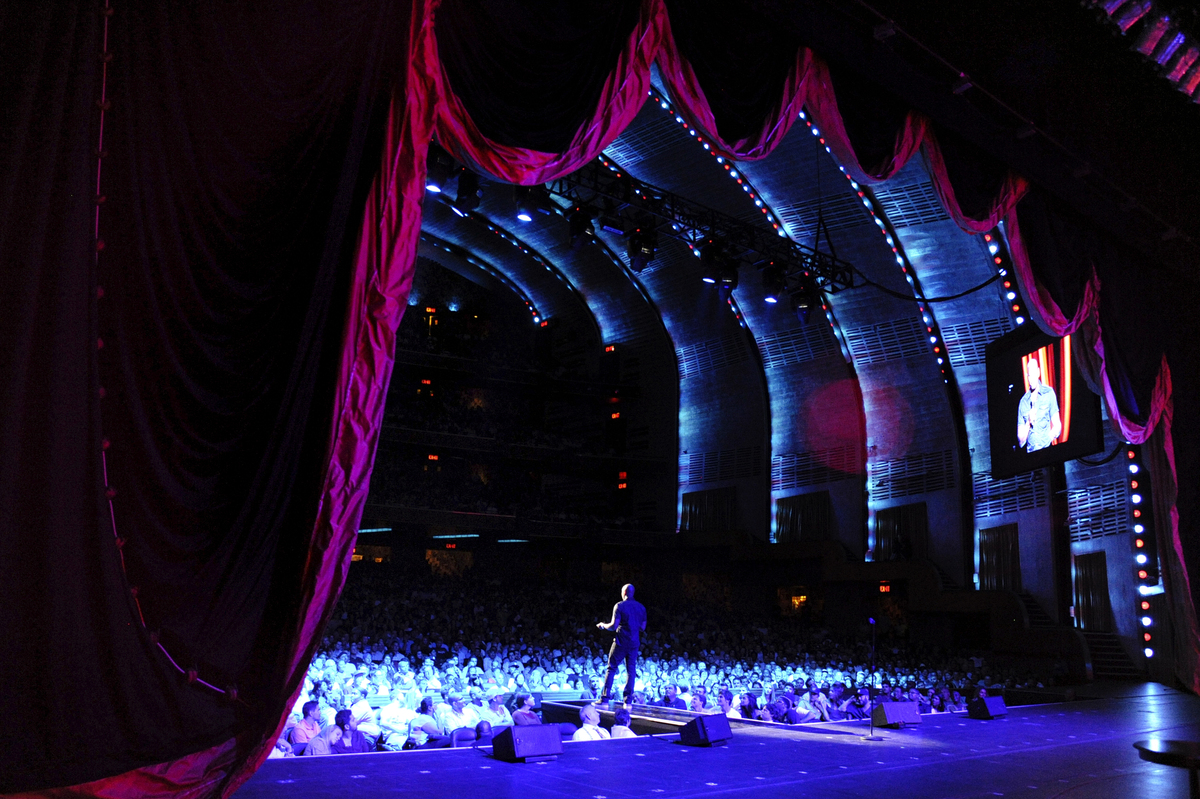 Chappelle said he hadn't been doing much in his time away from the spotlight, and that he wasn't allowed to go into detail about other activities, "like [attending] the Illuminati Christmas party."

In a great essay that ran last year in The Believer, Rachel Kaadzi Ghansah recounts her trip to Yellow Springs, Ohio, the small, hippie-ish town where Chappelle lived for his early life, and where he'd resettled during his hiatus from the spotlight. (The town's motto: Find Yourself Here.) She paints a picture of a dude trapped between the responsibilities of representing his race and the performance required by his act.

Ghansah spends some time with Chappelle's mother, Yvonne Seon, a fascinating figure in her own right. (When she was younger, Seon had planned to head to the Congo to work with the independence leader Patrice Lumumba. After Lumumba's assassination — both Belgium and the United States had wanted him dead — Seon went anyway. She went on to become a Ph.D. of African-American studies. She was also the first African-American woman to become an ordained minister in the Unitarian Universalist Church.) One area of her scholarly focus was the notion of Negritude, which Seon told Ghansah was "the process by which black people, who have been cut off from and made to learn to know themselves again, come to accept themselves, and begin to believe in (i.e. to value) themselves."

This was the ideological stew in which Chappelle was raised, and it clearly informed a lot of his art.

Race — and specifically the idea of sliding in and out of different racial identities — has been a staple of Chappelle's comedy. Remember Clayton Bigsby, the blind white supremacist who doesn't know he's black? That skit is based on a story from his real-life grandfather, a blind and very fair-skinned black man. One day, he was on the bus when some young black kids got on and threatened to rough up some white dude who was also on the bus. Chappelle's grandfather agreed with them. He didn't realize, though, that they were in fact talking about him.

At the Radio City Music Hall show, he delivers an aside about his own mixed heritage — his mother, Seon, is half-white — as well as his mixed-race family. (Chappelle's wife is Asian-American, and he has joked that his kids somehow turned out Puerto Rican.) "I know it doesn't look like it ... but if I grew out my hair, y'all would think you were at a Katt Williams concert," he joked. "Just long, flowing, good hair."

While race is a major fascination of Chappelle's comedy, he has often struggled with the burden of that megaphone. Ghansah again:

"But Chappelle, like Kanye West, grew up in a home where black activism and black leftist thought were the languages of the household. No wonder, then, that both Chappelle and West have wrestled so bitterly and publicly with their sense of responsibility to and also their failure to meet those same obligations. 'It's a dilemma,' Chappelle told Kevin Powell. 'It's something that is unique to us. White people, white artists, are allowed to be individuals. But we always have this greater struggle that we at least have to keep in mind somewhere.' "

Chappelle has famously cited that pressure as a key reason he walked away from his show and dropped off the map. He'd written a sketch with a jigaboo character, and was unsettled by the way a white member of the crew laughed during the taping. "That concerned me," he told Oprah way back in 2006. "I don't want black people to be disappointed in me for putting that [message] out there. ... It's a complete moral dilemma."

Just like Ghansah, The New York Times' Jason Zinoman went to Yellow Springs in his own search to figure out where Chappelle had gone and why. Zinoman situates Chappelle in a larger tradition of black comedy, and underscores a concern that has long dogged black comics who achieved a certain prominence. Chappelle — who started his standup career at the ridiculously young age of 14 — was often pulled between performing in clubs that catered to black audiences and those that catered to mixed audiences. (Again: the idea of racial fluidity.) Chappelle had a really good showing doing a swaggery, more performative version of his early act on Def Comedy Jam, the ribald show from the early '90s that put a bunch of future stars like Bernie Mac and Chris Tucker on the map. But he didn't want to be pigeonholed, and didn't want to propagate the notion that that raucous style was the only way black folks could be funny. (Again: the idea of social responsibility.)

Indeed, while most people saw Chappelle as the heir to the mantle of Richard Pryor — profane, subversive, topical — Zinoman posits that Chappelle's approach is somewhere in the sweet spot between Pryor and the more conservative Bill Cosby, who has talked a lot about black folks' responsibility to represent their race.

The Pryor-Cosby juxtaposition is often as heated and oversimplified as the Malcolm-Martin one, but it makes sense when you think about Chappelle. Both Pryor and Cosby are on the shortlist for the greatest comedians of all time. You could see echoes of both in Chappelle's routine at Radio City this week. Like Cosby, there were long, detailed stories about family life; they were punctuated by sharp, Pryor-esque detours into weirdness and debauchery. Chappelle tells a joke about how his wife treats him like a mischievous child, and, before she heads to bed each night, pleads with him not to eat the lunch she's packed for their kids. Sounds like a Cosby joke, right? Then he talks about how he can't help but murk all those perfectly wrapped sandwiches lying around the house after he's smoked up in the middle of night. That's all Pryor. 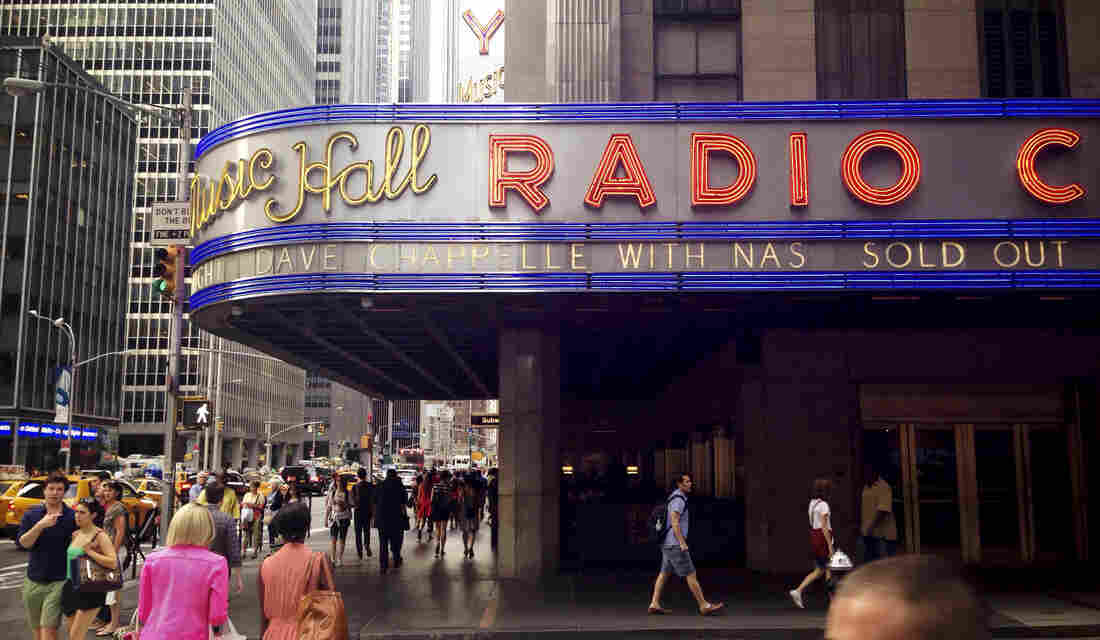 Dave Chappelle sold out the first five shows at his Radio City Music Hall minutes after the tickets became available. So he added more dates, where he would also be joined by musical guests including Nas, The Roots, and Erykah Badu. Kainaz Amaria/NPR hide caption 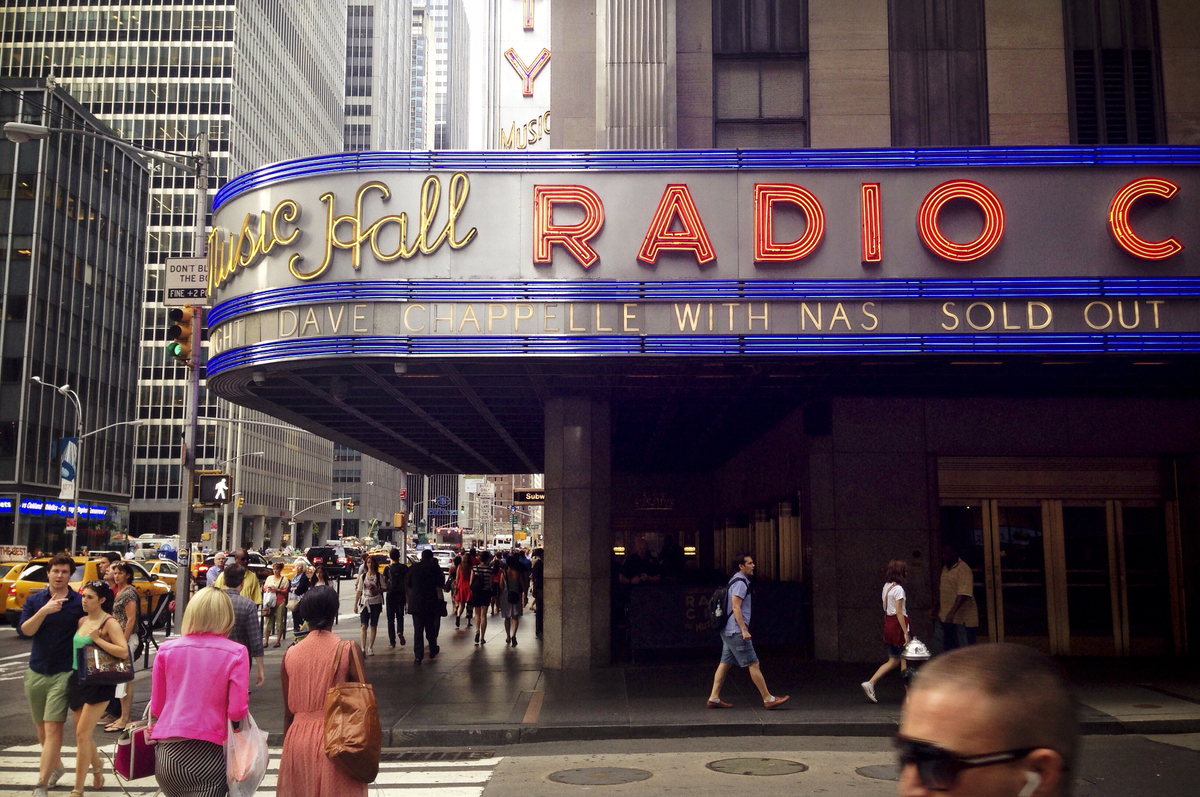 Dave Chappelle sold out the first five shows at his Radio City Music Hall minutes after the tickets became available. So he added more dates, where he would also be joined by musical guests including Nas, The Roots, and Erykah Badu.

The crowd spilled out onto Broadway after the show, all electric and sated. We wondered whether this was the beginning of a re-emergence that might endure, or whether the Radio City shows were just a valedictory. It's not like his reputation needs burnishing; he's already a legend. And it's not like he needs the money. This was fun and funny, but it might not ever happen again.

At the exits, employees handed out black T-shirts emblazoned with Chappelle's visage. The front read: Dave Chappelle; Radio City Music Hall. The back read: I WAS THERE ...