Accessibility links
Should Saying Someone Is 'Off The Reservation' Be Off-Limits? : Code Switch The term dates back to the 19th century when white traders would swap "firewater" for Indian goods and "off the reservation" was "a lonely and dangerous place for an aboriginal American to be." 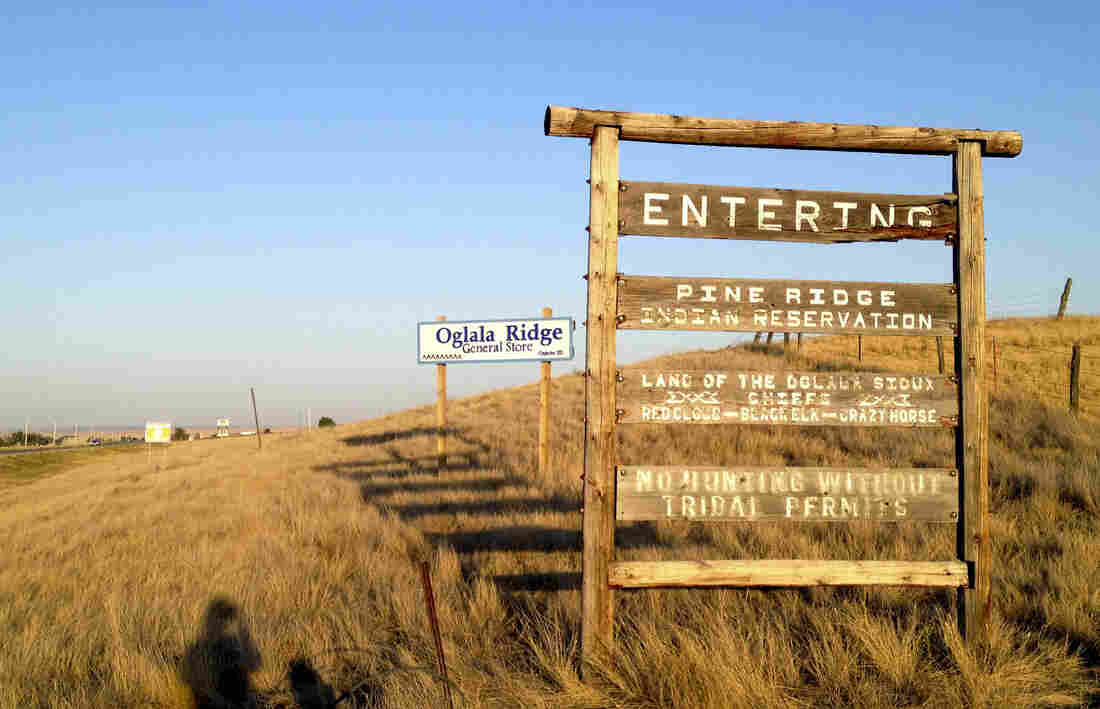 Signs marking the entrance to the Pine Ridge Indian Reservation in South Dakota make it clear when you're literally "off the reservation," but the figurative meaning of the phrase has shifted over time. Kristi Eaton/AP hide caption 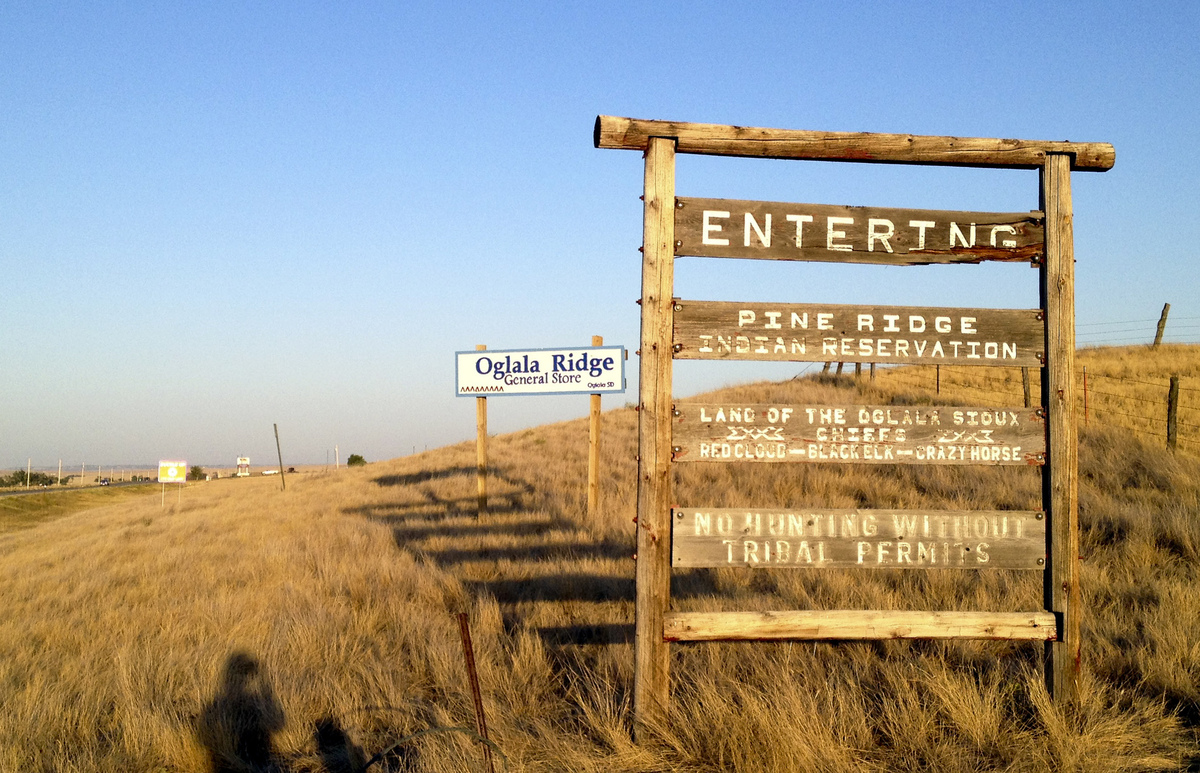 Signs marking the entrance to the Pine Ridge Indian Reservation in South Dakota make it clear when you're literally "off the reservation," but the figurative meaning of the phrase has shifted over time.

Maybe the meaning of these sorts of phrases never should have been the issue. Maybe living lives without thinking about what we say and do is of greater concern.

EDITOR'S NOTE: Each week, we take a look at a word or phrase that's caught our attention, whether for its history, usage, etymology or just because it has an interesting story. You can see the full series here.

Off the reservation is a common phrase, which many people use without considering the context of its original meaning. Namely, that Native American peoples were restricted to reservations created by the U.S. government, and their freedom was severely limited by the terms of the treaties they were often forced to sign.

I did some searching in archival and current newspaper databases, for both literal and figurative uses of the phrase. It appeared frequently in the 19th and 20th centuries, and it's not unusual to find it in recent headlines and articles as well.

The Original Meaning Of The Term

In its literal and original sense, as you would expect, the term was used in the 19th century to describe the activities of Native Americans:

"The acting commissioner of Indian affairs to-day received a telegram from Agent Roorke of the Klamath (Oregon) agency, dated July 6, in which he says: 'No Indians are off the reservation without authority. All my Indians are loyal and peaceable, and doing well." (Baltimore Sun, July 11, 1878)

"Secretary Hoke Smith...has requested of the Secretary of War the aid of the United States troops to arrest a band of Navajo Indians living off the reservation near American Valley, New Mexico, who have been killing cattle, etc." (Washington Post, May 23, 1894)

Many of the news articles that used the term in a literal sense in the past were also expressing undisguised contempt and hatred, or, at best, condescension for Native Americans — "shiftless, untameable...a rampant and intractable enemy to civilization" (New York Times, Oct. 27, 1886).

The Oxford English Dictionary defines the term as a metaphor meaning "to deviate from what is expected or customary; to behave unexpectedly or independently." It is interesting that the OED doesn't seem to be aware of its negative connotation.

Tracing The Shift In Meaning

The figurative use has a century-long history in American political life:

"It cannot be denied that the rank and file of the Progressives who are still off the reservation are eager to affiliate with the Republicans." (Baltimore Sun, March 5, 1916)

"Fourteen Republican [New York state] Senators are 'off the reservation' and the leaders of the Republican majority in the upper house, as a result, are short one vote of the number required...to repeal the Daylight Saving act." (New York Times, Feb. 23, 1921)

"A Democratic strategist said, 'They recognize the importance of speaking with one voice, and they don't tolerate anyone going off the reservation.'" (New York Times, June 1, 2005)

"In fact, since 1948, nine electors have wandered off the reservation, including a Ford elector who voted for Ronald Reagan in 1976." (Washington Times, August 29, 2012)

In Safire's 2008 book Political Dictionary, its usage in a political context is explained:

"Remaining nominally within a party, but refusing to support the party's candidate ... The phrase first surfaced in the Atlanta Constitution in 1909. The metaphor is rooted in traders' lingo, referring to Indian reservations in the days when unscrupulous whites would trade 'firewater' for goods, and off the reservation was a lonely and dangerous place for an aboriginal American to be."

A diarist for the Daily Kos, who identified himself as a "blood descendent of the Northern Blackfoot Nation," wrote last year about "how I was attacked for using the term 'Off The Reservation.' "

"UPDATE I AM NEVER USING THIS TERM IN ANY CONTEXT AND NO ONE SHOULD!" he added, emphasis his. He asked his readers, "Is this a term that needs to be abolished and ranks right up there with vulgar racial slurs used in the streets?"

Native Reaction To The Term

Andrew Bentley writes a blog for the National Relief Charities, a non-profit group that works with Native people in the Plains and Southwest. In 2012 he wrote:

"The issue with 'off the reservation' and similar phrases is that these things are said without any thought. They become a part of the common vernacular. Freely they move from mind to mind, mouth to mouth. Maybe the meaning of these sorts of phrases never should have been the issue. Maybe living lives without thinking about what we say and do is of greater concern."

I contacted several other Native American journalists for their perspective. While "off the reservation" may not be at the top of the list of racial slurs and insults against American Indians (see also the controversy over the name of the Washington football team, and the recent ruling about the trademark of that name and image), is it ever OK to use the phrase in any context?

Shirley Sneve is a Rosebud Sioux and Executive Director of Vision Maker Media. She says, "I do find 'Go back to the rez where you came from' offensive. Seems to me like most non-Indians' faux pas come out of ignorance. Pharrell Williams' headdress on the cover of Elle [UK] is the latest example of ignorance. We are such a small minority that most folks don't give us a second thought. I find it offensive, and let others know that."

"I bristle when I hear the phrase because many of the people who use it nonchalantly have likely never thought about its origin, nor have they probably ever visited a reservation."

"It's not about political correctness, either, it's about helping the majority realize that there is a minority point-of-view that holds weight that the majority is giving too little credence. To me, there are indeed many more offensive words involving American Indians than this phrase — including the name of the Washington football team — but I believe it is the common use of phrases like 'off the reservation' that allows people to end up being comfortable going further — to the point of using a slur to name a football team that supposedly honors Indians, but not realizing that it is actually a slur."

Within the Native American community, there are other reactions to the phrase, which serve to remind us of the complexities of ethnic and racial identity. Brian Bull, a producer/reporter for Ideastream in Cleveland and president of Vision Maker Media, shared his experience with me.

"To a Native like me," he said, "half Nez Perce who grew up off the reservation, the term can feel like a slight; you're not genuine or in-the-know compared to those who did live on the rez. I sometimes see t-shirts that say FBI — not Federal Bureau of Investigation, but Full-Blooded Indian."

Kee Malesky worked as a librarian for NPR for 30 years. She's the author of two collections of interesting and unusual facts, All Facts Considered (Wiley, 2010) and Learn Something New Every Day (Wiley 2012).