Accessibility links
What We Talk About When We Talk About Violence In Chicago : Code Switch Chicago's July 4th weekend was an especially bloody one. It was covered like another grim day. But the way we look at shootings in that city obscures the complexity of its tragedies. 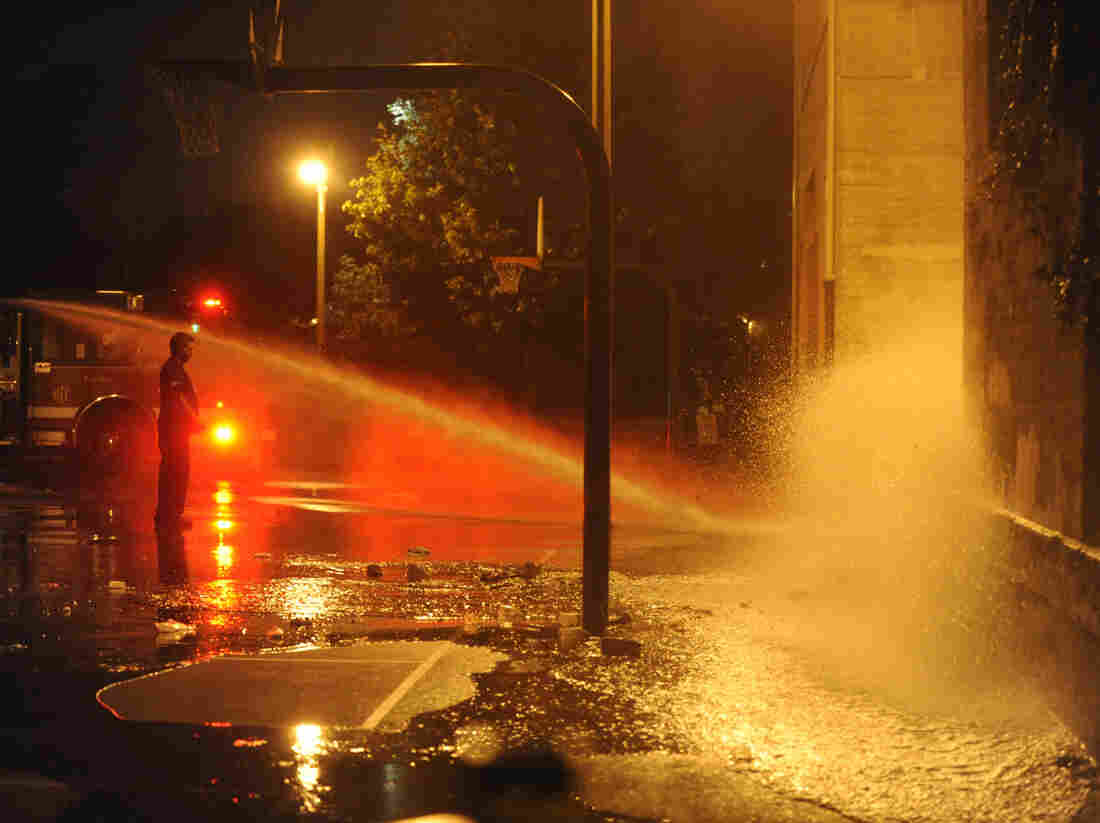 Firefighters in Chicago hose down the scene of a shooting last fall where several people, including a toddler, were shot. Paul Beaty/ASSOCIATED PRESS hide caption 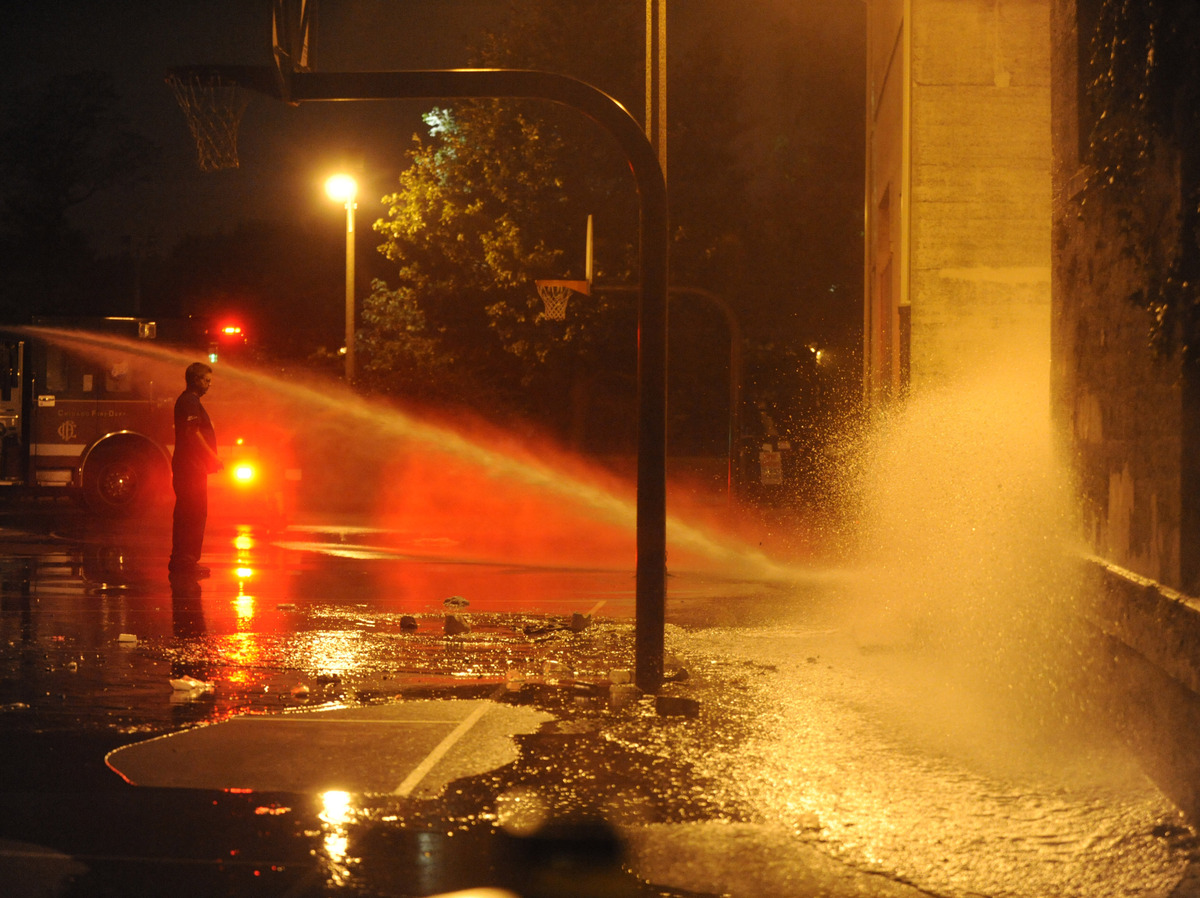 Firefighters in Chicago hose down the scene of a shooting last fall where several people, including a toddler, were shot.

We have a default template for the way we process mass shootings. We scour through every available scrap of the perpetrators' interior lives – Facebook postings, YouTube videos, interviews with former roommates — to try to find out what drove them to kill. The sites of the massacres become a kind of shorthand: Columbine, Sandy Hook, Fort Hood. We conduct protracted, unsatisfying conversations about gun rights, and about mental illness, and about how we have to make sure that they never happen again.

We also have a template for the kind of carnage we saw in Chicago last weekend, in which at least 80 people were shot in 21 separate shooting incidents. At least 14 people died. The conversation and the coverage here is different, less probing. There are no attempts to illuminate the killer's psyche, no news coverage of the anniversaries of the shootings. These incidents are generally not treated as discrete events, but as part of a grim, undifferentiated parade of violence in the Chi. It's a war zone. Welcome to Chiraq. Send in the National Guard.

What these templates have in common is that they blunt the contours of individual lives and their particular, tragic ends.

Following Killings, One By One

Michael Lansu is the editor of the Chicago Sun-Times' Homicide Watch blog. His team's job is to report on every individual killing in the city. It's grisly work. And last weekend was really, really busy.

Police will say that the victim is a documented gang member, but that doesn't necessarily mean the shooting was gang-related. Gangs are not basketball teams with rosters. The lines are blurry.

"We were busy from Sunday morning all the way to Monday night," Lansu said. The victims, he said, were "mostly between 20 and 35, black and Hispanic men." For the year, the total number of killings in the city after the July 4th weekend is around 200, he said — a little higher or lower depending on which agency's numbers you're looking at.

Homicide Watch tries to fill out the pictures of the victims' lives as much as they can, and follow the cases of the suspected killers as they wind their way through the courts. When you have to look at the violence in Chicago with this level of granularity, a very different picture emerges.

"Police will say that the victim is a documented gang member," Lansu said, "but as far as I'm concerned, that doesn't necessarily mean the shooting was gang-related." He said that if you live on a block where gang members live, members of rival gangs don't often care much about the distinction: We know you're from that block, so you must be down with the clique on that block. He said that he heard there were now around 600 gang sets in the city, very small bits of turf.

That means crossing into a different neighborhood — to, say, go to school — might mean crossing into the territory of a group that has beef with gang members near you. You might be implicated in that beef not by association, but by geography.

"It's not a basketball team with rosters," Lansu said. "The lines are blurry."

At a news conference last week, Chicago police officials displayed some of the nearly 3,400 illegal firearms they have confiscated so far this year in their efforts to reduce gun violence. Eighty people were shot in Chicago over the three-day Fourth of July weekend. M. Spencer Green/AP hide caption

At a news conference last week, Chicago police officials displayed some of the nearly 3,400 illegal firearms they have confiscated so far this year in their efforts to reduce gun violence. Eighty people were shot in Chicago over the three-day Fourth of July weekend.

I asked Lansu about how the city's violence is typically handled in the news media. "In general, most of the stories [in the local media] aren't focused on the victims," Lansu said. "That's not always the case, but the statistics kind of take the lead."

He went on: "I think the national media only pays attention to Chicago when its an issue of sheer numbers." But even then, the terminology is still different. "In Chicago, there were [seven] people shot outside of a laundromat, and no one uses the term 'mass shooting,'" he said, referring to an incident there in June. (There is no official FBI definition for a "mass shooting," Mother Jones says, although there is one for "mass murder.")

It's a point that was underlined in a much-discussed column written by David Dennis for the Guardian about the New Orleans incident.

I've learned to redefine what constitutes an American tragedy. American tragedies occur where middle America frequents every day: airplanes, business offices, marathons. Where there persists a tangible fear that this could happen to any of us. And rightfully so. Deaths and mayhem anywhere are tragic. That should always be the case. The story here is where American tragedies don't occur.

American tragedies don't occur on the southside of Chicago or the New Orleans 9th Ward. They don't occur where inner city high school kids shoot into school buses or someone shoots at a 10-year old's birthday party in New Orleans. Or Gary, Indiana. Or Compton. Or Newport News. These are where the forgotten tragedies happen and the cities are left to persevere on their own.

What A Death Toll Doesn't Tell Us

Treating Chicagoland violence as merely a tally necessarily dehumanizes its victims, but it also obscures so much of the larger story about that violence. It's data without context.

The next big crime story is closing the crime gap. As a society, we're trying to do that to fix income equality, educational inequality — or I shouldn't say we're trying but we're talking about it — but the crime gap hasn't changed.

"If I tell you someone [weighs] 200 lbs., are they fat?" Andrew Papachristos, a Yale sociologist who has been studying crime in Chicago for years, told me on Thursday. "No, you'd need to know about a bunch of other stuff."

Folks started calling Chicago the "murder capitol" after it logged more than 500 murders in 2012, more than any other city in the country. But simply considering the total homicide numbers for different cities in a given year is hardly an apples-to-apples comparison. How large is a city's population? Is that population spread out over a sprawling region or is its densely packed? If you were to assign that label to any city — and again, that designation paints a very incomplete, unhelpful picture — it might be less useful to look at total homicides and instead to look at the city's homicide rate — the ratio of homicide to the total population. That is: how likely is a resident in a place to die by homicide? By that measure, Chicago doesn't even crack the nation's top 10.

Papachristos underscored an often-overlooked point: homicides in Chicago have been steadily declining for years, as they have everywhere in the country. A bloody stretch like the July 4th holiday suggests a different story and reinforces the city's violent rep, but it's a particularly gruesome bit of statistical noise.

"It was an awful, awful horrific weekend," Papachristos said. "But you cannot predict a trend based on a weekend. There are spikes and drops. It never goes down in a straight line."

There are other details worth considering. The number of shooting deaths in Chicago has fallen while the number of shootings have not. ("Generally, there are about four shootings for every fatal homicide," he said. "In Chicago, it's eight shootings per homicide." ) That might explain why even though violent crime is ebbing, as Papachristos says, the residents in the city's most violent neighborhoods don't report feeling safe.

And that violence also isn't equally distributed — not even close. Papachristos points to what he calls "the crime gap" — the huge disparity in homicide rates in different areas of the Windy City. "Even though the numbers in Chicago are what they are, the gap between the worst neighborhoods and the best neighborhoods is massive," he said. The neighborhoods that have had the highest rates of violence over the last half-century still see the most violence. In a paper published last year, Papachristos found that between 2000 and 2010, the murder rate for Jefferson Park on Chicago's Northwest side was about 3.1 per 100,000 residents. But in West Garfield Park, on the West Side, the homicide rate was 64 per 100,000 — more than 20 times higher.

The neighborhoods are about 10 miles apart, but may as well be different cities.

"The next big crime story is closing the crime gap," Papachristos said. "As a society, we're trying to do that to fix income equality, educational inequality — or I shouldn't say we're trying but we're talking about it — but the crime gap hasn't changed."

But even in the violent neighborhoods, everyone isn't equally at risk. Shooting and homicide victims tend to be tightly clustered, both socially and physically. "Eighty-five percent of violence — any shootings — happens among five percent of people," Papachristos said. "It happens in these very small networks." According to research he did with his Yale colleague, Chris Wilderman, the gunshot victims in one troubled West Side neighborhood were overwhelmingly likely to be people with prior arrests. They were just a few handshakes removed from other gunshot victims, and likely to live within a few blocks of each other.

These are facts about Chicago that don't sit comfortably next to each other. Violence continues to fall even as we see horrible paroxysms of bloodshed like the Fourth of July weekend. "Gang-related shootings" are not necessarily "gang-related shootings." And some neighborhoods are as safe and stable as any city in the United States, while others are far, far bloodier.

We have templates that we superimpose on Chicago and places like it. These templates distort the ways violence comes to bear on individual lives, obscure the patterns that come with that violence, and shape the ways we think about ameliorating it. These are each human-scale tragedies worthy of human-scale consideration. To really understand what happened in Chicago last weekend, we have to be able both to see those shootings as mass shootings, and to see the lives they shatter.