Accessibility links
Viola Davis Gets Groundbreaking Role As ABC Bets On Diversity : Code Switch This fall, ABC will offer its most ethnically diverse slate of new shows in recent memory. But getting people to talk freely about why that's happened is still difficult. 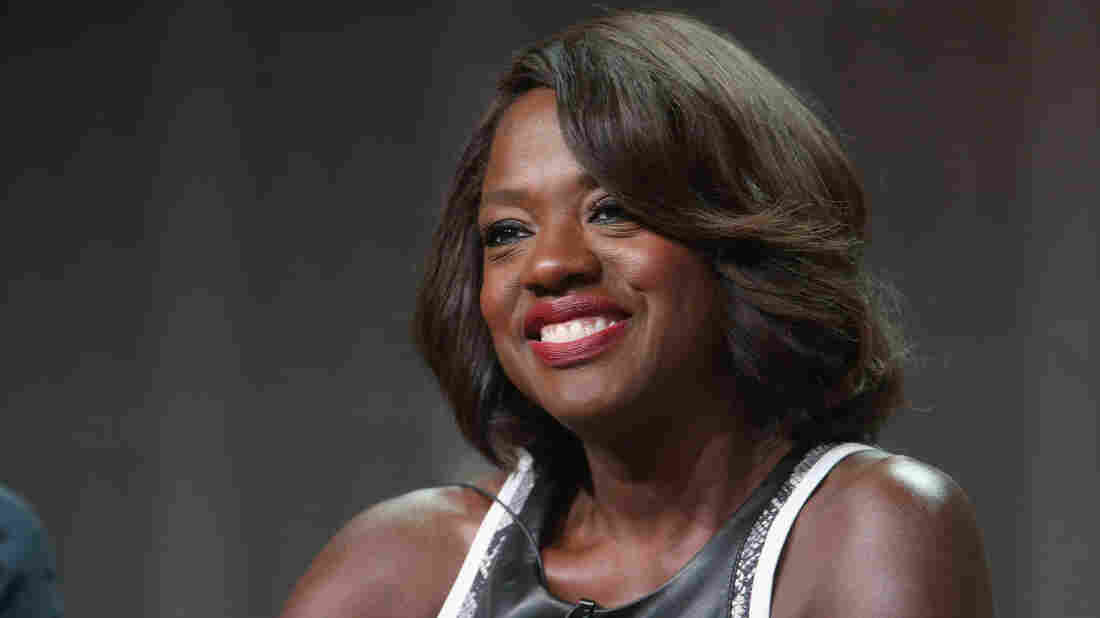 Actress Viola Davis speaks about her new ABC show How to Get Away with Murder at the Television Critics Association's summer press tour in Los Angeles. Frederick M. Brown/Getty Images hide caption 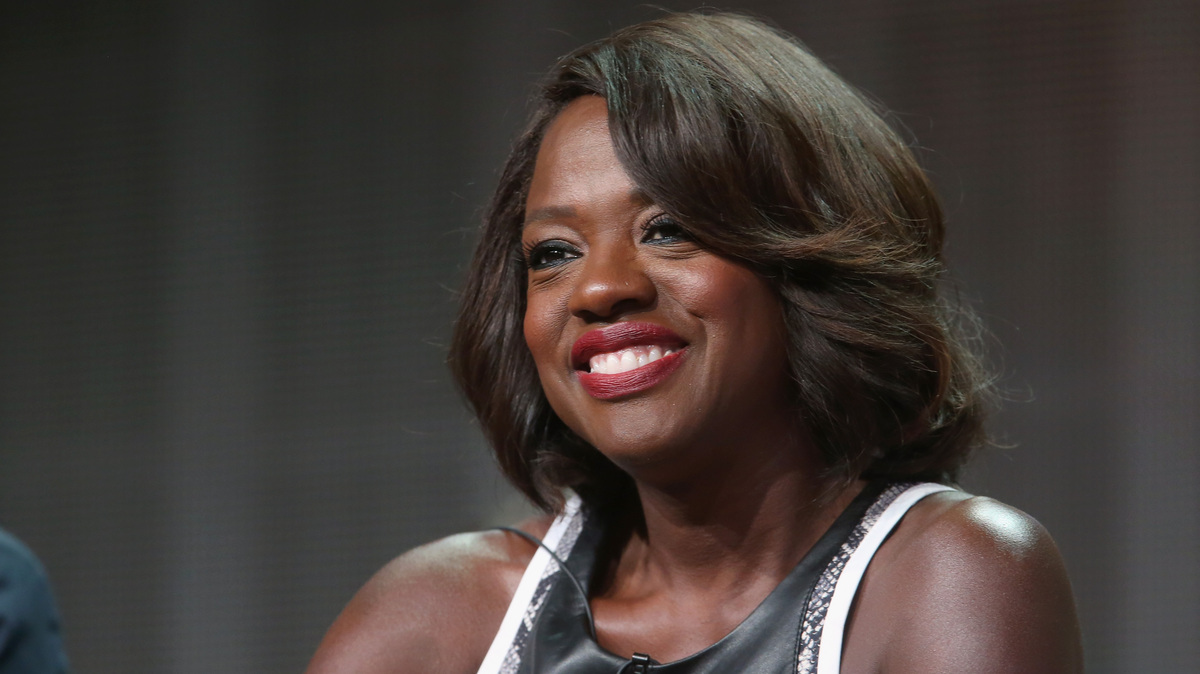 Actress Viola Davis speaks about her new ABC show How to Get Away with Murder at the Television Critics Association's summer press tour in Los Angeles.

She has won a Tony Award, been nominated for an Oscar and joined Time magazine's list of the most influential people in the world.

But until she was cast as sexy, hard-nosed attorney and law professor Annalise Keating on ABC's new drama How to Get Away with Murder, Viola Davis had never seen a dark-skinned black woman her age playing the kind of role she will inhabit this fall.

"There is no way in the history of film or TV that you've seen a character like this played by a black woman who looks like me," said Davis, 48, facing a handful of journalists after a press conference on the show at the Television Critics Association's summer press tour in Los Angeles on Tuesday. "This is progressive. This is a first."

A preview of ABC's new fall drama, How to Get Away with Murder.

A preview of ABC's new comedy Fresh Off the Boat.

For ABC, Tuesday was also a first: The network faced a ballroom filled with critics for the first time since unveiling a schedule of new shows for 2014-15 that was the most ethnically and culturally diverse in recent TV history.

It's the kind of sexy, powerful role Davis has wanted for herself for years, but was convinced Hollywood might never present to her — because she was so different-looking from even other black actresses who have become stars in film and TV.

"Not even Kerry Washington or Halle Berry [looks like me]. I'm talking about a black woman who looks like me — a dark-skinned black woman with the nose, the age, in every way like me," added the actress, best known for playing maid Aibileen Clark in the 2011 film The Help. "No one has taken my look in that way and put it on the screen. Shonda's been the first."

"Shonda" is, of course, Shonda Rhimes, the superstar TV producer who created the ABC hits Grey's Anatomy and Scandal, serving as executive producer of How to Get Away with Murder. The new show was actually created by Peter Nowalk, a writer who cut his teeth as a producer on Grey's and Scandal, learning how to make TV on the network of Rhimes-created shows known collectively as "Shondaland."

But it's Rhimes' name that looms largest in the show's credits, as ABC has turned its entire Thursday night this fall over to her shows — counterprogramming NFL games on rival CBS with Grey's, Scandal and Murder. And Rhimes, who is arguably the most successful black TV producer/creator/writer in history, said she never had a doubt that Davis could play the kind of femme fatale that they needed.

"I caught Viola [on a talk show] saying, 'Nobody's going to put me in a love scene with Bradley Cooper,' and everybody laughed," Rhimes said. "And I remember going, 'Why not?' That was the first time I thought, 'Why is she saying that?' ... I don't know why someone else wouldn't think she was sexy and beautiful and gorgeous; that's their problem. But I always thought she was."

Rhimes can sometimes seem dismissive when talk turns to race and TV, sidestepping questions about the importance of her shows in demonstrating to Hollywood that it can make money by creating television that looks as diverse as America. 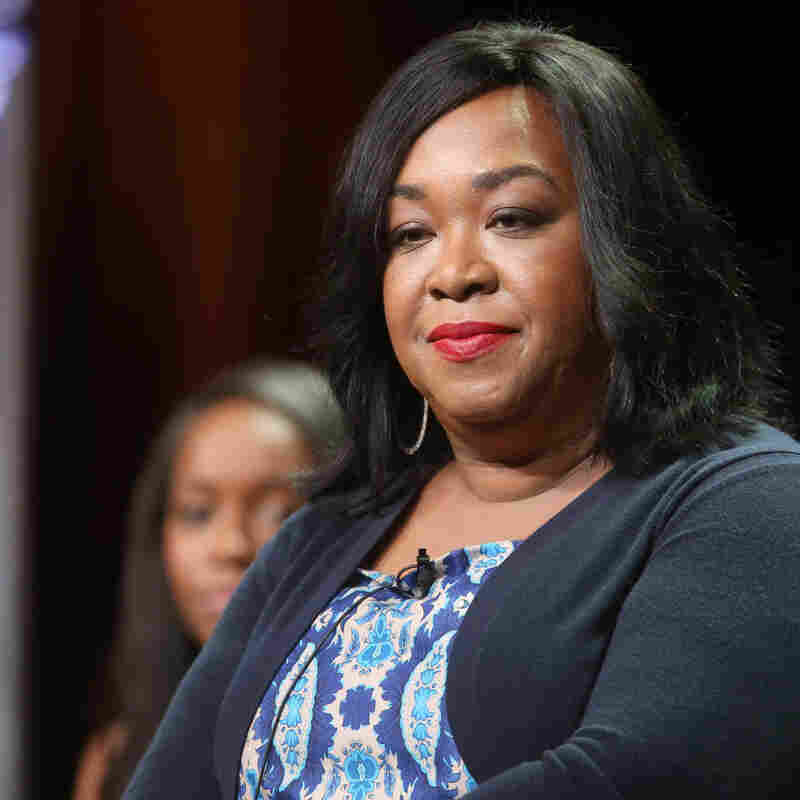 Shonda Rhimes, executive producer of How to Get Away with Murder, speaks during the Television Critics Association's summer press tour in Los Angeles. Frederick M. Brown/Getty Images hide caption 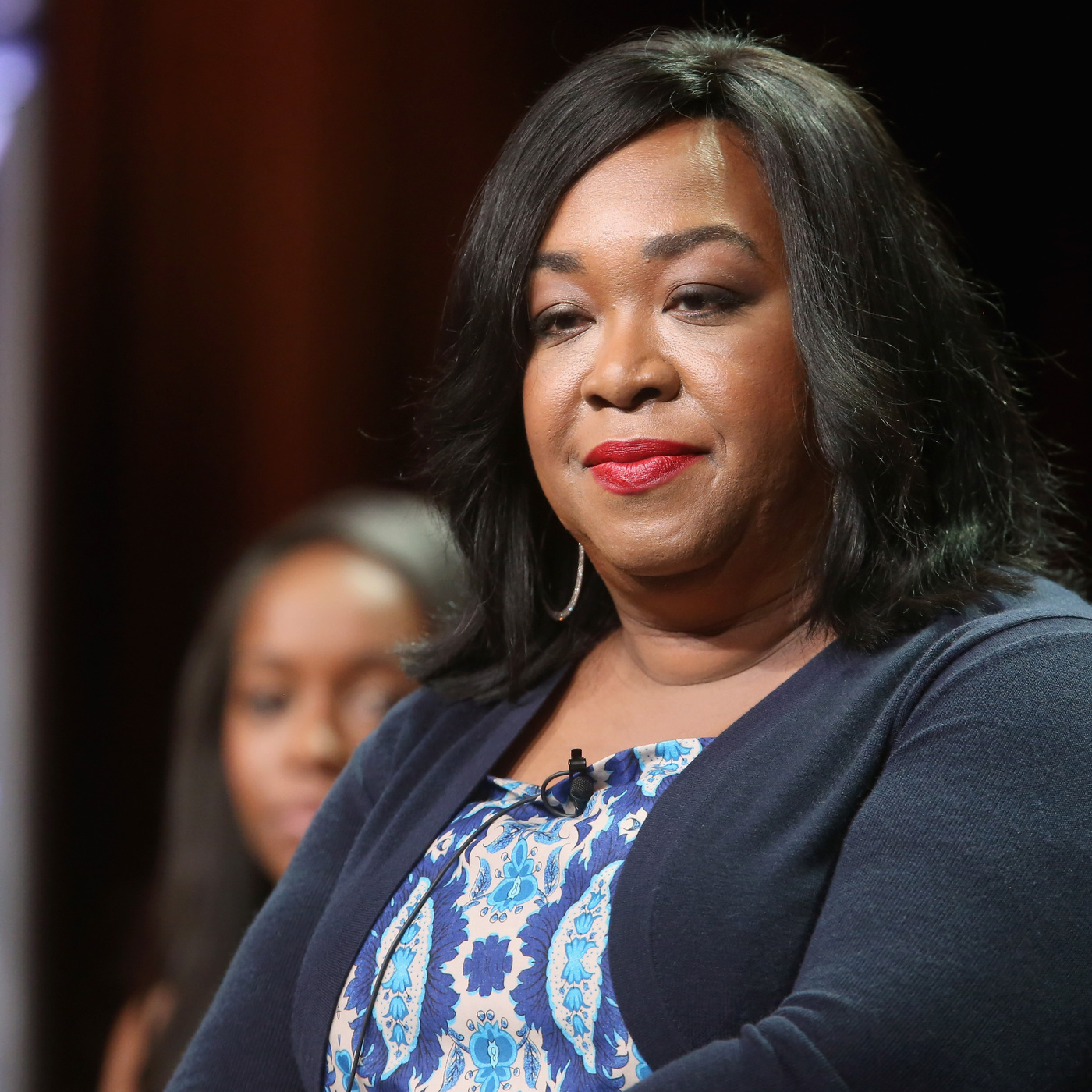 Shonda Rhimes, executive producer of How to Get Away with Murder, speaks during the Television Critics Association's summer press tour in Los Angeles.

But Scandal star Kerry Washington is the first black woman to star in a TV drama in nearly 40 years (Teresa Graves' mid-'70s show Get Christie Love! was the previous program). And this fall, ABC will have two dramas starring black women airing on the same night, executive-produced by a black woman — a feat with little precedent in an often diversity-challenged industry.

"A lot of the questions I get about race are really annoying," Rhimes said. "I get a lot of 'Why is it so hard to cast people of color?' questions. My answer is always 'Why are you asking me that question? Why don't you ask someone who is not casting people of color? ... I would rather you just look at the work. Because the world of television should look like the world outside."

The fact is, Hollywood has found it extremely difficult to cast people of color as stars in TV shows. Forget about Seinfeld or HBO's Girls presenting a New York that seems mostly devoid of nonwhite people; even ABC's fall comedy Manhattan Love Story has few nonwhite supporting characters, despite its setting in one of the most diverse cities in the nation.

Looming in the background is a question you would think TV had settled years ago: Will mostly white network television audiences watch shows with mostly nonwhite casts and subject matter?

ABC entertainment chief Paul Lee doesn't offer many specifics on why this is the year the network decided to go big on diversity — for example, suggesting that producers of their social media-influenced update of Pygmalion, a comedy called Selfie, cast Korean-American actor John Cho as its Henry Higgins-style co-star. 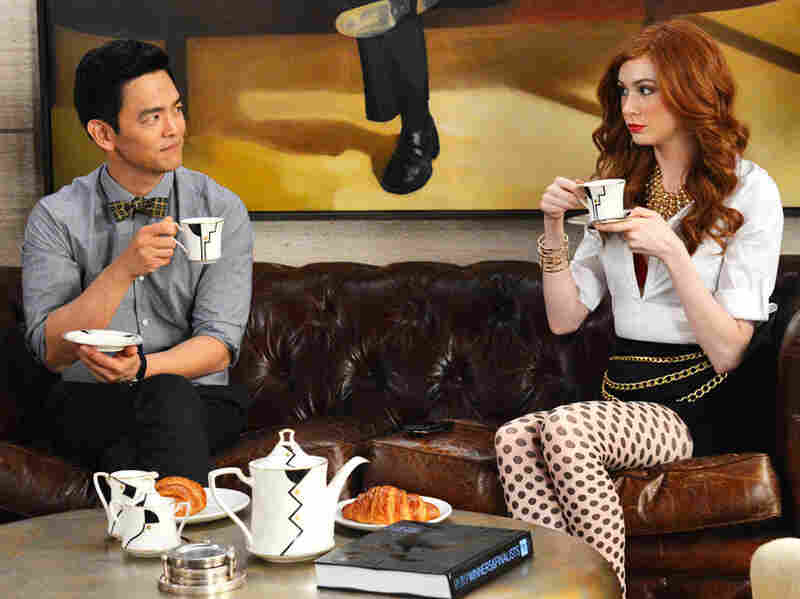 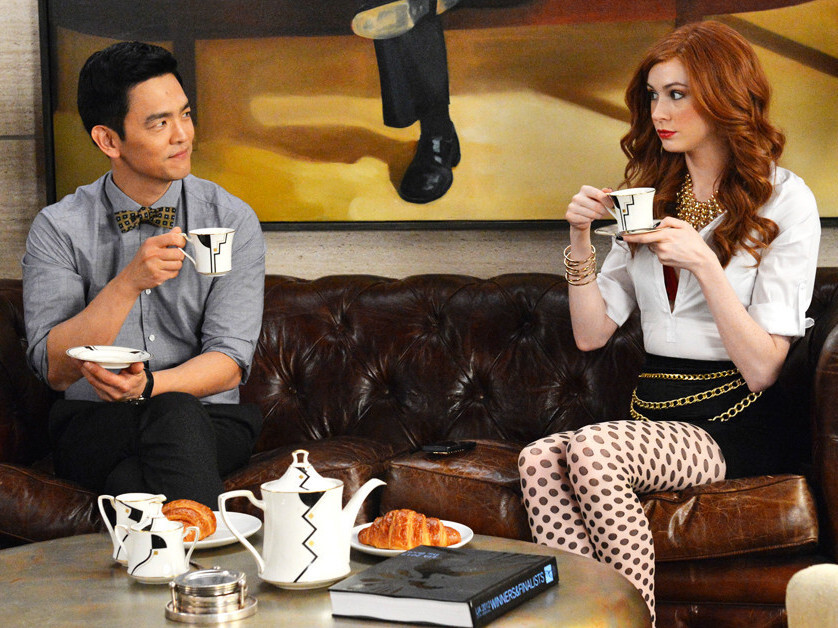 Lee credits a diverse team of executives and show creators for building worlds that "reflect America," noting "that's about authenticity rather than diversity. We picked up the best shows to come out of development. It just so happens ... we think [every] one of these programs are great shows."

Which is a bit of a shame. Because, even as ABC advances its most ethnically and culturally diverse slate of new shows in a long while, its top entertainment executive still doesn't seem comfortable admitting that the network has made diversity a priority and seems to be taking specific steps to ensure its shows are more balanced.

In Hollywood, words like "diversity" and "multiculturalism" can be dismissed as misguided attempts to bring social justice to casting and story decisions. But "authenticity" is a goal every TV producer values. In the end, the message is a simple one: TV shows are better when they feature a diversity of characters and story subjects.

And it's not just about casting people of color. Several of ABC's shows also make race an important subject of stories — from Fresh Off the Boat's tale of a Chinese family who moves to Orlando from Washington, D.C., to Black-ish's story of a successful black executive who worries his kids have lost their culture.

"We [are] pulling apart something, a dialogue that I've always had," said Black-ish star Tracee Ellis Ross, the biracial daughter of singer Diana Ross. "As a mixed girl, you're constantly [asked], 'Are you black? Are you white?' I'm like, 'Why do I have to be either?' And so this idea of what is race, what is black, what is this conversation ... I think it's a conversation that everyone is already having and, yes, we are telling it specifically from this point of view [of a black family], but it is a universal conversation. ... It's really fun for me to, for the first time, play a mixed person on television."

Lee is the first to note that these moves are more of a first step than anything. Despite the increase in diversity, for instance, Hispanic actors and producers still seem disproportionately left out of the mix.

And Rhimes brings up another important reason for not talking too loudly about the upcoming fall season: What if the shows don't work?

"I always feel you don't want to run around saying 'How great am I?' before the moment happens," she said. "It could happen and nobody watches."