Accessibility links
How Turbans Helped Some Blacks Go Incognito In The Jim Crow Era : Code Switch At the time, ideas of race in America were quite literally black and white. But a few meters of cloth changed the way some people of color were treated.

There's a weekly trial on the Internet about who may be stealing culture from whom. Earlier this week, the defendants were Iggy Azalea and white gay men. A while back, it was Macklemore and the Harlem Shakers.

Now, we have come across a story from the Jim Crow era about cultural mimicry between people of color. 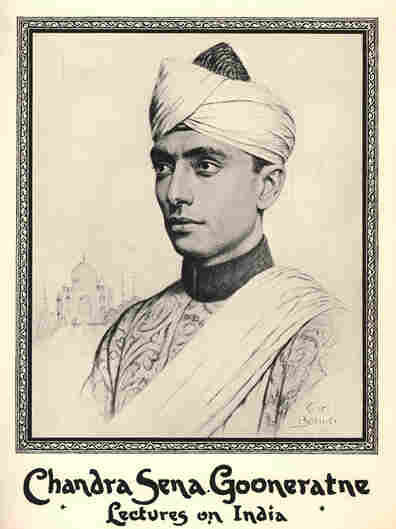 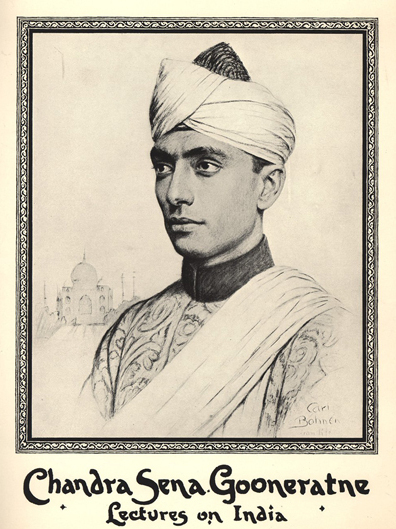 In mid-20th century America, the turban was a tool that people of color used for "confounding the color lines," writes Manan Desai, board member of the South Asian American Digital Archive.

At the time, ideas of race in America were quite literally black and white. In some places, if you could pass yourself off as something other than black, you could circumvent some amount of discrimination. People of color — both foreigners and African-Americans — employed this to their advantage. Some did it just to get by in a racist society, some to make a political statement, and others — performers and businessmen — to gain access to fame and money they wouldn't have otherwise had.

'A Turban Makes Anyone An Indian'

Chandra Dharma Sena Gooneratne was getting a doctorate at the University of Chicago in the '20s. Originally from Ceylon (now Sri Lanka), he traveled around America lecturing on the need to abolish the caste system and on India's push for independence from the British, among other topics.

In a recent article about Gooneratne, Desai notes that visiting scholars from Asia and Africa, like Gooneratne, were startled to encounter anti-black discrimination. But some of these people, who were lugging around colonial baggage from their own countries, found a way around racism.

Gooneratne, for one, used his turban while traveling in the Jim Crow South to avoid harassment, and advised others to do the same, Desai writes.

"Any Asiatic can evade the whole issue of color in America by winding a few yards of linen around his head," Desai quotes Gooneratne as saying. "A turban makes anyone an Indian."

Pause. Let's take care of a couple of housekeeping details: A turban isn't exclusively Indian. It has variations in the Middle East, East Asia and North Africa. But it was seen as a "racial marker" for Indians, Desai notes, and led to acts of violence against Sikh communities in North America in the 19th century. South Asians weren't immune to racial prejudice.

A newspaper photo of the Rev. Jesse Routté after his "turban trick" in Alabama. ProQuest Historical Newspapers Archive hide caption

The 'Turban Trick': A Political Statement

I spoke with Paul Kramer, a historian and professor at Vanderbilt University, who found that the turban was also used by African-Americans. They sometimes added robes, accents and carefully cultivated personas to bypass segregation laws and other kinds of discrimination. 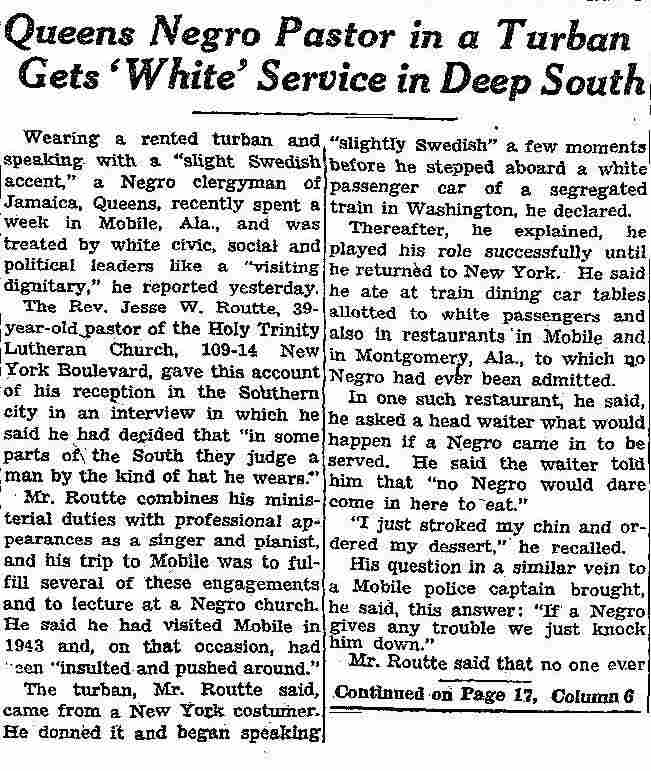 He's written about about a black Lutheran minister, the Rev. Jesse Routté, who pulled off what Kramer calls the "turban trick."

Routté had traveled to Alabama in a turban and robes, put on an accent, and quickly realized that it was quite easy to fool everyone there into thinking he was a foreign dignitary — and to be received as one.

"Then it kind of goes viral in 1940s terms," says Kramer, "where the press picks it up, it becomes this colorful story that people are talking about." When an article appeared in The New York Times, he says, people started pulling up examples of other cases.

"He's not the first person to pull this off," says Kramer, "so it's not entirely a novelty."

But Kramer says Routté is the sole representative of the first category of African-American turban wearers — those who did it to make a political statement.

Routté's experiment began after he traveled to Mobile, Ala., in 1943 for a family engagement. He wasn't happy with how he was treated.

Before he boarded the train to Alabama, he put on his spangled turban and velvet robes. When the train reached North Carolina during lunchtime, Routté walked over to the diner car where the only vacant seat was occupied by two white couples.

One of the men said, "Well, what have we got here?" to which Routté replied in his best Swedish accent (he had been the only black student at a Swedish Lutheran college in Illinois), "We have here an apostle of goodwill and love" — leaving them gaping.

And that confusion seemed to work for Routté on the rest of his trip. He dropped in on police officials, the chamber of commerce, merchants — and was treated like royalty.

At a fancy restaurant he asked the staff what would happen if a "Negro gentleman comes in here and sits down to eat." The reply: "No negro would dare to come in here to eat."

"I just stroked my chin and ordered my dessert," he said.

After he returned to New York, Routté said he felt like "a paratrooper behind enemy lines."

His son Luther Routté is now 74. Both of his parents — prominent in activist communities in Harlem and Long Island — were always doing "social experiments," trying to find solutions to the prejudice they saw in the world. And this experiment exploded the myth that blacks were innately inferior and warranted inferior treatment, he says.

"He didn't change his color. He just changed his costume, and they treated him like a human," says Luther Routté, who has been a Lutheran pastor for 25 years. It "shows you the kind of myopia that accompanies the whole premise of apartheid or segregation."

Through the "turban trick," Routté basically transformed himself from a threat to a guest — black to invisible.

The second category Kramer mentions is performers who took on an "exotic" persona — "something that identifies them as foreign and mysterious within American popular culture." These guys had some sort of personal gain in mind. 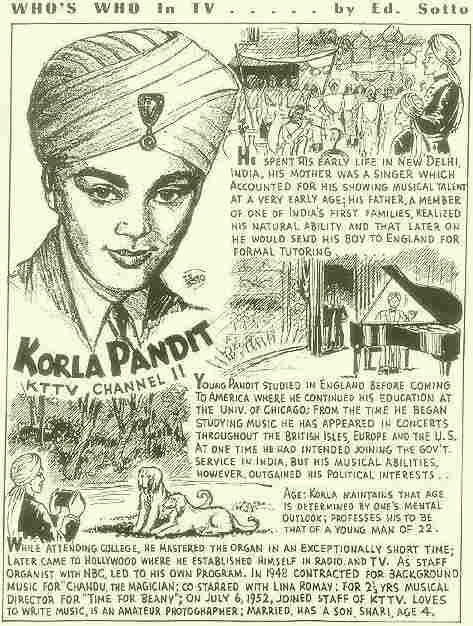 A KTTV poster about Korla Pandit says that he was born in New Delhi. Courtesy of korlapandit.com hide caption

There was Harlem nightclub owner Dicky Wells, who called himself the "Maharajah of Hattan" and who used to embark on cruises with white patrons to Nassau and Cuba. Joseph Downing, from Illinois, anointed himself "Prince Jovedah de Rajah," a financial adviser to white bankers who used to frequent the most posh hotels in Miami and Palm Beach.

And then there was Korla Pandit.

Pandit was a musician and television personality, regarded by many as a precursor to Liberace. On TV, Pandit would play the Hammond organ while smoke swirled around him. He'd gaze mysteriously into the camera, locking the viewer in a hypnotic embrace.

Newspapers exalted his musical ancestry as the son of a French opera singer and an Indian father hailing from the far-off New Delhi. In Hollywood, he released records, was offered his own TV show and enjoyed a significant fan following. He was the father of the "kitschy, postwar musical genre 'Exotica,' " Desai writes in his upcoming article about Pandit in the Journal of Popular Culture.

There was just one small thing: Korla Pandit wasn't Indian.

He was born John Roland Redd, son of an African-American minister from Missouri. When he moved to California in 1949 and started work at a radio station, it was under the name Juan Rolando. 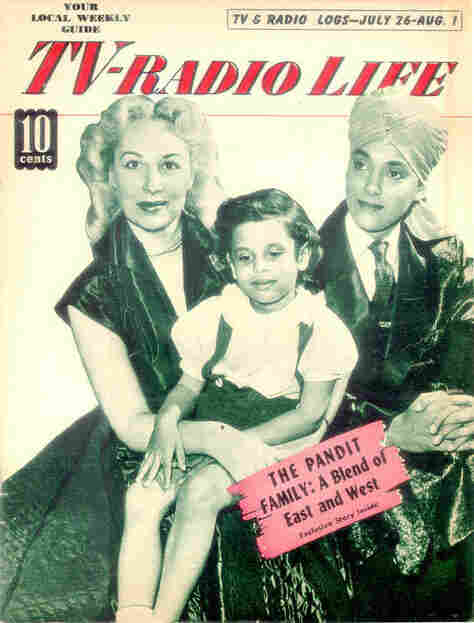 An old magazine cover with Korla Pandit and his family. Courtesy of korlapandit.com hide caption

Freek Kinkelaar, who runs Korla Pandit's website, had never met Pandit, who died a few months before Kinkelaar was able to get in touch with him. Now, Kinkelaar is working with filmmakers to make a documentary about the musician.

Redd, in his Mexican persona as Juan, married a white woman named Beryl in 1944 in Mexico. But soon, Kinkelaar says, in light of reports of aggression against Mexicans, Beryl helped Redd transform from Juan into Pandit — "Indian, perhaps not white, but white enough for the larger audience."

Being "white enough" had its privileges.

"A privilege, if you want to call it that, was also the gaining of a large, predominantly female audience," Kinkelaar says, which he wouldn't have had if he were perceived to be African-American or Hispanic. He was also the first black man to have his own TV show, writes journalist R.J. Smith in Los Angeles Magazine.

And he worked his audience well — with his signature dreamy gaze, his gnomic idioms and his backstory that became more and more fantastic, Korla Pandit wove a heady persona, supplementing it with all the tropes and motifs that characterize "exotica" — dancing courtesans and elephants all laced into the imagery.

"Quite dramatically, exotica took its listeners into primitive destinations, far away from the confines of the suburban homes and the living rooms that housed both their record players and television sets," writes Desai. But although he avoided one set of color lines, he stepped into "new ones drawn at the beginning of the Cold War."

How much Pandit actually knew about his adopted identity is anyone's guess.

"I am convinced Korla knew, like most Americans, almost zero about people from India," Kinkelaar says. " 'Exotica' was known as a term; it offered possibilities to Korla and his career; he took them by both hands and nearly drowned."

Pandit did submerge himself in his new identity, so much so that even his license plate read "I AM KP," says Kinkelaar. Even on Pandit's death certificate, which his son signed off on, the race box read "white," signaling the ambiguity with which even his own family regarded his race. (Ironically, in 1923, a U.S. Supreme Court decision restricted South Asian access to citizenship precisely "on the ground that Indians were, in fact, not white," writes Desai.)

Still, for many African-Americans, not being perceived as black was enough at the time — especially those in Kramer's last and most elusive category, but one he thinks was most common.

These were African-Americans who took on this "foreign" avatar not to make a point about segregation, and not to become famous TV personalities, but to avoid everyday discrimination.

The turban made them incognito. "The whole point," says Kramer, "was to kind of wage a whole guerrilla war that would go unseen."

By putting on the turban, they stepped over the color lines put in place by Jim Crow, and walked right into what was then a racial unknown.