Accessibility links
Why An African-American Sports Pioneer Remains Obscure : Code Switch The story of Alice Coachman Davis, who died last week, offers plentiful reminders about mid-century attitudes on race and gender. But ultimately, her story is about transcending all that. 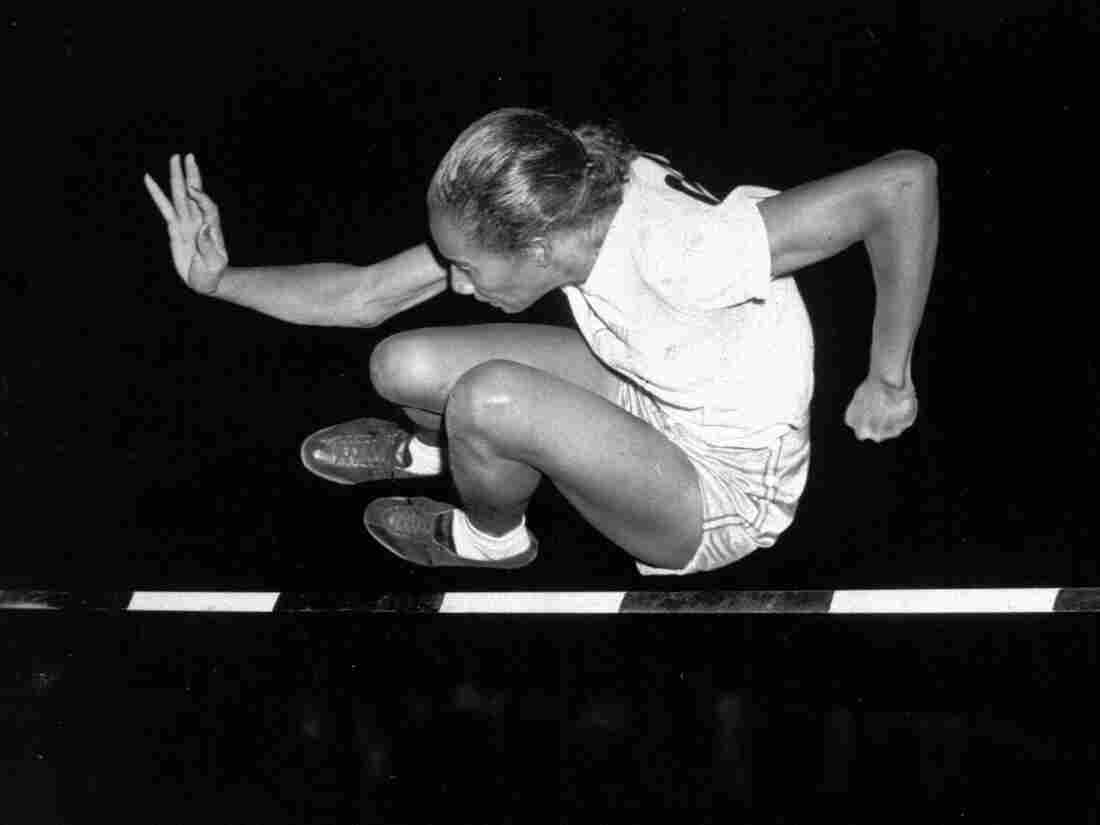 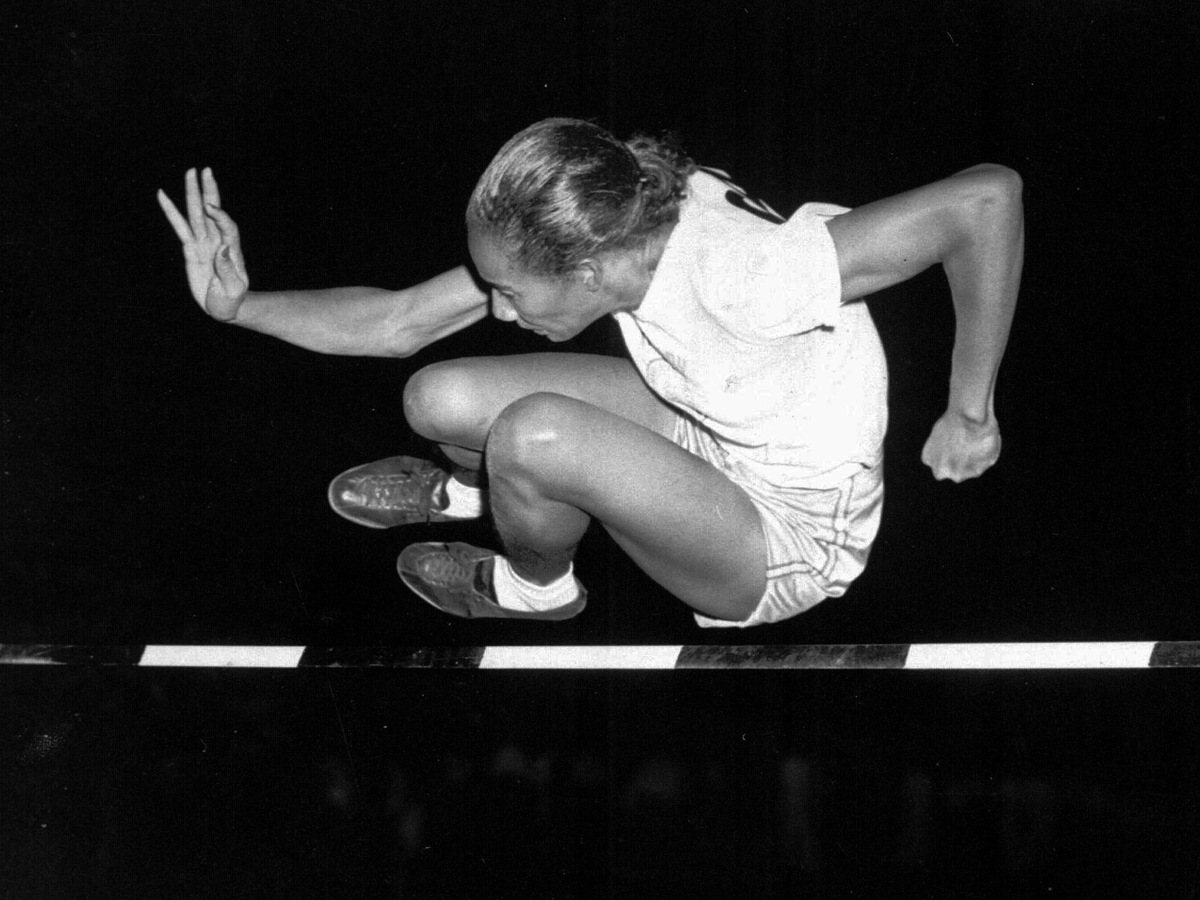 Alice Coachman clears the bar at 5 feet to win the running high jump at the Women's National Track Meet in Grand Rapids, Mich., in 1948.

Alice Coachman Davis never entered the pantheon of breakthrough African-American sports heroes, like Jesse Owens or Wilma Rudolph. But she was a pioneer nonetheless.

In 1948, competing as Alice Coachman, she became the first African-American woman to win Olympic gold, breaking the U.S. and Olympic records in the high jump.

Chances are, you've never heard of her. Davis died on Monday at age 90 from cardiac arrest.

"It was because of her self-confidence, her ability to push through, that made the neglect feel all the more hurtful," says Jennifer Lansbury, author of A Spectacular Leap: Black Women Athletes in Twentieth Century America. 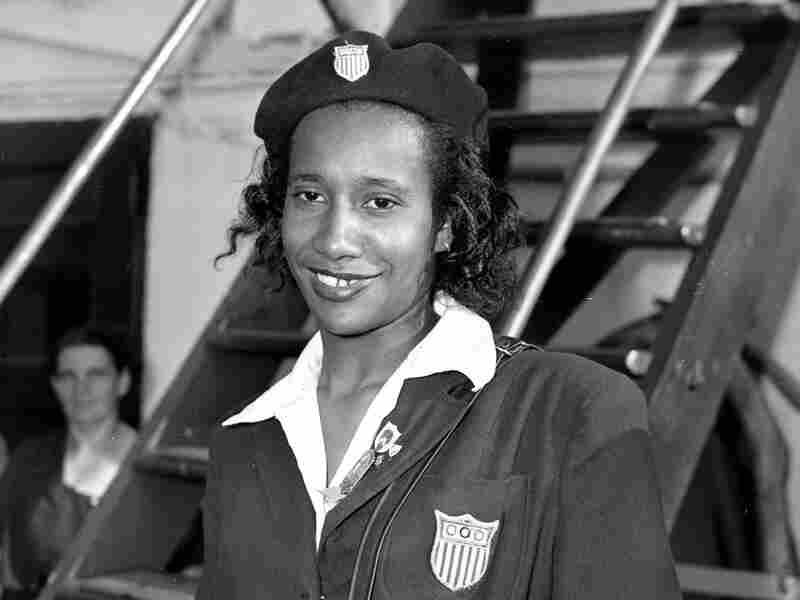 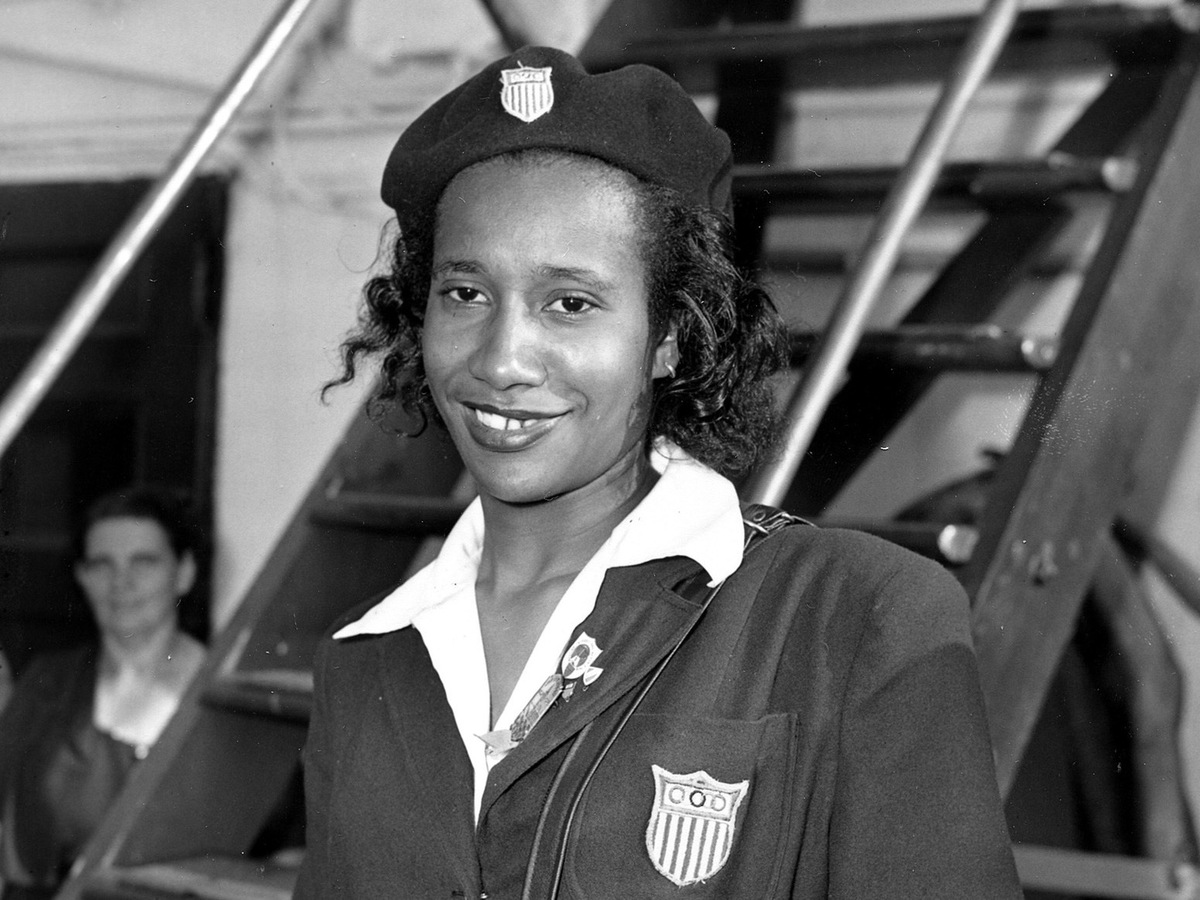 Coachman wasn't encouraged as a child. In her day, it was considered questionable for women to compete in track and field — as opposed to more "feminine" sports such as swimming or tennis.

"There were some stereotypes that were very prevalent," says Gary Sailes, a sports sociologist at Indiana University. "If you participate in sports, it could affect your ability to have a baby. The lesbian thing was out there."

These were attitudes apparently shared by Coachman's father. "Her father believed that girls should be dainty and sit on the porch and drink tea and not do sports," says Heather Lang, author of a children's book about Coachman.

In a 2004 interview with NPR, Coachman said the fact that female athletes were discouraged ultimately helped her out.

Coachman grew up poor in Georgia, often running and jumping barefoot, sometimes using ropes or tied-up rags for crossbars as she practiced her jumps.

Coachman was discovered, though, at a meet at Tuskegee Institute. She went on to win the national championships in the high jump 10 years in a row.

She was only an Olympic champion once, however. The games were canceled in 1940 and 1944 due to World War II, cheating her of her turn to compete in her prime.

Coachman and many others believed she would have become a repeating champion, if she'd had the chance.

"Had she competed in those canceled Olympics, we would probably be talking about her as the No. 1 female athlete of all time," Eric Williams wrote for the Black Athlete Sports Network.

Coachman was awarded her gold medal in London by King George VI. She was the only American woman to win a gold medal in athletics at those games.

"To come back home to your own country, your own state and your own city, and you can't get a handshake from the mayor? ... Wasn't a good feeling."

But her hero's welcome back home in Albany, Ga. — a segregated event where the mayor refused to share her hand — was bittersweet.

"To come back home to your own country, your own state and your own city, and you can't get a handshake from the mayor?" Coachman said in the NPR interview, which was conducted by the National Visionary Leadership Project. "Wasn't a good feeling."

Lansbury, an independent historian, says the event has to be remembered in the context of the times. Albany's reception may not have represented a civil rights breakthrough, but declaring a day and holding a parade in her honor was something quite unusual for a southwestern Georgia city in the late 1940s.

"For them to put a picture of her on the front page of the Albany Herald was not done and had not been done," Lansbury says.

The 1948 Olympics were her last competitive event. A dozen years later, she watched Wilma Rudolph, who recovered from infantile paralysis caused by polio to win three gold medals in Rome in 1960.

Rudolph became a hugely celebrated figure who helped elevate the popularity of women's track in the U.S. Her homecoming celebration in Clarksville, Tenn., was, at her insistence, that city's first integrated event. 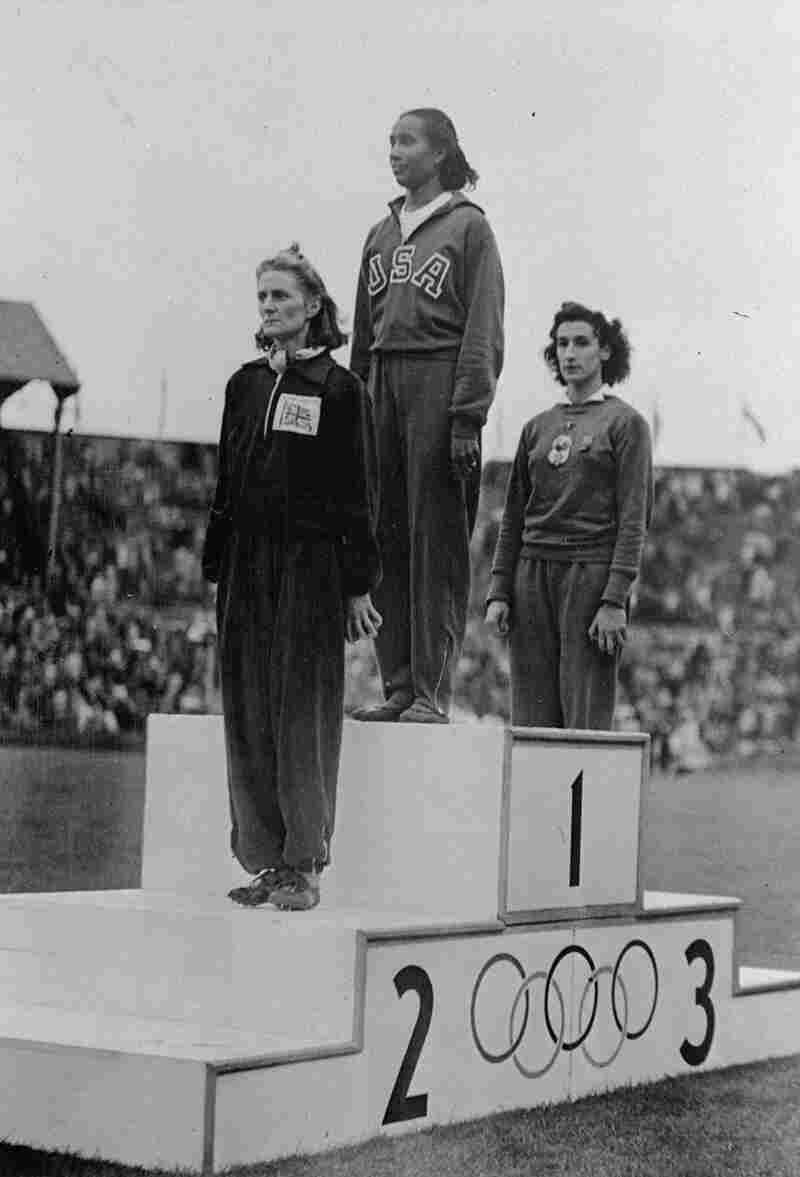 Alice Coachman stands on the winner's section of the Olympic podium at Wembley Stadium in 1948. AP hide caption 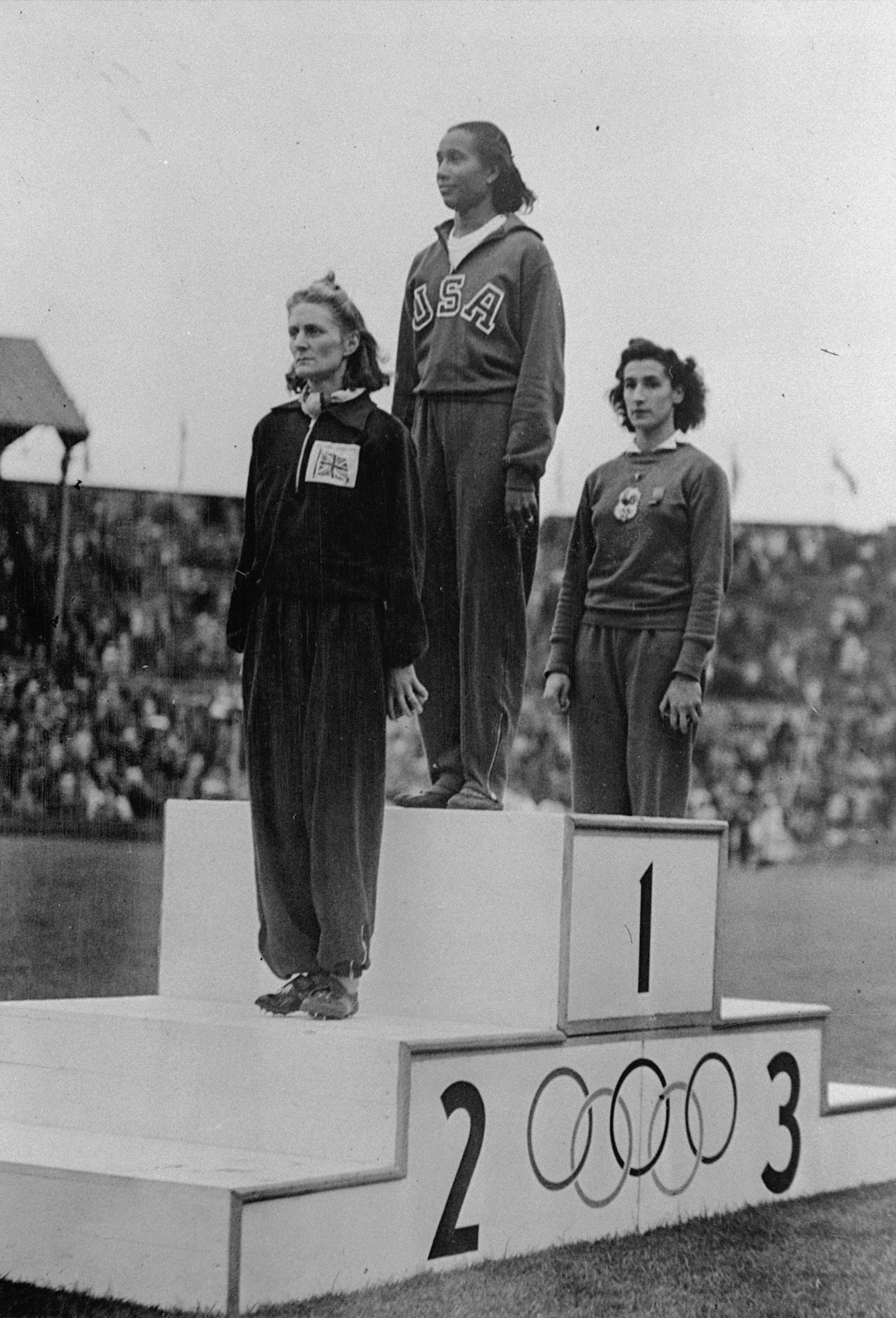 Alice Coachman stands on the winner's section of the Olympic podium at Wembley Stadium in 1948.

In those few crucial years, the civil rights environment and racial attitudes had shifted enough for Rudolph to be lauded in a way that wasn't possible for Coachman.

"Sometimes, it's just about somebody being the right person at the right time," Lansbury says. "I really feel that with Wilma Rudolph, there was a convergence of her personality and where civil rights was at that point in time when she competed."

Coachman herself attributed Rudolph's greater fame to the spread of television. There's something to that, and Coachman never begrudged Rudolph her triumph. But she couldn't have been thrilled when Rudolph, in her autobiography, attributed the first Olympic gold medal to another African American woman entirely.

Books and articles kept appearing that credited Rudolph herself with being the first African-American woman to earn Olympic gold.

"Her students said, 'You said you were the first one,' " Lansbury says. "It wasn't until she brought her medal in the next day and showed it to them that they believed she was the first."

Coachman did receive some recognition in her later years, founding a track and field foundation at age 70 and being inducted into the U.S. Olympic Hall of Fame at 80.

She never doubted her own contribution.

"I made a difference among the blacks, being one of the leaders," she told The New York Times in 1996. "If I had gone to the games and failed, there wouldn't be anyone to follow in my footsteps."

Sailes, who teaches African-American studies and kinesiology at Indiana, says that Coachman's confidence helped her put aside all the slights in her life.

"She had a higher agenda than dealing with dealing with the racial polarization," Sailes says. "She rose above it by focusing on the work and what she needed to accomplish."