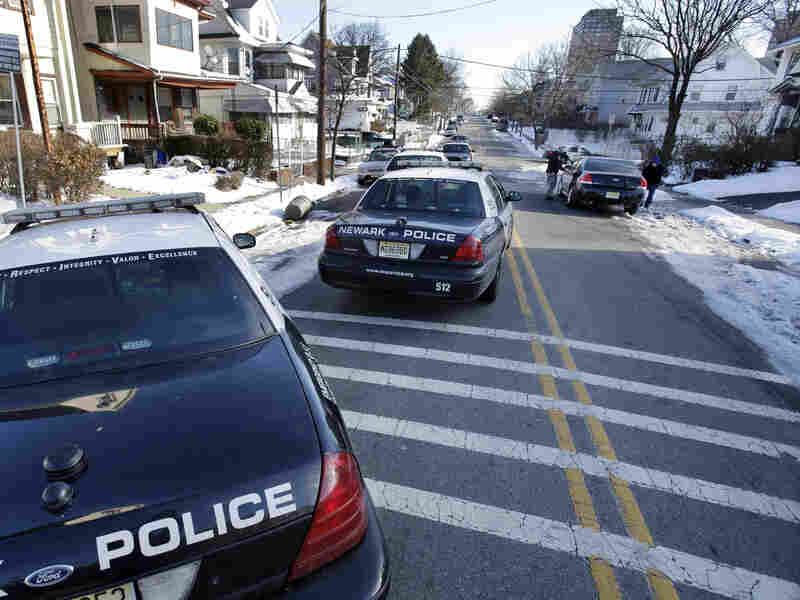 A federal investigation found that most pedestrian stops by Newark police officers were unconstitutional. The study also found a pattern of excessive force and theft by the city's officers. Mel Evans/AP hide caption 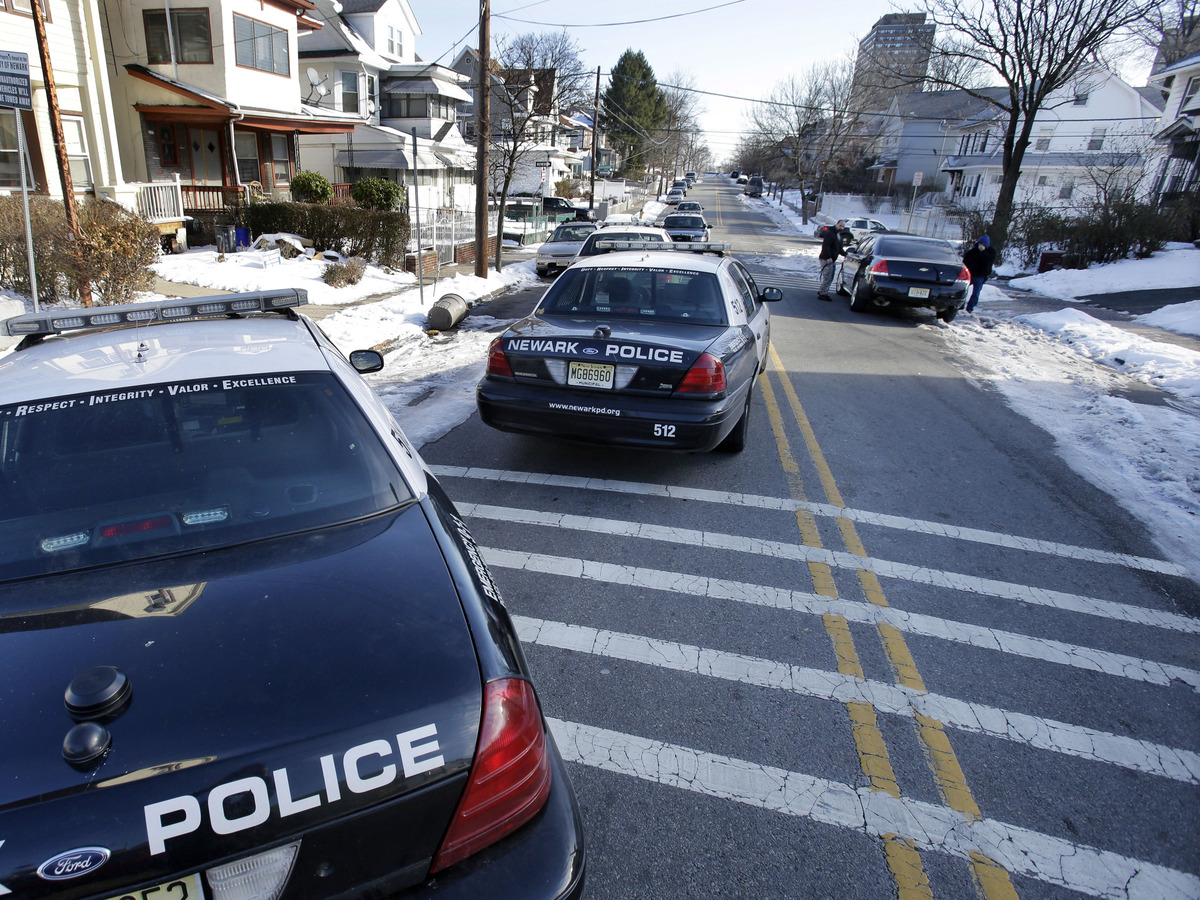 A federal investigation found that most pedestrian stops by Newark police officers were unconstitutional. The study also found a pattern of excessive force and theft by the city's officers.

The past few days have brought a whole lot of important (and pretty sobering) news around race and policing. Here are some of the biggest stories that have landed on our radar.

Three-quarters of all stops by Newark police deemed unconstitutional

The tensions between residents and the police in Newark, N.J., are long-running. Like a bunch of other big cities in New Jersey, Newark has laid off a big chunk of its police force in recent years, and violent crimes, like carjackings, have been climbing. Some police say they are overworked. But many civilians have complained that they are regularly subjected to police harassment and mistreatment.

Just a few weeks after the Department of Justice announced that it was assigning a federal monitor to the police department of Newark, N.J., federal officials released findings from a years-long investigation that details civil rights violations and the use of excessive force on a systemic scale.

"The investigation found that city police officers had no constitutional basis for 75% of the pedestrian stops they conducted in recent years. It also determined that officers often used excessive force during arrests but underreported the level of force used. [...]

The federal investigation detailed longstanding and institutional misconduct, including retaliatory arrests "for behavior perceived as insubordinate or disrespectful to officers," according to the documents. Officers also routinely stole from suspects, and Newark's stop and arrest tactics both unfairly targeted blacks, according to the report."

Although black people made up just over half of the city's population in 2010, they accounted for 85 percent of all traffic stops and 8 in 10 arrests over the period that the Justice Department was investigating. The inquiry also said that blacks were 2.5 times more likely to be stopped by police, 2.7 times more likely to be searched, and 3.1 times more likely to be frisked than whites were, even as the likelihood of finding evidence during a stop or frisk was essentially the same for both groups. (From the report: "Thus, not only are the unconstitutional stop practices of the NPD falling most heavily on black individuals, but those massively additional stops are not yielding more evidence of crime. In other words, the stops are both impermissible and ineffective. These racial disparities characterized every one of the NPD's policing precincts.") (You can read the whole report here.)

"Our investigation uncovered troubling patterns in stops, arrests and use of force by the police in Newark," Attorney General Eric Holder said in a statement. "With this agreement, we're taking decisive action to address potential discrimination and end unconstitutional conduct by those who are sworn to serve their fellow citizens."

Meanwhile, Anthony Campos, Newark's police chief, said that it wasn't yet clear what, if anything, would happen to the police officers who were found to be involved in the violations documented in the report. 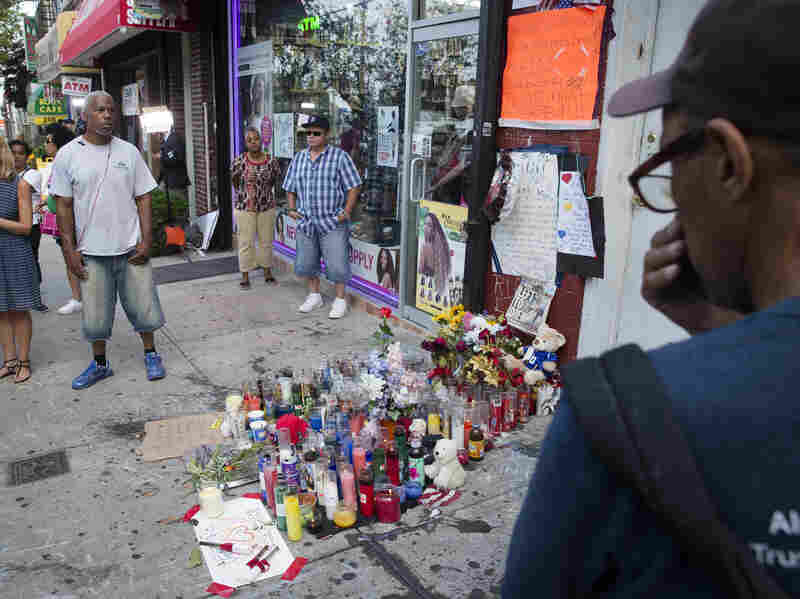 Pedestrians stand beside a memorial for Eric Garner, a Staten Island man who died while being arrested by New York City police. John Minchillo/AP hide caption 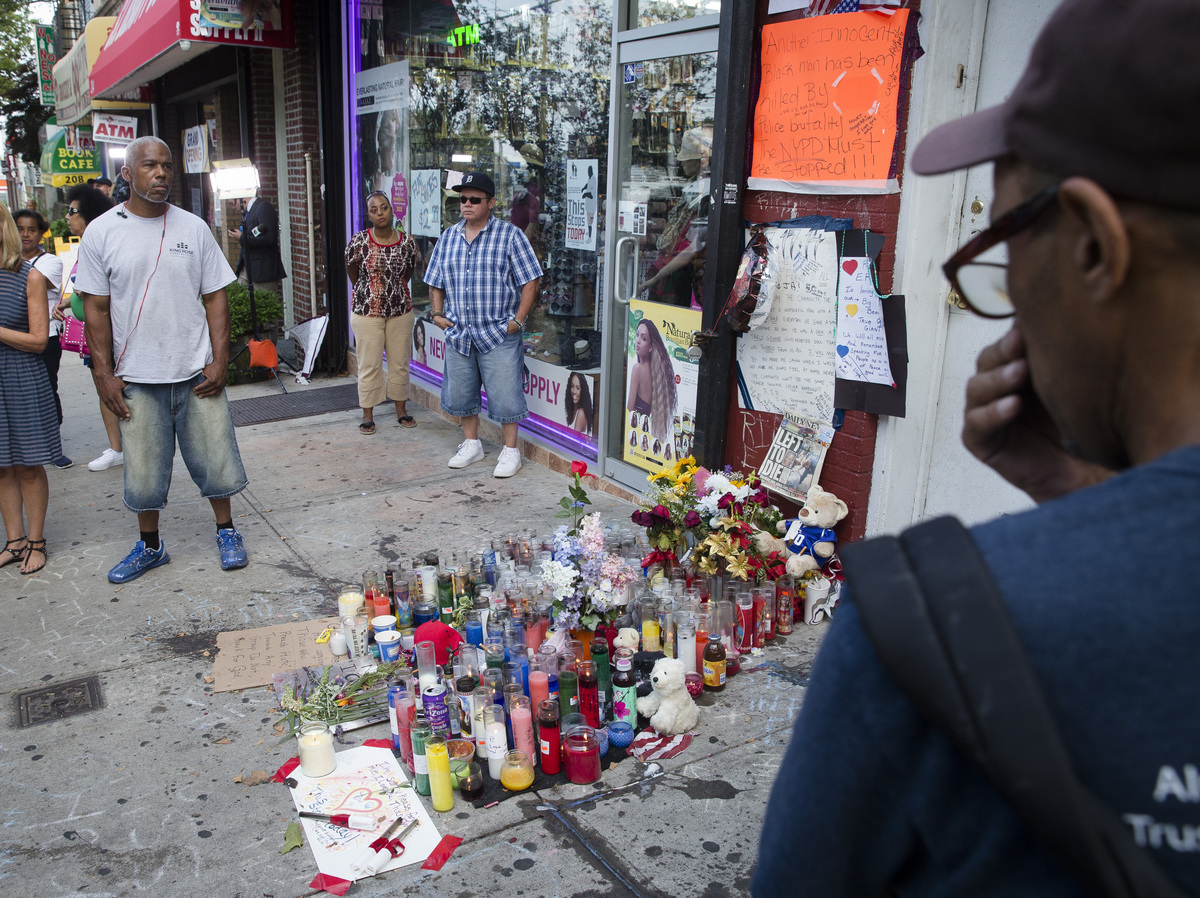 Pedestrians stand beside a memorial for Eric Garner, a Staten Island man who died while being arrested by New York City police.

A seven-minute video that captured the death of Eric Garner, a New York City man who died after a confrontation with the police, was wildly shared over the Internet over the past week, and reignited old debates about race and police brutality in the city.

The cellphone video, which has been viewed hundreds of thousands of times, shows Garner arguing with police officers. One of the officers who attempted to subdue Garner appeared to put him in a chokehold, before several other officers wrestled Garner to the ground. Garner can be heard yelling, "I can't breathe!" over and over, before he eventually falls silent. (You can see the video of the encounter here. Fair warning: It is very disturbing.)

The police officer who initially grabbed Garner has been removed from duty pending the conclusion of the investigation, and the EMS workers who were on the scene and who did not appear to treat Garner as he lay on the ground were placed on "modified duty." A police officers union official called the moves "completely unwarranted" and "kneejerk reactions for political reasons and nothing more."

Witnesses on the video and those quoted in The New York Times say that Garner was trying to break up a fight, which is what drew the police's attention. Garner, who was reportedly 6-foot-3 and 350 pounds, suffered from diabetes and asthma, and had been arrested dozens of times for selling "loosies" — unpackaged, individual cigarettes cheaper than the taxed ones sold at bodegas and convenience stores — to passersby on the street. The Times reported that he started hawking loosies after his health made it impossible to keep his job in the city's parks department.

For years, Garner chafed at the scrutiny by the police, which he considered harassment. In 2007, he filed a handwritten complaint in federal court accusing a police officer of conducting a cavity search of him on the street, "digging his fingers in my rectum in the middle of the street" while people passed by.

More recently, Garner told lawyers at Legal Aid that he intended to take all the cases against him to trial. "He was adamant he wouldn't plead guilty to anything," said Christopher Pisciotta, the lawyer in charge of the Staten Island office of Legal Aid.

As my Code Switch teammate Hansi Lo Wang noted, the New York Police Department has had a long, fraught history with residents in many black and Latino neighborhoods. Garner's death is the latest of several high-profile cases in recent memory in which an unarmed black man has died in an encounter with the New York City police — Amadou Diallo, Patrick Dorismond, Sean Bell, Ramarley Graham.

The scheme they were set to go to prison for went like this: A man introduced the three defendants to a drug courier who said wanted to rob the stash house and wanted to steal what was inside from his superiors. The courier asked the three men to participate in the plot and earn themselves a big score.

But the man who made the intro was a government informant, and the courier was actually an undercover agent from the Bureau of Alcohol, Tobacco, Firearms and Explosives. The stash-house, too, was set up by federal agents. None of the three defendants had previous robbery offenses.

Although the defendants had already pleaded guilty to the charges, but Judge Real wasn't having it. "[The] government created this fictitious crime from whole cloth," Real told government lawyers during the sentencing phase.

"The government provided the plan of this fictitious crime when undercover ATF Agent Carr insisted on running through a script to ensure a conspiracy had been hatched and that Carr also provided the getaway car with the fictitious conspiracy.

"Further, there was no evidence that the defendants even knew of the location of the fictitious stash house or could have any ability to check the stash house as to whether or not it was other than as represented by Agent Carr as being part of the stash house that he participated in, in fact. Which was a lie and a falsehood to start this whole conspiracy."

Brad Heath of USA Today has been writing about the use of these stings, which have become a growing weapon in the government's prosecution of the drug war. Heath reports that there are several lawsuits in federal courts that claim that these kinds of stings are tantamount to entrapment and don't pass constitutional muster.

On Monday, USA Today published an investigation of these types of investigations and found that the overwhelming majority percent of the people targeted in them are black or Latino.

"At least 91% of the people agents have locked up using those stings were racial or ethnic minorities, USA TODAY found after reviewing court files and prison records from across the United States. Nearly all were either black or Hispanic. That rate is far higher than among people arrested for big-city violent crimes, or for other federal robbery, drug and gun offenses.

"The ATF operations raise particular concerns because they seek to enlist suspected criminals in new crimes rather than merely solving old ones, giving agents and their underworld informants unusually wide latitude to select who will be targeted. In some cases, informants said they identified targets for the stings after simply meeting them on the street."

But ATF officials denied that they were targeting people of color. "There is no profiling going on here," Melvin King, an ATF official, said. "We're targeting the worst of the worst, and we're looking for violent criminals that are using firearms in furtherance of other illegal activities."