Accessibility links
In Chicago, Neighborhoods That Are More Black Don't Gentrify : Code Switch A recent study reviewed places in Chicago that seemed to be undergoing gentrification two decades ago and found that the process had slowed or stopped for those that were at least 40 percent black.

So here's one way folks tend to think about gentrification in big cities: Poorer (therefore: browner) neighborhood becomes more attractive to folks of more means (therefore: whiter) who are in search of lower housing costs. As more and more better-off folks move in, new amenities and fresh investment follow. And that, in turn, brings more demand for the neighborhood among potential gentrifiers, which pushes up housing costs and drives out the people of color who lived there before.

A new study by Harvard researchers suggests that there's also a racial ceiling to how neighborhoods gentrify, at least in Chicago, the city they examined. Robert Sampson and Jackelyn Hwang found that neighborhoods that are more black tend to stay that way. 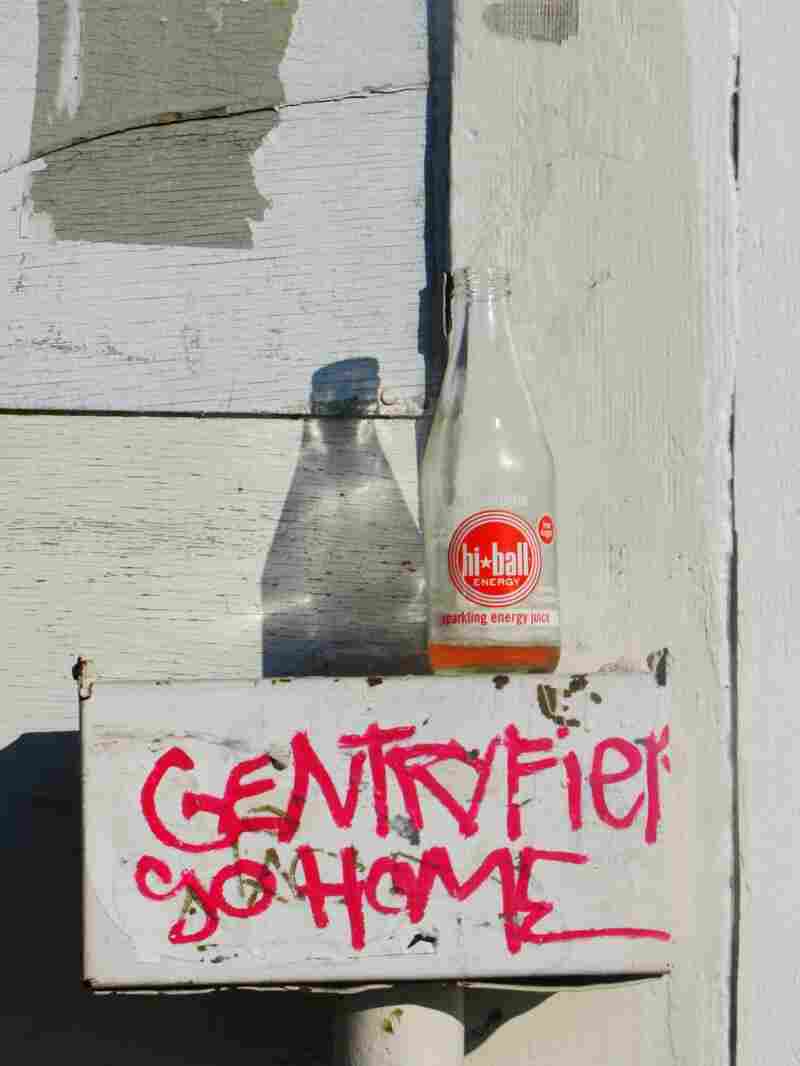 The researchers found that most neighborhoods in Chicago that have seen dramatic gentrification are neighborhoods that were not predominantly black. Darwin Bell/Flickr hide caption 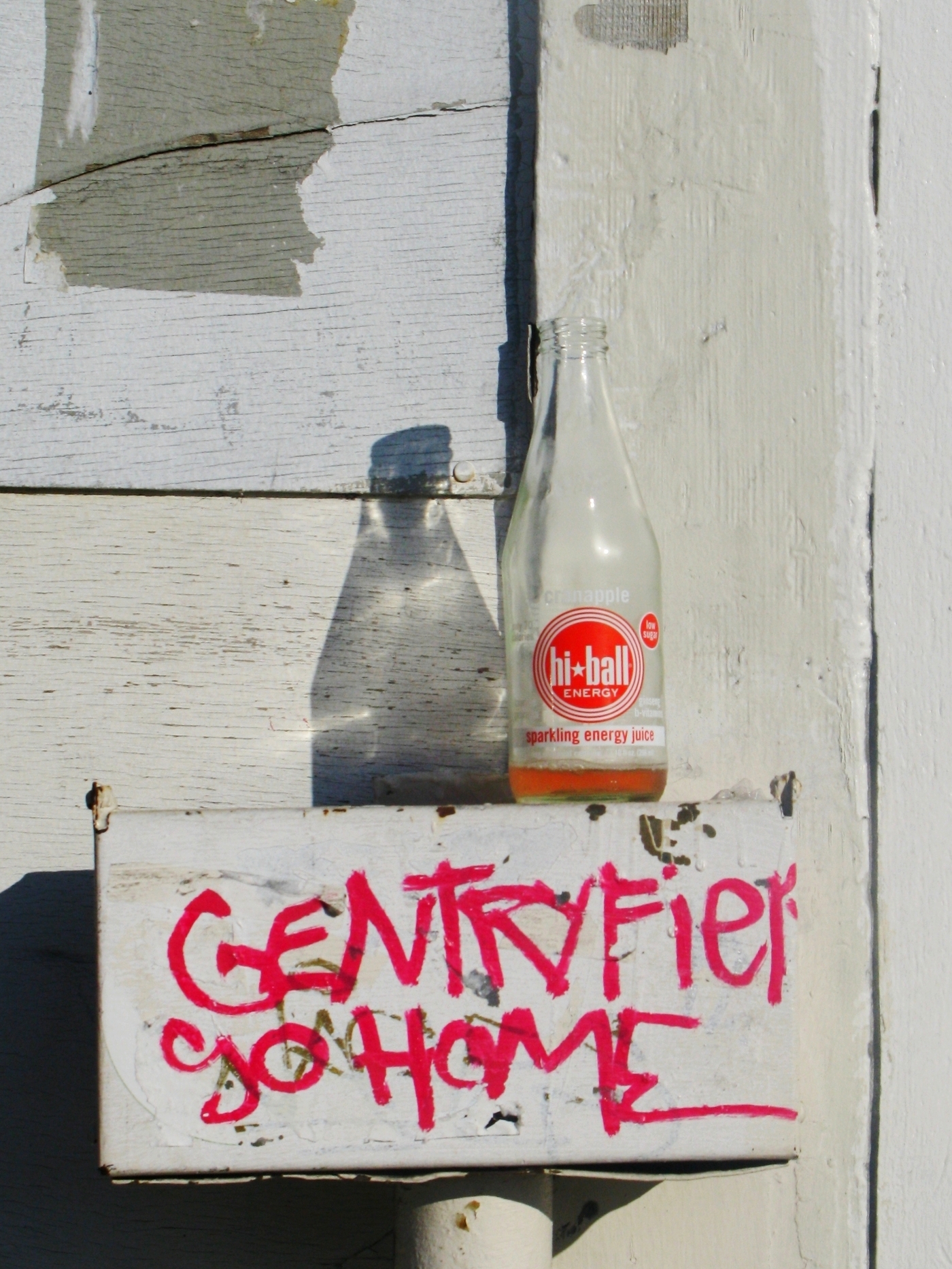 The researchers found that most neighborhoods in Chicago that have seen dramatic gentrification are neighborhoods that were not predominantly black.

"It used to be referred to as 'white flight,' " Sampson said, referring to the postwar years in which whites left big cities as more blacks moved into them. "But we refer to it in the paper as 'white avoidance' — [gentrifiers are] not moving into neighborhoods where there are lots of black people. In Chicago, the [neighborhoods] that are gentrifying are the ones where there was a white working class, or Latinos, but not many blacks."

The researchers started with earlier data showing neighborhoods that appeared to be undergoing gentrification. But when they looked at those same areas more recently, they found that in areas where the population was 40 percent black, that gentrification seemed to grind to a halt.

Indeed, Sampson said that many of the neighborhoods that have become synonymous with gentrification — like the Williamsburg section of Brooklyn — actually underscore their study's findings. That neighborhood has a reputation of being a hive of hipsters who moved in and displaced all the black people who lived there before. But before it gentrified, the neighborhood actually boasted a sizable Polish-American working class and a large Latino population, while its black population had always been very small. (It was about 7 percent in 1990.) Sampson said the Bed-Stuys and Harlems of the world — heavily black urban neighborhoods that have seen lots of whites move in — are outliers, not the rule.

The researchers used a novel method of qualitative research to determine how much change a neighborhood had experienced — a mix of census data, surveys of thousands of Chicago residents, and Google Street View:

"The new research builds on a 1995 study that examined gentrification trends in nearly two dozen cities across the country, including nearly half of the census tracts in Chicago. The earlier study categorized census tracts according to how gentrified they were[,] based on how much visible reinvestment they were seeing.

"To examine whether those trends had continued, Hwang and Sampson targeted areas that had earlier been identified as gentrified and adjacent census tracts, and began using Google Street View to examine them in painstaking detail."

From Google Street View, the researchers gathered visual evidence of hundreds of blocks around Chicago. They tagged evidence of new construction, renovations of existing homes, public improvements, and signs of "disorder" like graffiti or litter.

Hwang said that they controlled for things like poverty, the amount of public housing, and availability of public transit, which showed that race was a key factor in how much change a neighborhood saw. That's pretty consistent with other research on race and housing, she said.

What's really happening is that the neighborhoods that could use some reinvestment and renewal aren't even being touched.

As Ta-Nehisi Coates' blockbuster story on reparations exhaustively outlined, Chicago has a particularly sordid history when it comes to race and housing. The city's policies and their consequences have contributed to deep levels of residential segregation there, and Sampson said that history continues to shape the way Chicagoans think of different neighborhoods.

Hwang said that also means that the same neighborhoods that saw massive disinvestment when they became mostly black and poor are not benefiting from the waves of new construction and new businesses that gentrification necessarily brings along with it. "What's really happening is that the neighborhoods that could use some reinvestment and renewal aren't even being touched," she said.