Accessibility links
In Ferguson, Mo., A City Meets The Spotlight : Code Switch To locals, Ferguson is part of St. Louis, not a separate place. And as residents wonder whether or when their lives will return to normal, the question remains: What will they do after it does? 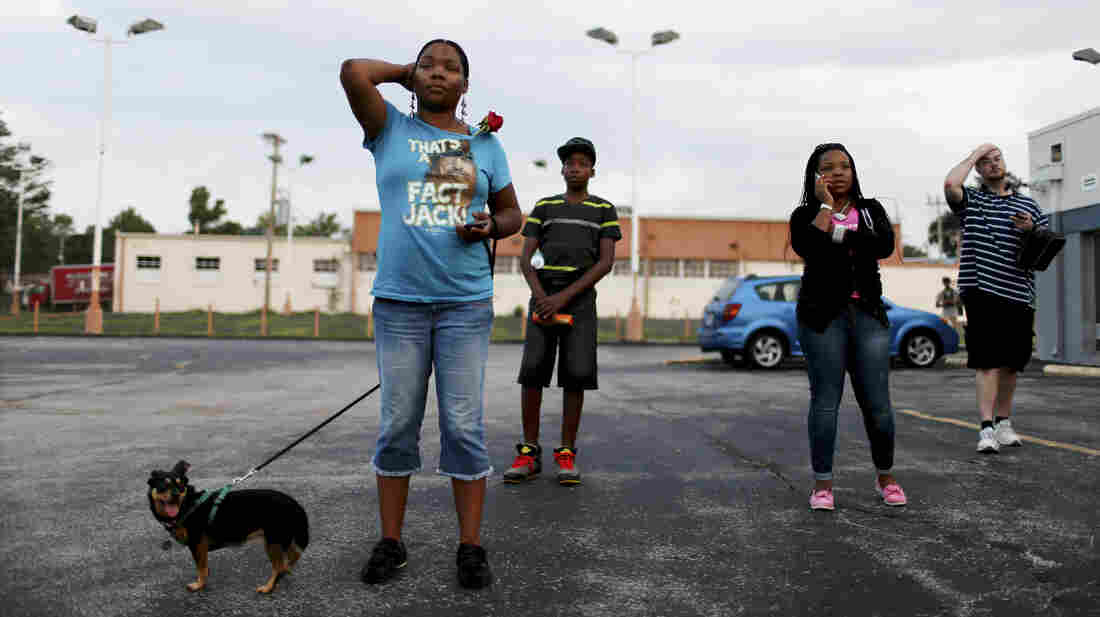 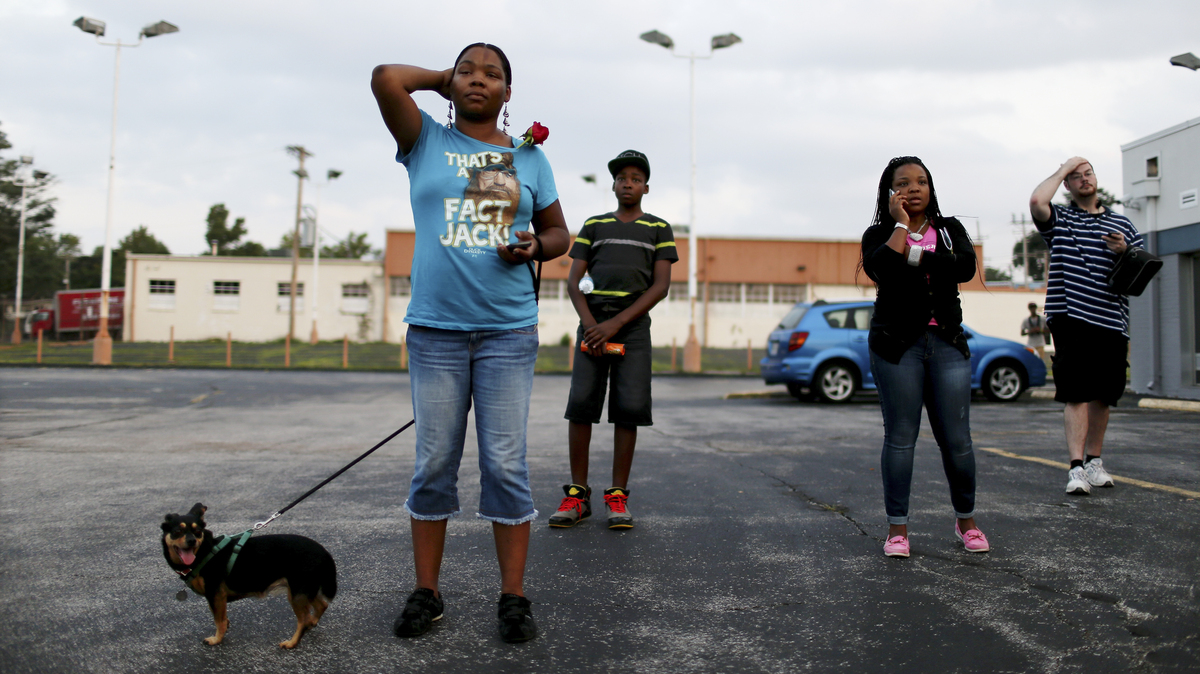 Etefia Umana says that Ferguson, Mo., is in some ways a media fiction.

We're sitting in the offices of Better Family Life, an organization that provides social services to people in the area. Umana chairs its board and lives in Ferguson.

It's not that the municipality of Ferguson doesn't exist — it has a mayor, a school board, and what is now a nationally scrutinized police force. But to a lot of the folks who live in Ferguson, it may as well just be St. Louis, the city that abuts them and that gives their county its name. Ferguson is so small, and St. Louis so close, that you might drive into the city and not even know you'd crossed a border.

So struck Umana as odd that the story of the shooting of Michael Brown, and the subsequent confrontations between police, had mobilized so much activist energy; indeed, over and over, folks have told me that St. Louis doesn't have a history of civil disobedience, especially around issues of race. 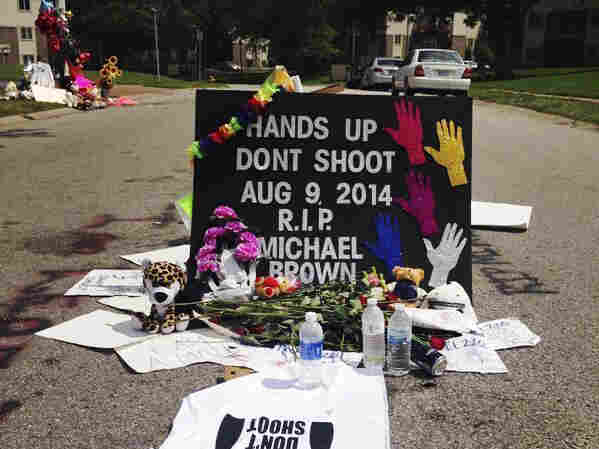 A makeshift memorial to Brown near the spot where he was shot and killed by a police officer. Gene Demby/NPR hide caption 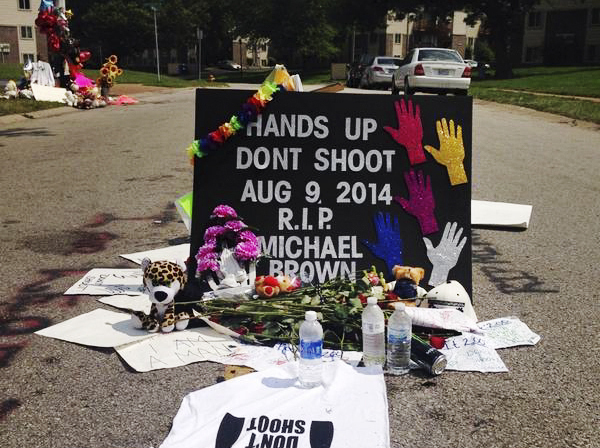 A makeshift memorial to Brown near the spot where he was shot and killed by a police officer.

"I think the fact that St. Louis is the catalyst for a nationwide conversation is highly ironic," Umana says. "It's not where St. Louis typically is."

The same day I spoke to him, an editorial in the St. Louis Post-Dispatch about the relative inactivity around racial issues in the region — it's one of the most segregated metro areas in the country — made pretty much the same claim. "We are the descendants of those who stayed behind when bolder people opened the West," it reads, echoing the local columnist Bill McClellan. "Complacency is in our marrow."

But the hullabaloo — international media, National Guard, federal agents — has upended the lives of Ferguson's residents. As Umana and I talk, word comes from his wife that the police are starting to shut down the streets near their house, and that he should head home soon.

His son, also named Etefia, is back home from college for the summer. He says they would need valid identification, with an address that shows they live in the area, to get past the checkpoints after a certain hour.

And what if you don't have it? I ask.

"Then you're S.O.L," the younger Etefia says.

Over on Canfield Drive, the street where Michael Brown was shot, Cherethia Saulsberry says it usually takes her about five minutes to get out of the subdivision to get on the road to work. Now, because of the checkpoints and the traffic, it takes her a half-hour. She's been sitting outside on a chair on the sidewalk, near a makeshift memorial for Michael Brown in the middle of the street. The memorial rests on the spot where he died.

One dude walks up to Jesse Jackson and daps him up. 'Reverend Al!' he says. 'What up!' Everyone snickers. Jackson does not correct him.

There isn't a lot of street traffic when my colleague Shereen Marisol Meraji and I are there. The cars that roll by have to slow down and hug the curb to get around the shrine, and many honk in solidarity. There are a few dozen folks milling around on this absurdly humid day. Members of Alpha Phi Alpha, a black fraternity, are chatting folks up, registering people to vote. And there's Jesse Jackson.

One dude walks up to Jackson and daps him up. "Reverend Al!" he says. "What up!" Everyone snickers. Jackson does not correct him.

There are some tables with Better Family Life workers handing out water and food and, offering counseling services. "The people here saw a man's body lying in the street for four hours," one worker who identified himself as Bishop V-Luv tells me. I don't care who you are, he says. That does something to you.

Saulsberry agrees with what other folks say: This is not the kind of place where people protest. I ask her what it's like, then, to have all this activist energy suddenly cohere in her neighborhood.

"It makes me scared" — because of the tear gas and rubber bullets — "but also proud," she says. 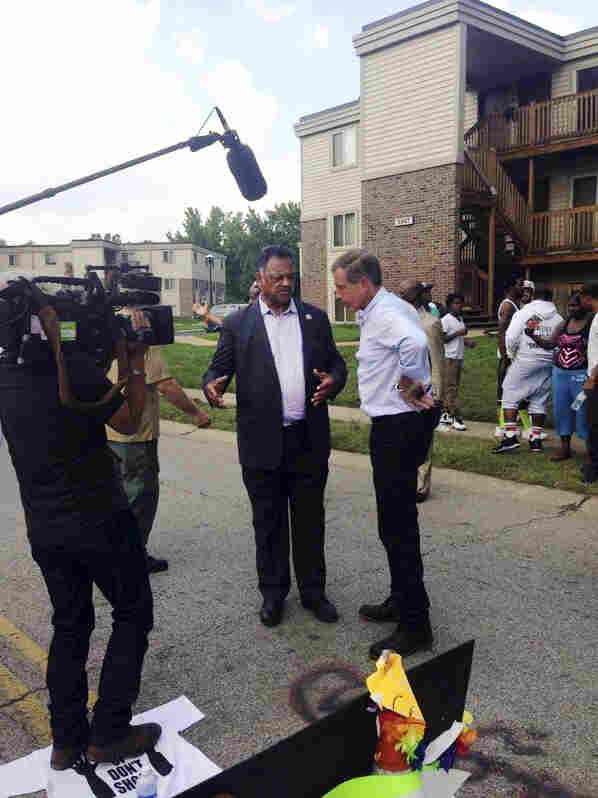 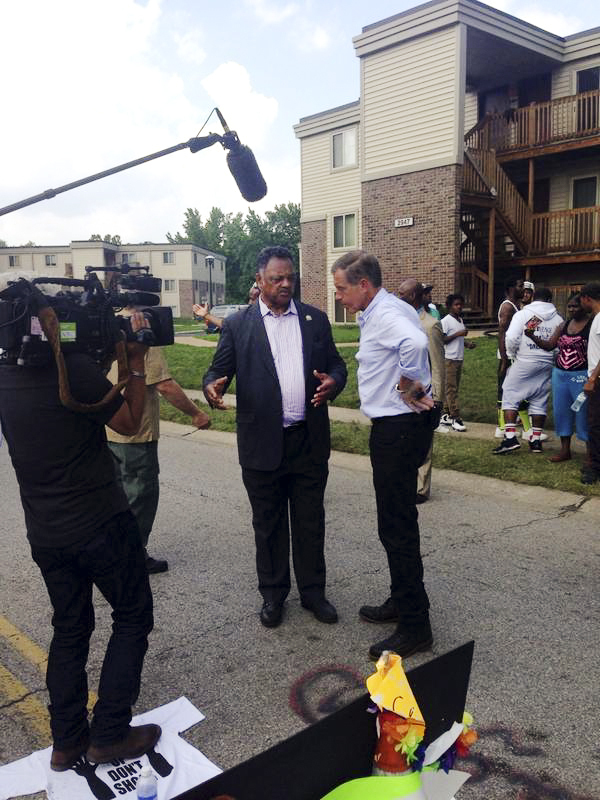 As we talk, more people begin to trickle onto Canfield. Some of them take pictures of the makeshift memorial. They are mostly under 30, it seems.

Saulsberry tells me about her daughter Mya Canty, who just graduated from Missouri's Culver-Stockton College and who spent part of the last semester in California with Angela Davis. The tragedy in Ferguson has activated young people like her, Saulsberry says.

On cue, Mya materializes, holding a sign. "I never thought I'd have to practice civil disobedience so soon," she says. She's been at most of the rallies and protests. "If I'm not at work, I'm out here in these Ferguson streets."

Though everyone is exceedingly polite on Canfield, folks say there are some tensions. "There's a generational divide," says Demetrius Upchurch, a high school teacher from a few towns over who's here with his 4-year-old son, Aiden. He's visiting some family; his 85-year-old grandfather lives near the street where Michael Brown was killed. Upchurch says his grandfather is scared by the unrest. "Old people don't understand younger people, and younger people don't understand older people." And there weren't a lot of older people on the streets.

Upchurch says he tries to keep it real with his students about the police, and lets them know they can talk to him. He tells us a story from a few months back about how his son and fianceé saw him roughed up and thrown on the ground by some local police officers. His son was crying throughout the encounter. After that, he told his son there are good cops and bad cops, and he lets him know that despite stuff like this, he can grow up and be whatever he wants to be. He asks Aiden what he wants to be when he grows up. Aiden, who had seconds ago been jumping around, suddenly looks embarrassed to be on the spot. "A good police," Aiden says softly, before burying his face in his dad's leg.

It seems a lot of people here have stories about the police. Uphchurch says it's important for civic leadership to come from the generations raised on hip-hop, "not just some old Christian pastor who was around when Martin Luther King was around." The allusion to Jackson is not missed.

But the hip-hop generation is here, too, of course. J. Cole, whose song "Be Free" — a response to Michael Brown's killing — has been getting passed around since he posted it on his blog. He shows up a little later on Canfield in a spiffy custom van with a black Navigator up front, probably for security. A crowd gathers around him. Cole has gotten some props for being present but not courting the spotlight, and here he's mostly chatting folks up and talking. (Cole happens to be Mya's favorite rapper, and she freaked out when she got to meet him a few days before. "That made your superficial love for him more real?" Saulsberry asks her daughter. "Um, my love is not superficial," Mya says.)

Everyone on Canfield is exceedingly friendly. But people say the vibe in Ferguson changes completely after dark now, when the police are out in more force, and tensions start to flare up. Bishop V-Luv tells me that after those standoffs between the police and the people who are out marching, the folks in the neighborhood clean up the next morning.

"Eventually the television cameras and news reporters left Dallas and New Orleans," the Post-Dispatch editorial says. "They will leave St. Louis, too, along with the visiting civil rights firemen, the outside hell-raisers and the self-anointed experts. The ubiquitous #Ferguson hashtag will fade. We will be left to work this out on our own."

Brian Williams of NBC News shows up, boom mic and camera crew in tow. People gather around to take pictures. As Jackson and Williams talk — Jackson explicating, using his hands, Williams head down, listening, brow furrowed — I snap a photo of them talking.

It wasn't until later that I noticed the cameraman was stepping on the memorial for Michael Brown.