Accessibility links
To Pitbull's Fans Around The World, 'Dale' Is A Way Of Life : Code Switch A word of encouragement or demand in Spanish meaning "go ahead" or "give it,"dale is the Cuban-American rapper's semi-official slogan, his perpetual hashtag, his "YOLO," if you will.

In our semi-regular Word Watch feature, we take a look at a word or phrase that's caught our attention, whether for its history, usage, etymology, or just because it has an interesting story.

Miami rapper Pitbull has become a forceful presence on social media, with teenagers and music lovers of diverse ethnicities mimicking and mocking his bilingual swag, particularly his frequent use of the Spanish word dale. 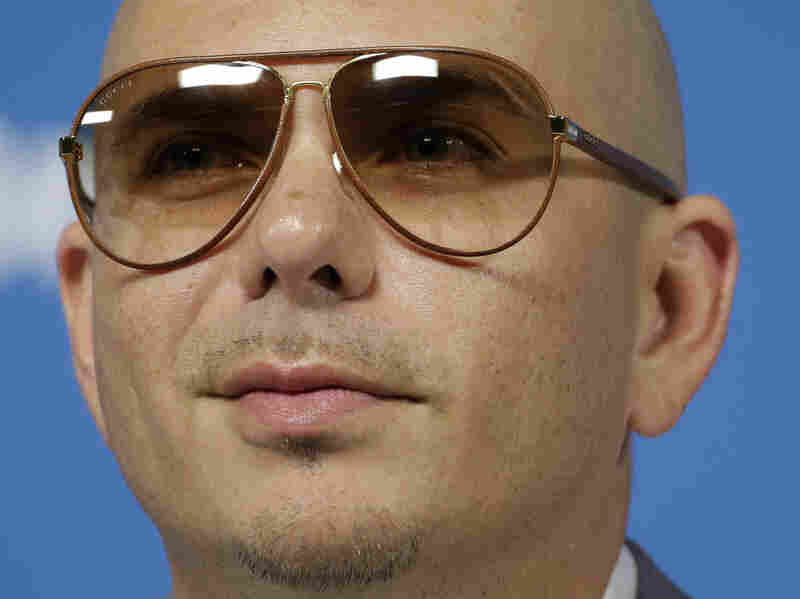 Cuban-American rapper Pitbull has popularized the Spanish expression "dale" among fans all over the world, including non-Spanish speakers. Felipe Dana/AP hide caption 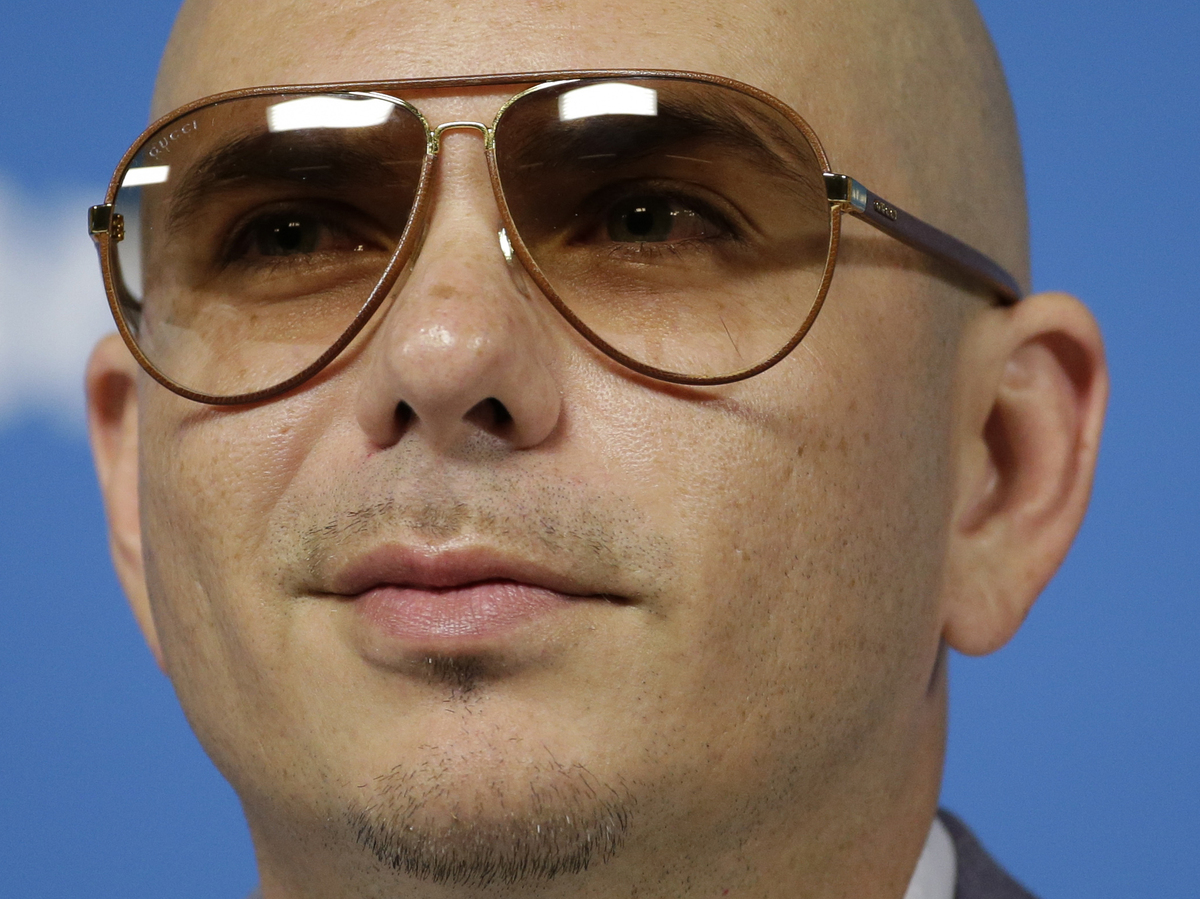 Cuban-American rapper Pitbull has popularized the Spanish expression "dale" among fans all over the world, including non-Spanish speakers.

It's unclear if Pitbull fans know the origins of his catchphrase, but that hasn't stopped them from turning it into a popular hashtag on social media sites like Facebook, Twitter and Instagram. They have used it when talking about Pitbull's music, but they also cite it while joking with friends or when in a festive mood, almost as punctuation or slang.

Olivia Coyne, 15, of Boston, doesn't speak Spanish, but she does speak Pitbull, especially on Twitter. Dale is "more than a catchphrase, it is inspirational," she says. "Just keep working hard and don't look back, keep looking at what is ahead."

Afshin Gholizade, 18, of Tehran, said he knows all of Pitbull's lyrics and likes to dress up like the bald rapper. "It means, 'let's go,'" says Gholizade, who also doesn't speak Spanish or have any ties to Latino culture, but uses #Dale frequently on Twitter. "I learned how to live in life from Pitbull."

To be sure, not everyone is a fan. Confusion about the word has also inspired a handful of "What does 'dale' mean?" inquiries on Google, Yahoo Answers and SpanishDict.com.

Dale, like so many words and expressions in Spanish, has a fluid definition that varies among countries and cultures. Pronounced "Dah-lay," it essentially means "give it" or "go ahead" in English. It can be a nod of encouragement or a forceful demand. It's also flirtatious, a warm coo of a sexual invitation. It has always been popular in Latino culture, but Pitbull has helped introduce it to a more mainstream audience.

In "The Anthem," one of his many risqué tracks, Pitbull and frequent collaborator Lil Jon call out "dale" more than 25 times in between shouts of "get nasty, get freaky, you sexy, you fine." In "Toma," Pitbull is even more direct. "Let me see you act like an animal straight out the cage, baby. Dale," he implores.

The softer side of Pitbull's dale repertoire can be found in 2011's "Give Me Everything," where Pitbull raps, "I can't promise tomorrow, but I promise tonight. Dale." He also gives dale the PG-13 treatment in "Feel This Moment," his ubiquitous collaboration with Christina Aguilera. "Oye, mamita, come on, dale," Pitbull spits, before noting that his global success has found him, "long ways from the hard ways."

Pitbull has widely embraced #DALE on his social media accounts. More recently, he used the hashtag while posting a picture of his honorary degree from the non-accredited Doral College in Florida. He also used #DALE on Instagram in a string of recent posts recapping his performance at the World Cup opening ceremony in Brazil.

The catchphrase has helped Pitbull stand out in a robust pop star market, said Jeetendr Sehdev, author of the upcoming book Superstar: The Art & Science of Celebrity Branding.

"Millennials like popular, uplifting messages that mean 'Yes.'" Sehdev says. (Think "YOLO.") "They may not understand it literally, but they understand it emotionally."

Dolores Inés Casillas, a Chicano studies professor at University of California, Santa Barbara, said she was excited when she first heard Pitbull use dale in his songs and later when his followers claimed the word on social media. Casillas said the trend reflects shifting demographics and the growing influence of Spanish speakers in the United States. But it also reminds her of home. Casillas is the daughter of Mexican immigrants and dale ganas, or "give it your all," was a frequent prod from her father.

"I think of it almost as this immigrant work ethic," Casillas says. "As soon as I saw dale as a hashtag, I was like, wow, something's working ... They are understanding a sentiment that's not easy to explain."

With his debonair suits, catchy beats and multicultural appeal, Pitbull has remained a relevant voice in the music industry for nearly a decade with a series of club bangers and musical collaborations that have helped broaden his fan base and appeal. The Cuban-American performer has teamed up with everyone from Jennifer Lopez to Ke$ha, and while his rhymes don't garner the same kind of respect as rappers Drake, Kendrick Lamar or Kanye West, his songs do very well on pop music charts and radio stations.

Pitbull first made a splash in music in 2004 with his catchy hit "Culo." There was not a dale to be found in that vulgar ode to romps, but the rapper made up for the oversight by liberally peppering the expression in nearly every subsequent song.

He is somewhat of an odd personality in the Latin crossover market because he isn't cut from the same heartthrob cloth as Enrique Iglesias or Ricky Martin, and he doesn't seem as artistic as big talents like Marc Anthony and Calle 13. He's closer to southern rapper Ludacris, the guy who gets la fiesta started and is in on the joke.

After Wal-Mart promised to send Pitbull to the store that got the most "likes" during a marketing contest on its Facebook page, the rapper's haters organized a viral campaign to send him to the most remote Wal-Mart possible using the hashtag #exilepitbull. Pitbull made the trip and tweeted: "I hear there's bear repellant at Kodiak, Alaska... daleeeeeee!"

A foreign word likely would have taken longer to become part of the mainstream lexicon in the past, but the nature of social media has quickly allowed dale to make a notable impact in part because of Pitbull's many bilingual fans, said Tomas Gomez-Arias, a global branding expert at Saint Mary's College of California.

"They can take the best of both languages," he says. "The expression takes a life of its own."

Gomez-Arias, a native of Spain, said he grew up with dale as a popular colloquialism. It's become a symbol of affection, he says, but he isn't sure whether dale will one day experience the same worldwide appeal Pitbull has enjoyed.

"I would be surprised to hear Celine Dion say it," he says.