Accessibility links
Controversy Over Sofía Vergara Obscures An Industry's Failings : Code Switch When the Colombian actress appeared in a widely derided stunt at the Emmys, much of the attendant outrage centered on her very prominent image. Juan Vidal argues this lets Hollywood off the hook.

After Sofía Vergara's controversial appearance at the 2014 Emmy Awards, we wanted to see more perspectives exploring the cultural dimensions of the controversy. Make sure to read Daisy Hernandez's reaction. Here's a response from contributor Juan Vidal.

Sofía Vergara spun on a pedestal Monday night at the 2014 Emmy Awards, and social media exploded. Many called it a sexist, disgusting and completely offensive antic that again reduced a beautiful woman to a product for public display. People used clever hashtags to emphasize their anger. They published status updates in hopes of engaging others in a righteous stance against what they deemed cheap, sordid entertainment. 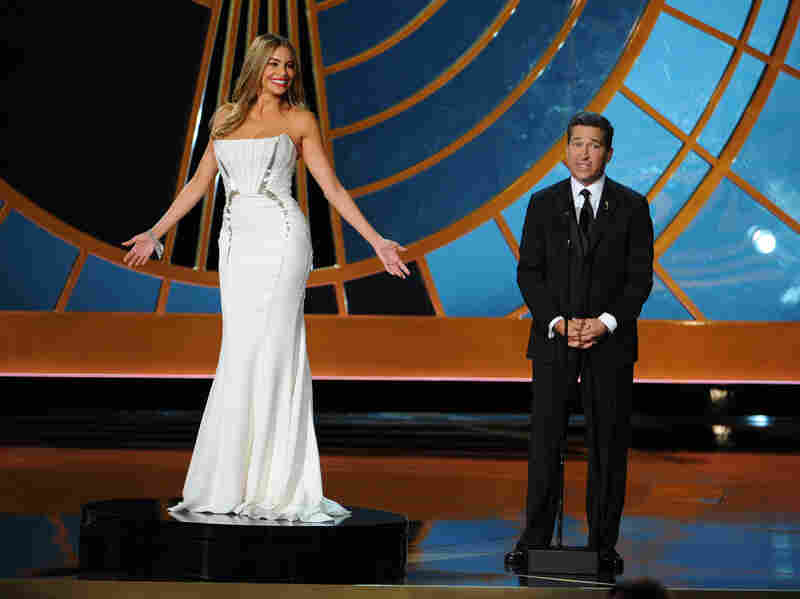 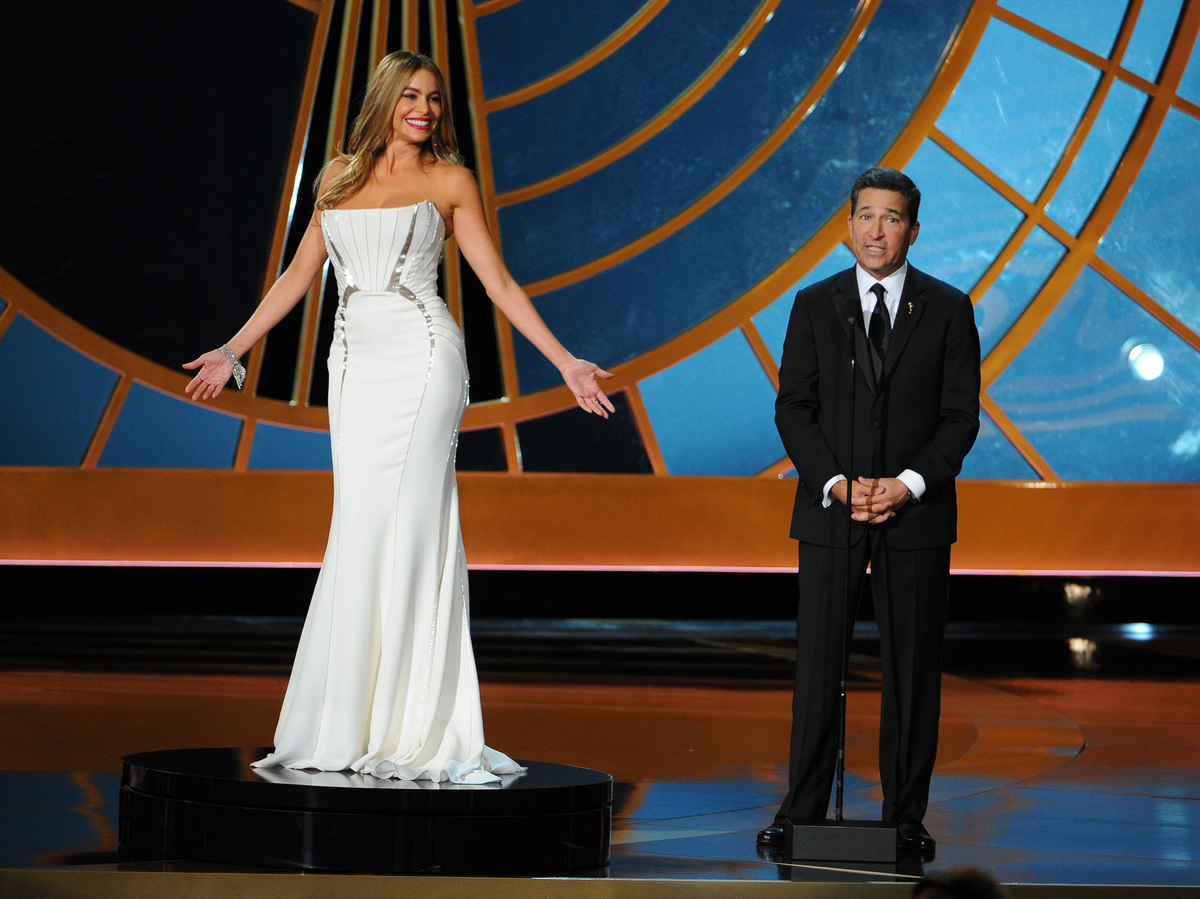 For some, it served as an an opportunity to exercise their selective outrage, a natural desire to sing our frustrations from the rooftops. For others, it was a despicable trick that further proved the narrow-mindedness of Hollywood.

I called my mother for her perspective — a lovely Colombian woman in her 50s who, at her job, is sometimes jokingly referred to as "Sofía." Although Sofía Vergara's talk is significantly more piercing and exaggerated, the two have similar speech patterns. "She is a gorgeous woman and this was nothing offensive and everyone needs to chill out," my mother said.

Vergara is an actress and model by profession. For more than 20 years, she's made a living flaunting her smile and flawless figure. She's also quite funny, often stealing entire scenes on account of her quirky and undeniable wit. Her endearing accent, a somewhat running nonjoke in Modern Family's overall framework, has elicited laughs and reactions from viewers. As far as Vergara is concerned, what she did onstage — that whole spin around like a trophy while you wiggle your moneymaker routine — was an extension of Gloria Delgado-Pritchett, the character Vergara has worked to build. It's like she never broke character, for better or worse.

Since the very start, her role in Modern Family has perpetuated certain stereotypes about Latin women — they are sexy, strong and opinionated. Many have an affinity for tiny skirts and low-cut tops. But it's not just Modern Family that points to these things — a recent study by the University of Southern California's Annenberg School for Communications and Journalism revealed that "less than 5 percent of actors in top Hollywood films are Hispanic, and that Latinas are more likely than women of any other ethnicity to appear partially or totally naked on-screen."

During Vergara's stunt, those in attendance at the Emmys seemed to revel in her ever-present allure. But those watching from home got pissed. Tempers began flaring and you could hear journalists everywhere cracking open their laptops. After Katie Couric tweeted, "I love @SofiaVergara but did anyone find that schtick somewhat offensive?" Vergara herself had this to say:

"I think it's absolutely the opposite. It means that somebody can be hot and also be funny and make fun of herself and enjoy and work and make money. So I absolutely think it's ridiculous and somebody who started – and I know who she was — has no sense of humor and should lighten up a little bit."

"Katie Couric is being a jealous gringa and so many people are getting mad about nothing," my mother offered.

My mother's response illustrates one perspective on feminism. Like Vergara, she comes from a different school of thought than Couric, one that finds power in good looks and sexual appeal.

Susanne Ramirez de Arellano, whose Latino Rebels piece was by far the most affecting I read on the issue, offered me this via email:

"As a Latina, I own my sexuality. Another thing, however, is for someone else to own it. I don't blame Sofía Vergara for her sexuality as she is just doing what sells. What I do find fault in is that she is participating in the perpetuation of a distortion of what it means to be a Latina, making it a caricature. That sticks in my throat. The stunt would have worked better without the rotating podium, and done like a Groucho Marx skit."

It's true that the Emmys, and Hollywood more broadly, have failed considerably at depicting women — particularly Latinas — as fleshed-out human beings, not merely as flesh. And although Vergara is not to blame, she's a prominent example of the utter one-sidedness of how the industry depicts Latin women.

But as one of the few prominent Latinas on television, when Vergara chooses to flex her muscle in ways that are reflective of her own sense of control as a woman and a professional, should she be directly rebuked for it?

Drama aside, Modern Family took home its fifth award for outstanding comedy series. Sofía Vergara will continue to be Sofia Vergara, the 32nd most powerful woman in media and entertainment, according to Forbes. Some will continue to grow angrier and angrier at how she flashes said power.