The United States Department of Labor recently published a report with a detailed breakdown of the different economic outcomes that various Asian-Americans and Pacific Islanders have faced.

As a group, the report points out, "AAPI workers have had more favorable economic outcomes than workers in any other racial group." But the report is a good reminder that each of the ethnic groups within the monolithic umbrella of "Asian-Americans" is vastly different, with varying financial circumstances and degrees of educational attainment. 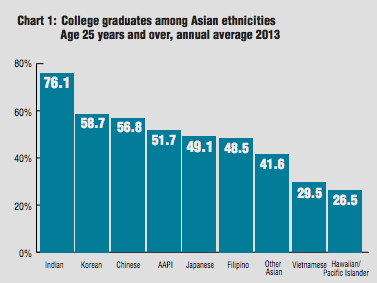 According to the report, "53.4 percent of Asians over the age of 25 have a bachelor's degree or higher." Bureau of Labor Statistics, Current Population Survey hide caption

This report is a follow-up to a similar report from 2011. While some of the 2011 report's findings were widely reported, a few of the details in this more recent update stuck out to us (emphasis ours):

• "Overall, 53.4 percent of Asians over the age of 25 have a bachelor's degree or higher — the highest percentage by far among the major race groups."

• "The AAPI community has the second highest share of unemployed workers who are long-term unemployed (41.7 percent) ... Asian Americans who are unemployed, are without work for longer than whites and Hispanics."

• "When controlled for age, sex and educational attainment, unemployment rate for Indians is actually higher than comparable whites. This difference suggests that the Indian community as a whole tends to be more educated, but when looking at similarly situated white workers, their employment outcomes are less favorable."

• "More Filipino women are employed (57.1 percent) than any other community; Indians had the smallest share of employed women (36.8 percent.)" 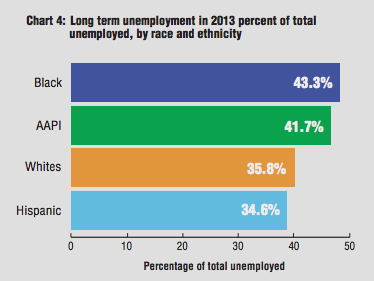 • "Like other predominantly immigrant groups, members of the AAPI community also tend to have a lower median age than the overall population (Asian 33.6, Pacific Islanders 27.4, and U.S. overall 37.6)."

• "Within the AAPI community, the Vietnamese, 'Other Asian,' and Chinese groups have the highest percentage of high school dropouts (29.3, 22.3 and 18.4 percent respectively) and all have a higher percentage than the white community (13.0 percent). On the other hand, the Japanese, Korean, and Filipino groups have the lowest percentage of members with less than a high school diploma (4.8, 7.1, and 7.4 percent respectively)."