Accessibility links
Is Corporal Punishment Abuse? Why That's A Loaded Question : Code Switch An NFL star's indictment on child abuse charges has reignited a national debate about parents using corporal punishment. But how people feel about this issue is tied to some very personal questions.

Over the past week, Adrian Peterson, the Minnesota Vikings' all-world running back and one of the NFL's biggest stars, has become the face of corporal punishment in America. Peterson turned himself in to police over the weekend on charges of child abuse after he allegedly hit his son with a switch that left welts on his body.

Needless to say, people feel very differently about this subject. "I'm a black guy ... I'm from the South," Charles Barkley, the former NBA star, told a panel on CBS' NFL Today. "Whipping — we do that all the time. Every black parent in the South is going to be in jail under those circumstances." 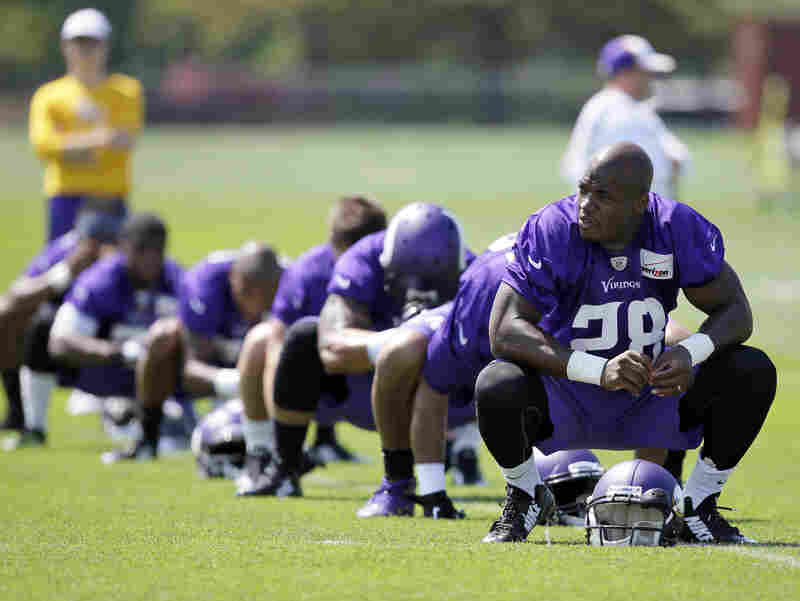 Adrian Peterson (right) was ordered to stay away from his team, the Minnesota Vikings, while he addresses child abuse charges in Texas. Charlie Neibergall/AP hide caption 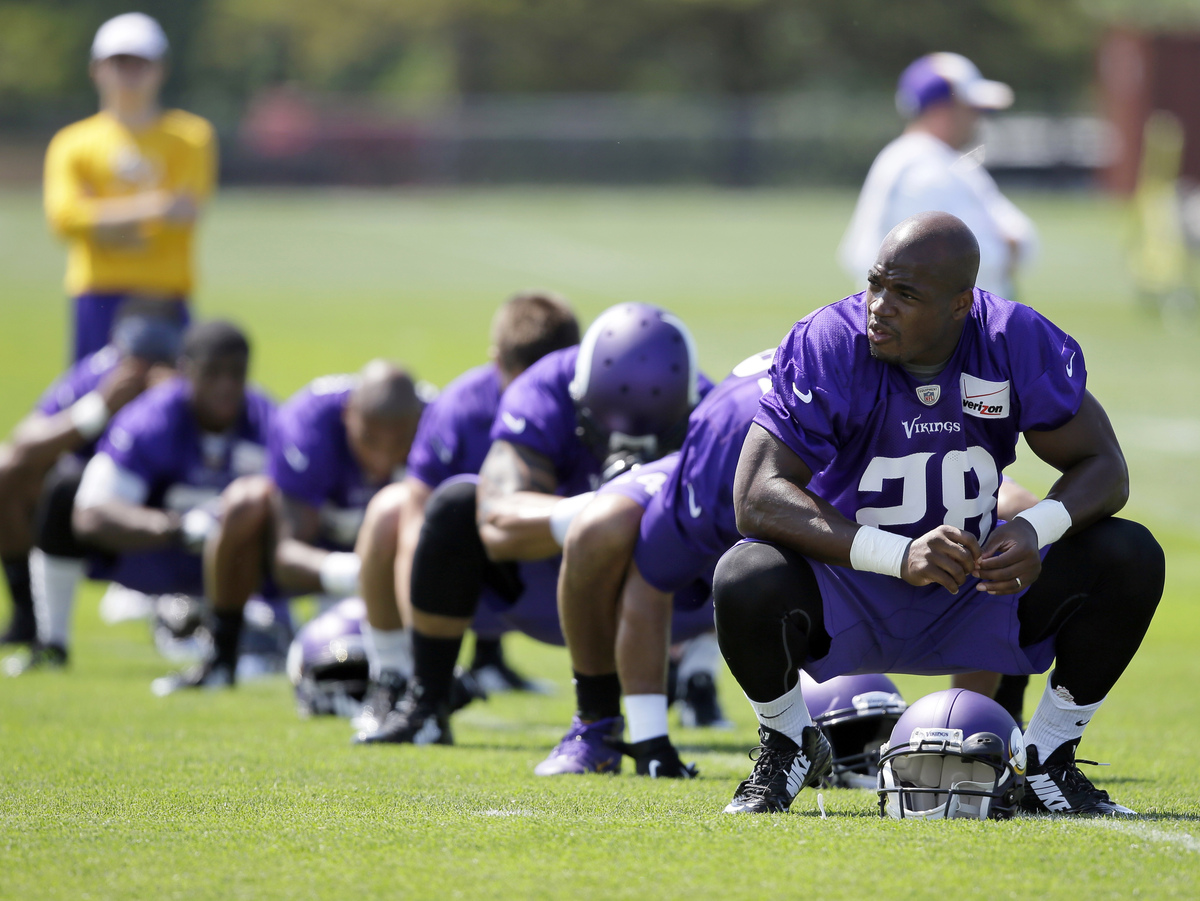 Adrian Peterson (right) was ordered to stay away from his team, the Minnesota Vikings, while he addresses child abuse charges in Texas.

Meanwhile, a visibly emotional Chris Carter, who once starred for the Vikings, argued on ESPN's NFL Countdown that corporal discipline was outdated and wasn't solely the province of black folks. "This goes across all racial lines, ethnicities, religious backgrounds," Carter said. "People believe in disciplining their children. ... It's the 21st century. My mom was wrong. She did the best she could, but she was wrong about some of that stuff she taught me. And I promised my kids I won't teach that mess to them. You can't beat a kid to make them do what they wanna do."

It's not just the practice of corporal punishment that's contested. Even the words we use are at issue. When I asked folks on Twitter who were physically disciplined as children how they felt about it as adults, I kept fussing with the wording. For lots of folks, "spanking," "whupping" and "beating" are simply colloquialisms that refer to the same kinds of behaviors. But "Were you beaten by your parents?" sounds like a different and more loaded question than "Were you spanked or whupped by your parents?" (Barkley, for one, pointedly criticized the use of the word "beating" in media discussions of the Peterson story.) Some folks even have personal taxonomy for the severity of corporal punishment — whereas "spanking" might be a swat on the rear or arm, a "whupping" or "beating" might involve a belt or switch or some other instrument.

Whatever language folks employ, very few people who use corporal punishment tend to think of themselves as "child abusers," which underscores just why it's so hard to talk about child abuse. ("Child abuser" is like "racist" that way.) Many of my respondents said they so deeply disliked their parents' approach to corporal punishment that they could not countenance physically disciplining their own kids. Yet many of those same people also very pointedly said they would never characterize their own childhood punishments as "abuse."

"I think there's a fine line [between punishment and abuse]," Barkley said. But everyone seems to set that line in different places. There's a bit of the Potter Stewart test in how we think about child abuse: It's not easy to define, but we know it when we see it.

When discussing corporal punishment among black people, people often say that "whuppings" are a kind of atavism from slavery. Michael Eric Dyson of Georgetown wrote as much in a New York Times op-ed this week.

"The lash of the plantation overseer fell heavily on children to whip them into fear of white authority. Terror in the field often gave way to parents beating black children in the shack, or at times in the presence of the slave owner in forced cooperation to break a rebellious child's spirit. Black parents beat their children to keep them from misbehaving in the eyes of whites who had the power to send black youth to their deaths for the slightest offense. Today, many black parents fear that a loose tongue or flash of temper could get their child killed by a trigger-happy cop. They would rather beat their offspring than bury them."

Elizabeth Gershoff, a sociologist at the University of Texas, Austin, told NPR's Robert Siegel that African-American parents spank more frequently than other groups, but three-quarters of parents spank their children at least once a year.

Changing Mores About Childhood And Punishment

While those numbers are pretty strongly pro-spanking, the polls show that support for the practice has been on a very slow decline for a while across all groups. That's probably not too surprising — the idea of not spanking is actually a historically novel idea, and many of our modern conventions of childhood have come into shape over the past 150 years or so. Families used to have many more children, and those children were put to work in farms, and later in factories. As infant mortality fell and life expectancies started ticking steadily upward, people began to think of childhood as a discrete developmental period that should involve nurturing and protection. The first child labor laws didn't go on the books until the mid-1800s. Government-sponsored child protection services in the U.S. didn't spread in earnest until the 1960s.

If we've just begun thinking about not spanking, we've also just begun to consider the implications of it. Is spanking harmful? Does not spanking hurt kids? There's been reams of research on these questions over the past half-century or so, and much of it is hotly contested. In 2002, Gershoff reviewed nearly 90 studies about corporal punishment published over more than six decades. She looked for links between childhood corporal punishment and a range of different child behaviors and experiences, like moral internalization, mental health, aggression and criminal or antisocial behavior.

Gershoff also wrote that studying the real effects of corporal punishment requires making a distinction between corporal punishment and abuse. Again, that's a hard ask: Parents report on their own tactics in these studies, and they're using different cues about social norms to decide where to draw the line.

Of course, any possible consequences of spanking (or not) butt up against all of parenthood's more immediate considerations and compromises. Should you spank your 3-year-old for darting out into the street? Will time-out help your kid internalize what he's done to warrant that punishment? These are the kinds of questions that folks grapple with day to day. If there are any long-term effects for a given child on how a parent chooses to answer that question, they might not be apparent until much, much later.

Our feelings on corporal punishment are inextricably tied to how we were raised. The hundreds of responses I got on Twitter were incredibly varied.

I got beatings, and I turned out fine. The world would be better off if more people got whippings as children.

I got beatings, and it's a big part of the reason I'm estranged from my parents today.

I didn't get beatings because I was quiet and well-behaved. My brother got beatings a lot because he was unruly. There's a lot of lingering resentment between us today.

My parents felt like I was judging their parenting when I opted not to whip my own children.

Our feelings on corporal punishment are very much wrapped up in how we feel about our childhoods and our parents. These are stories that are fundamental to the ways we think of ourselves. But we also often view the way other people answer this question through the prism of our own experiences.

When we talk about disciplining children, we're also considering the very specific children in front of us with their own habits and inclinations. We're trying to determine what we think they might need in a given moment — to quit or keep doing that thing they're doing, to be quiet, to be heard. We treat our own histories and outcomes as the definitive study of parenting, and we bring that study's conclusion to our own kids.

Or, as one presumable parent on Reddit quipped: "I'm eight years into a decades-long study of this with three research subjects. I'll try to keep you updated when I have results."

UPDATE: Alright, gang. The comments for this post got out of control, so we're shutting them down.