Accessibility links
A Forgotten Referendum On The Union Of Scots And English : Code Switch In 2011, there was a vote on closing the version of Wikipedia written in the Scottish language variety, Scots. The episode reminds us how language intersects with politics and class.

A Forgotten Referendum On The Union Of Scots And English

A Forgotten Referendum On The Union Of Scots And English

Last week, residents of Scotland voted not to break away from the U.K. in a much-anticipated referendum on Scottish independence. For those of us with a special fascination with culture and language, the vote called to mind another much-less-heralded referendum on Scottish independence that happened three short years ago. In this case, though, the verdict went the other way.

On August 21, 2011, a Wikipedian with the username Chzz proposed the deletion of the version of the encyclopedia written in Scots, calling the Scottish-language Wikipedia a "joke project," unworthy of the Wikipedia community's resources.

Scots, Chzz argued, "isn't a real language; it's English, written in a semblance of a specific pronounced dialect." What next, the user went on to ask, a Wikipedia in Cockney? 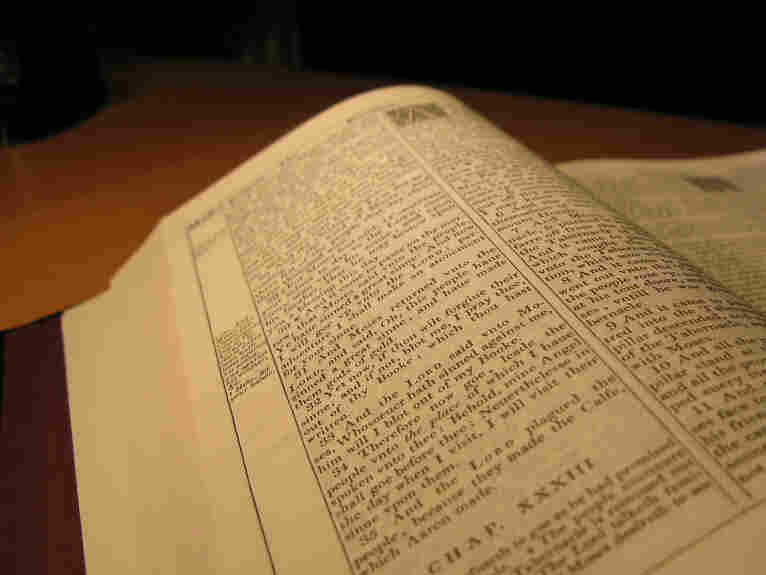 The publication of the King James Bible was among the events that diminished Scots' standing as a literary tongue in Scotland. Jemimus/Flickr hide caption 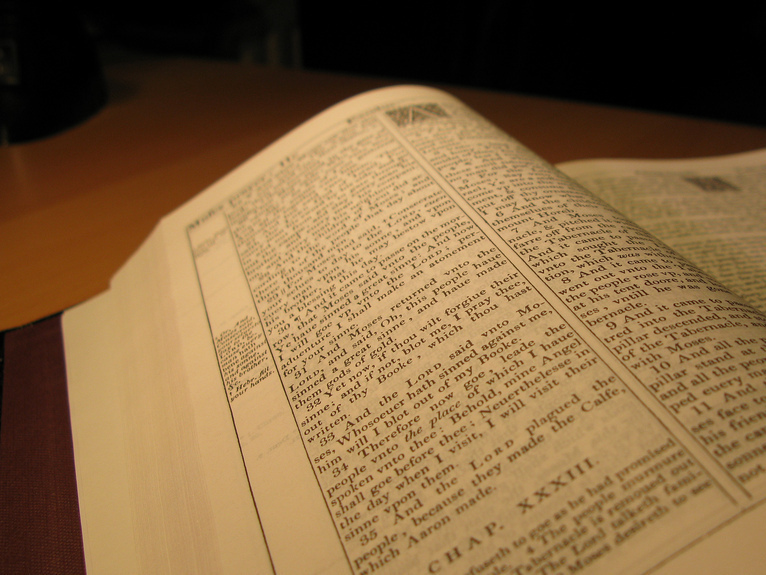 The publication of the King James Bible was among the events that diminished Scots' standing as a literary tongue in Scotland.

Chzz's proposal was met almost instantly with vociferous opposition. "It's a real language with 200,000 native speakers," wrote user Ron Ritzman. A user named Seb az86556 spoke up in ironic support of the proposal, adding, "And close French wikipedia as a barbarous Latin spoken by savages."

The opposition won out handily, and the Scots Wikipedia remains independent of its English-language cousin. "Walcome tae Wikipaedia," says the greeting on the site, "the free encyclopaedia that awbody can eedit."

Linguists would recognize the battle over Scots as another in a long line of skirmishes about language that are far more political than linguistic. Here in the U.S., for example, witness the constant skirmishes over African-American Vernacular English. My colleague Gene Demby reminded me of the widely-quoted adage: "A language is a dialect with an army and a navy." And like those battles over AAVE, the dispute over Scots is laden with matters of politics and socioeconomics.

As the snippet of written Scots from Wikipedia suggests, much of written Scots is intelligible to readers of English. If you're unfamiliar with the language variety, go ahead, click around the site for a minute. (Try this featured article on the assassination attempt on former President Ronald Reagan, for example.) Chances are you'll be able to parse a good amount of it, and it may even strike you as a transcription of Scottish-accented English. ("Scottish people are quite able to use the English Wikipedia with proper spelling," said a Wikipedian in support of closing the Scots Wikipedia, "instead of trying to capture their accents through phonetic transcription.")

There are good reasons why written Scots gives this impression, but to understand them, you'll have to understand a little of the history of Scots.

Linguists would recognize the battle over Scots as another in a long line of skirmishes about language that are far more political than linguistic.

According to the Dictionary of the Scots Language, Scots grew up alongside Middle English, both tongues borrowing from a common grandparent, Old English. As writing and literature spread in the Middle Ages, Scots flourished, becoming the language of poets as well as the language of the Scottish government.

Then, in 1603, Scotland's King James VI inherited the throne of England from his late cousin, Queen Elizabeth I.

Now King James I, Scotland's monarch moved from Edinburgh to London, making grand pronouncements about his desire to lead a unified kingdom. "I am the husband and the whole isle is my lawful wife," he wrote. "I hope therefore that no man will think that I, a Christian King under the Gospel, should be a polygamist and husband to two wives." His royal treatises, once written in Scots, began to be written in English.

The Scots-writing gentry and literati, sensing the way the wind was blowing, started writing in English as well. The Scottish government followed suit. Wealthier folks sent their kids to be educated in English.

Among ordinary folks in Scotland, the hegemony of English would be cemented by the project King James launched the year after he took office: commissioning the English version of the Bible that would become one of history's most viral memes.

In 1643, the Dictionary of the Scots Language points out, you might have read this in the municipal records of the city of Aberdeen: "Janet Rany, spous to Sergant M'Gregor, wes convict and put in amerciament for draging doun among hir feit Issobell Walker be the hair, and for etling to strik the said Issobell with ane brasin pan." 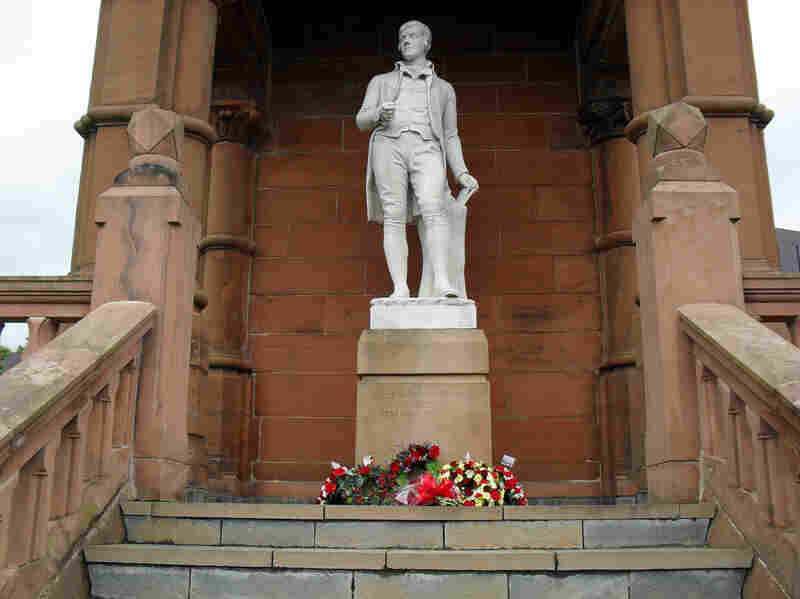 The poet Robert Burns was part of a vanguard rekindling the use of Scots in poetry and literature in the 18th century. summonedbyfells/Flickr hide caption 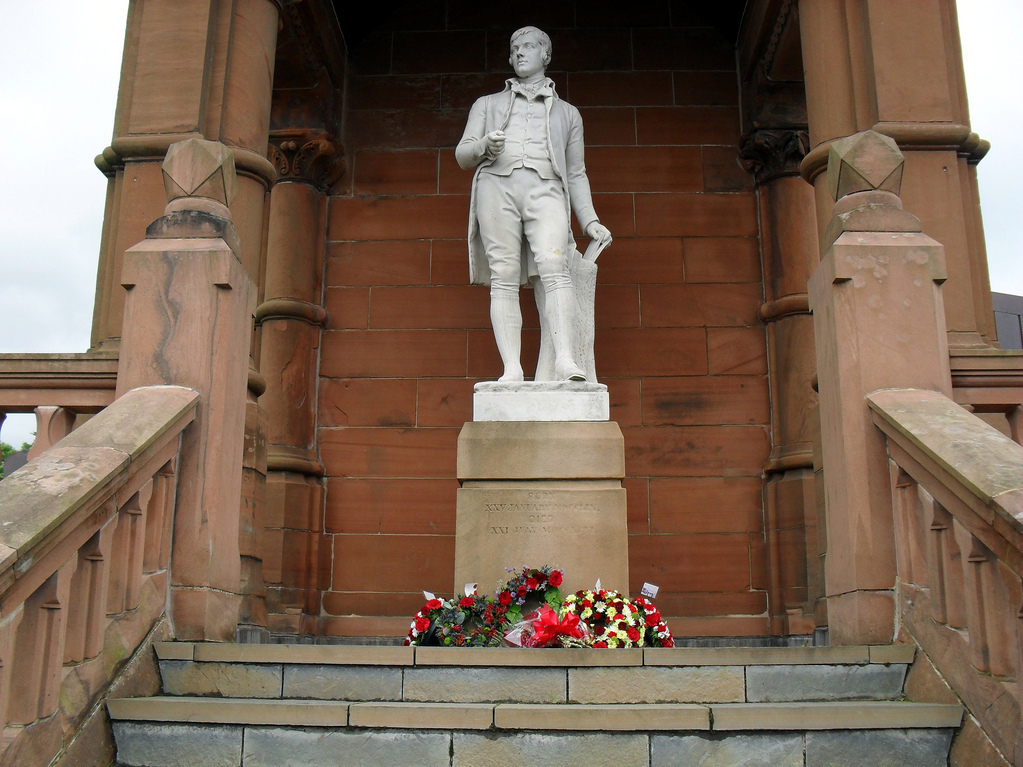 The poet Robert Burns was part of a vanguard rekindling the use of Scots in poetry and literature in the 18th century.

A century later, an entry in the same register would read more like this: "The said day, the magistrates and councill. . . considering that there is presently in agitation an union of the Kings and Marischal Colleges of Aberdeen, sett on foot by the principalls, professors, and masters of the tuo colleges."

"By the end of the 18th century," the Dictionary tells us, "English had supplanted Scots in fashionable circles, in the pulpit, the school, the University, the Law Courts and on the public platform."

During this time, however, while written Scots was suffering blow after blow, spoken Scots still had quite a lot going for it. Popular poems, songs and adages originated in Scots had great staying power. Even in the early 18th century, the Dictionary points out, Scottish people of every class spoke Scots.

In the late 1700s, a succession of writers led by Allan Ramsay rekindled a literary movement in Scots. But the choices Ramsay and others made in writing verse in Scots had the effect of bringing the written language closer to English, such as changing older spellings like "schake" and "thocht" into English-friendly transliterations like "shake" and "thought." Real differences in oral pronunciation persisted, while more and more written commonalities crept in.

This pattern is part of why many report that spoken Scots is so much harder to comprehend than written Scots. Give this video a whirl, for example.

In 2010, the year before the referendum on closing the Scots Wikipedia, the Scottish government surveyed Scotland's adult population about perceptions and attitudes concerning Scots. The large majority of respondents — 85 percent — said they spoke Scots, with 43 percent saying they did so fairly often, mostly in social settings or at home, rather than at work or when out and about. Most of the respondents — 64 percent — said they didn't think of Scots as a "language," but rather as "just a way of speaking." Only 16 percent of respondents said they wrote in Scots with any frequency; 83 percent of people said they rarely or never used it in their writing.

But fans of Scots — written or spoken — can rest contented in one victory, three years ago. Scotland may not have voted to be an independent country, but Scots still has an encyclopedia of its own.