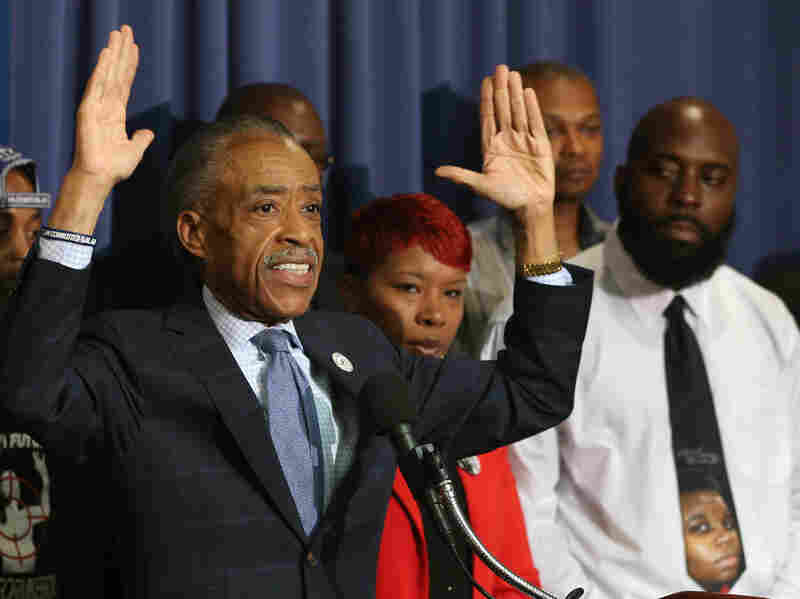 The Rev. Al Sharpton called Thursday for a federal review of racial violence and discrimination in the law enforcement community. He is flanked at the National Press Club in Washington by Lesley McSpadden and Michael Brown Sr., whose son was killed by police in Ferguson, Mo. Mark Wilson/Getty Images hide caption 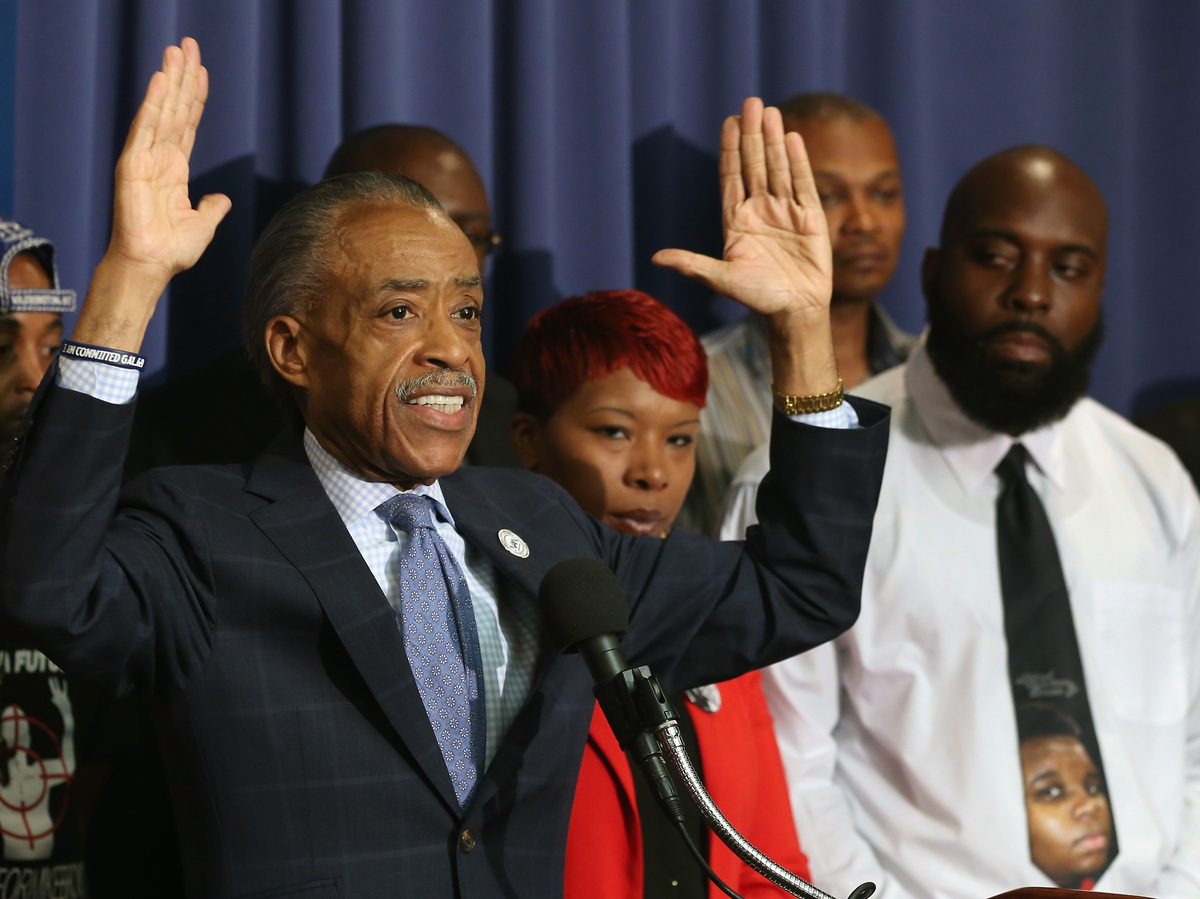 The Rev. Al Sharpton called Thursday for a federal review of racial violence and discrimination in the law enforcement community. He is flanked at the National Press Club in Washington by Lesley McSpadden and Michael Brown Sr., whose son was killed by police in Ferguson, Mo.

The families of Michael Brown, the 18-year-old who was shot last month by a police officer in Ferguson, Mo., and Eric Garner, who died in July after being placed in a chokehold by an officer in New York, called on the Justice Department to take the lead in the investigations into the two deaths.

"Our children might have made mistakes ... but the sentence wasn't death for selling cigarettes [or] for walking in the street," said Gwen Carr, Garner's mother.

Police attempted to arrest Garner for selling loose cigarettes, which is illegal in New York. The 43-year-old father of six died of a heart attack after being forced to the ground in a chokehold by Daniel Pantaleo, a plainclothes police officer in Staten Island.

Pantaleo, one of New York's most active officers, was placed on desk duty and stripped of his badge and gun. A Staten Island grand jury is slated to review his role in Garner's death this month; no charges have been filed.

Similar calls for Darren Wilson, the officer who shot and killed Brown, to be arrested have met with significant pushback. Wilson's supporters argue he was acting with what he thought was necessary deadly force, a judgment the Missouri Defense of Justification Statute empowers officers to make. Wilson is on paid administrative leave.

In today's press conference at the National Press Club in Washington, D.C., Benjamin Crump, the Brown family's lawyer, said consistent accounts of the shooting from seven witnesses who have since come forward should have been more than enough probable cause to arrest Wilson.

Ferguson Police Chief Thomas Jackson released a public apology via YouTube this morning extending his condolences to the Brown family.

"I'm truly sorry for the loss of your son. I'm also sorry that it took so long to remove Michael from the street," he said. "The time it took involved very important work on the part of investigators to gain a true picture of what happened that day, but it was just too long, and I am truly sorry for that."

The Rev. Al Sharpton, who also attended today's news conference, called the apology "too little, too late," adding the sensitivity and training measures often deployed after deaths like Garner's were not enough.

The St. Louis chapter of the NAACP is continuing to seek other possible witnesses to Brown's shooting.

NAACP President Cornell Brooks said at the news conference that his organization was releasing a report about the ways in which young people of color are "born suspect" and disproportionately experience life-threatening reactions from authorities.

"On the streets, our communities are presumed guilty until proven innocent," Brooks said.

The press conference followed news that Holder was stepping down. "If he is resigning, the civil rights community has lost the most effective attorney general," Sharpton said. 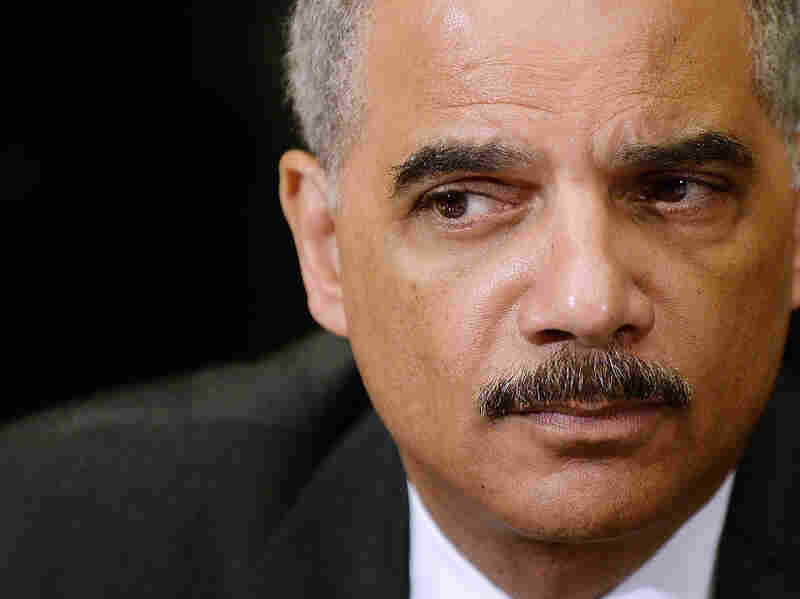 U.S. Attorney General Eric Holder attends a meeting with the My Brother's Keeper Task Force in May. He announced today that he is stepping down from his job. Olivier Douliery/Pool/Getty Images hide caption 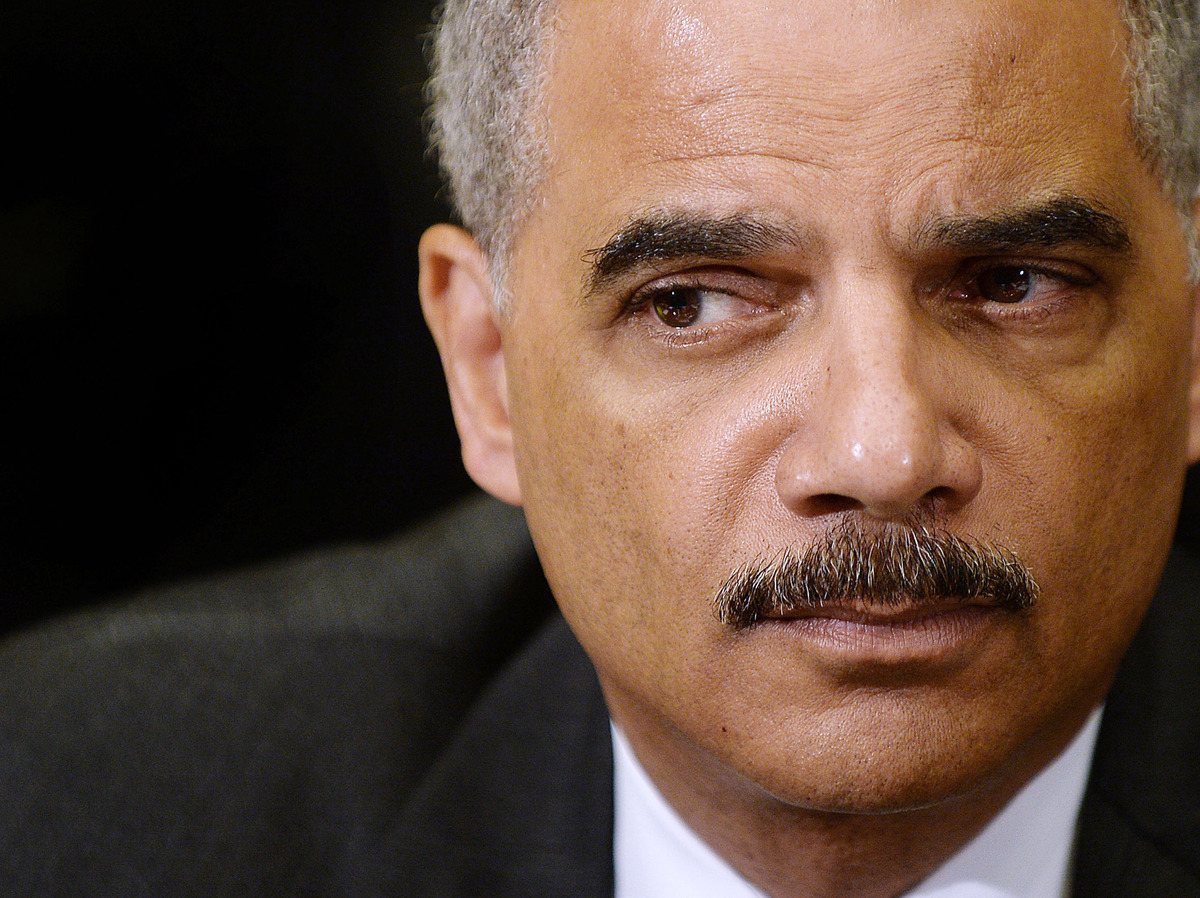 U.S. Attorney General Eric Holder attends a meeting with the My Brother's Keeper Task Force in May. He announced today that he is stepping down from his job.

In 2009, speaking to a Senate appropriations subcommittee, Holder said racial profiling was an inaccurate and destructive tool of law enforcement, and that he would crack down on it. Sharpton, Brooks and Crump called for a renewed push to pass the End Racial Profiling Act, legislation that would standardize and mandate collection of data on police-related killings.

Police officials in cities near Ferguson, Mo., have argued that a closer inspection of policing tactics are indeed necessary, but not to expose racial bias.

"If there's a violation, whether it's something as simple as ... an outstanding warrant or a traffic violation, there's a zero-tolerance policy," said Erich Von Almen, a sergeant in the St. Louis County Police Department. "The good citizens of the precinct that we patrol appreciate that, because it has had a very positive impact on crime stats."